The link will be alive by 9 am on Friday. The Rally will begin at 6 am on Saturday in Kingman. If all goes well I'll be home Sunday afternoon. I won't find out until tomorrow afternoon "where" I'll be going on Saturday but I'm not ruling out AZ, NM, CA, NV, UT, CO as possible bonus locations. I have no expectations of winning; I'll be happy just to finish on time.


The Rally (a scavenger hunt on 2 wheels):
https://rnrevents.weebly.com/kactus-kilo.html
Click to expand...

And... for anyone that just happens to be curious, here are my tracks for the past few years on various rides: https://spotwalla.com/publicTrips.php?un=Texas+T 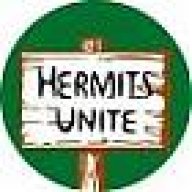 Loop complete & back to Kingman, I see. Trust all went well.

My route was counter-clockwise from Kingman. This shows the bonus locations I was chasing. Above the text in the upper left corner were two more bonuses I needed to complete a 3 bonus combo which would have doubled my score. I had enough gas to get there and get back to the intersection, but I did not have enough gas to get there and then all the way down to Tonopah to fill up. 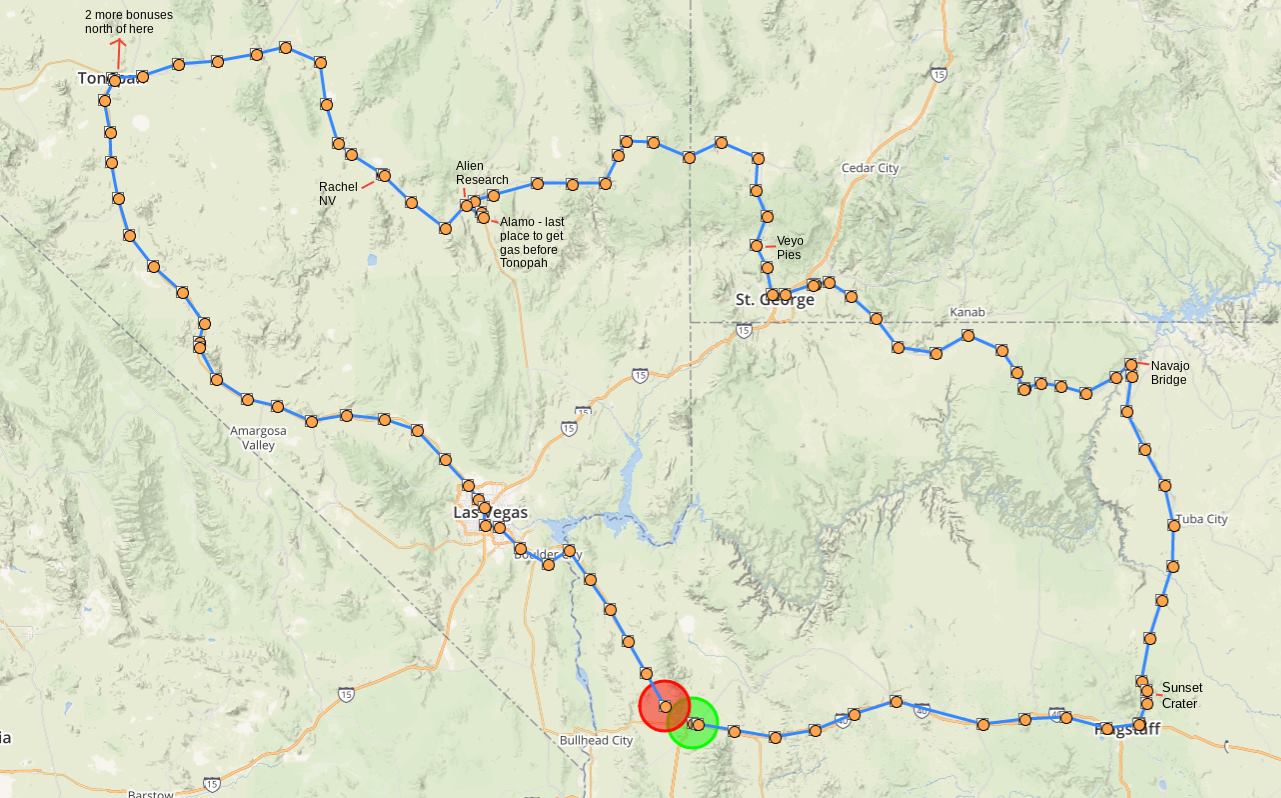 First up: Sunset Crater just north of Flagstaff. The requirement is to get your Rider Placard (on the top of the windshield), your motorcycle, and the target item in the picture. 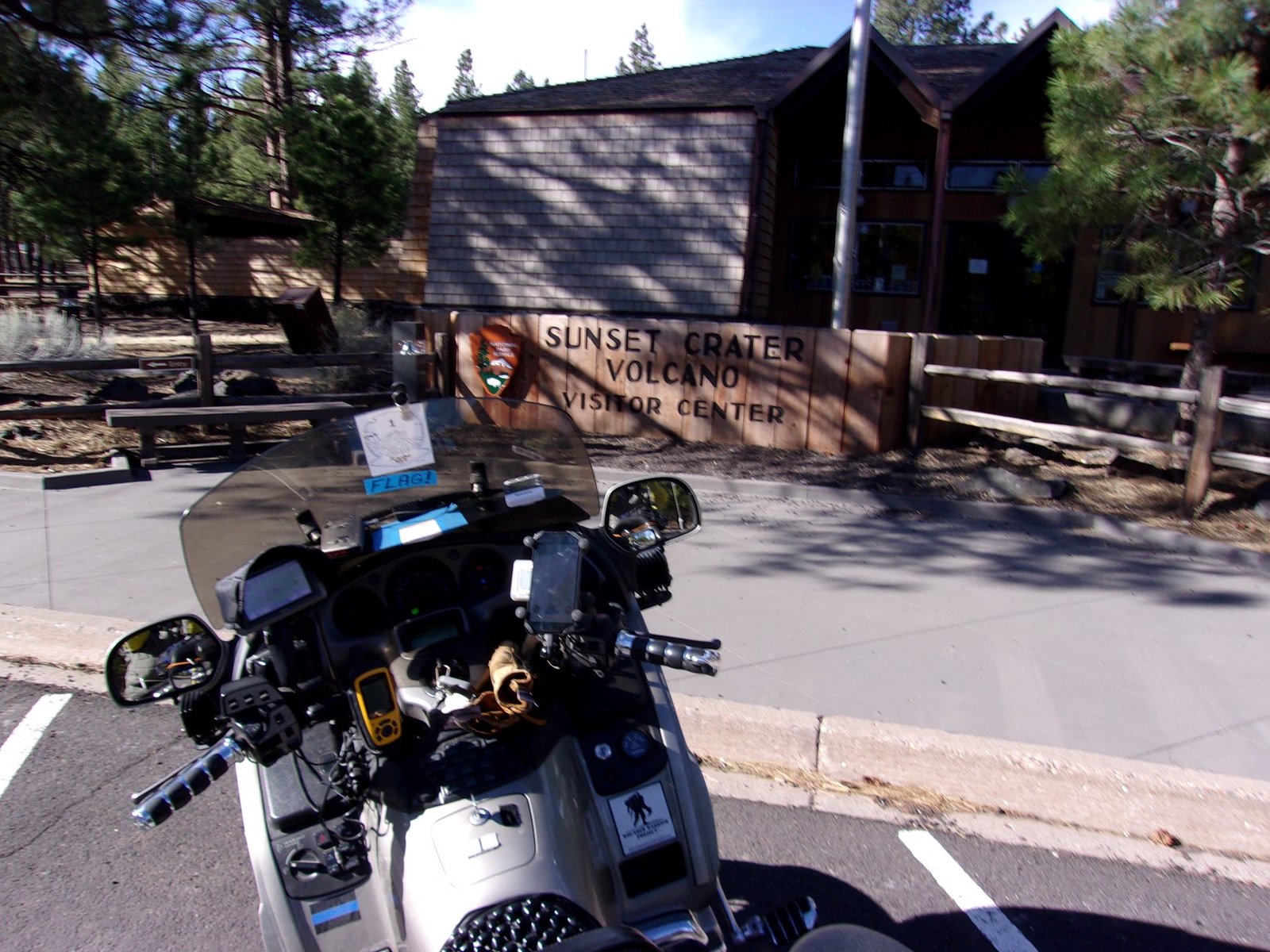 The mountains north of Flagstaff. 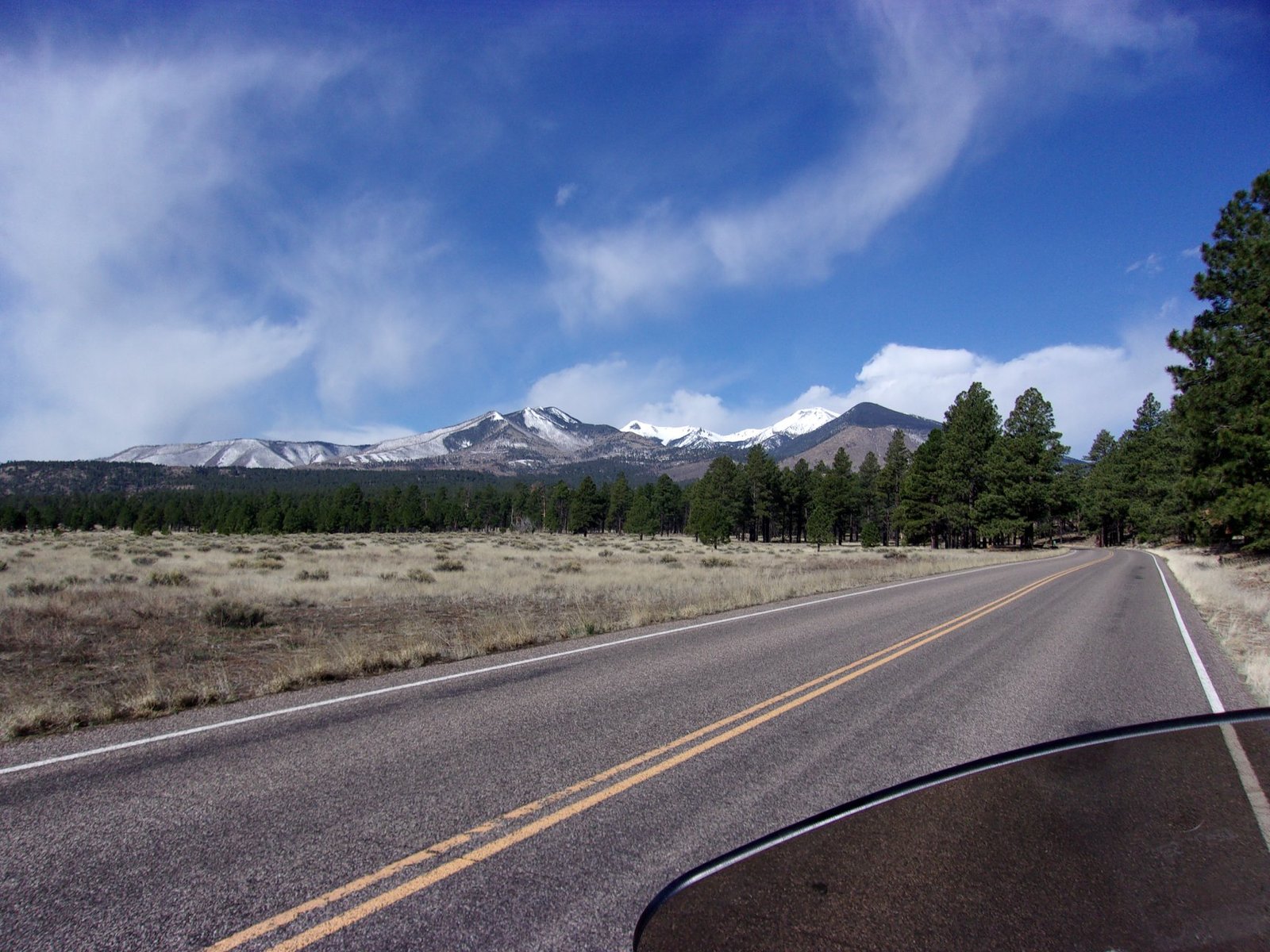 Next up, Navajo Bridge showing the two bridges. 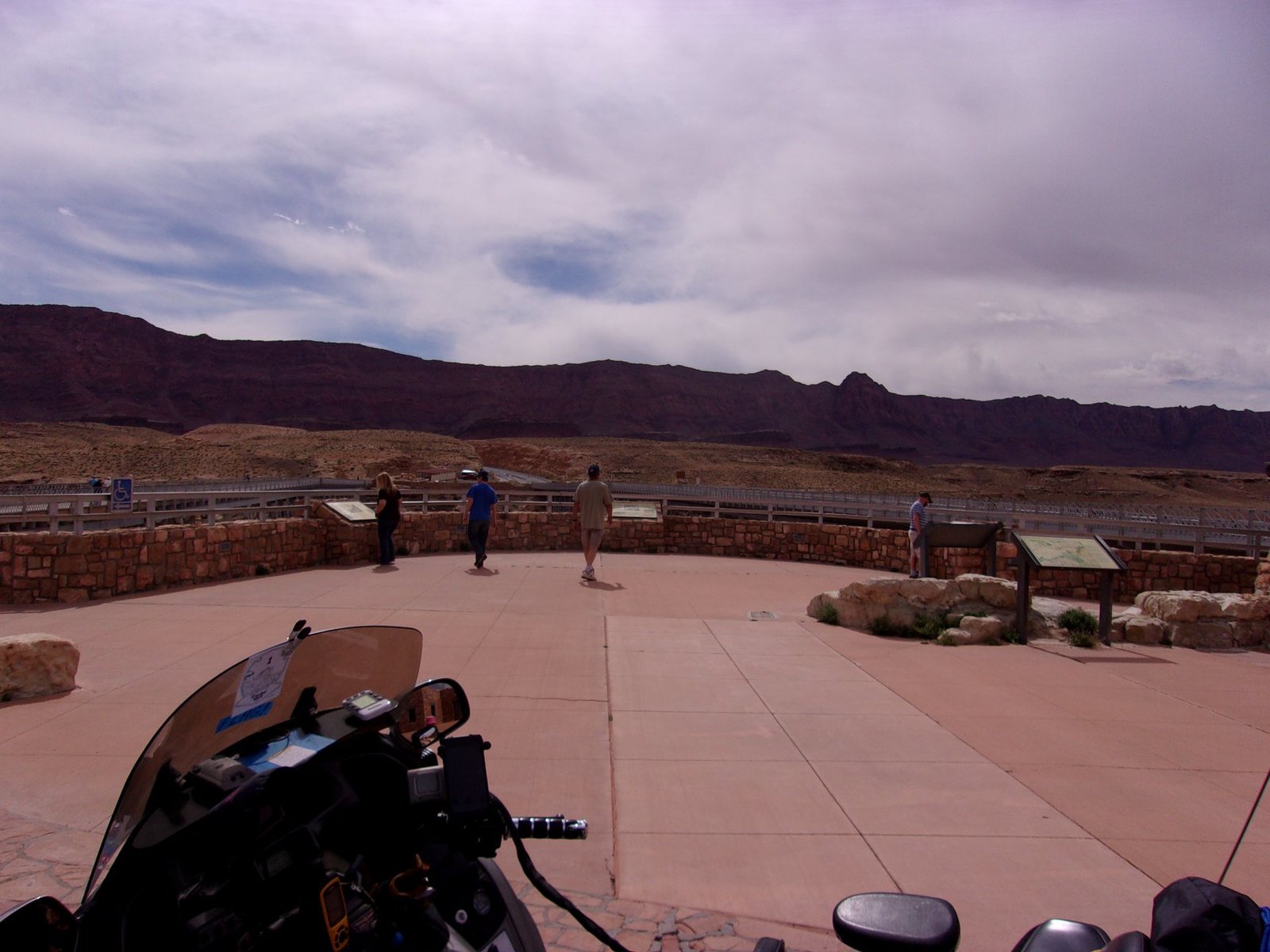 Sometimes a second photo is required to show the specific requirements of the bonus, in this case being able to show the old (on the left) and the new bridges in the same shot. 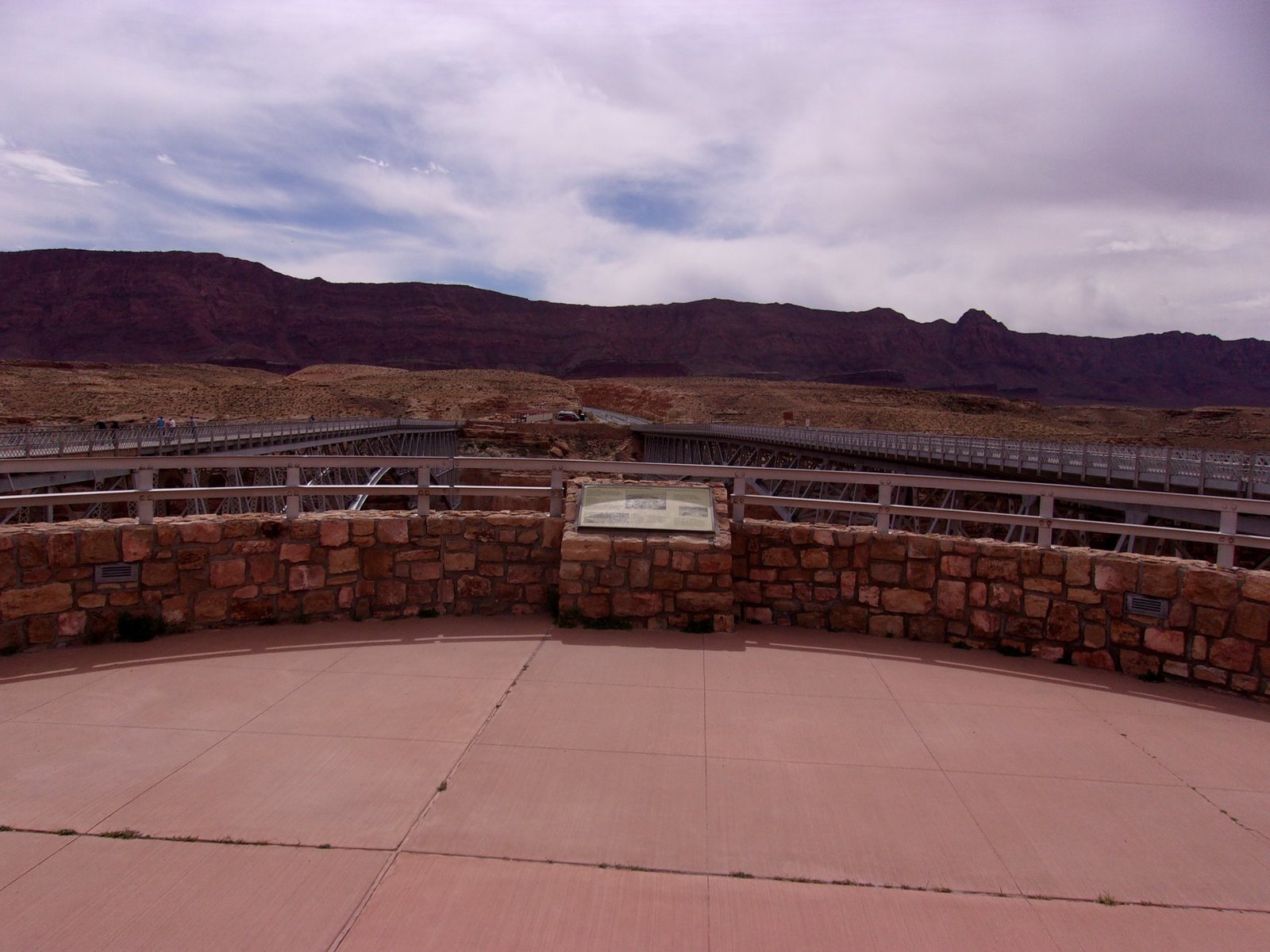 In each bathroom stall at Navajo Bridge they have this sign. It must work because the bathrooms were very nice. 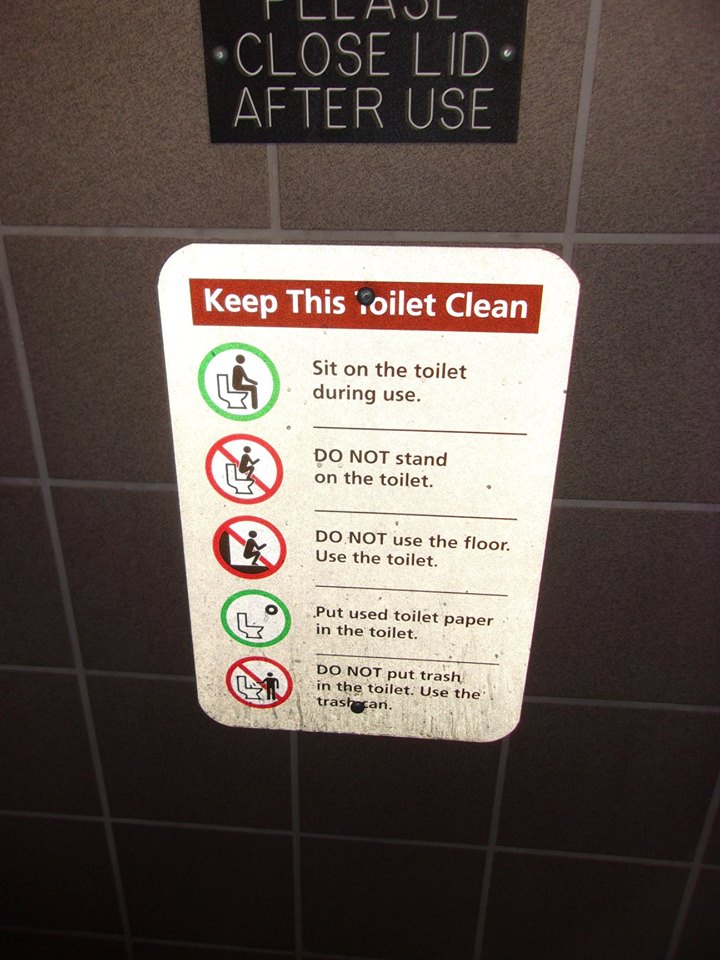 The road from Navajo Bridge to Jacob Lake is long and straight. Jacob Lake is in the area of that white section to the right of the road. To the far left you'll see the North Rim of the Grand Canyon still covered in snow. They won't open that road until a month from now. 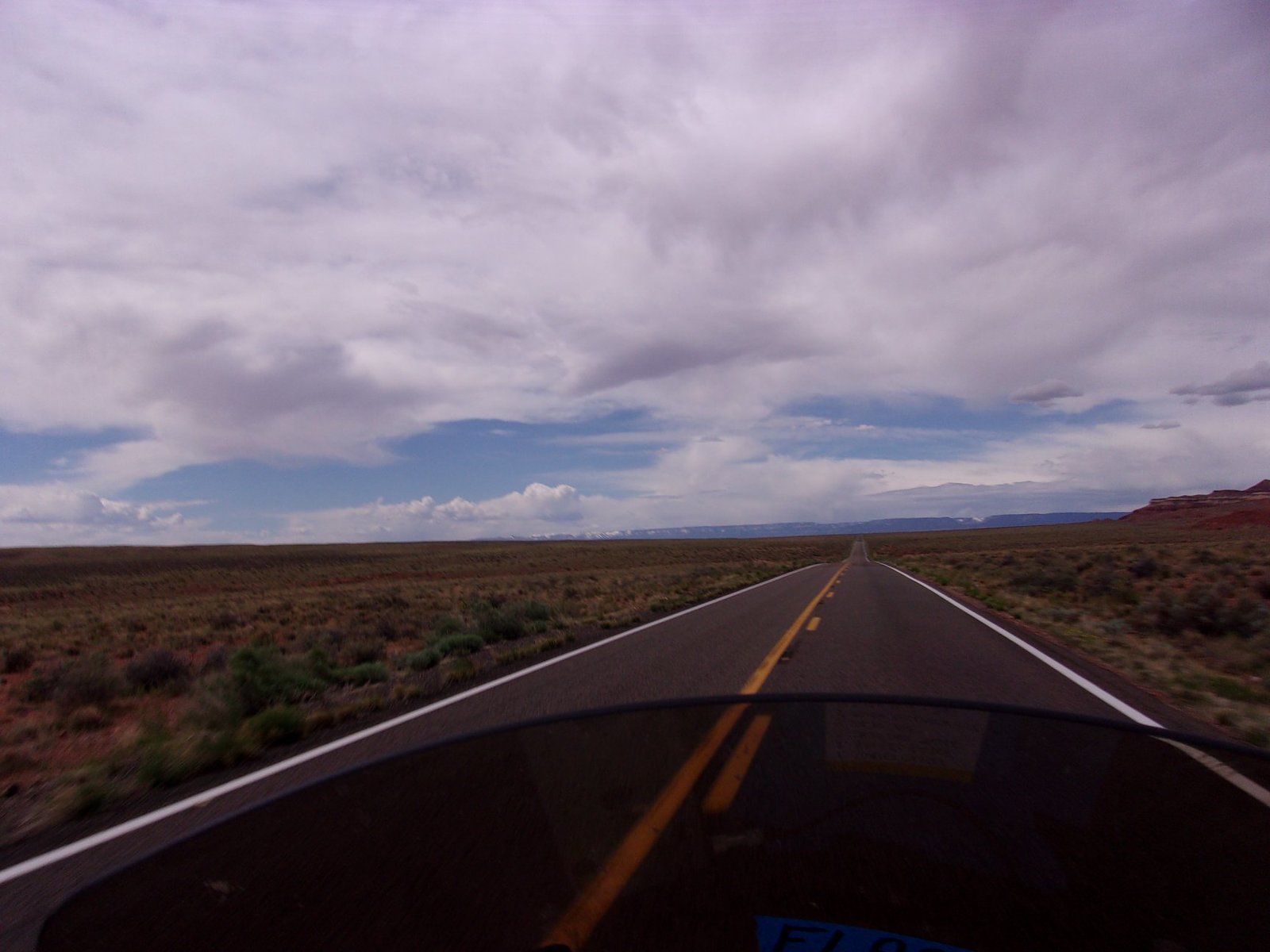 The Vermillion Cliffs run along the north side of the route almost until you start the climb to Jacob Lake. 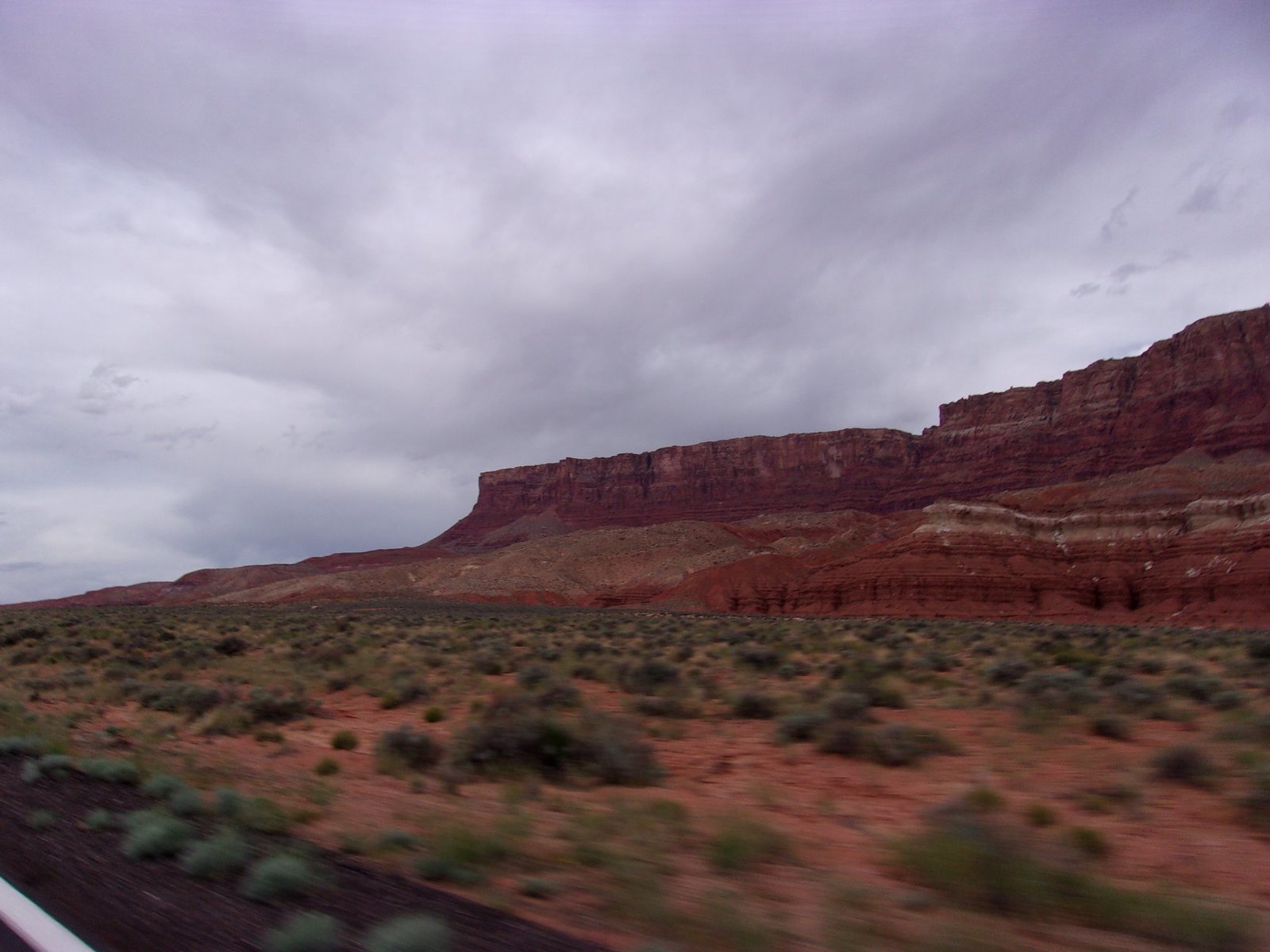 When I tried to reach the Lookout Tower at Jacob Lake I encountered this. The tower was only 1/2 mile beyond, but I had no way to get the Wing past the barricade. Yes, this is acceptable for a Rally bonus. I also took a photo of my GPS to show my exact location as support that I was there. 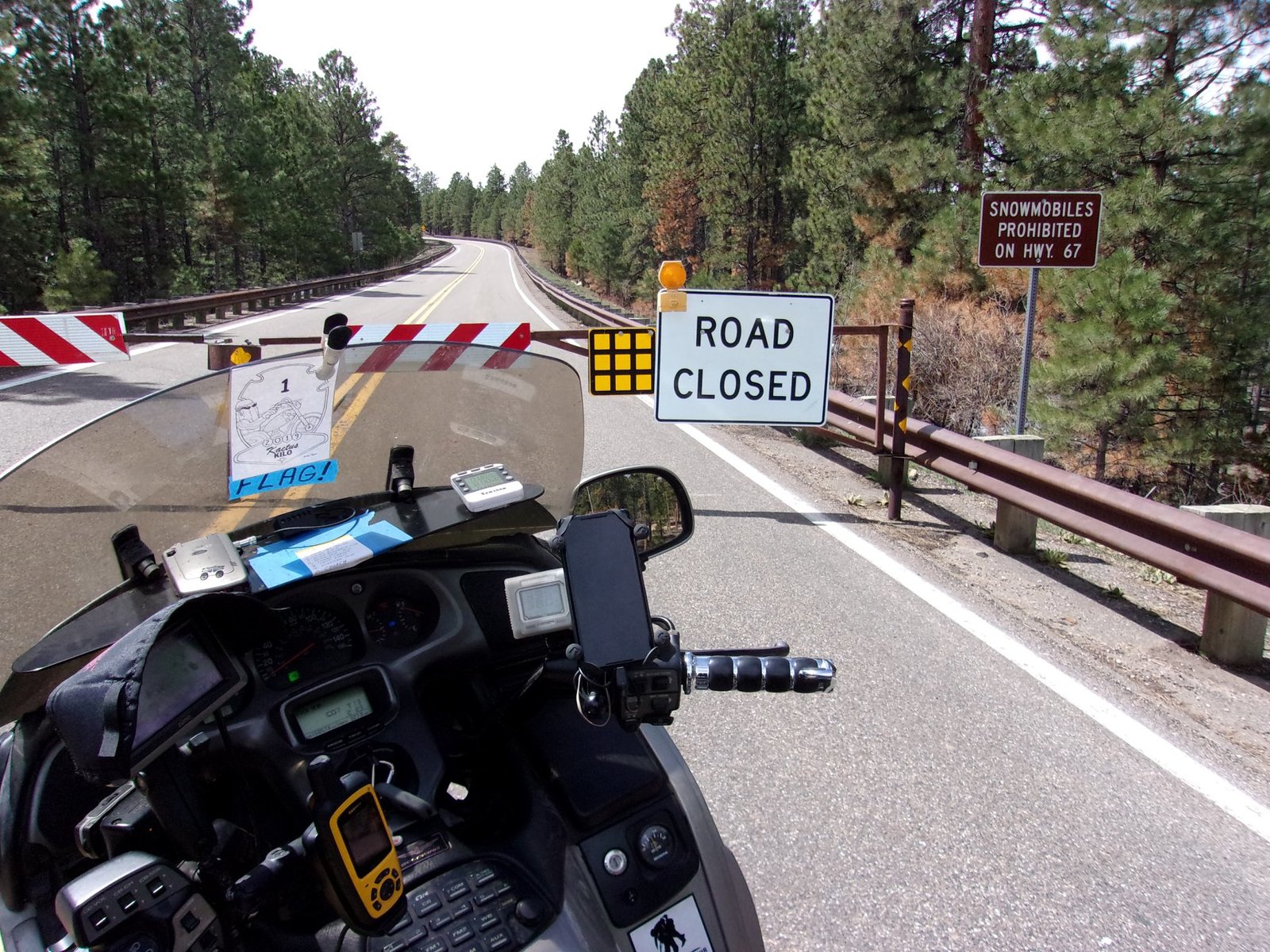 Leaving Jacob Lake and heading for Fredonia you come down the back side and you have a HUGE expanse of landscape to look at. Beautiful. The photo does not do it justice. 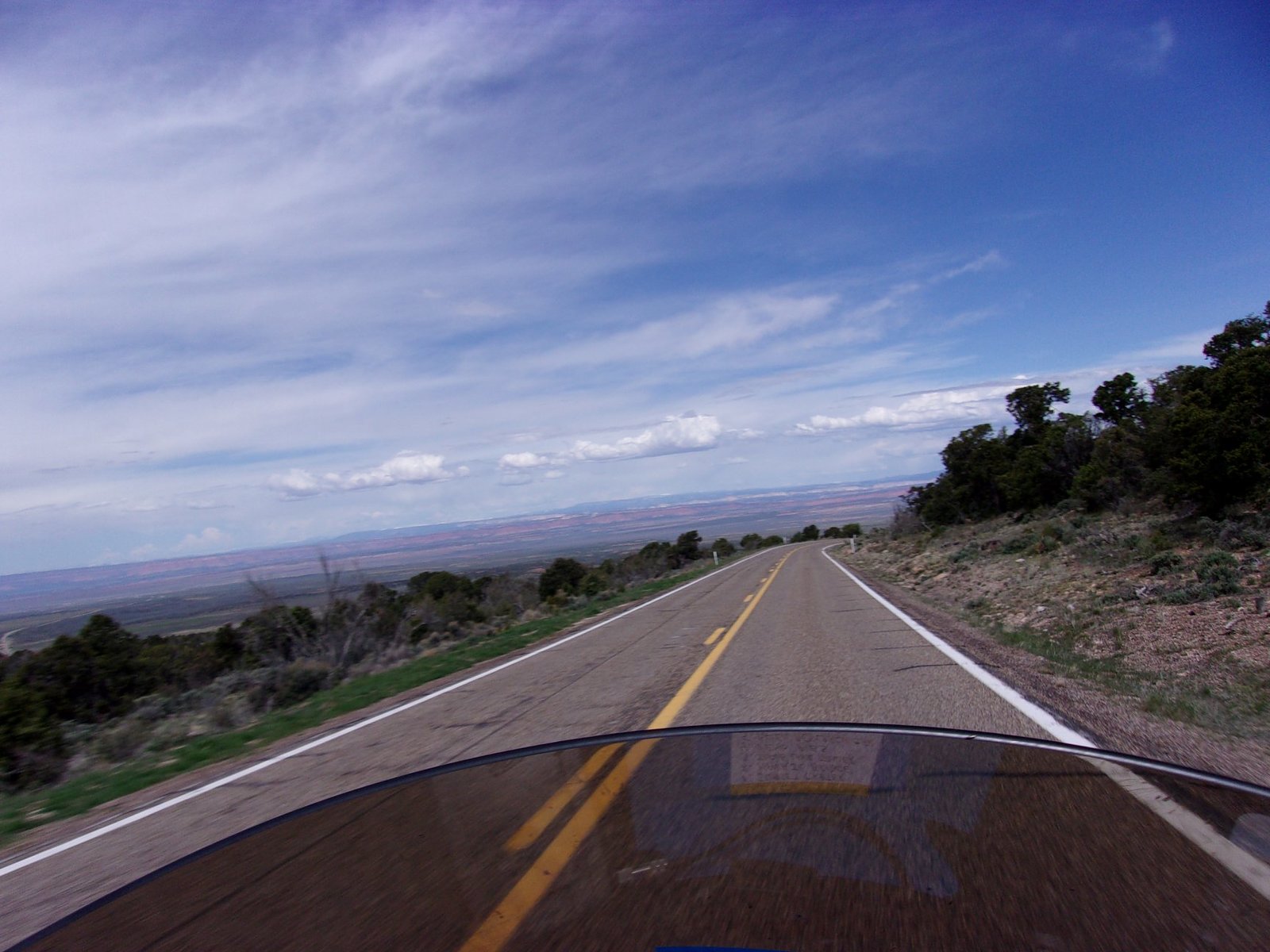 Next up was Veyo Pies in Veyo UT, but first I had to go through Hurricane which lies on the other side of this snow covered mountain. Fortunately, the road routed me around the mountain and not over it. 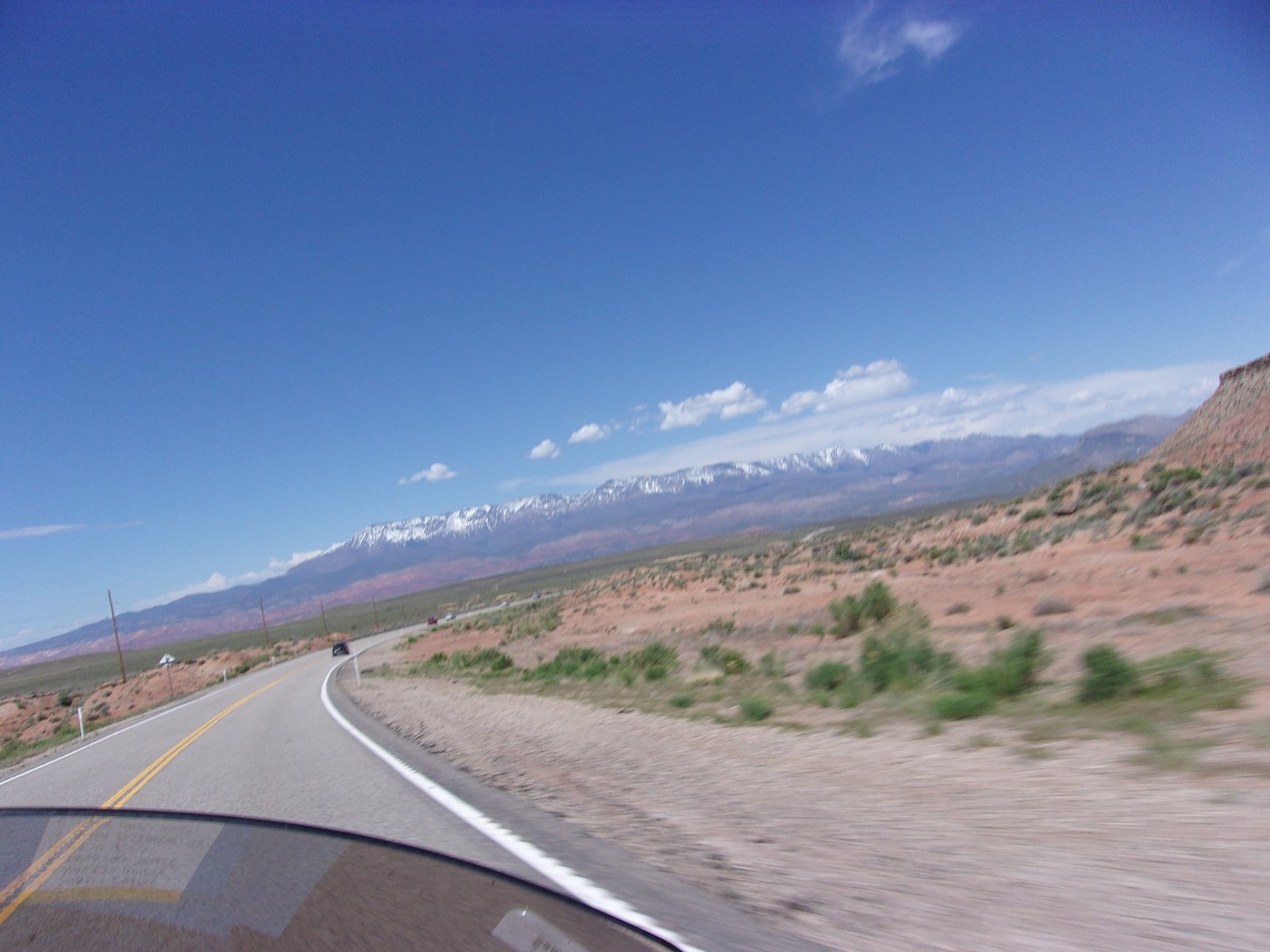 And the Veyo Pies location. With as crowded as it was I should have stopped and tried some, but I didn't want to ride while in a food coma. About an hour after this I encountered the ONLY police I would see all day/night long. It was in a curvy mountain section with a 50 mph speed limit. As he went by the other direction with his radar blazing I glanced down at the GPS and it was reading 53. Whew. 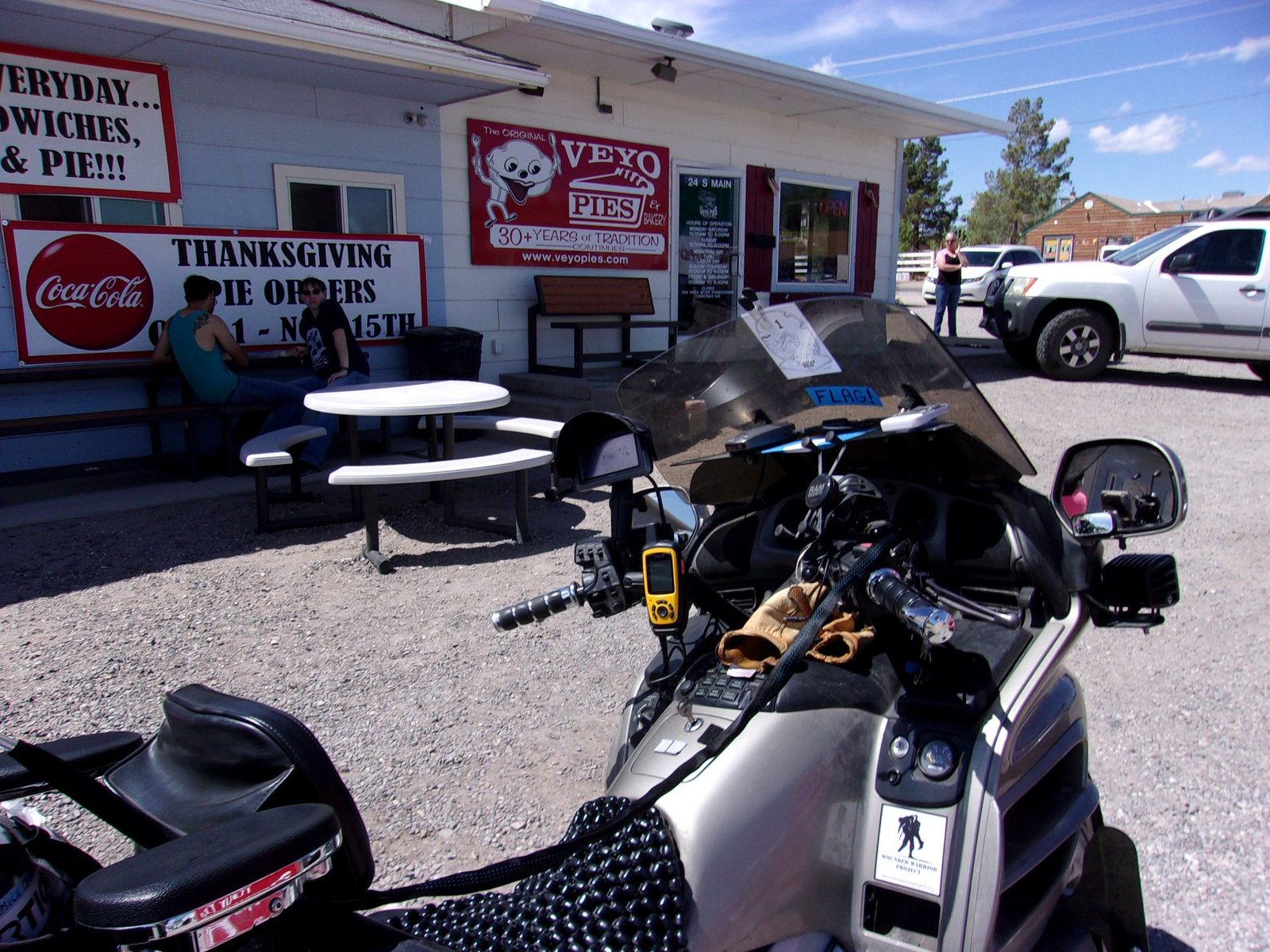 Now that I was done with Utah it was off to Nevada. See that road ahead of me? That's the indicator of what I would be looking at for the next bunch of hours. 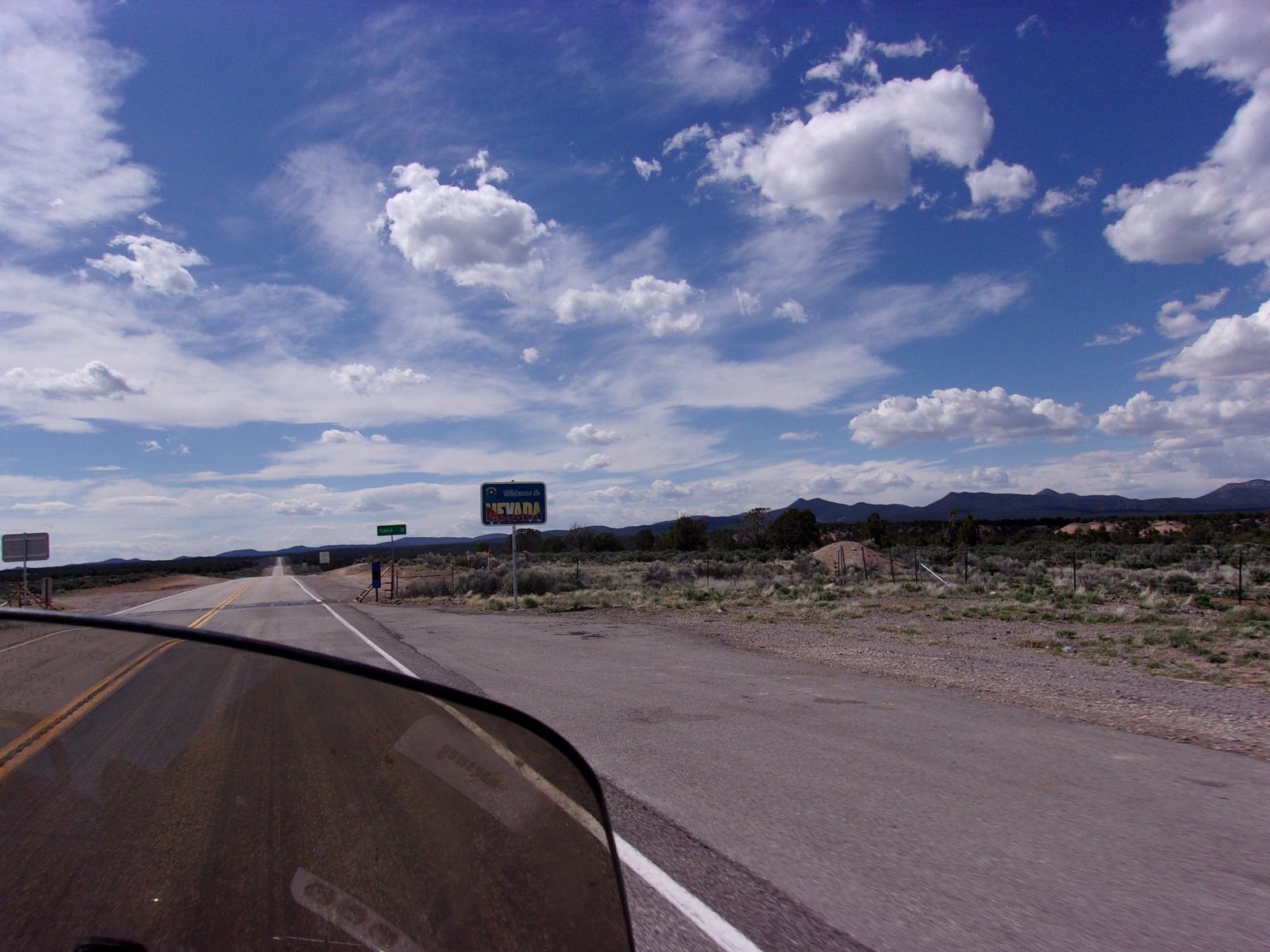 Caliente had some nice sweepers coming up out of that town through those mountains in the background, but once you come down the other side this is all you get to see. 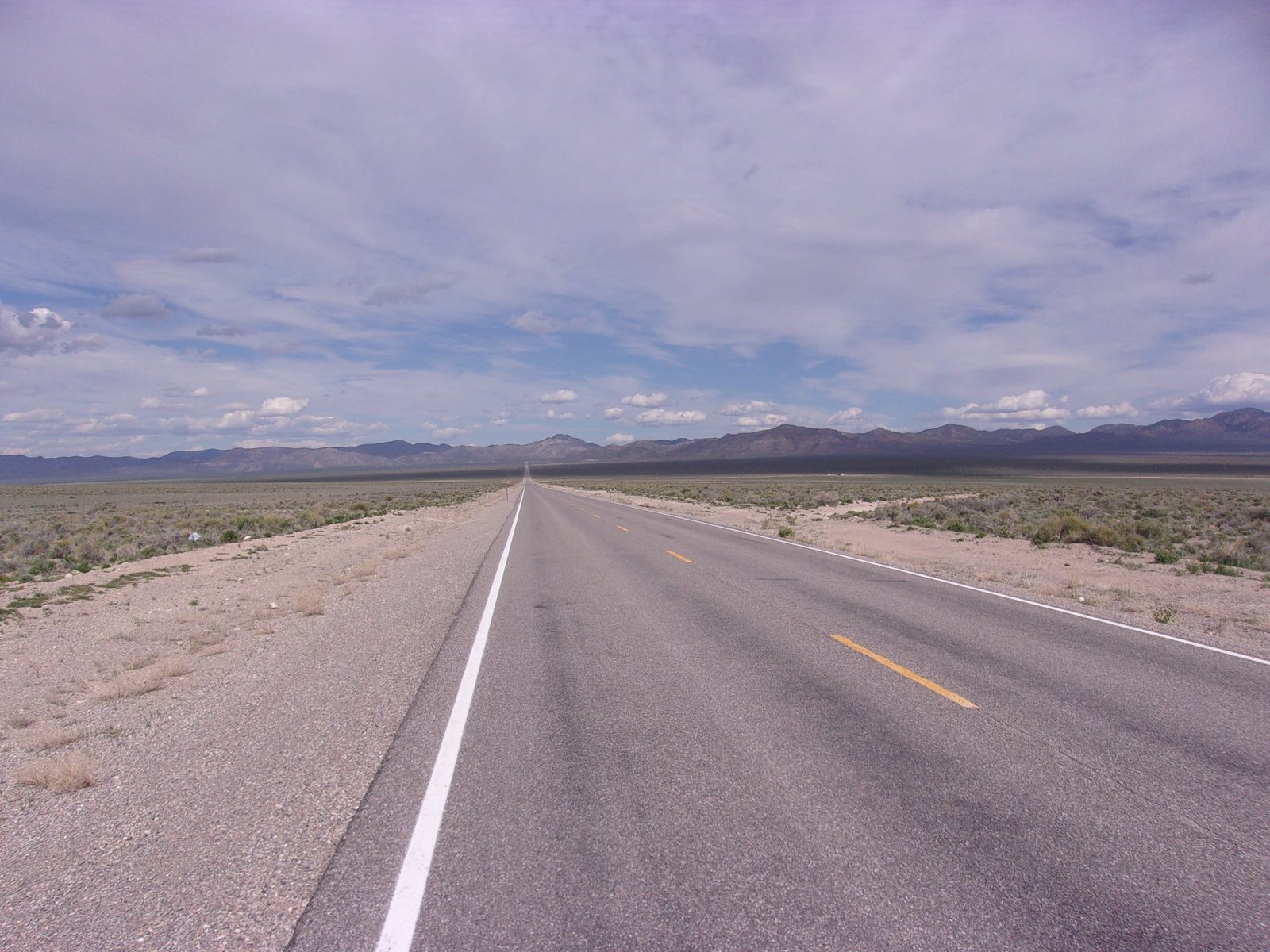 I also had my one of two animal encounters coming through those sweepers. As I was leaning into a left hander I glanced at a red truck down off to the right. As I returned my view to the road ahead I found a large antelope just standing still in the other lane also looking at the red truck (or at least looking in that direction). I got hard onto the brakes and was probably down to about 20 mph when he finally noticed me and ran off to his side of the road. I had scrubbed off enough speed that even if he had crossed in front of me he would not have been a threat.

The road ahead of me after I took that last photo. 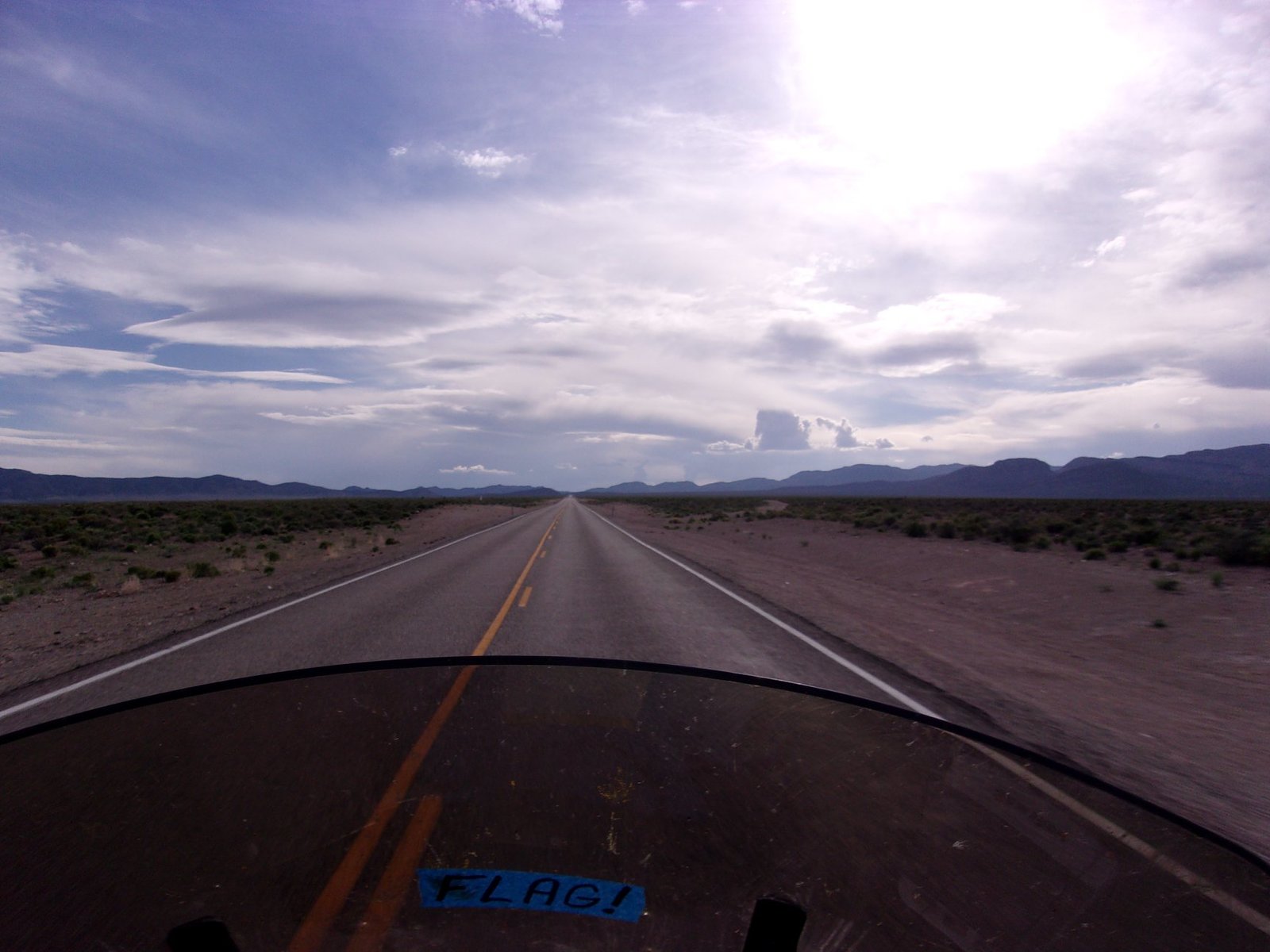 Next on the list was the Alien Research Center in Hiko NV. Typical tourist trap, but cute. Clean bathroom. Good local info, especially regarding gas station locations, and the local police situation so I bought a little Alien sticker. 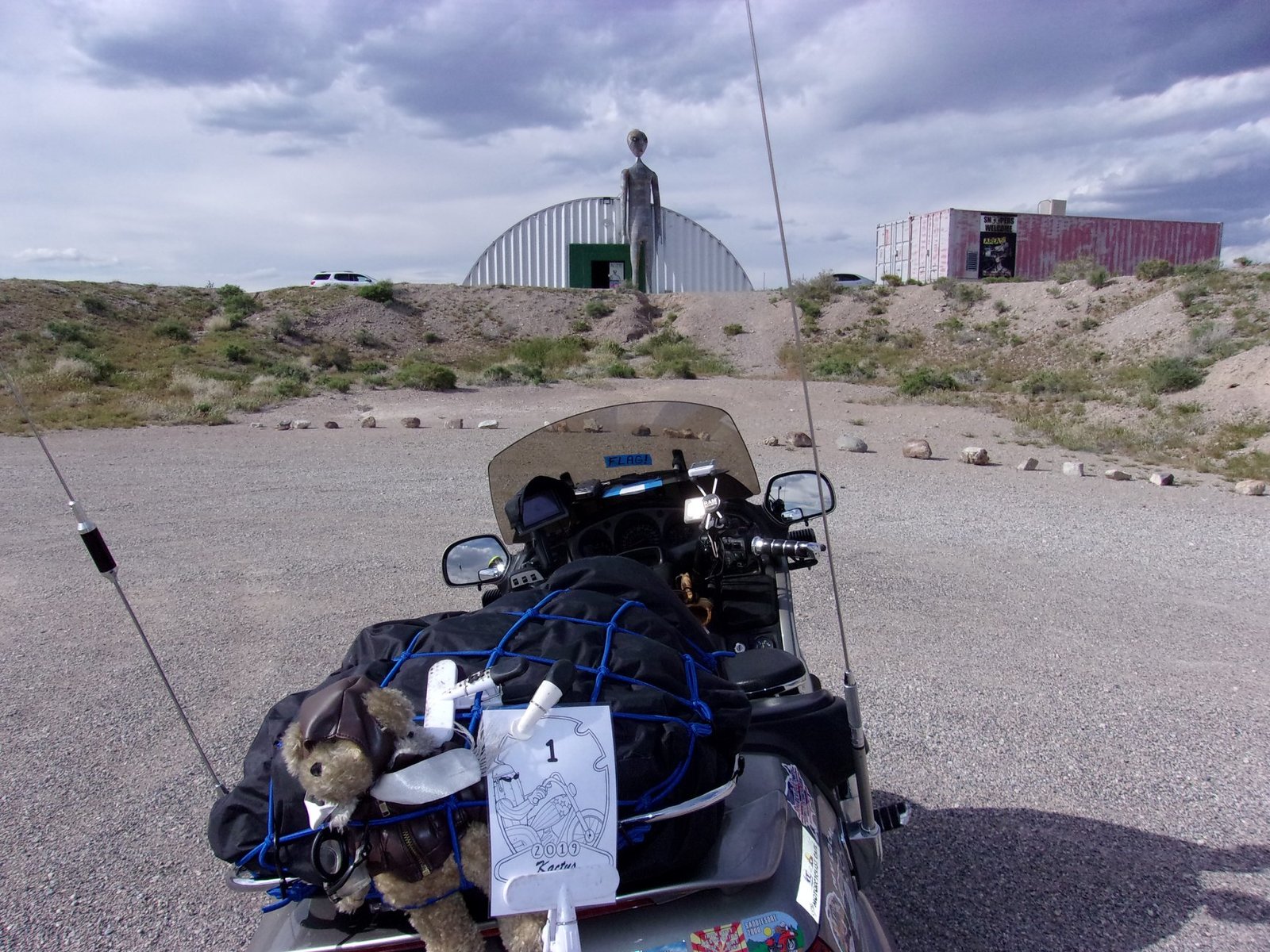 This is the sign just prior to the Research Center. Just past the sign and prior to the Center was a sign that said NO Gas for 150 miles. Just behind me by ten miles is the last gas station. I'm sure glad I paid attention to the sign, because I returned back to Alamo and filled it up to the brim. 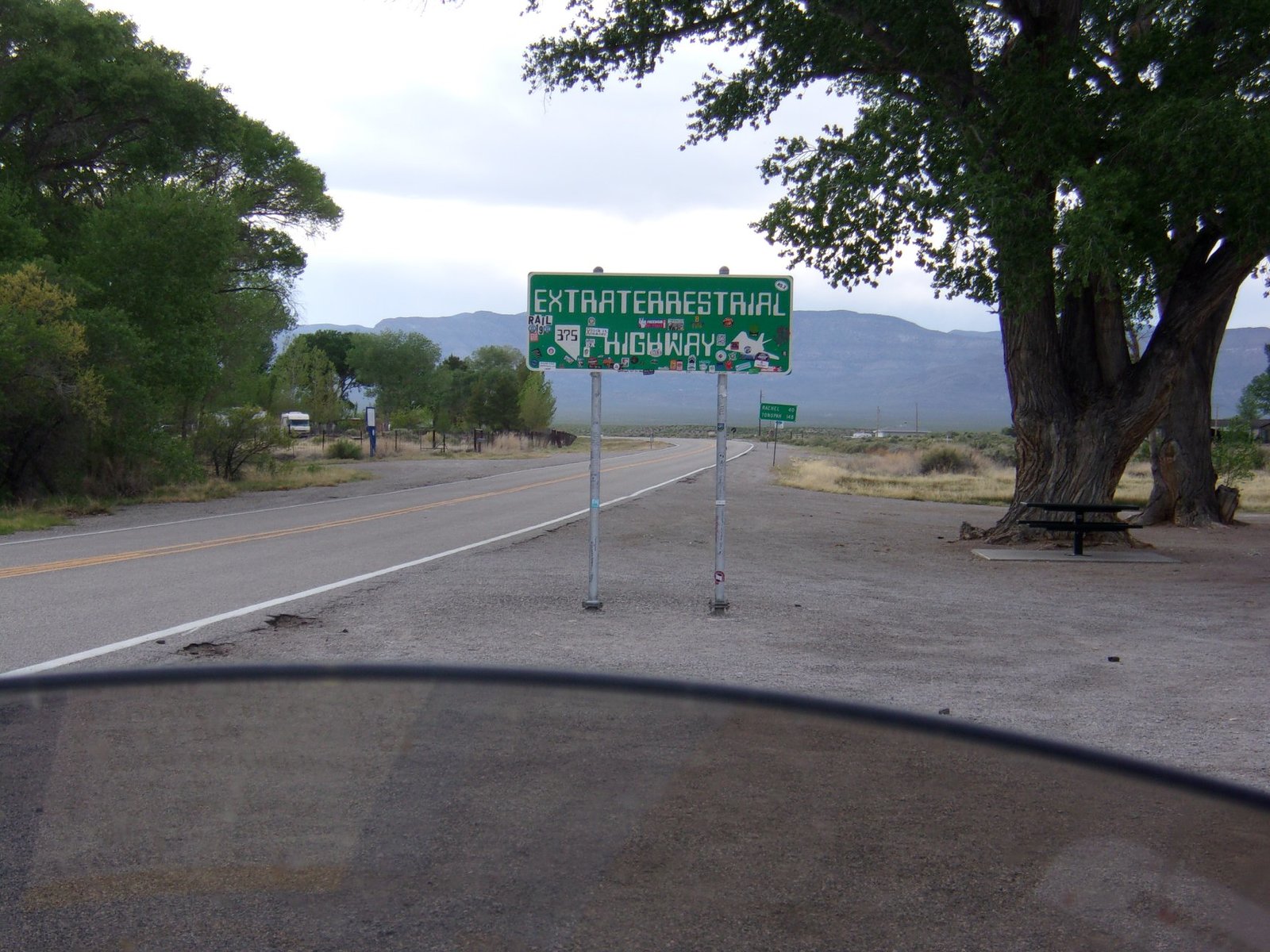 After leaving the Center, this is what I saw a lot of. 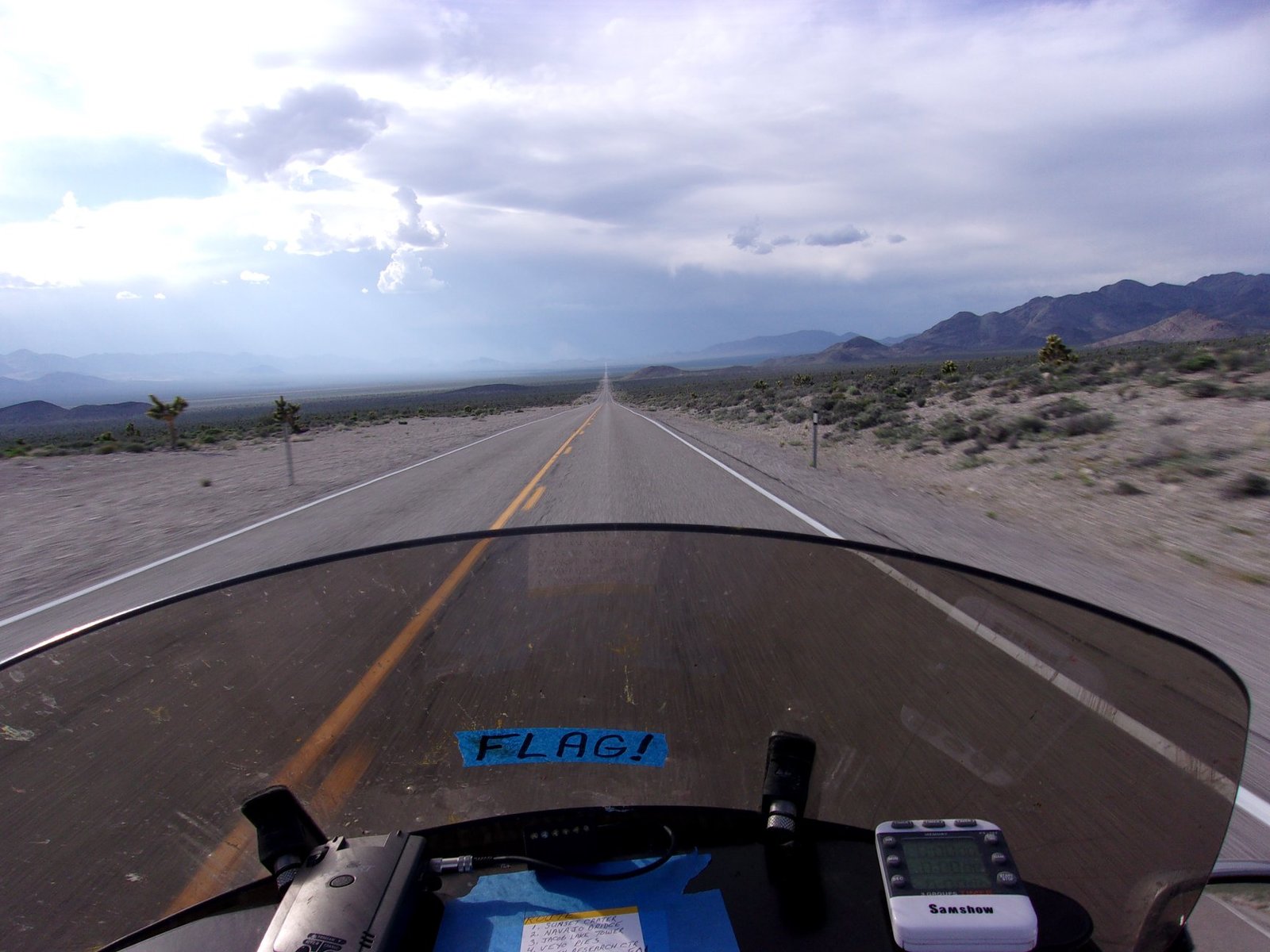 Yes, I got wet. What would a Rally be without some rain? But the wind was the worst part. After I left the Center the wind picked up and it was BAD the remainder of the day and into the night. 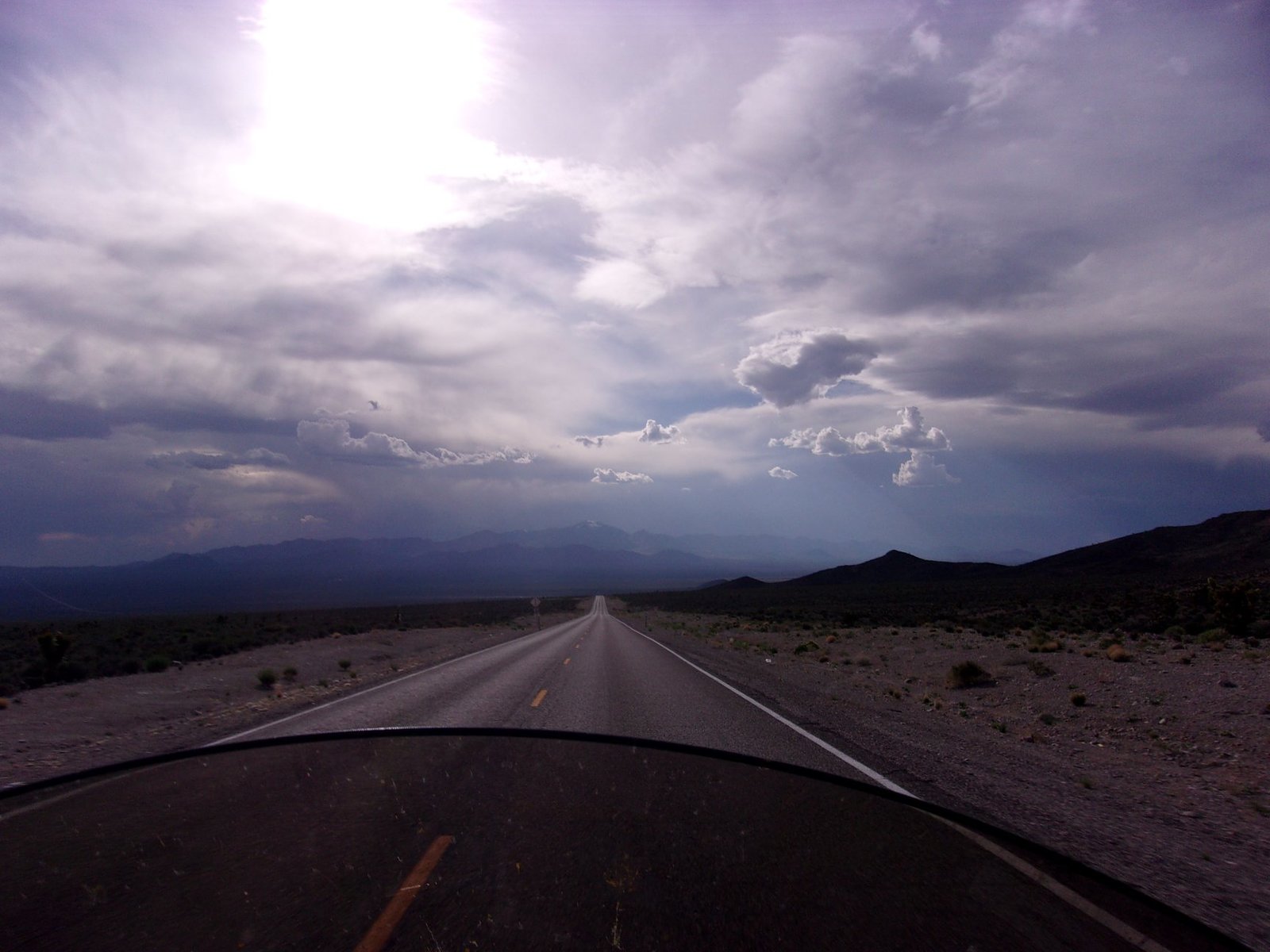 I finally reached the the Little ALEinn in Rachel NV, literally the middle of nowhere, where I grabbed this photo of a tow truck hauling off a spaceship. And yes, that is more rain ahead of me. I'm glad I had my heated gear because it was around 48 going through a lot of those passes ahead of me. 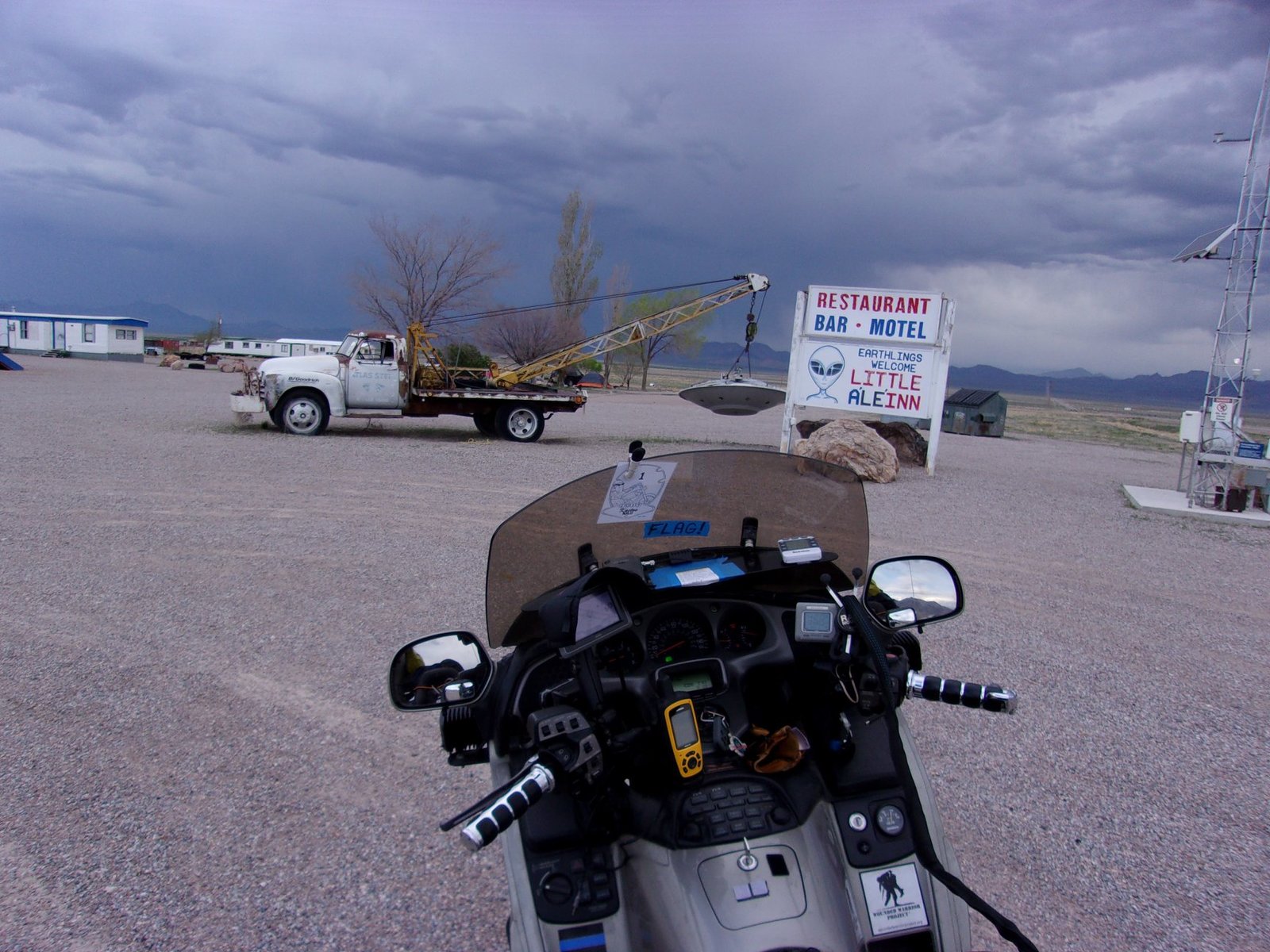 After Rachel, there was nothing other than Open Range land all the way to Hwy 6 when I went south to Tonopah. It was on this leg prior to reaching Hwy 6 that I had my second animal encounter. Bessie the cow decided it was time to go home and decided to cross my path from south to north. She saw me coming but didn't change her pace at all which forced me to slow way down to give her space. All the other cattle I had seen were anywhere from 50 feet to miles away from the road, yet she decided "her time, her space" and sauntered across just when I happened to show up.

That was the last of my bonuses. Because of the gas situation I had to go south to Tonopah to fill up. I had enough time to get gas and then backtrack, but I didn't have enough energy. I was already feeling the strain and knew that if I added on another few hours of back and forth I wasn't likely to make it further without stopping for some sleep. So I called it at that point and headed for home. I really need to update my GPS because it routed me THROUGH Las Vegas on a Saturday night instead of around it. Grrrr (but totally my fault). There were several bonuses available in and around Vegas but not enough to compensate for the 1300 points I missed by not getting the two northern bonuses and then the Combo bonus for those two plus Sunset Crater, so I just headed for the barn to check in and get scored.

When I arrived my two friends Marc and John were there finishing up their scoring. They had ridden together and claimed the same amount of points; over 3200 while I finished with 1050. They are both multiple Iron Butt Rally finishers, so proper routing is second nature to them. They both also run aux fuel tanks on their Wings which gives them about a 350-400 mile range on full tanks. If I had had an aux tank then I could have gotten the other two bonuses I needed, but oh well, live and learn.

This was only my third rally and I enjoyed it and learned a lot. I asked the Rally Master to consider adding a 12 hour rally to the agenda next year as I'm not enjoying riding at night because I don't think my night vision is all that great any more. When I have the ability to turn on all my lights I can turn night into day, but even in the middle of nowhere (Hwy 95 from Tonopah to Vegas) there's still too much oncoming traffic to use all the lights all the time. 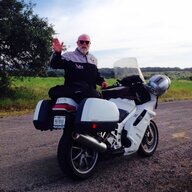 Great ride Brian and a fine write up with outstanding photos. On another subject, the universe was right causing me to tank my Atomic 1000. My left leg started hurting like the devil on Sunday. That would have been during my ride home. I was admitted At 6 AM Tuesday for emergency surgery.. I had the main artery in my thigh collapse cutting the blood flow off below the knee. They told me it was due to a previous injury. I was able to get back on a bike last Saturday and did about 350 miles. I had a bit of trouble shifting, I suffered some nerve and tissue damage but they say it might not be permanent.
Keep the rides coming.

Dang. I'm glad that was caught in the nick of time.


To add insult to injury, another friend riding the rally and also on a Wing, discovered a gas station 50 miles north of the two bonuses I had to drop. If I had known about that station I could have made it there and then been good for finding even more bonuses. Live and learn.