After doing a fair amount of gravel and dirt riding in the last week or so, I'm starting to wonder if I should get some new tires for the bike. It came stock with these: 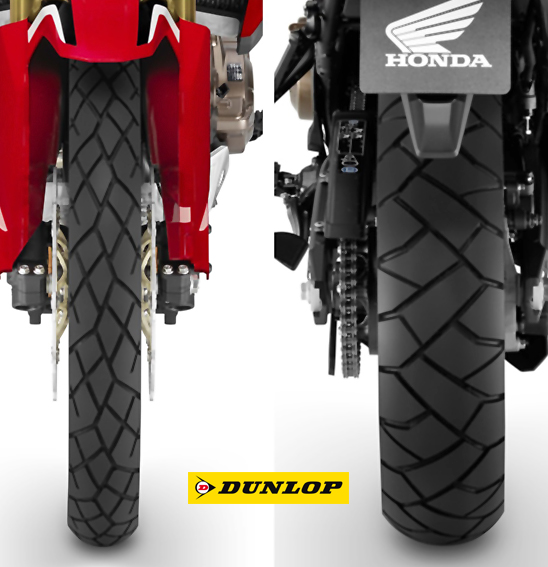 As far as I know, they seem fine on the street. I've had them up to 115 mph and all good. But when I go off pavement, things get a little wiggly.

I wondered if there might be some tires that still give me decent street performance, safely allow me the occasional 100+ mph run on the street, but also help me out when I go off pavement.

Any recommendations? I heard people talking about some of these options: 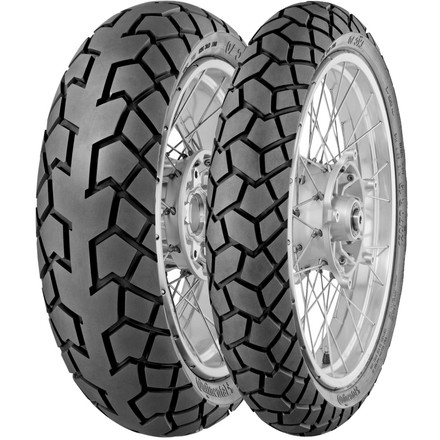 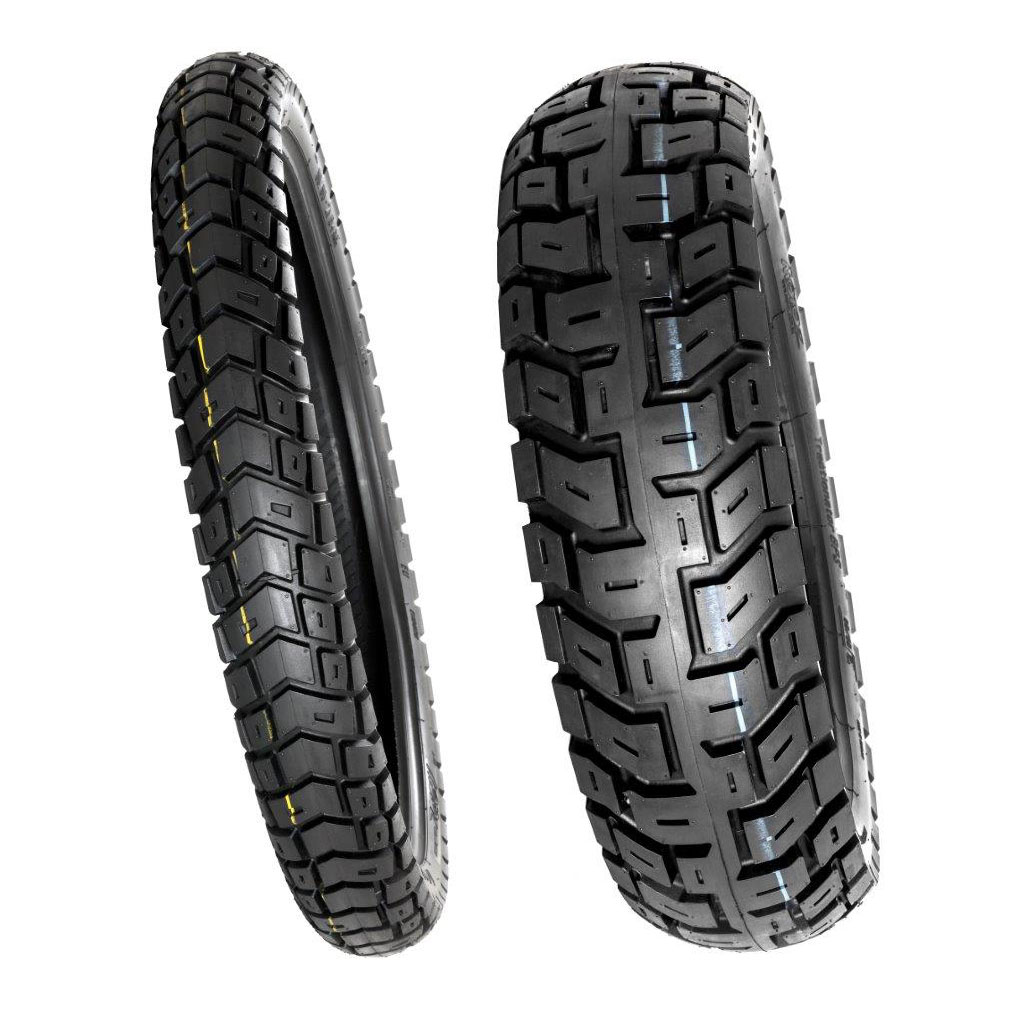 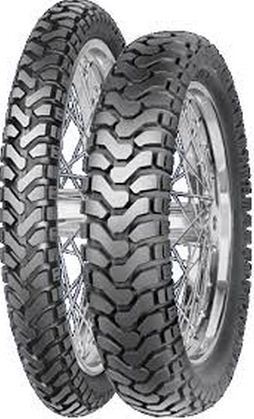 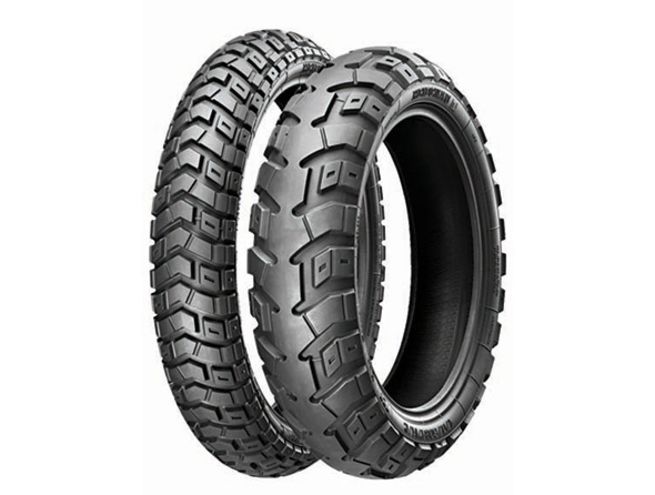 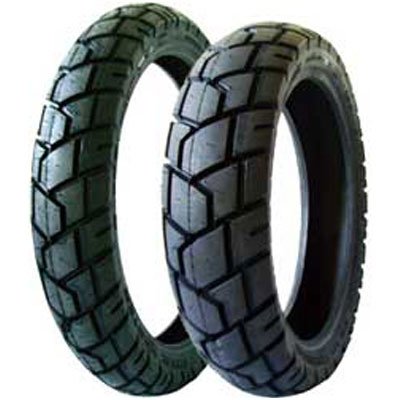 After Conti TA2s and Mitas E07+, the Shinkos will be my next tire.

I've had three(?) sets of these. Good on pavement to 100(closed course

) with the occasional twitch or wobble at around 105(closed course) I don't ride over 100 very often, so acceptable to me.


No one tire is going to do both optimally. I've got a set of Pirelli Trail something or other mounted now for a 98% pavement ride next week in Utah. I've used Michelin Pilot Roads for similar rides.

I'll probably come back to the TKC/Mitas when I re-tire, because it works for me and the places I ride around here.

Shinko 705s do feel weird at triple digit speeds. But not really scary feeling. They are H rated for 130mph?? HP and weight will square off the back in 3-4K miles. Still wiggly on gravel but better than the OEM tires. You might check out Anakee Wild tires if they make a 21 inch front.

MY EO7 DAKAR'S ARE PLENTY STABLE UP TO 100 AS FAR AS I CAN TELL. LIKE mitchntx SAYS, I'M ABOUT HALF DONE TOO WITH COMPARABLE MILEAGE. THINKING THEIR WORTH ABOUT 6-7K ON HARD SURFACE. THE WIDE FLAT SPOT ON THE REAR IS GOOD FOR SLIPPY GRAVEL BUT WILL FADE IN PURE MUD. I LIKE THEM BUT I DONT HAVE ANY OVER-REAL EXPECTATIONS WHEN RIDING IN DUAL SPORT CONDITIONS.

LITE IT UP...IM GOING TO SPEND THOUSANDS OF DOLLARS MONITORING YOUR SPEED UNTIL I GET THE EVIDENCE I NEED TO PROSECUTE YOU OUTSIDE A CLOSED COURSE

I love TCK70's for gravel roads. You don't need TKC80-type grip there, and feel plenty good on pavement. Probably would not be a whole lot different to your stock tires.

TKC80 from and Scout K60 rear is also a good setup. The K60 is squirrelly on wet pavement though.

I've had all kinds on my GS but after riding PR3s and 4s on some long trips with a mix of pavement and gravel, I stopped there. They handle curvy pavement better than any tire I've tried and feel planted on gravel roads. I feel this is most due to if there are embedded rocks in the road, the tires softer side tread grips it. On the other hand, it will eat up the tire quicker. Deep gravel, I don't care what you got, it's going to feel squishy.

They have a trail version made for heavier bikes. They also have a new PR5 which looks really good but haven't tried those yet so can't comment.

Mitas E-07 are great 50-50 tires. In my recent trip to NM they did really well on gravel, rocks, pavement... stable and well planted. This is my pure 50/50 tire going forward. They are supposed to last a long time too, but I don't know that from experience yet.
L

LITE IT UP...IM GOING TO SPEND THOUSANDS OF DOLLARS MONITORING YOUR SPEED UNTIL I GET THE EVIDENCE I NEED TO PROSECUTE YOU OUTSIDE A CLOSED COURSE

I have the Shinko 705s on my BMW 1200 GSA and I know I've hit triple digits making passes and they were fine. Seem to work fine in the dirt too. Wearing okay so far, but since the price is nice, I'm less worried about get the most out of them whereas with the TKC 80's or the Karoos I would be.

WoodButcher said:
Wearing okay so far, but since the price is nice, I'm less worried about get the most out of them whereas with the TKC 80's or the Karoos I would be.
Click to expand...

I PUT THE K60'S FRONT AND REAR ON MY AT. THEY WORK GOOD BUT THE FRONT WHINES ALOT ON PAVEMENT. NEXT TIME I WILL HAVE A TKC80 FRONT AND K60 REAR

If you plan to ride pavement to get to NW Arkansas and back, and also ride a lot of pavement while you are there, then you want a street biased tire. This would be true even if you think you might do a bit of forest roads here and there, so long as they are DRY. My take is that you really only need a more aggressive tire if you plan to ride a lot of unpaved stuff that will include deep gravel and/or sand. Most gravel roads are hard packed and the big stuff has been knocked away by trucks and cars, leaving two relatively clean tracks. Unless you are really hauling down the roads, most any tire will do. Those long get there and back stretches of pavement will eat tires like the TKC 80s. However, in places like Arkansas and North Carolina where you spend more time leaning over, you can do many many miles and the TKCs will last quite well because you are using more of the tread on the sides instead of just the center.

I used the K60s for a long trip to Utah/Colorado and they did pretty well, but we never had any serious rain. We did ride on some slush covered roads in SW Colorado and I had a serious pucker moment when I crossed from one side of my lane to the other and hit a bit of ice...

Other than that, they did really well. I even ran through some deep gravel and some nasty sand/silt. For that last bit, I was REALLY wishing I'd had the TKC 80s on the bike at the time, but I got through it.

I did another long trip around Utah and Colorado riding two up with my daughter when she was eleven. I had all three hard bags mounted and FULL. I had the TKC 80 front and a Shinko E-805 Rear. We did a bit of fast highway blasting in places and a LOT of dirt, gravel, and sand in the mountains. Other than in one section that was really muddy from rain the night before, the tires did great. We rode for seven days. The tires were maybe half gone by the end.

I used to agonize over which tire would get the most miles per dollar. I quit doing that. I've never gotten the high miles out of ANY tire that other people claim. I have yet to find any rear that will last more than maybe 4500-5000 miles and maybe 6000-7000 out of a front. But then I don't run them until they are baby butt smooth. I change them when they hit the wear bar, or if I am about to head out for a major trip. I like to have fresh tires when heading out for a big trip. Having tires go away in the middle of a trip sucks. Don't be "that guy"

The 805 rear is cheap compared to the TKC 80, last just as long, and has about 80% the performance in the loose stuff. If I know I am going to be doing a lot of nastiness, I will still use the TKC 80 rear. As for the front, I pretty much only run the TKC 80. But, I live in East Texas and we have a LOT of sand here. It makes a BIG difference when you hit sand. Tires like the Anakees and Tourances are no fun in sand... My default right now is TKC 80 front and Shinko 805 rear.

For just a general purpose tire that can manage most stuff, I think the K60s are a good deal. You just have to be aware of their limitations. As for whine or noise, wear ear plugs

Thanks for all the info.

Is there any place in the DFW area that has these tires in stock? Do I get new tubes with new tires as well?

Also, do you have to ride the bike on the street differently when you go with these more aggressive tires?
Last edited: Jun 8, 2018

I was in Dallas earlier this year on a horribly worn rear tire. I called around and found a guy that bought a tire for me, brought it to the hotel where the conference I was attending was taking place, mounted it, balanced it, lubed and tightened by chain. Whole thing took maybe 30 minutes. If he lived in Austin, I'd never mount another tire myself!

And yeah, these semi-knobbies do squirrel around more on pavement than pure street tires. You'll get a feel for the difference pretty quick...

Any compelling reason to pick either of those on the front tire?

I can say the K60 on the rear of my twin sucks in gravel. Must be the full wide center, turns it into a slick on gravel. It worked good in rocks, but worst tire I have ever used in gravel or sand.

For more of a 70/30 tire the Pirelli MT90 tires front and rear. Fantastic on the road and really good in gravel, sand and rocks. Not a 50/50, but really good.

I did pull the trigger on some Dakar tires (to replace the K60), should be here today, hope to get mounted soon and will report back.

Jarrett said:
At this point, I'm thinking TKC80 rear and either Shinko 804 or TKC80 front.

Any compelling reason to pick either of those on the front tire?
Click to expand...

Just ride, man! You're new to motorcycling, so pile up miles and start looking at tire options once the OEMs wear out. There is no substitute for seat time, and it's unlikely you will consciously traverse terrain requiring a semi-knobby anytime soon. If 80%+ of your mileage is on paved surfaces, and the remainder on packed dirt/gravel, you have a good tire today.