So Scott (M38A1) and I had a good time last year taking bird pictures at Bosque del Apache NWR, near Socorro, NM. We decided to do it again and Kyle (Deco) was invited along. A last minute group member was my nature (but not cold) loving daughter (25years old). Katie recently took a job with the Irving ISD at their nature center so she had more time off than with her old job. My family headed to Phoenix for Christmas, so the plan was for Katie and I to drive from Phoenix and meet Scott and Kyle in NM on the 26th. A week before departure, in a moment of feeling flush, I rented a 600mm monster lens. The rental company shipped it to my mother-in-law's house in AZ. It got there early so that gave me a day to play with it which was awesome.

So, that sets the table for the adventure. Let's get rolling. Katie and I had two routes to choose from. South out of Phoenix on I-10 to Las Cruces and north on I-25, which we'll call the boring, safe route. The other being north out of Phoenix to Payson and along the Mogollon rim following US 60. We'll call this the high altitude, scenic route. The forecast was optimistic that snow was coming, but the day before we headed that way and likely to not be an issue. Likely...we call that foreshadowing. Meanwhile, heavy rain on the Texas side was facing Scott and Kyle. They came the safe route on I-10 through Las Cruces. Smart move.

The was no snow in Socorro, NM until the 28th, BTW. So we were heading to a safe weather spot.

Katie and I decided to take the north route. We wanted scenery and weren't afraid of some snow. We were in a Subaru, what's there to fear? And two hours after leaving Phoenix, we were on the rim, at 7500 feet...in over 8 inches of snow on the ground, but the roads were clear. We took a quick hike and Katie was have fun knocking snow off of branches. 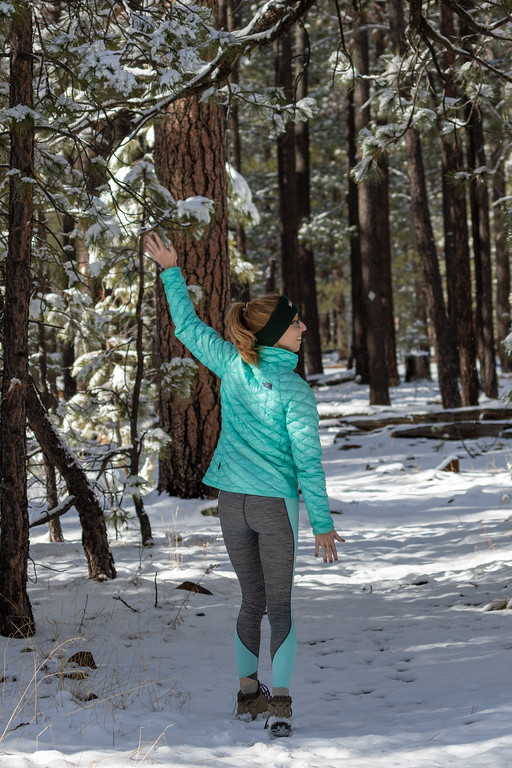 Then the goofball decided to kick a little tree. I just wish I had a wider angle lens. 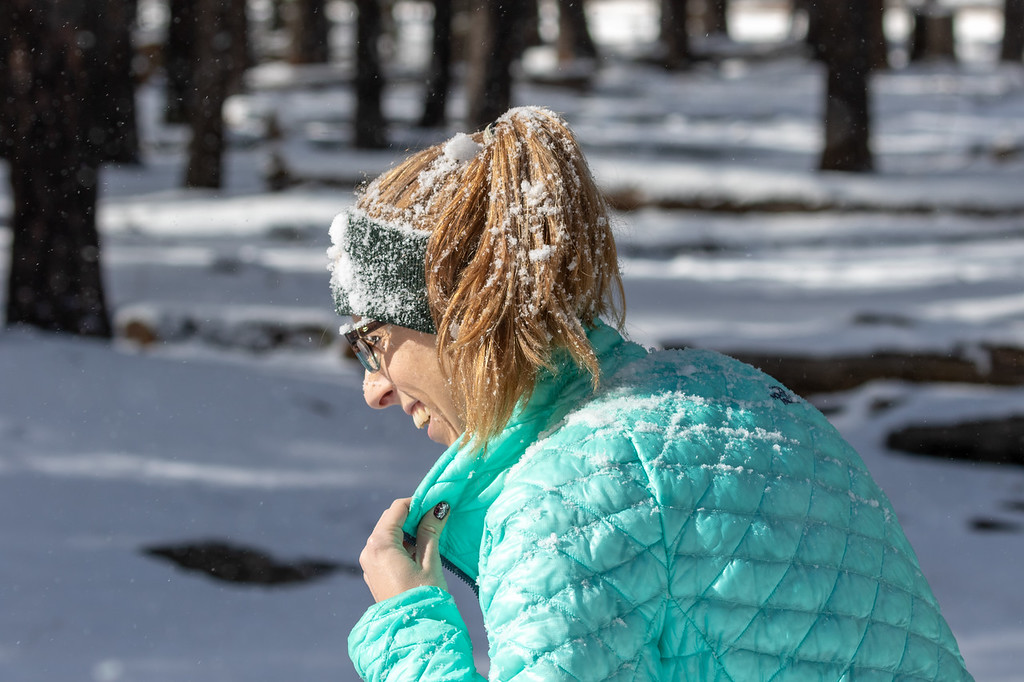 We got to see some nice country and stopped to take pictures. These were after we had gotten out of the snow, but then is started to show up and thicker. Notice the clouds in the direction we are heading. 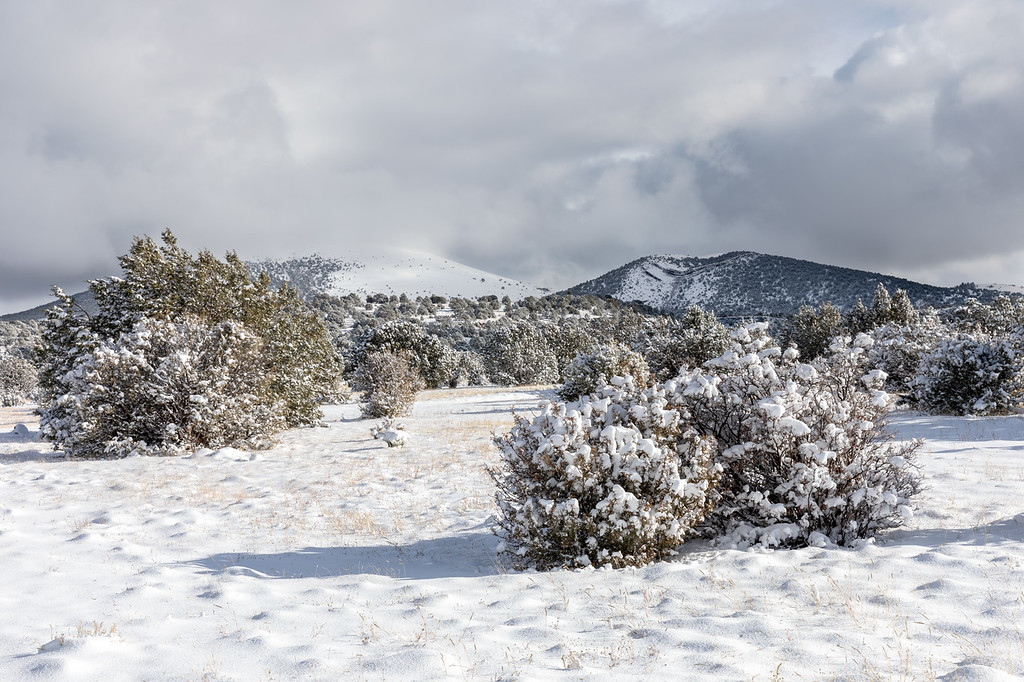 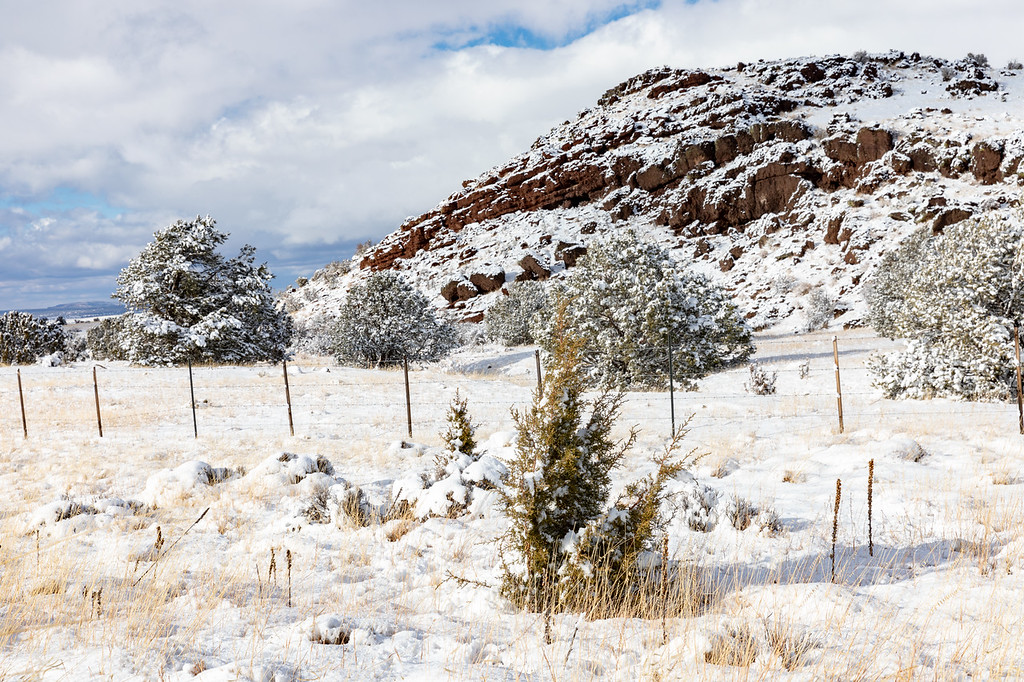 That's the end of the pictures for the trip out. Snow started falling off and on all the rest of the way. Beautiful, but it was time to keep rolling and not delay. Still got in after dark and only 10 minutes in front of the Texas crew. Should have only taking us 7.5 hours with our breaks, but it was closer to 10.

On the 27th we headed to the refuge. Because of the government shutdown, there was some worry that they wouldn't be open, but they were. Just minimal staff and the visitor center and attached restrooms were closed. Restrooms in the refuge were open and in good shape though. 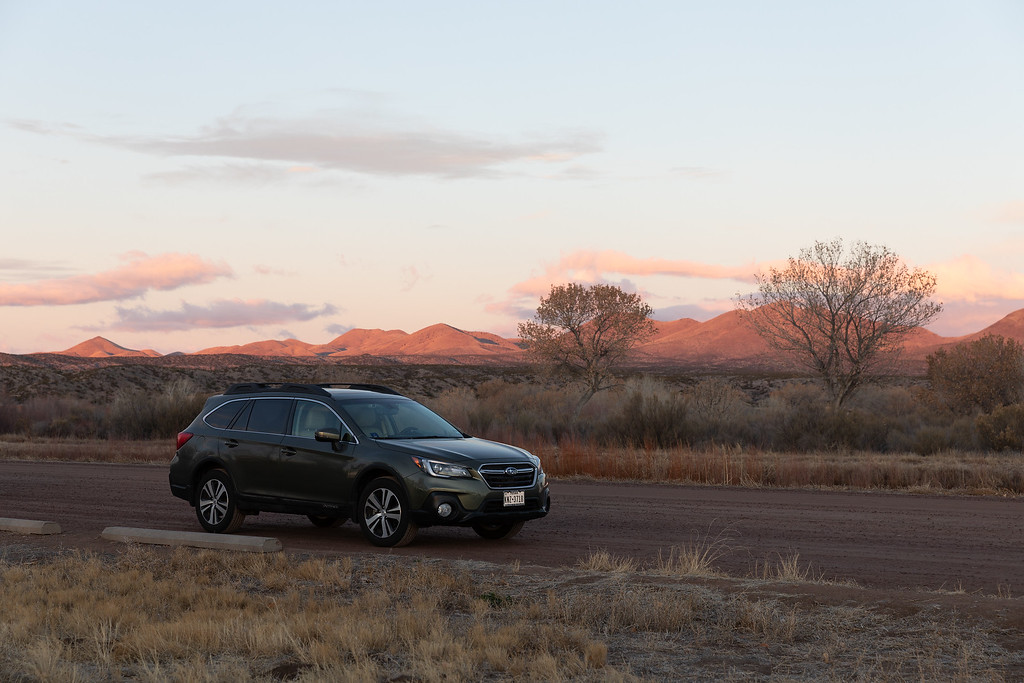 Notice no snow in the background. That will change.

We were there (and late) for the snow geese blast off. Still got to see a secondary wave of them. Always impressive to see many thousands of geese spring off the pond at once. But I was watching more than shooting. I'm sure the other guys got shots. I did get some nice shots of sandhill cranes with the sunrise in the background. 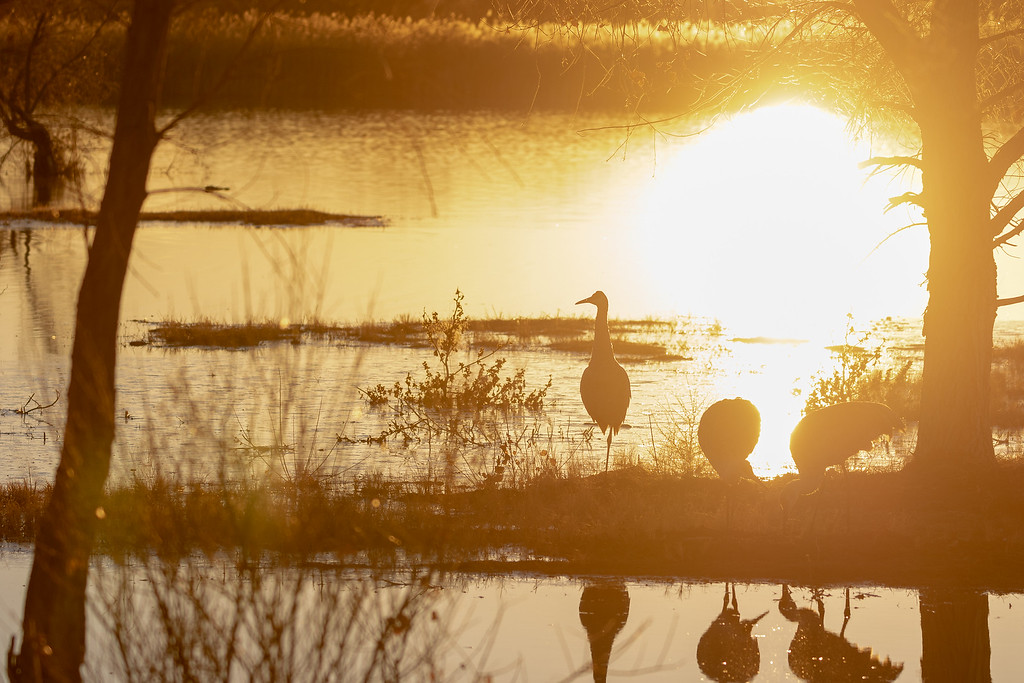 I'm going to toss up some of the shots from that day. Not everything 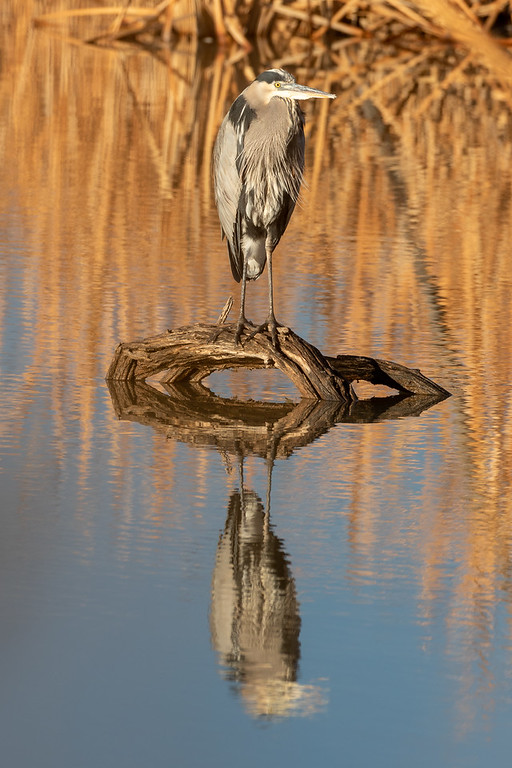 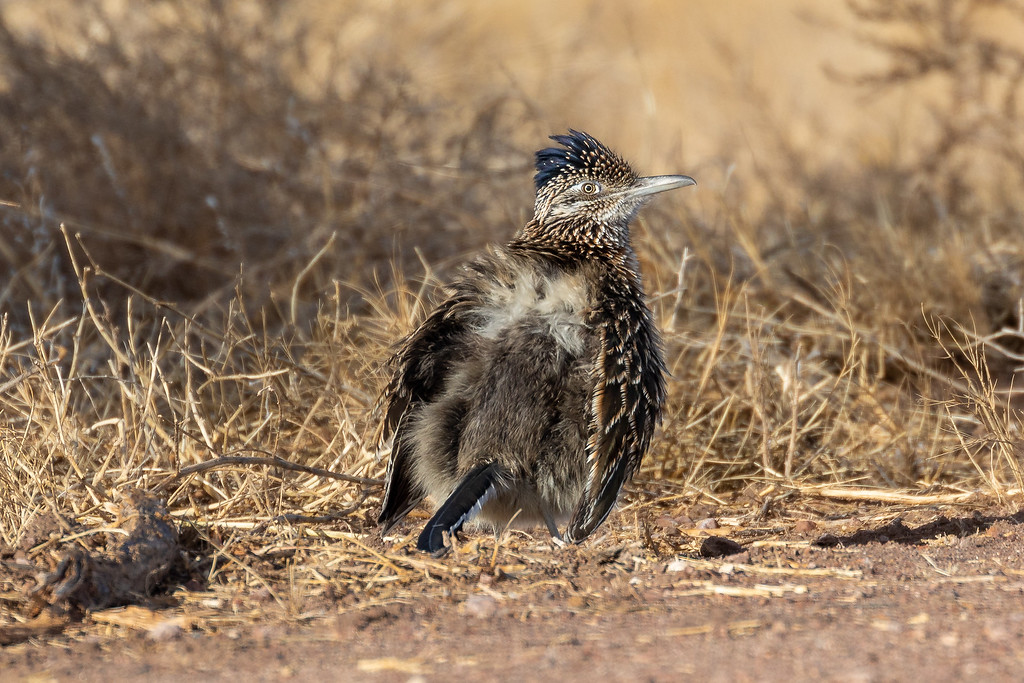 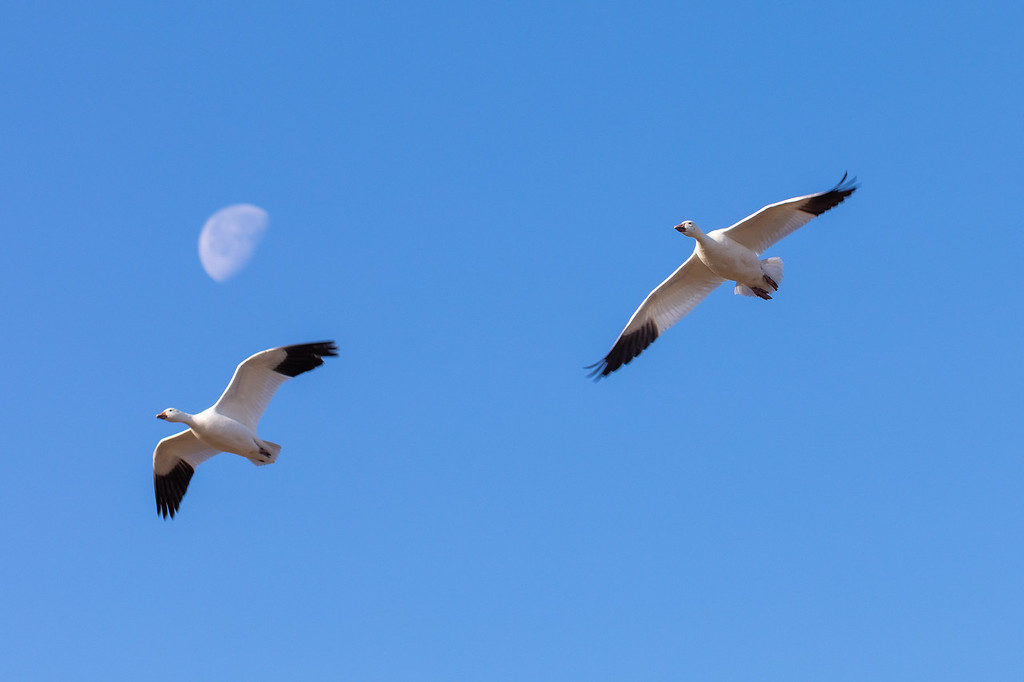 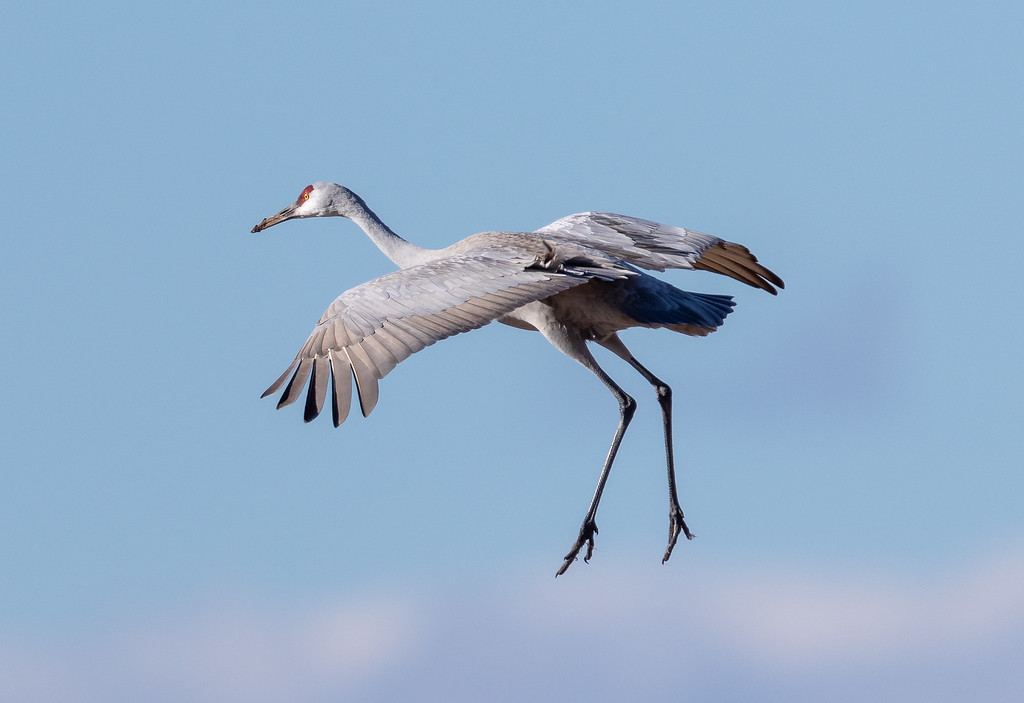 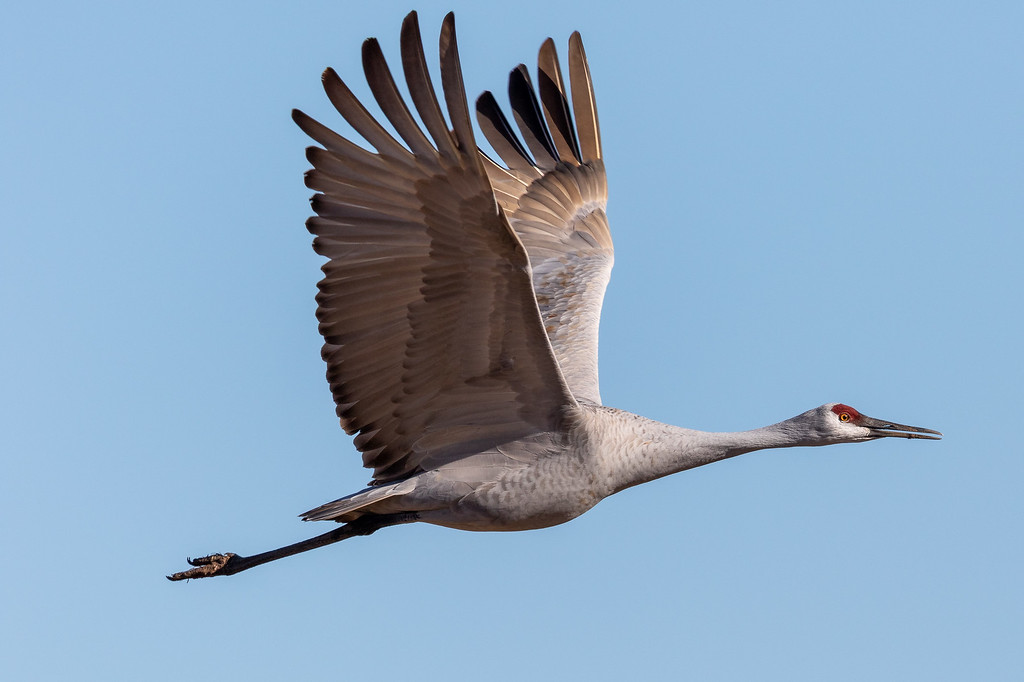 I like this with the dusting of snow on the mountains in the background. They are far off and high, but that is what Katie and I came through. 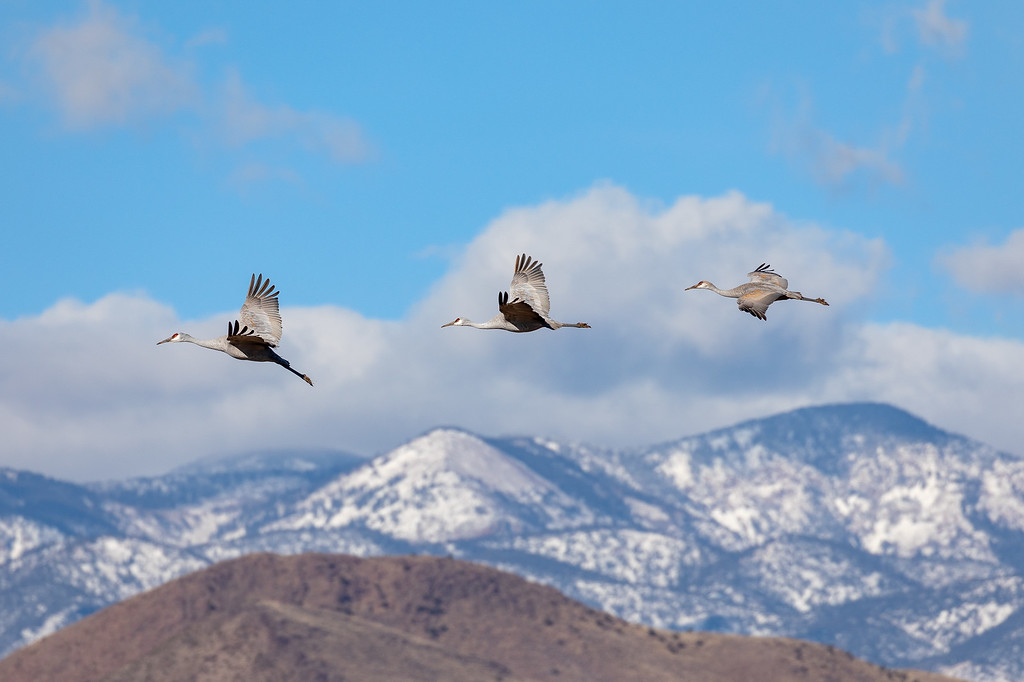 In the afternoon Katie and I split off and did some hiking. We were being watched. 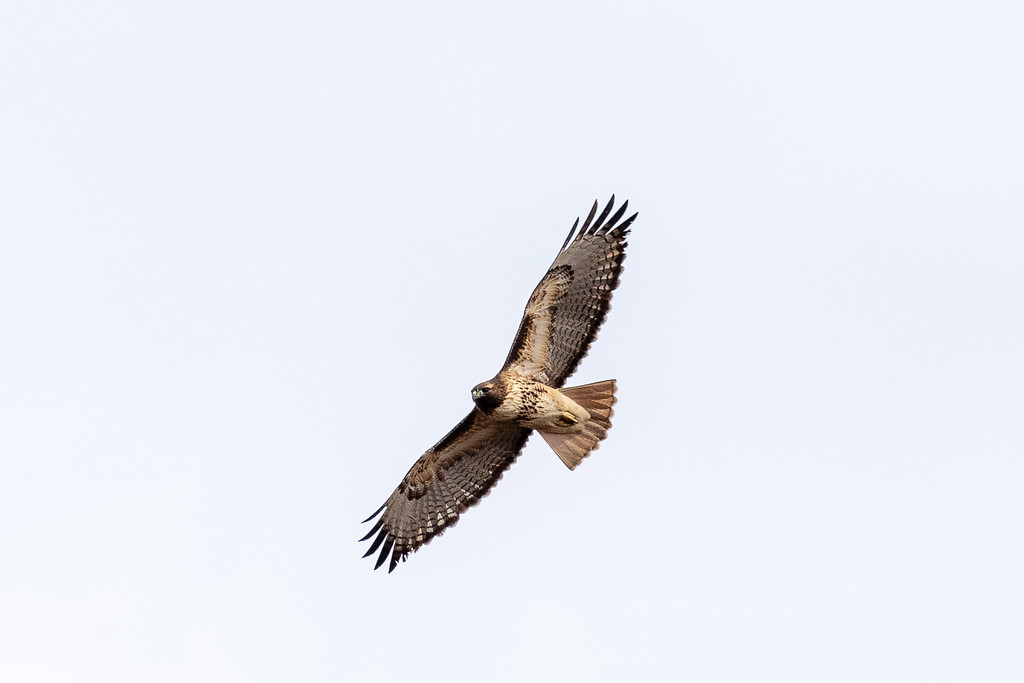 Dang those herons are patient. He's still in the same spot later in the afternoon. 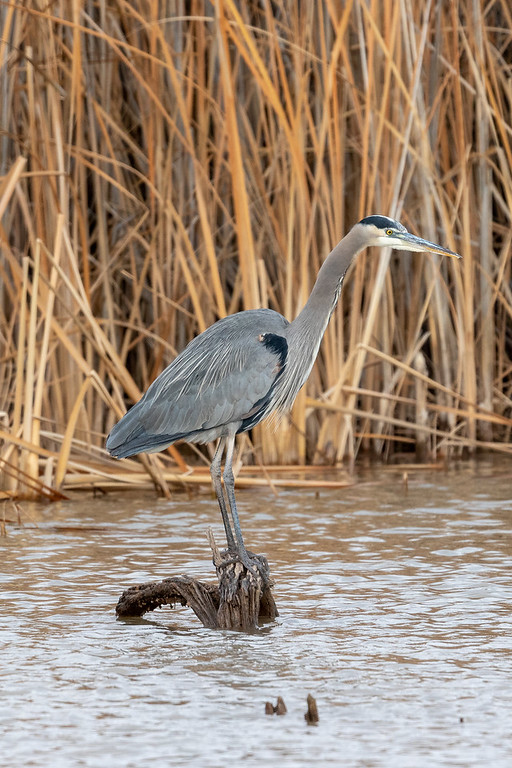 Not a great shot, but didn't expect to see a pheasant. 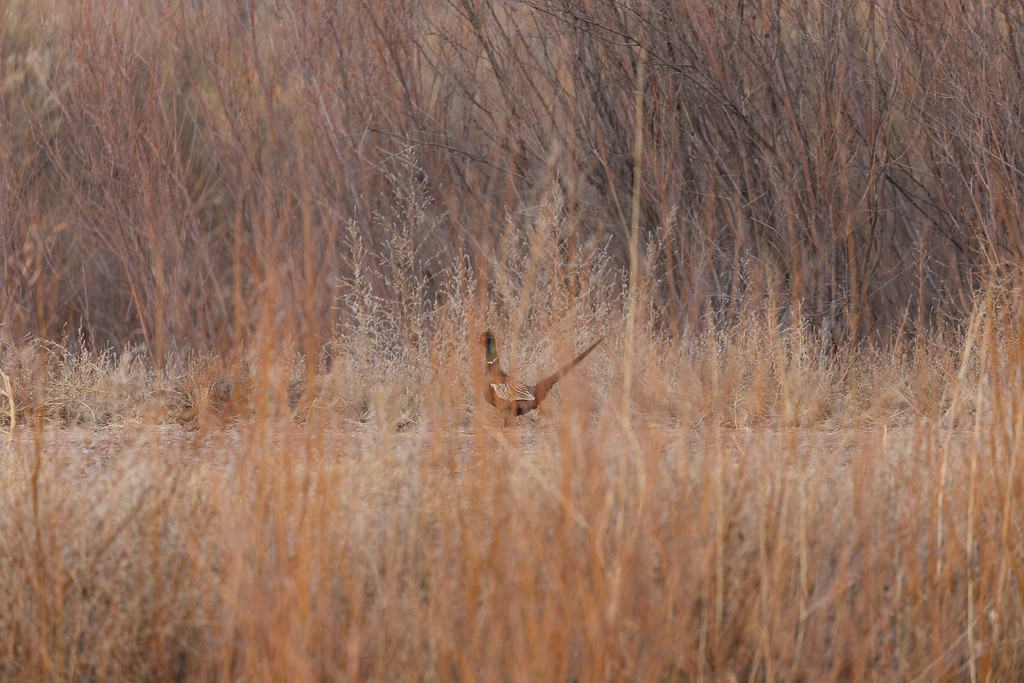 I include this because it was with the monster 600mm lens and teleconverter at very close range. Norther Shoveler. 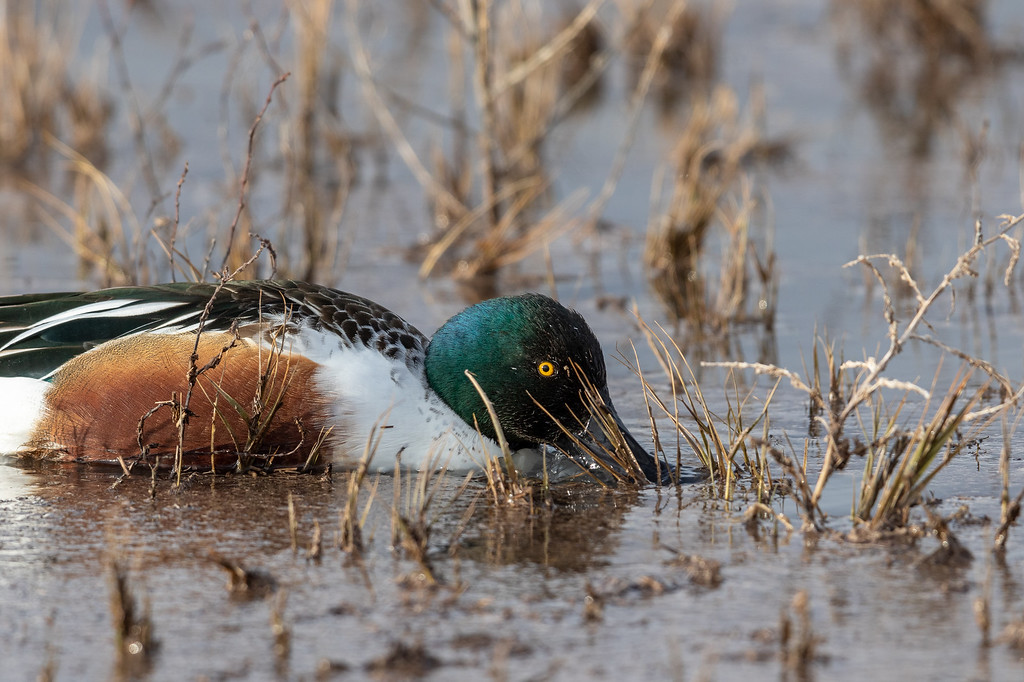 Oddly, the asian photographers near us backed up when this coot came out of the water and ambled by. 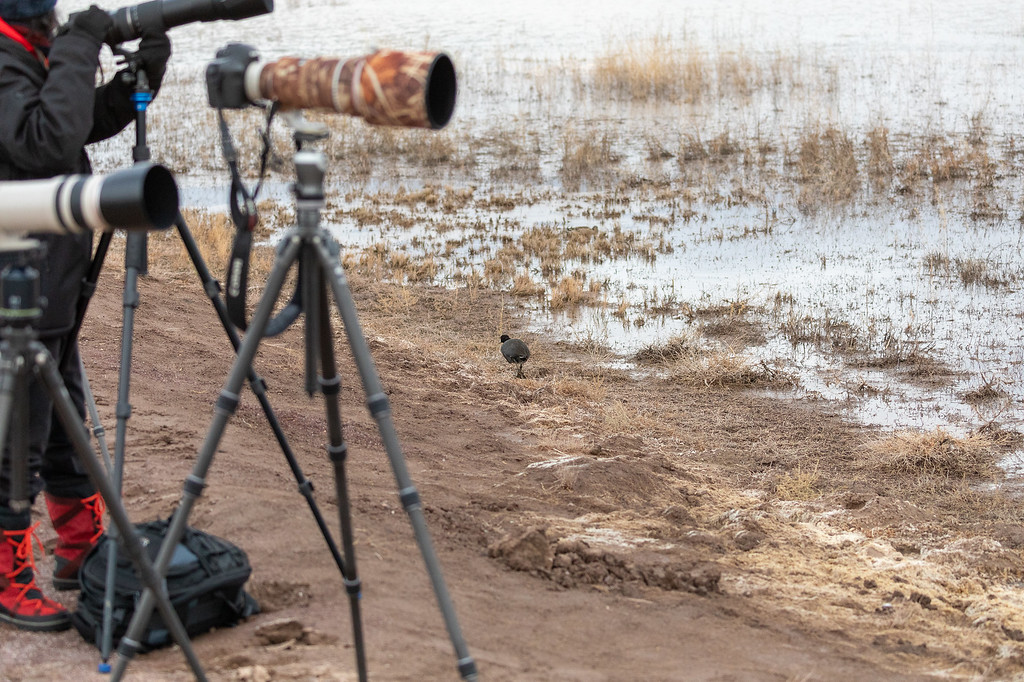 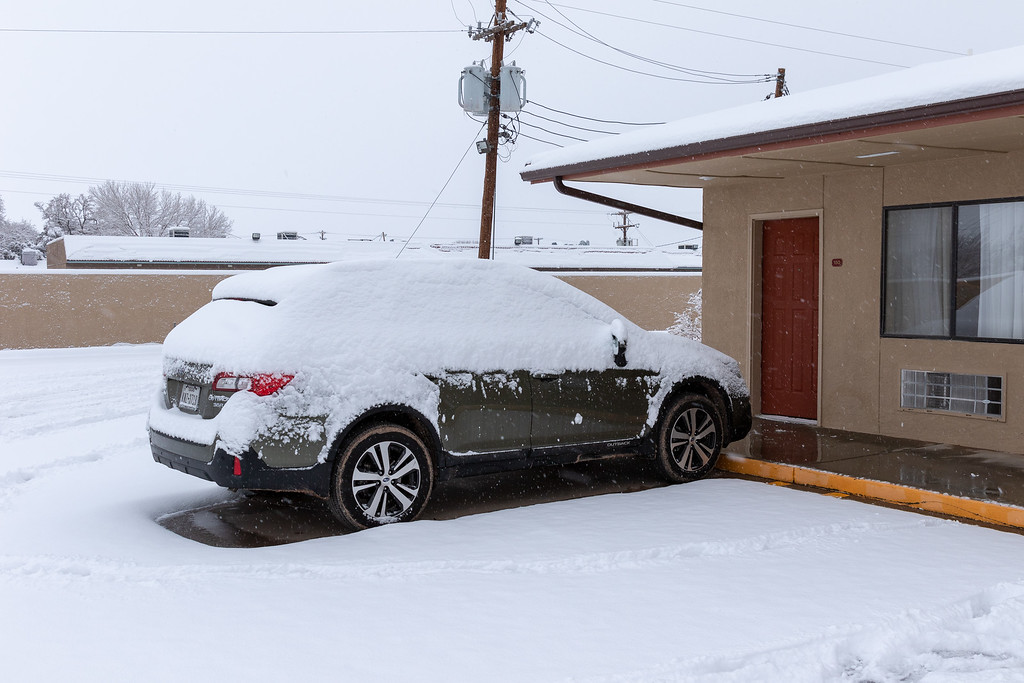 Katie and I decided to hang around the hotel and wait for a report from Scott and Kyle. The refuge was open, but snow on the roads. So we hung out and played in town.

The mountains in the foreground of my first picture are now covered. 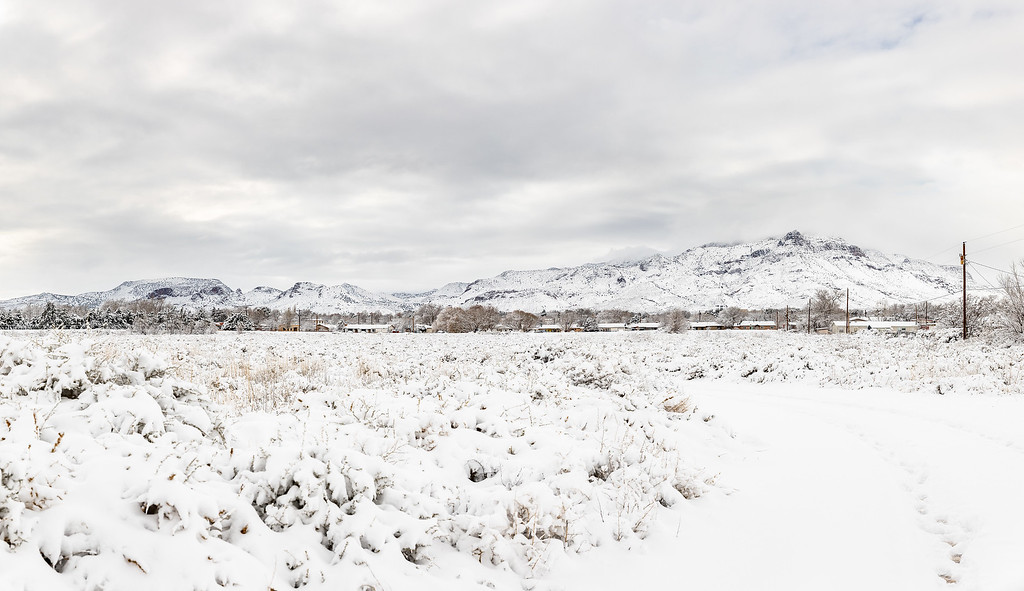 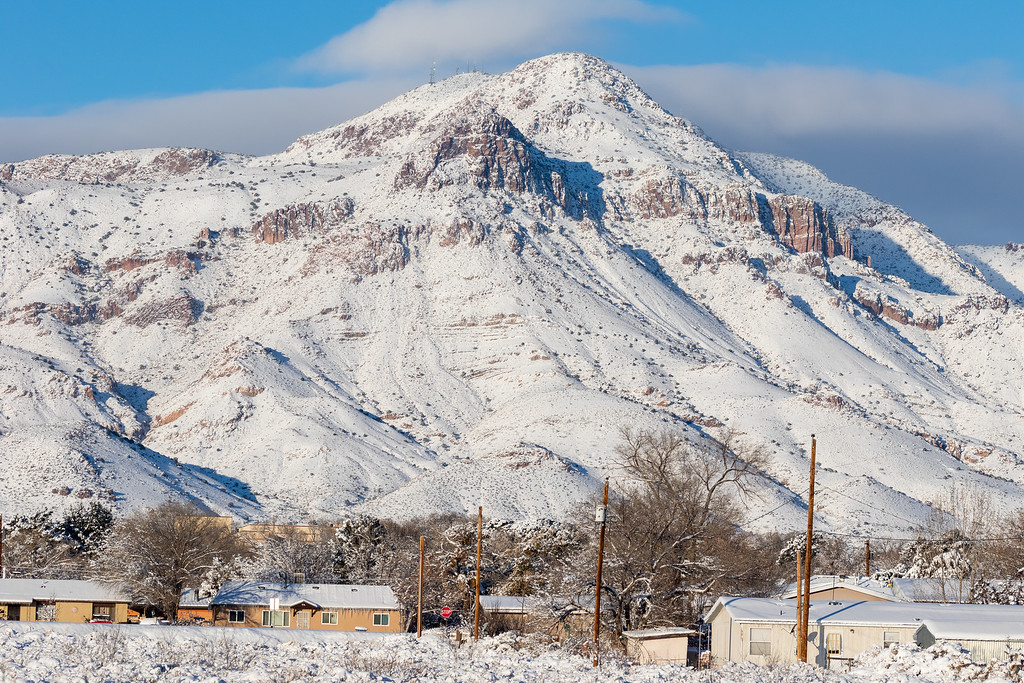 And that was pretty much all worth showing for that day. I did a lot of macro and artistic shots. Well, maybe better called attempts than shots. Goofball decided to do a forward snow angel. Yes, that means face first and yes, I filmed it. Made a perfect snow angel that way though.

A bit brisk in the morning at 9 degrees, but it was a dry cold...so your snot froze quickly.

This is the crane pond, just outside the refuge. The refuge was now closed to vehicles because the only two people working had to spend time pulling dead birds out of ponds instead of stupid drivers out of ditches like the day before. Yes, apparently sliding off a flat road with a speed limit of 20mph is a thing.

Off for a snow hike. Katie is happy in the cold if she is doing something, but she isn't a photographer. Something had to give and it was me. I carried a camera on the hike though. 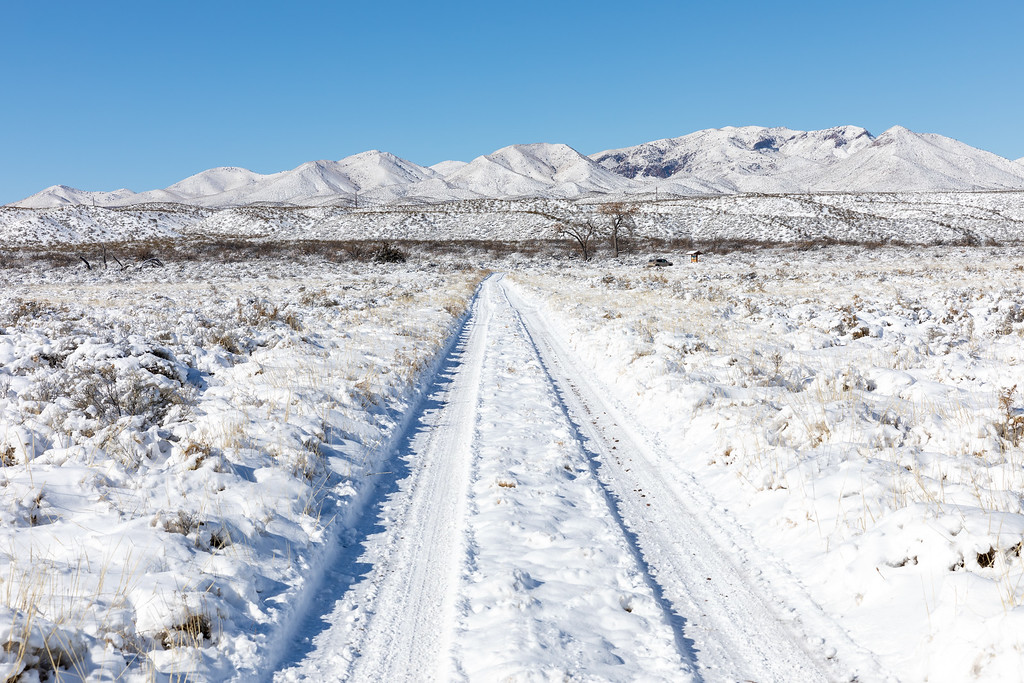 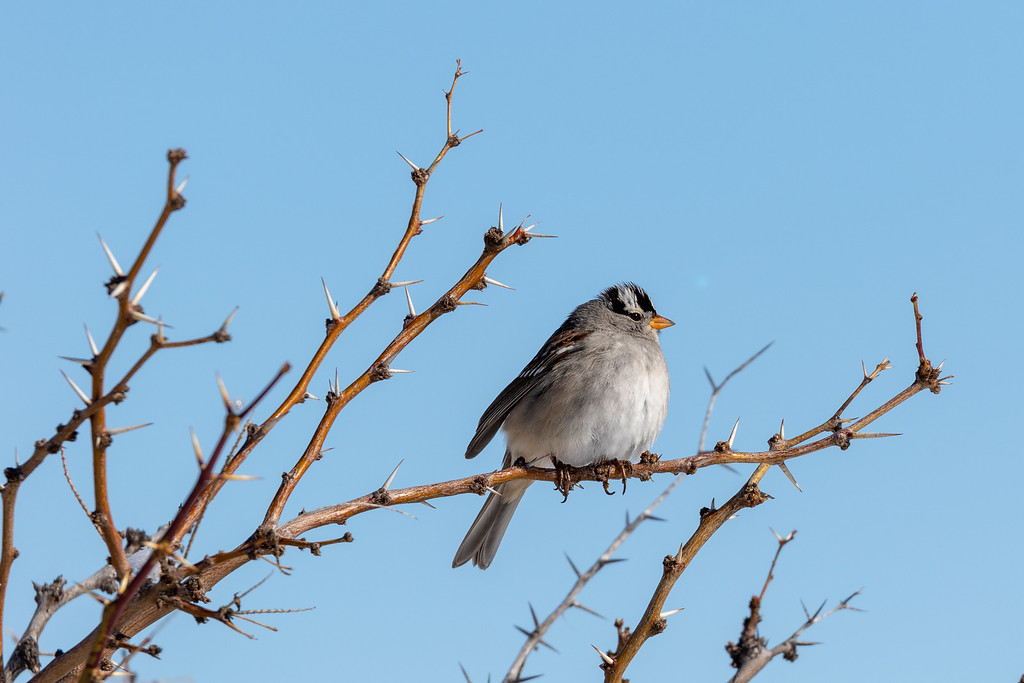 Later in the day we went to a state run wildlife refuge. No unique pictures there, but it was very nicely set up. I dropped Katie at the hotel and headed back to Bosque to meet the guys. To set the stage for the last evening, the sandhill cranes usually sleep standing in this large, shallow pond. That way they are aware of predators sneaking up on them. However, this pond was now iced over. Which made for some interesting landings as the came in for the evening. 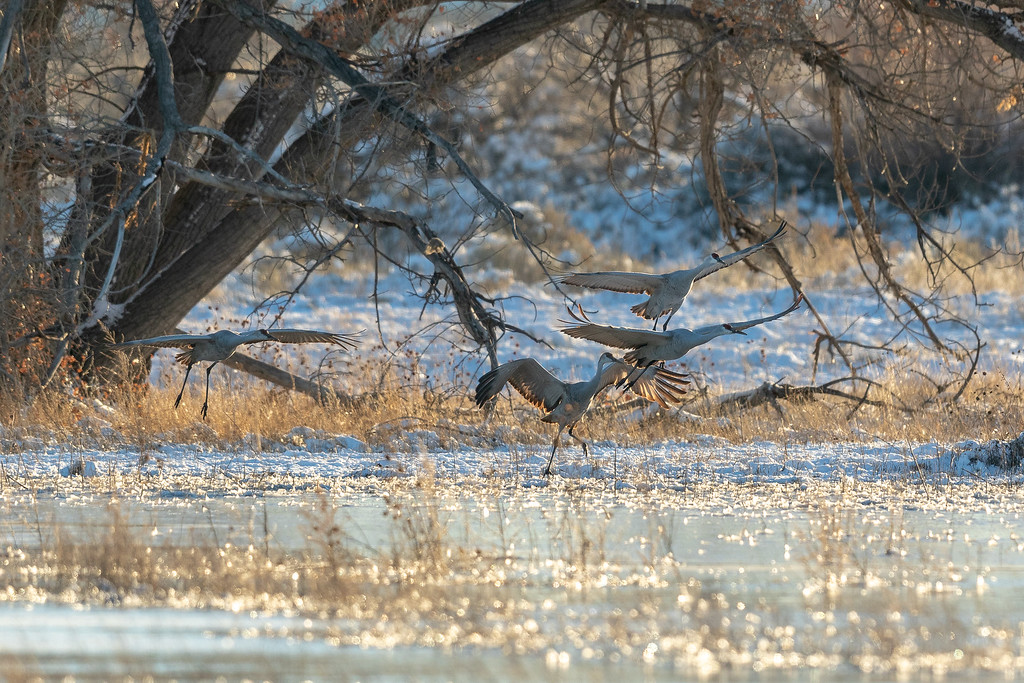 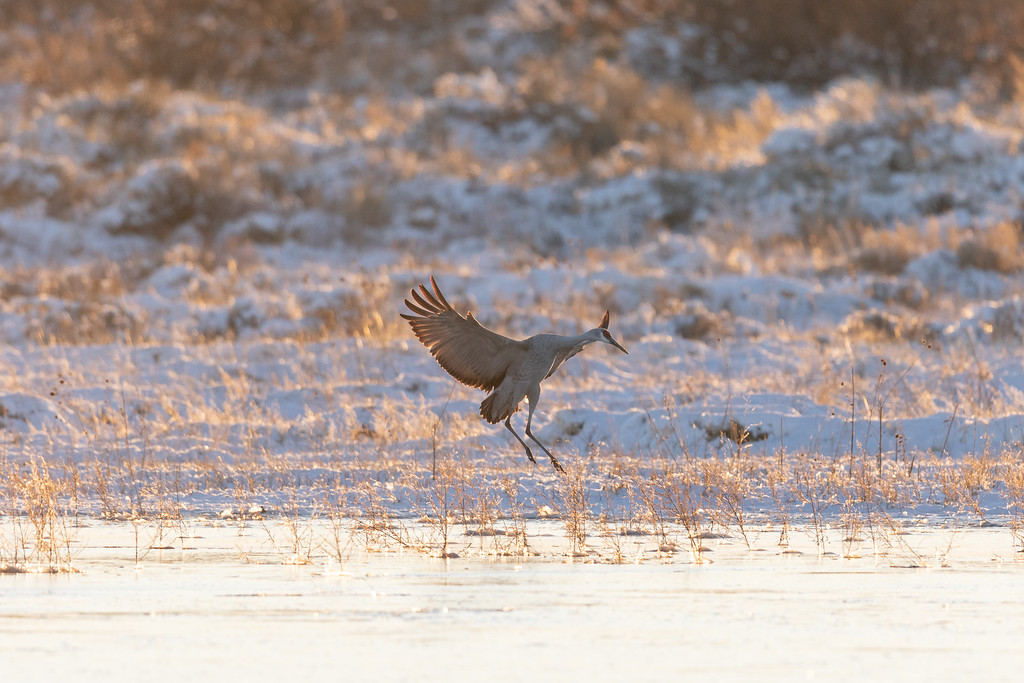 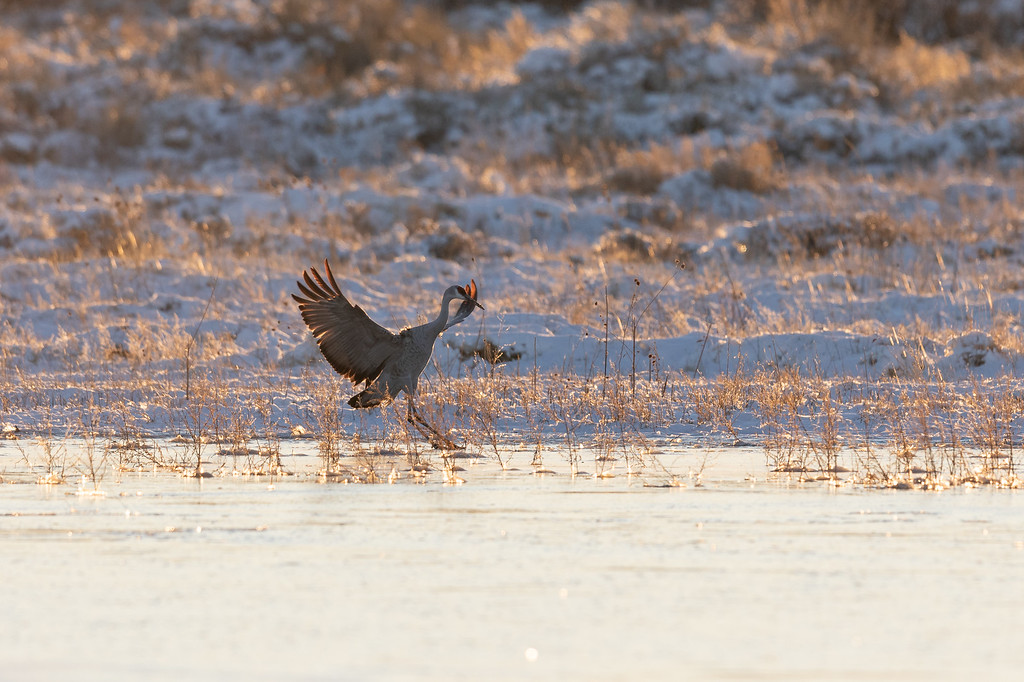 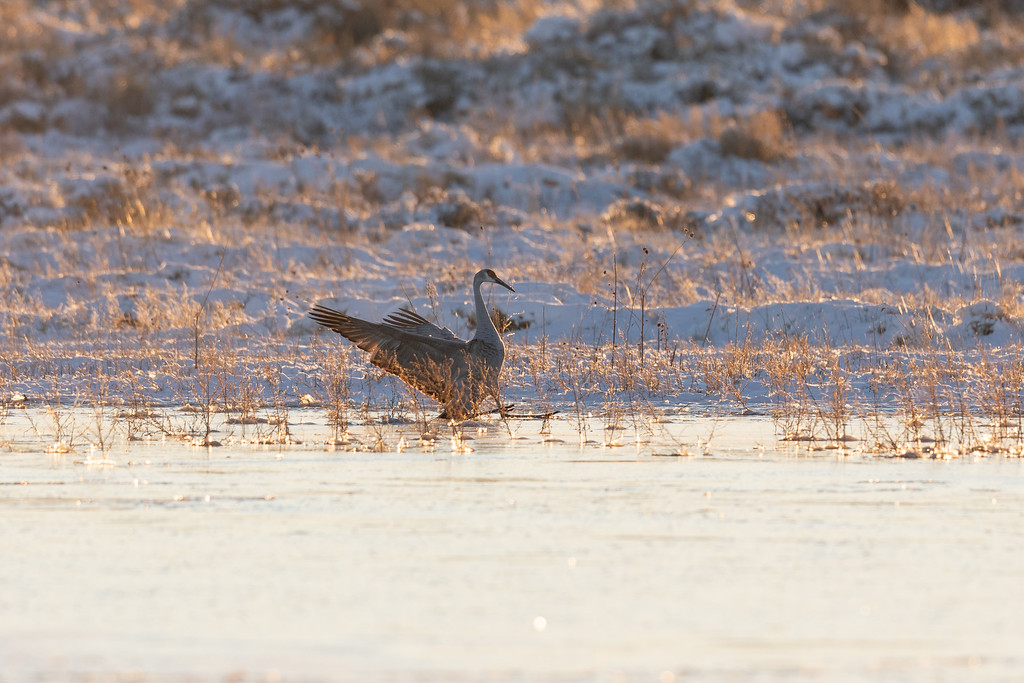 The best of my sunset shots: 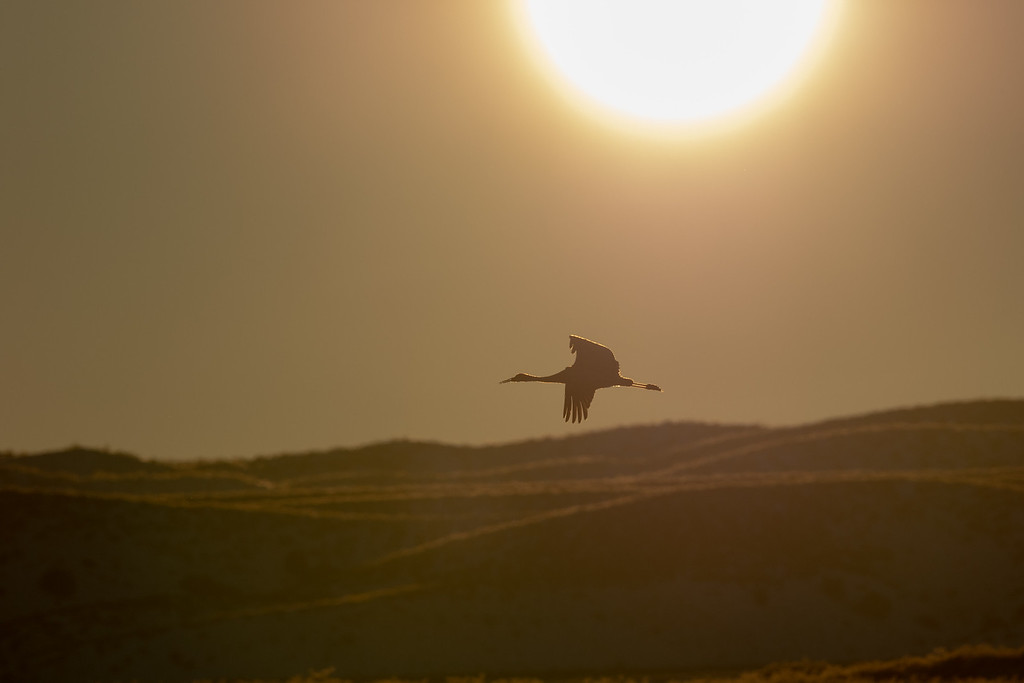 And one last sandhill crane shot to close out the pictures: 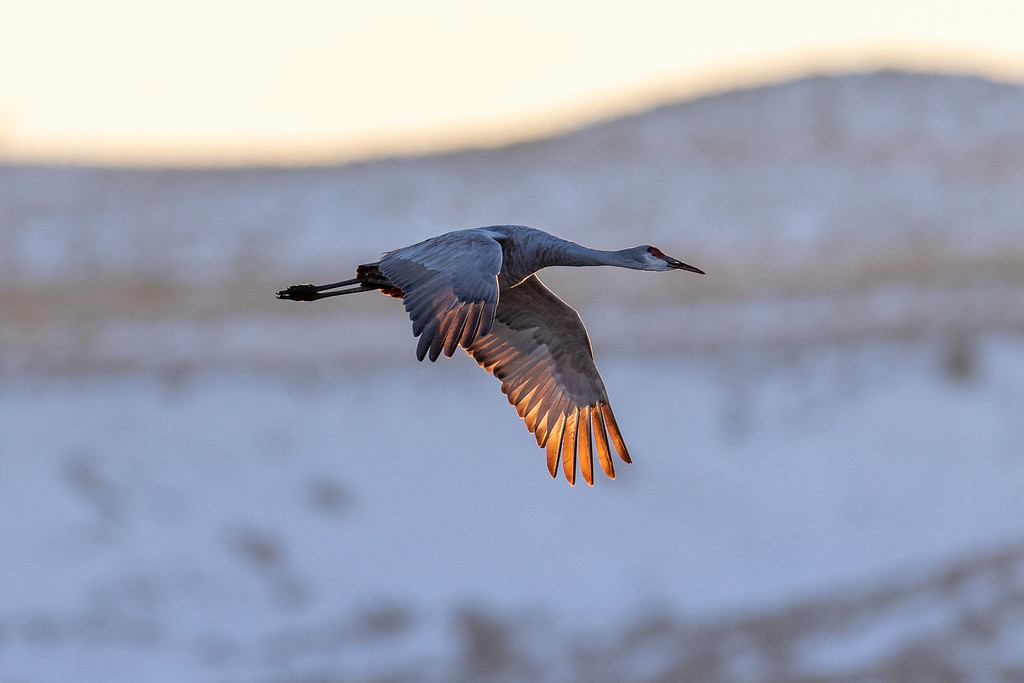 The trip home the next day was long. We opted for the direct route over the mountains since we'd heard it might still be bad on the interstate headed south. Our route was okay, but much of the time in the mountains was taking it easy since there were many snow packed sections. My car was a mess until we hit the outskirts of Austin and the rain started. It was amazingly clean by the time we got home.

Hope you enjoyed the write up and the pictures.

These are really really nice. Love the snow in the shots as it tells a story unto itself, a very cold story. Tell us about the gear rental provider and and pro’s/con’s and woulda/coulda/shoulda, or gonna do next time you go?

The detail on the Northern Shoveler is amazing...

What sort of expense is it to get into camera equipment capable of taking those shots?

What sort of expense is it to get into camera equipment capable of taking those shots?
Click to expand...

Surprisingly not as much as you'd think. I've slowly upgraded over the years, but my original DSLR with medium to good lenses would have captured good images. It would have had a slower autofocus and framerate, but still capable. A little more patience and planning to get close is all. A sub $1000 dollar setup would be a decent start. It's hard to cover all the details of what you need and what the options are in a forum post though.

These are really really nice. Love the snow in the shots as it tells a story unto itself, a very cold story. Tell us about the gear rental provider and and pro’s/con’s and woulda/coulda/shoulda, or gonna do next time you go?
Click to expand...

Lensrental.com. Very good experience. I was debating about renting the Canon L 600mm IS II (L = pro, IS image stablization), but talked myself out of it initially. Since I'd have to ship it to Phoenix a couple of days early it was going to cost extra. Then they had a special offer of 7 days free rental if you kept it for 9 or more days and it had to cover Dec 24th - Jan 1. timeframe. I guess that was so they could run a small staff over the holidays. That swung the decision meter back to renting it. Now, 7 days free doesn't mean the insurance was free for that period and since it was a $11,000+ lens, I wasn't going to rent without full replacement coverage. Shipping was another cost. Fedex or UPS two day, both ways. So with the rental, shipping ($30) and insurance, it was still almost $400 for the whole 9 days I had it. And because of travel days and Christmas, I really only shot with it 5 days.

The rental process was smooth. I created an account at Lensrental.com. Picked the lens and insurance. Should have gotten a polarizer filter though. And then they sent an order in "waiting" status. They did a couple of extra confirmation steps to make sure I was a legit person. So I had to give them my work email and respond to an email they sent there. All smooth and not surprising since I was renting one of their most expensive lenses and it was the first time I'd rented from them.

I was supposed to get it by the 24th (Monday), but they ship to make sure it will arrive on time and it actually arrived on the 22nd. We got to Phoenix on the 23ed so I had the whole day of the 24th to play with it. It came packed in a large, extra thick, cardboard box with printed tape showing which lines to cut to open it. Inside was a very substantial padded lens case that was surrounded by a foam insert. So well packed. The lens case had a strap if you wanted to carry it. Lens was as it comes from Canon, hood and everything. Inside the box were a return shipping label so all you had to do was drop it off at a Fedex shipper (and get receipt) to send it back. Plus it had precut tape for re-sealing the box. So it was a pretty well thought out set up.

If I rent again though, I'll plan for fewer travel days while I have it. You can ship it back from anywhere though, so the receiving side is the only worry.

Always amazed how people figure out ways to make money in our free capitalist economy ! Any thing you want we got it right here in the USA.

Yep. For me it was a chance to play with a lens that I'll never be able to afford. I could see even using it if I were a pro and only needed it a couple of times a year too.

Thanks for sharing your trip and shots! I certainly enjoyed it and you came home with some great shots.

Wowzer. Much improved over last year IMO. (not that 2017 was bad, but 2018 is off the charts crisp/colorful)

I still need to finish processing mine. Doh!

Wow , just saw this. Beautiful photography and the bird shots made me head to the fridge for some left over BBQ chicken. Snow geese, a sight to behold.

Great shots Rusty and our goofballs add a lot of entertainment.