bwdmax said:
Thanks for the updates. You give me exactly what I’m looking for without having to dig. I’ll go dig later, but the summary keeps me going.
Click to expand...

Gary,
Here are the highlights from today. Some really good bike footage, although not enough.

Those dunes are really pushed up to a sharp peak. That takes lots of mental and physical stamina to keep cresting unknown dunes like mad man.
J

bwdmax said:
Those dunes are really pushed up to a sharp peak. That takes lots of mental and physical stamina to keep cresting unknown dunes like mad man.
Click to expand...

The cameras did not catch it on that highlight, but I am seeing the top riders actually throw the bikes sideways and "scrub" the peaks of those dune jumps like motocrossers do to stay low. Not laying it flat like the MX guys do but still. Pretty remarkable and takes a lot of talent to do that on a Rally bike.

You always do a parallel check at the crest of each dune to safely cross. Doesn’t take any extra energy. It’s just safety first.
J

Stage 9 was a short stage/short test so not much opportunity to make up time. Top three riders were less than two minutes apart and the top nine riders covered by five minutes. Ricky Brabec was 3rd in the stage but is not able to make up the time on the leaders and remains well over 30 minutes behind in the overall. Shorty had a good stage nine and is back to top American at 8th overall, Brabec and Klein are right around the same amount of time back in 10th and 11th. It appears the winner will come from one of the top six riders in the overall standing as of today, as they are covered by 11 minutes or so. The top four are less than four minutes apart in the overall. Remarkable after so much racing. Overall standings as of today are Walkner, Sunderland and VanBeveren. KTM, Gas Gas and Yamaha. Factory Hondas are right there ready to take a top spot as well.

Not likely that any of the Americans can make up their time, but who knows what the organization has in store for the final few stages.

Picture for today: The sun is setting on any American's chances for a podium. 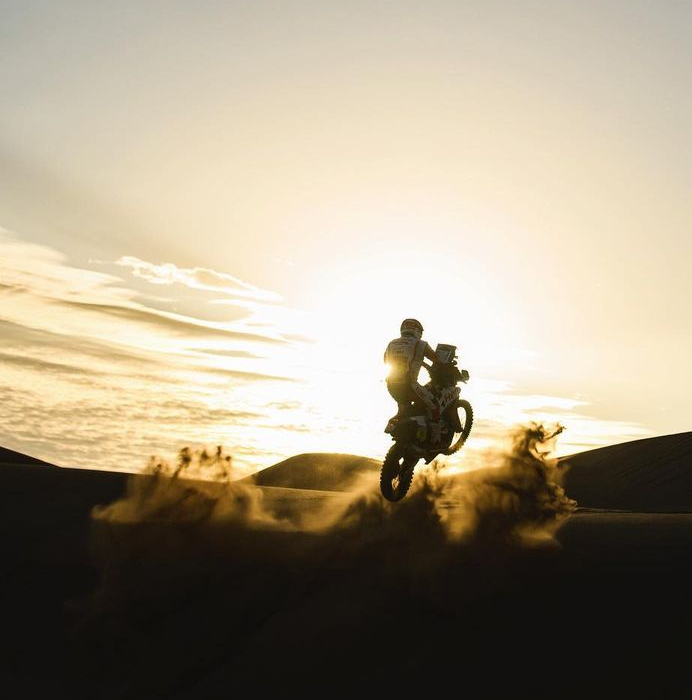 Stage 10 in the book with some shake ups. Factory KTM Kevin Benavides is out with engine issues. He won Dakar last year on a Honda. Walkner and Sunderland had issues, I guess navigation issues, and lost time but still in the top 5. Top five for the overall standings are Van Beveren (France), Quintanilla (Chile), Sunderland (GBR), Walkner (Austrian) and notably Joan Barreda. Barreda, from Spain, has won close to 30 stages of the Dakar over the years but never finished better than 5th overall. Something always happens to him when he is in position to win, namely big crashes, running out of fuel, mechanical issues or penalties. In fact this year, he is said to be riding with a broken collarbone for the past several stages. I think I am rooting for Barreda now, although he has to make up eight minutes.

Americans are 7th, 8th and 9th overall--Shorty, Klein and Brabec. Toby Price won Stage 10 and has moved in to sixth overall, but he is most likely too far back to factor in the podium, plus he has to open stage 11 tomorrow since he won today. Really hard to have no tracks to follow and make up time as well. Basically impossible.

So the picture of the day is of Van Beveren, leading the 2022 Dakar overall with just two stages to go, on the Factory Yamaha. 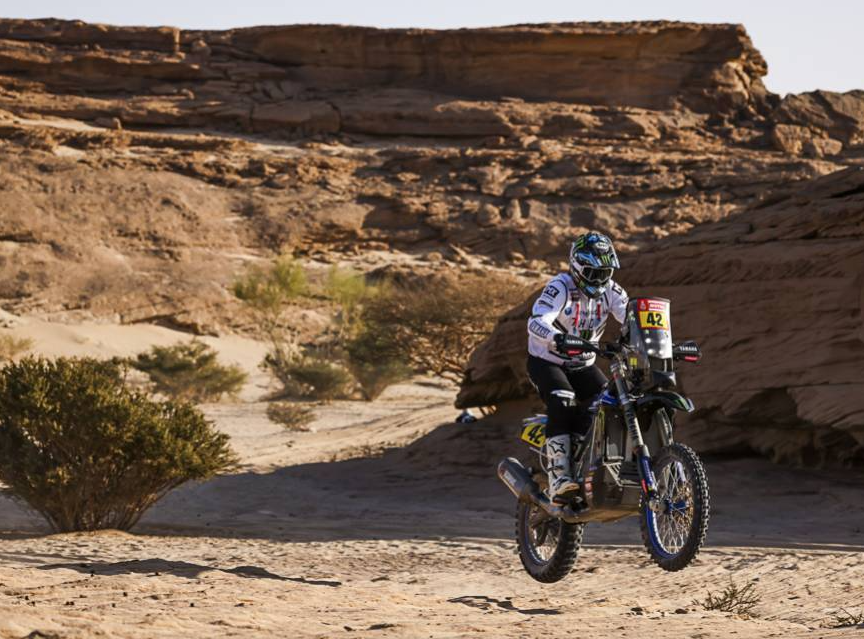 Thanks for another great summary.
J

Late wrap up today of stage 11 as I was trying to gather more info. The yo-yo effect of opening a stage then dropping time and conversely starting back in the pack and gaining time has presented itself once again. Price, Joan Barreda and Van Beveren all lost a large amount of time in stage 11. Price and VB both claim that they were on course but a waypoint would not register. No news from the organizers on this claim, so I assume it stands.

So, Sunderland is back in first in the overall standings, followed by his brother in law on the Honda Quintanilla (+7 minutes). Walkner in 3rd also about 7 minutes down, followed by AVB (+15) and Joan Barreda at +28. 6th, 8th and 9th are the Americans Brabec, Short and Klein respectively. Brabec made up some time in stage 11 but most likely is too far back to factor in the podium, although with a fast mistake-free ride he could end up top five. Three Americans in the top 10 is nice too. Hope it helps Rally racing gain more popularity here.

Stage 12, the final stage, is only a 167 KM test. Sunderland will now be leading out, and you know how that has gone for the first riders out. So anything could happen but most likely the winner will be one of the top four in the overall. Stage 12 starts in just a few hours SA time.


Picture for the Day: Hold on (Both feet off the pegs and right hand off the bar. Yikes). It is going to be a wild finish. 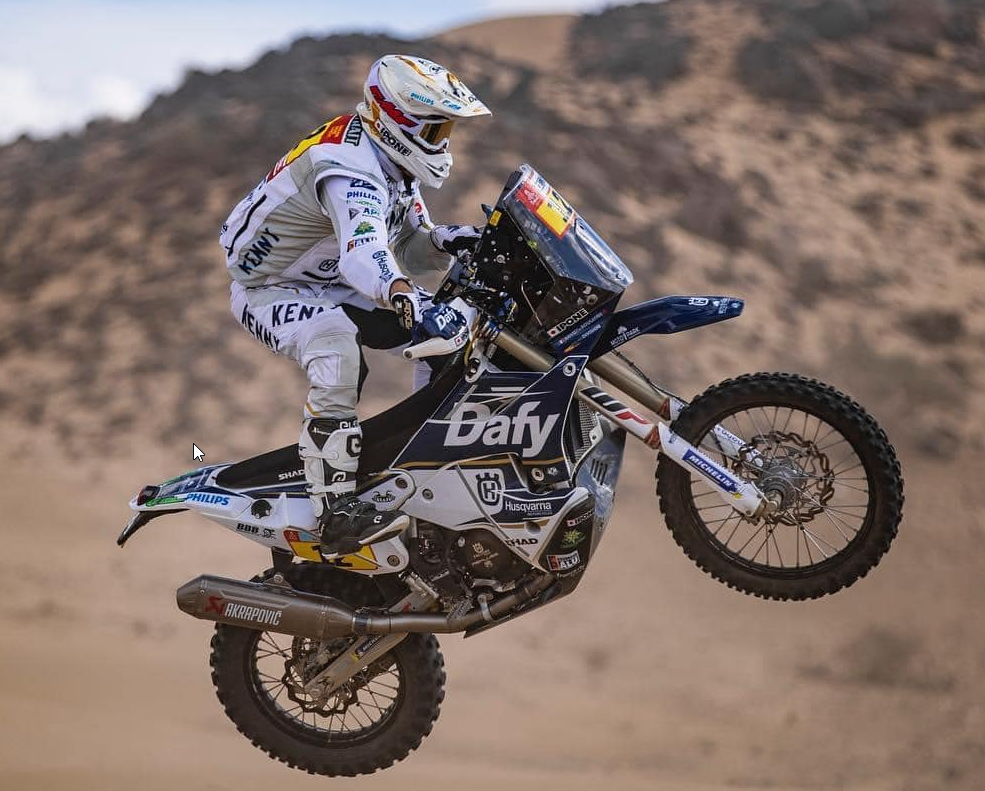 Yes sir. The closest overall Dakar in almost 20 years I believe. Top three, Sunderland (GG), Quintanilla (Honda) and Walkner (KTM) all covered by less than seven minutes and the top two by three minutes. This after almost 2500 miles of special tests, not counting the liaison mileage. First win win for Gas Gas, although as of now for the Rally bikes, the Gas Gas is a 100% KTM through and through, right down to the KTM VIN sticker visible on the frame.

Americans Brabec, Short and Klein 7th, 8th and 9th respectively overall. I have noted it a few times since I started these daily updates, but the ride that 20 year old Mason Klein had, as a Rally2 participant (non-pro) and rookie on a club team KTM was amazing. His ability to navigate with accuracy and still ride at an elite level will most likely have him on a factory KTM next year, or another brand's factory team.

Quick takeaways from this year's race: There are more riders than ever that ride at an elite level. In years prior you could say the winner was going to come from a few riders. Now there are 10 riders that have the pace and many more that are not far behind. Speaking of pace--it is getting quicker. It is now almost 20 years since the big twins ruled the desert, and now the rapid evolvement of the 450 rally bikes have them faster than ever. So much for trying to slow things down. That horse left the barn.

This year the rules allowed riders that did not finish a stage to re-enter the race at the next stage, although they were not in consideration for the overall. So, for the last stage today, we had Kevin Benavides on the factory KTM, who blew his engine up in stage 10, re-enter and win stage 11, and then start first for stage 12. What a nice turn of events for KTM as Benavides was able to work with Sunderland to navigate the way at the end. Dakar purists are not big on the whole re-entry thing and I understand.

Last pic: Happy winner and runner up (Brother in Laws by the way). 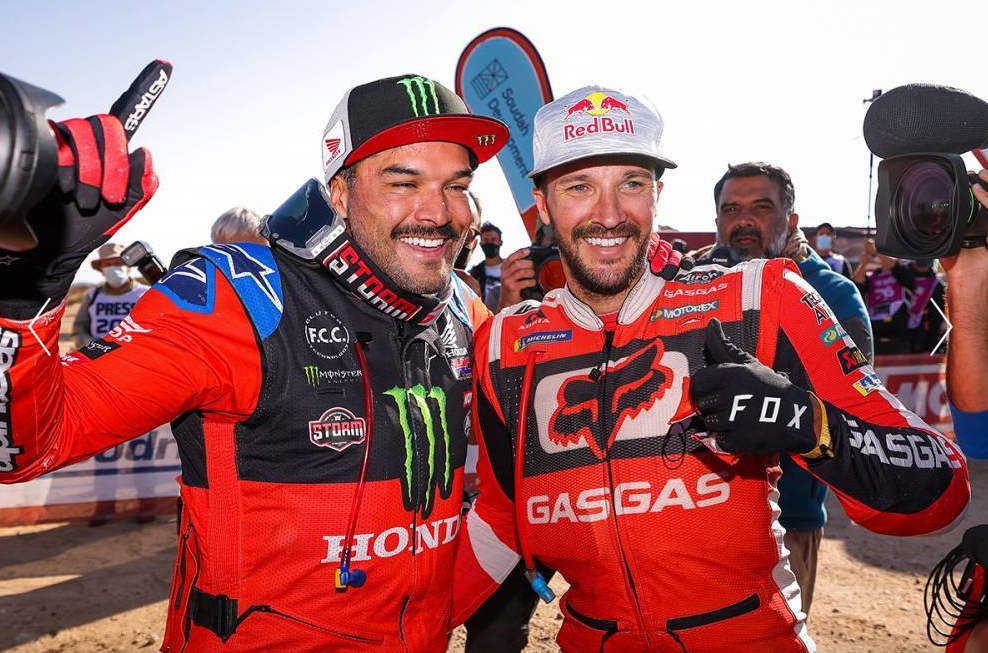 If you are unsure of the motorcycle skills of 2022 Dakar winner Sam Sunderland, then watch this. This is one of the better Red Bull shorts I have seen in a while.

Yep. My favorite part is when he goes through the tunnel in the Aquarium and looks around at the fish.
Last edited: Saturday at 2:55 PM