First Of the Year Walkabout 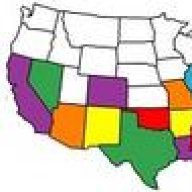 First if the Year Walkabout

January 2nd
After some delays, I finally got the chance to embark on a little solo ride to see if I could freeze my *** off. Destination: Mt. Magazine State Park, Arkansas. This day was relatively nondescript. I was delayed by traffic in Shreveport, LA and had to ride about 50 miles after dark. When I reached I-30 at Hope, AR the temperature was 28f. My feet already knew that. I got a room there for the night.

January 3rd
I wanted to get an early start so I started packing at 7:45am. I walked outside to find the thermometer reading 22 degrees. The continental breakfast in the lobby started looking pretty darn appealing. I enjoyed a cheese danish, bowl of raisin bran and coffee and by 9:30 the temp had climbed another 10 degrees. I plugged in my new homemade heated glove and jacket liners (they performed beautifully but I should have wired my socks too) and hit the road. The fun started just north of Hot Springs on Arkansas Scenic Byway 7.

I had to stop and pull out the camera several times. As I approached Ola, AR I encountered a few patches of snow on the side of the roadway. I rode into Havana, AR which has Mt. Magazine as a backdrop. Beautiful!
Mt. Magazine is the highest point in Arkansas (or anywhere else around here) at 2700ft. Mt. Magazine Scenic Byway 309 is an awesome ride. Much of the park was covered in a beautiful blanket of snow. At 2:00pm the temp was 35 and the sky was clear and sunny. 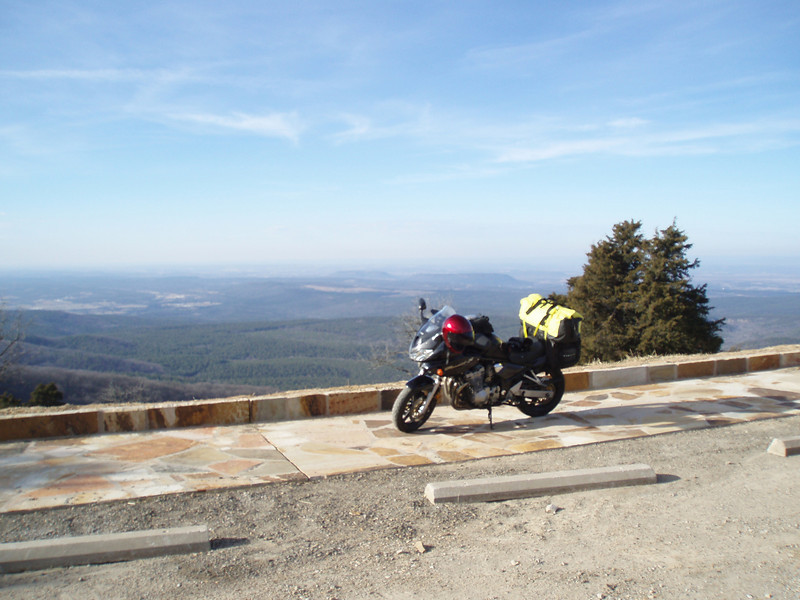 I continued north on 309 to Paris, AR and just had to turn around and ride it again. I even did a little exploring on Green Bench Rd. I concluded the day with a ride down AR 109 and a gorgeous view of the westward side of the mountain. 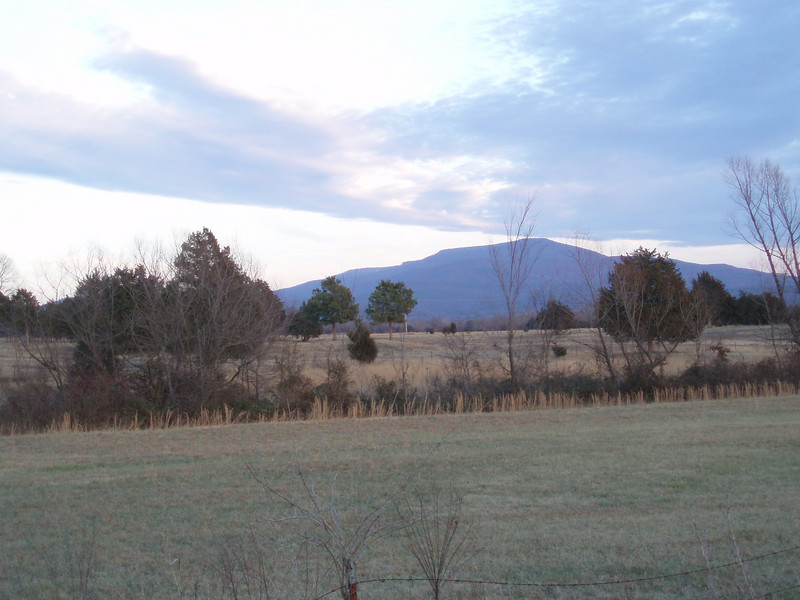 January 4th
I headed west on AR 10, AR 252 & AR 96 to Hartford and tried to ride to the top of Arkansas' 3rd tallest peak but Mt. Poteau Road wasn't paved so I settled for a few pictures and turned back. It was another gorgeous sunny day and a little warmer too. I had to unplug the jacket around 10:00am. The next point of interest was Oklahoma's Talimena Scenic Drive. Fabulous! 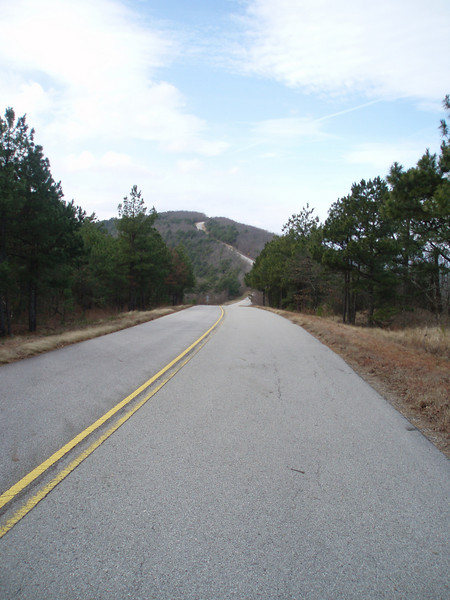 I had the whole place to myself too - not a single vehicle to interrupt my pleasure riding and picture taking. I stopped for lunch in Talhina and then rode AR 82 north to Stigler. 82 may not be as picturesque as The Talimena Drive but it's a great road for riding with wide shoulders, sweeping turns and a few switchbacks. 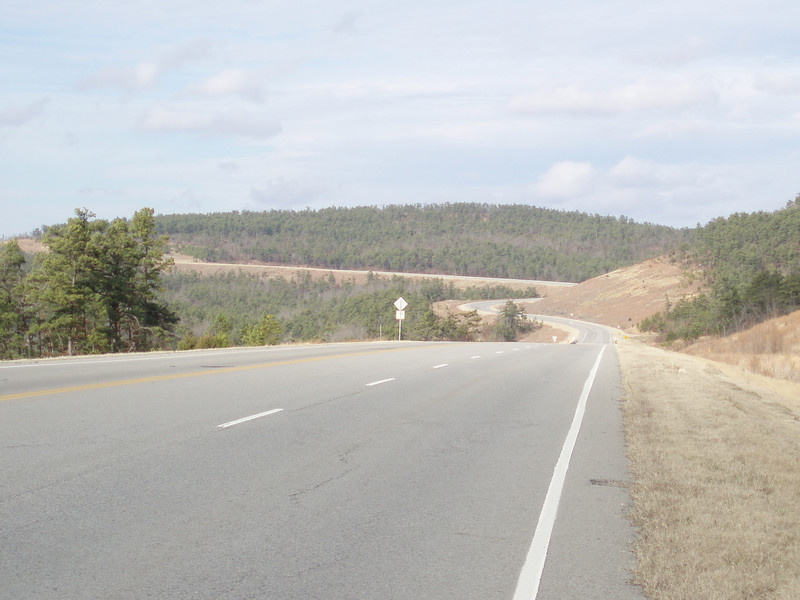 AR 2 is a nice ride also but I didn't stop for any pictures as I needed to get as far south as possible before dark. From the south, strong winds had blown some nasty looking clouds my way. I made it to Antlers, OK at dusk just as a light rain started to fall. Now I may not be the sharpest knife in the drawer but there was something funny about riding a motorcycle through a place called "Antlers" Oklahoma in the rain after dark. I stopped there for the night.

January 5th
Still warmer today. I set out at 8:00am and the temperature was already close to 60f. I would have gladly welcomed the freezing temps in place of the fierce southerly wind that turned my pleasure ride into work the entire day. My return trip route had changed to take me through Denton and College Station to see my son and daughter. I left Denton at 2:00pm with liners out and vents open. 75 degrees! Go figure! The head wind on I-35 was horrendous. My little Bandit had to work to cut through it and ran about 20 fewer miles on a tank of gas than usual. After a quick stop in Waco the unforeseen happened. As I approached a poorly marked intersection at about 35mph I noticed the pickup coming toward me was not going to stop. I got on the brakes hard. I don't remember deciding to lay the bike down but I knew I couldn't stop in time. I slowed as much as possible then dropped the bike about a third of the way into the intersection. Thankfully, that gave the truck enough room to pass. I went down on my left side and thanks to my armored gear and particularly the hip pad in my touring pants there's not a mark on me. It was warm in Denton and I actually thought about making this ride in jeans but luckily took the extra few minutes to unzip the thermal liner and put the riding pants back on. Look, I know this was only a tap on the shoulder but without the safety gear I might not have been able to get up and ride another 100 miles. So please think about this the next time you feel like your gear is too hot or uncomfortable. I'm sure I'm preaching to the choir here but If you don't ride with CE approved knee, hip, elbow, shoulder and back armor - go buy it - no excuses! The Bandit suffered only the most minimal damage, a turn signal and a few scratches. the soft bags absorbed a lot of the fall. My new DL650 handguard took the brunt of the accident with only a deep scratch! The clutch lever was totally unscathed! After giving the bike a careful examination, I got back in the saddle and rode on to College Station. Sure I'm a little sore but that may be due in part to fighting the wind for 300 miles. I clocked a total of 1366 miles. This has been a wonderful ride. I wouldn't trade my riding experiences for anything. 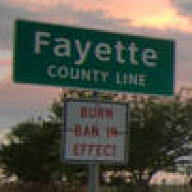 Grear RR and pics kp. I'm planning a trip on my 650 to Arkansas this summer when I visit my cousin in Mc Alester,OK.

Rman of 237 said:
Grear RR and pics kp. I'm planning a trip on my 650 to Arkansas this summer when I visit my cousin in Mc Alester,OK.

Did the pickup stop?

Texfire said:
Did the pickup stop?
Click to expand...

Yeah, briefly, about 300yds down the road and then pulled away. I jumped to my feet and instinctively started directing traffic away from my bike until another motorist stopped and helped me stand it up again. I idled into a parking lot to give it a once over, clipped the wire to my dangling turn signal and I was on my way. The whole thing was over before I even had time to get scared. The best I can figure is that a stop sign must have been taken out earlier. A mile or two down the road I saw a trooper giving me a long look. Someone must have called it in. 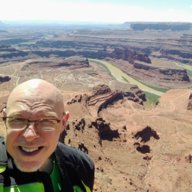 **** pick-ups these days seem to have a thing out for bikes. I was involved in a near miss SUnday night here in Houston. Laid down my V-Strom on the left side. Not much damage to bike. I'm sore and my ego is a bit too.

Like your photos and trip report...except for the Denton thing

**** pick-ups these days seem to have a thing out for bikes.
Click to expand...


Good to hear you're ok too! 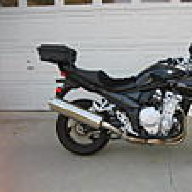 WOW, great ride experience and almost got wiped out. Your quick thinking and actions saved your life. Its moments like that I start thinking if biking is worth it, sometimes.

Anyway, can you tell me what gear you are wearing because your winter gear took you to places that look really cold and managed to save your hide also.

Thanks hondapc, I'd be happy to. Keep in mind that one brand is not safer than the next as long as you're talking about CE rated armor & pads on shoulders, back, elbows, hips & knees. I didn't get all this gear all at once either, that would be daunting. I went from an old helmet and almost no gear to some used stuff I got on ebay and replaced it with new "good" gear one piece at a time.

No preaching here but I made a personal decision about a year ago to go full 100% ATTGAT (All The Gear All The Time) and now it has become a habit. My goal for this past summer was to make myself wear the armored mesh pants (in addition to the rest of the gear) every time I got on the highway. I only run short errands in jeans.

Anyway, it's not about being tough, IMHO, it's all about having the right gear, then riding "season" doesn't have to end.

thanks for the info as I am ready for buying up my gear but **** these stuff really cost a big $$$.

I want to buy the right stuff the first time instead of lot of stuff and finding later that they don't quite measure up in certain wheather or temp.