About a month ago I got a call from Brian Johnson at TJ's Cycles in Austin, wanting to sponsor a dual sport ride. After some discussion we decided that Saturday, Nov 8th would be the day.

Tom, Brian, and the Team at TJ's did a great job this morning - they really rolled out the red carpet for us by opening the store an hour early, having a couple of vendors set up in front of the store, and providing breakfast for all. Thank you very much from all of us!!!

TJ's new store. If you haven't been there yet, it's worth the trip. 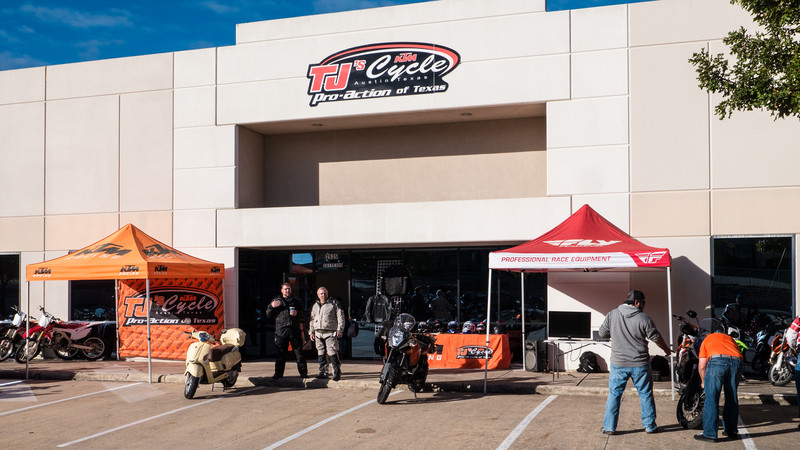 Breakfast was set up and ready to go at 8am 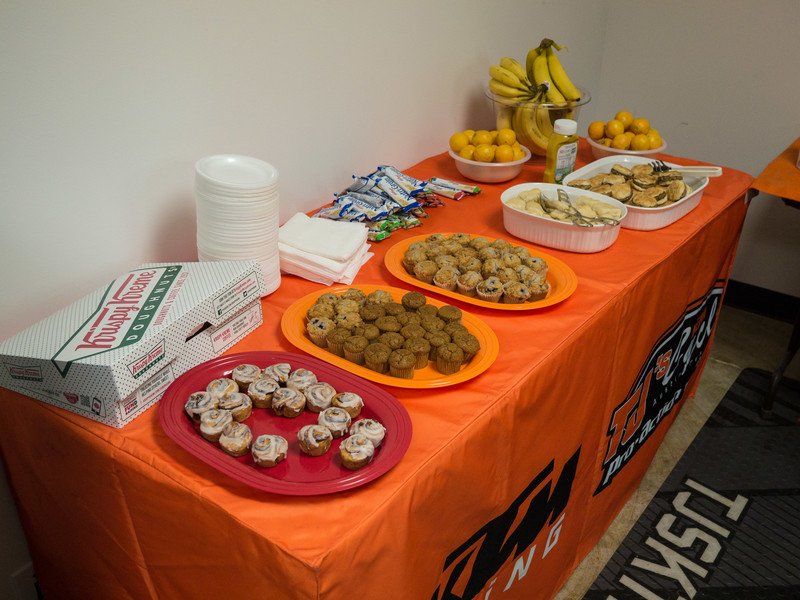 The store is full of motorcycles! If you like dirt bikes, they've got one for you. 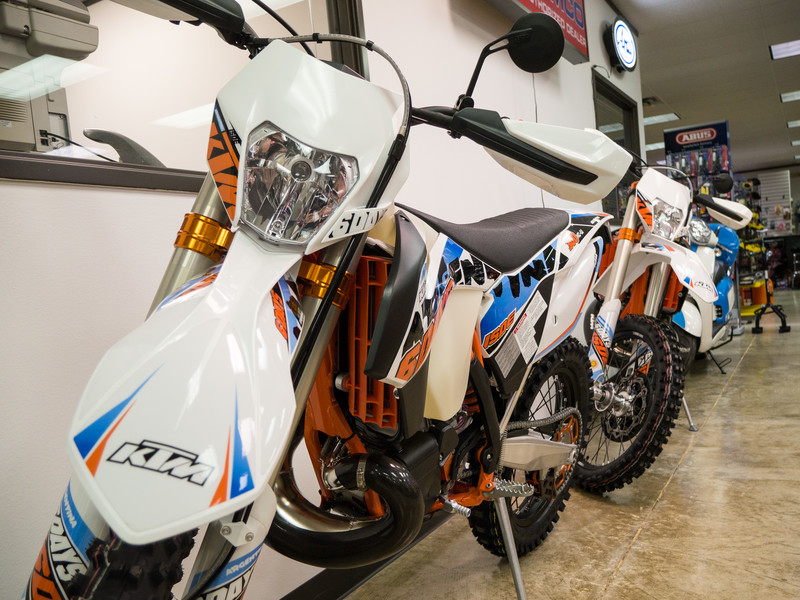 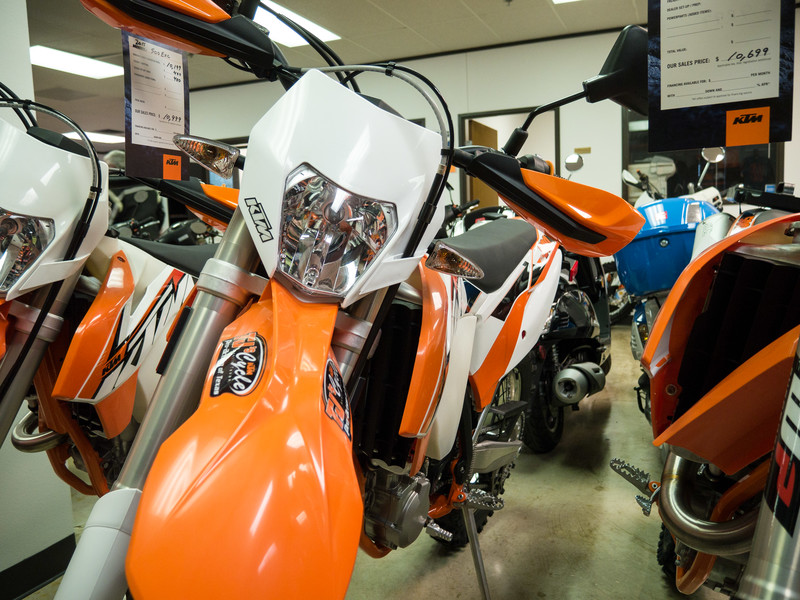 Wow, look at that! Vinny's schedule kept him from riding with us today but he was able to drop by to say hello riding this beauty. 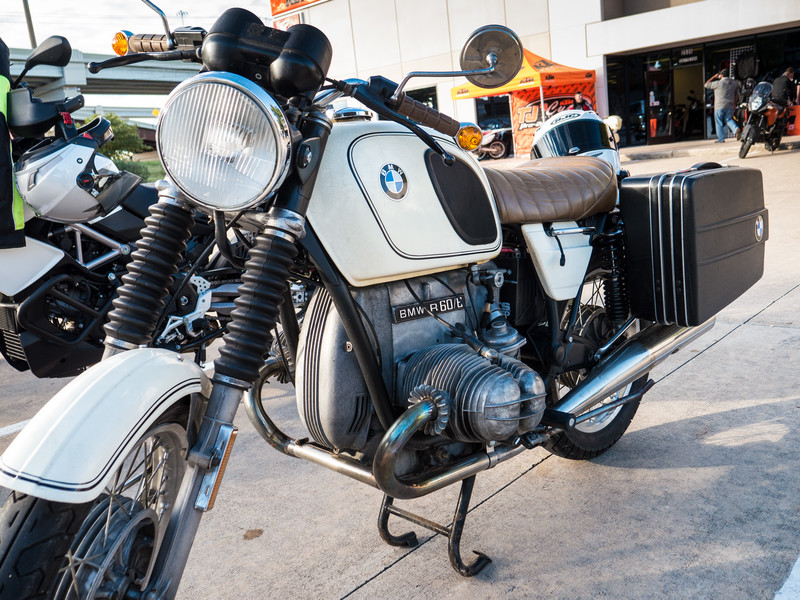 About 40 riders showed up to ride - a very big turnout - and the weather was nearly perfect. After a short riders meeting we broke up into small groups and headed west for some BBQ at Cooper's in Llano.
Last edited: Nov 8, 2014

The ride to Llano was all pavement but included some of the twistiest roads I knew between here and there. After a spirited ride on Lime Creek Road, we enjoyed 1431 and Cow Creek Road. If you haven't ridden it lately, Cow Creek is still great fun but it is all paved now - the county finally got around to paving the northern section.

We stretched our legs during a short break in Burnet (it's pronounced Burnet, Durnit. Learn it.) 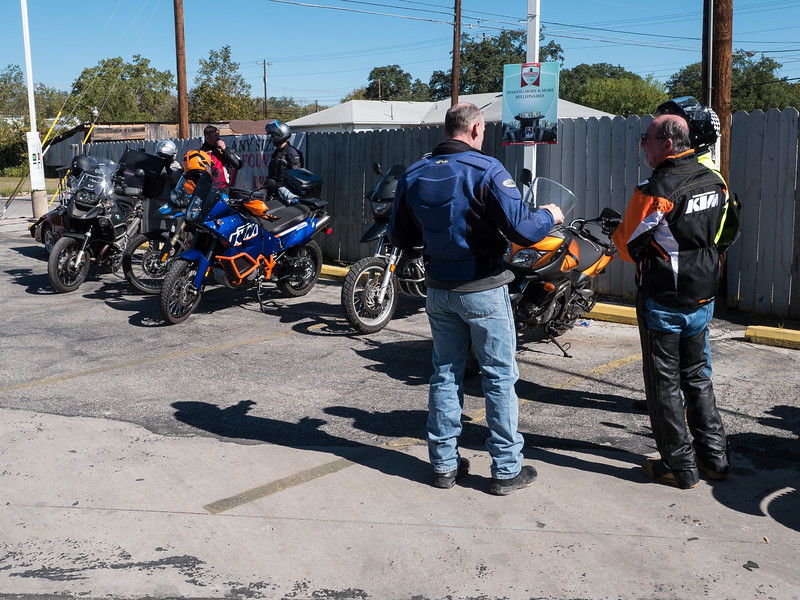 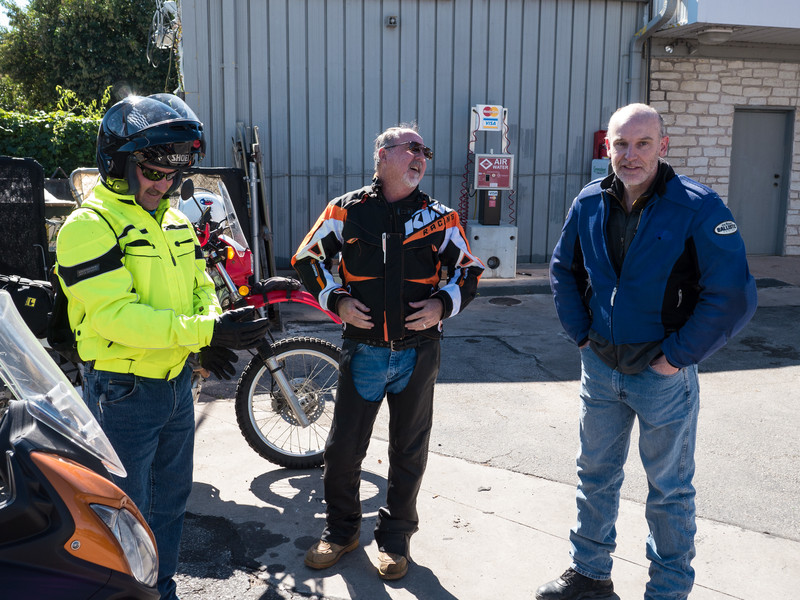 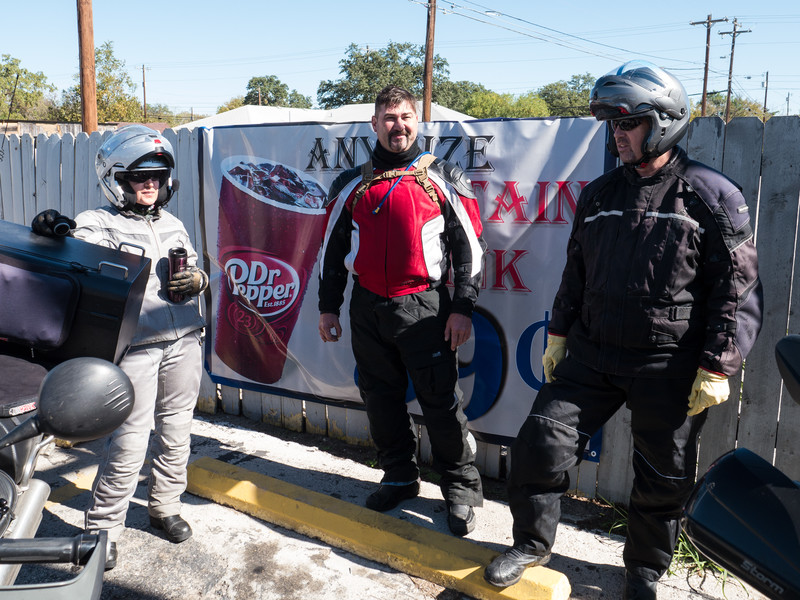 After lunch we rode some of the fun dirt roads south of Llano, including Click Road. Sandy Creek was completely dry, so no water photos. I did grab a few shots during our breaks though. 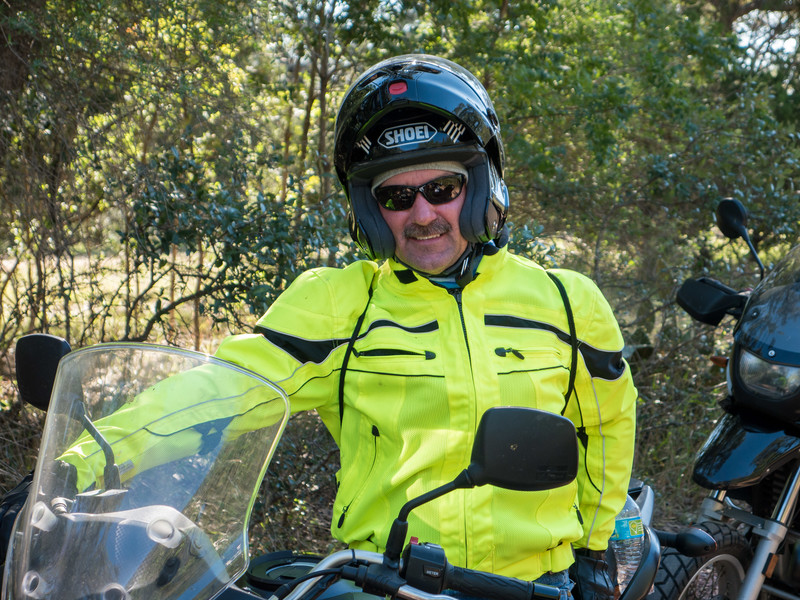 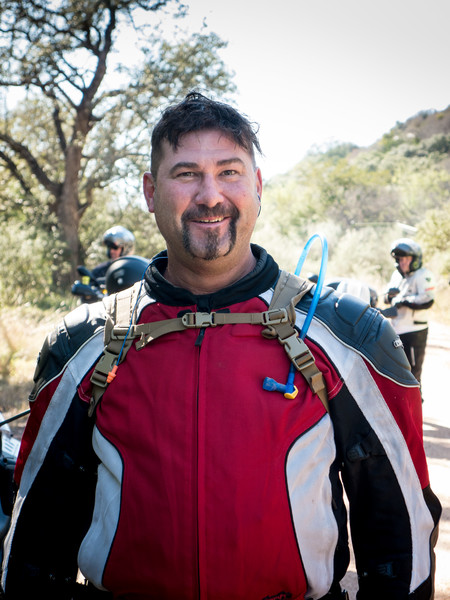 I was stunned when I saw this bumper sticker. Luckily, it soon passed 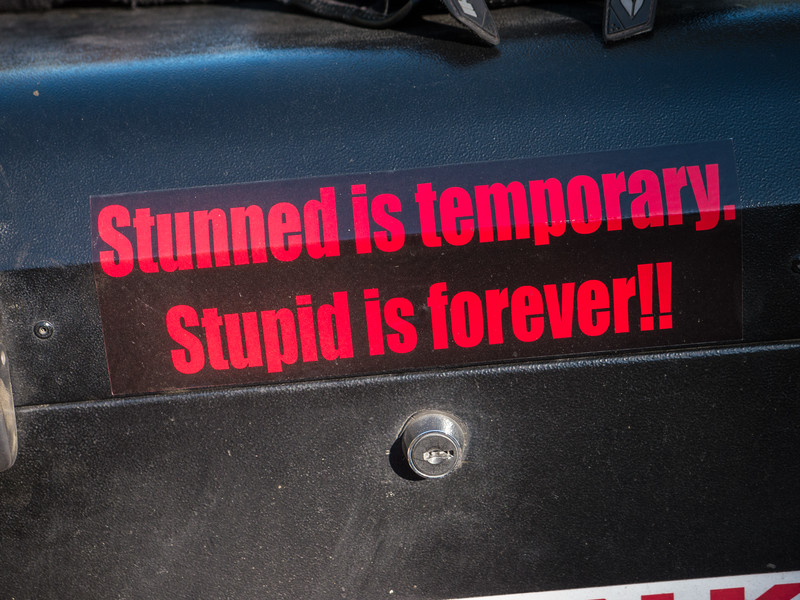 Anthony traded in his old KLR for an 800GS. What a great looking motorcycle. 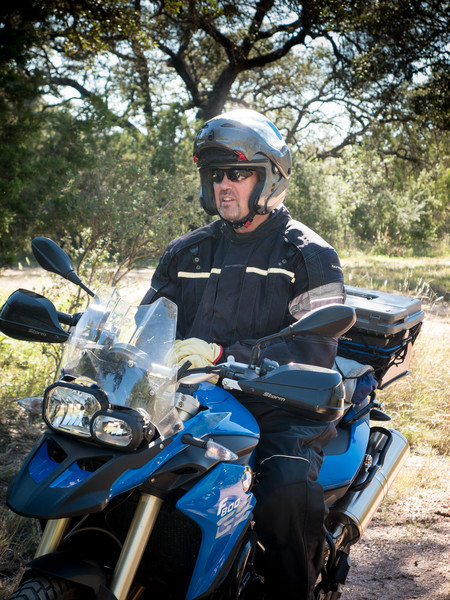 Rick M giving us the "Rick M Seal of Approval". 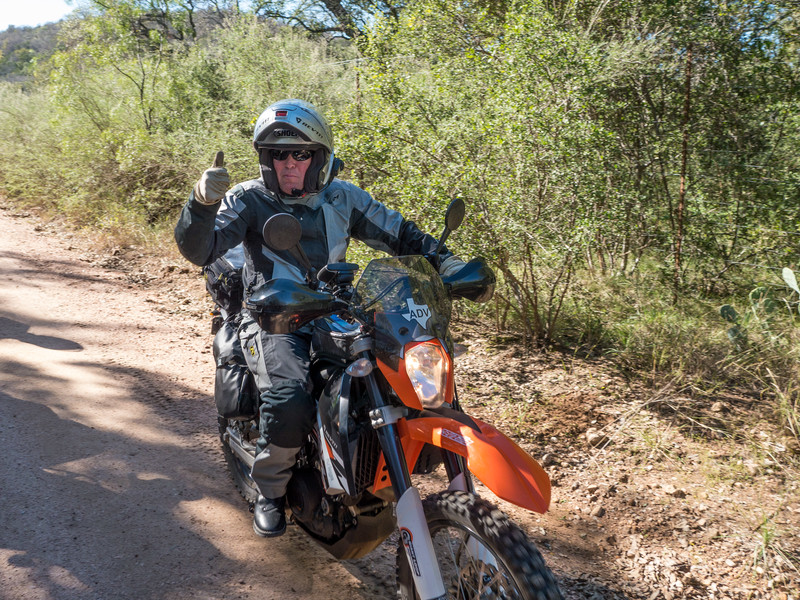 This is Danny and it was his first dual sport ride. He recently retired from professional motorcycle racing, bought a 800GS, and is ready for the next chapter in his motorcycling life. Welcome to the Asylum Danny. 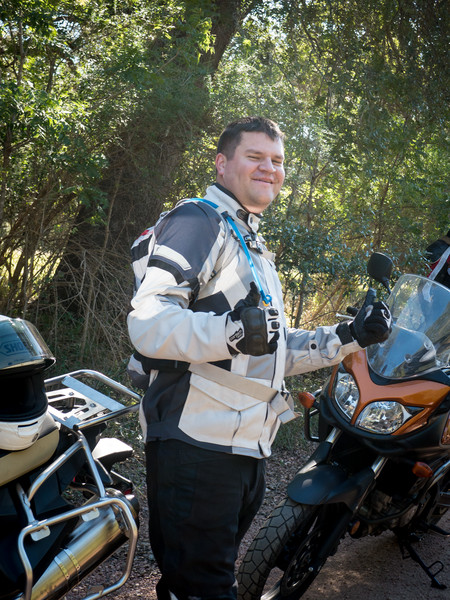 My photos from today are here. Feel free to download, share, print any/all that you want.
Last edited: Nov 8, 2014

Location
Hangin' out at the "bars"

After a slippery start, having decided to air the crankcase after last night's oil change, I arrived at TJ's bright and early, only to have my well-lubricated motorcycle pointed out to me as I parked. I had neglected to reinstall the filler plug.

Fortunately TJ's saved the ride for me. Larry, my favorite parts guy, is back at TJ's after some time at the Suzuki shop in Bastrop. Though no filler caps with the right threads were available, he improvised with a rubber bumper that new bikes ship with on the lever ends. Went right in and sealed like it was meant to be there from the get-go.

Next, a mechanic looked at it and said he could help. With a little Simple Green some power washing and a quick rinse of he caliper and pads with brake cleaner I was back in the game.

Sight glass showed what looked like a tablespoon was gone. Just like the Crisco commercial of yesteryear. It is amazing how much stuff a little oil can cover.

It was 9:20 when we finished and I just figured everyone had gone already. I didn't even drive back around front, just rolled out following the gpx route Richard sent.

The route was a lot of fun. Many roads new to me and lots of them twisty.

I arrived at Coopers and there were only a few bikes there. After meeting a few riders and getting some grub and a seat everyone else started rolling in.

Hooked up with JT and SodaPop for the ride back and got ambushed in a couple of places by paparazzi (MudClod) at river crossings. It was good riding back with friends and the few others in our group whose names I didn't get. I don't think I took my helmet off between Coopers and home.

Great ride save thanks to the fine folks at TJ's! Kudos

Great ride, and thanks to TrailBoss for calling it.

Thanks to Richard for the route and TJ'S Cycle for all they did.
We had a great day!
Rick M
Kelton M
Clark and Big A

Thanks Richard, my first ride in the area and it was a good one. Excellent route. Thanks to TJ's for having us. And excellent weather.

Wow, I wish my dog would do this! I miss him on my trips, we're best buddies, lol!

I had a blast! Where did all the rain we just had go? Nary a mud puddle. It really brings to light how far we have to go to get out of this drought.

Llano River with JT and the Wild Bunch. 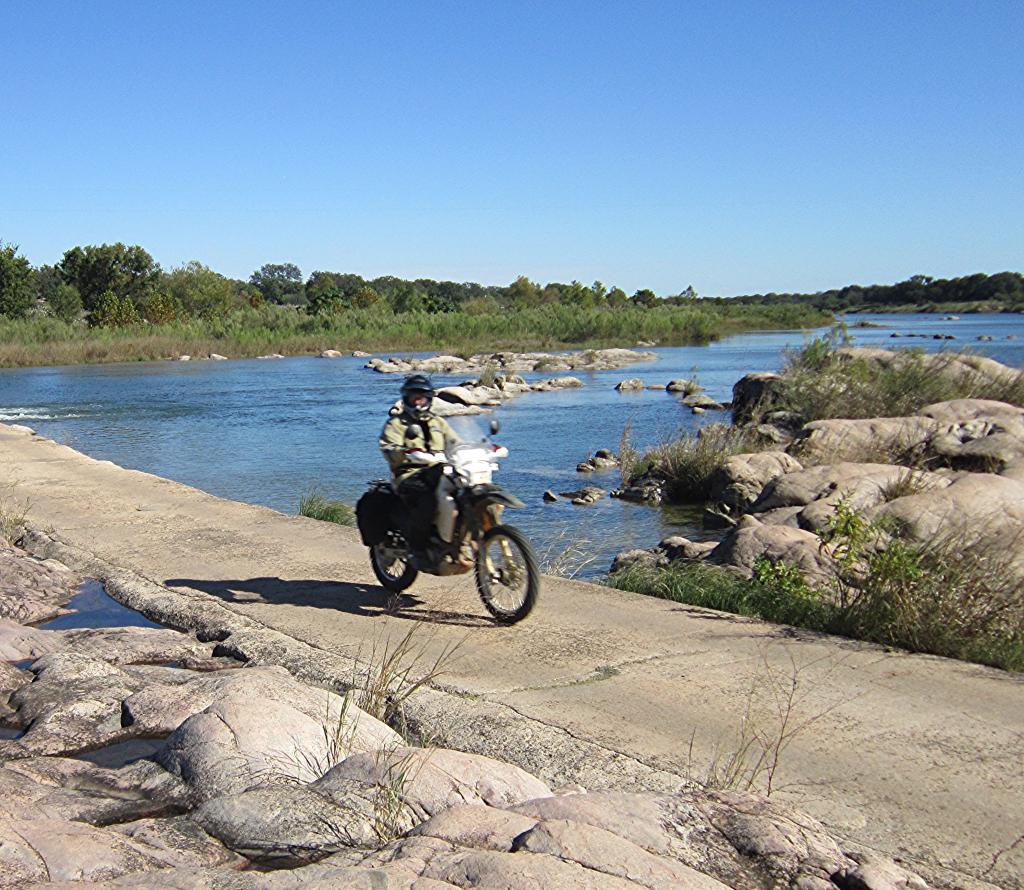 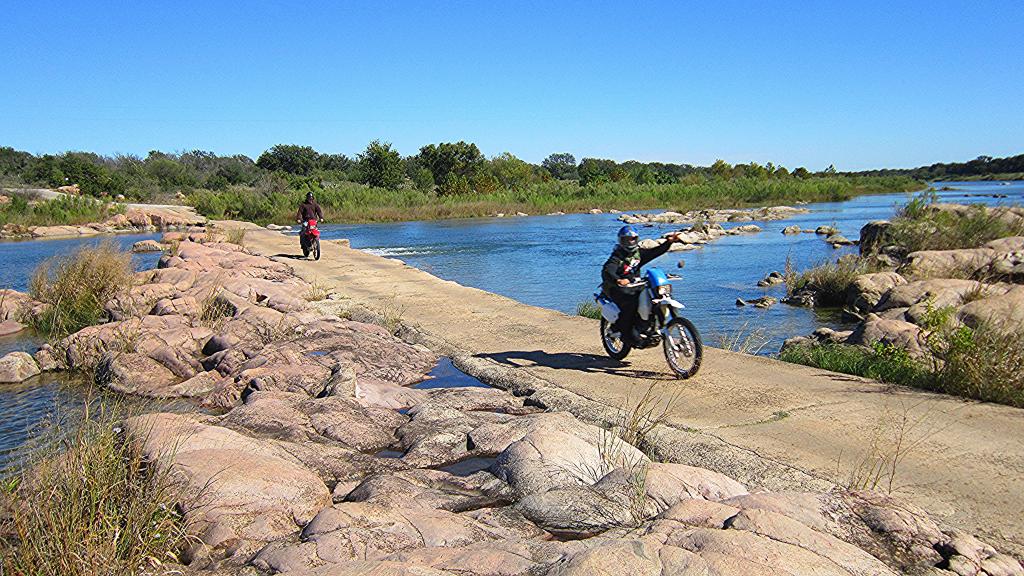 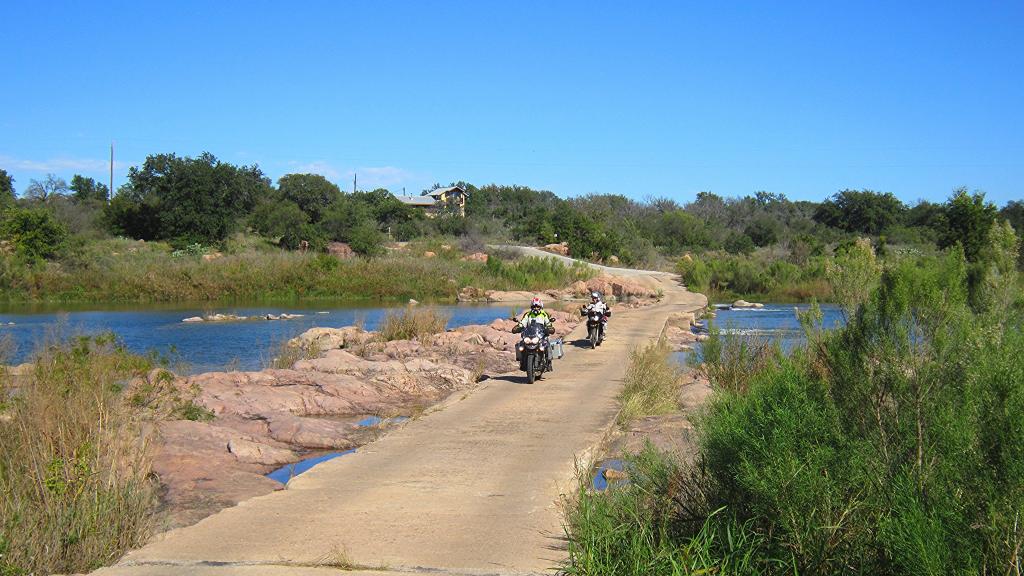 At least the dust was minimal. The graded gravel was primo! 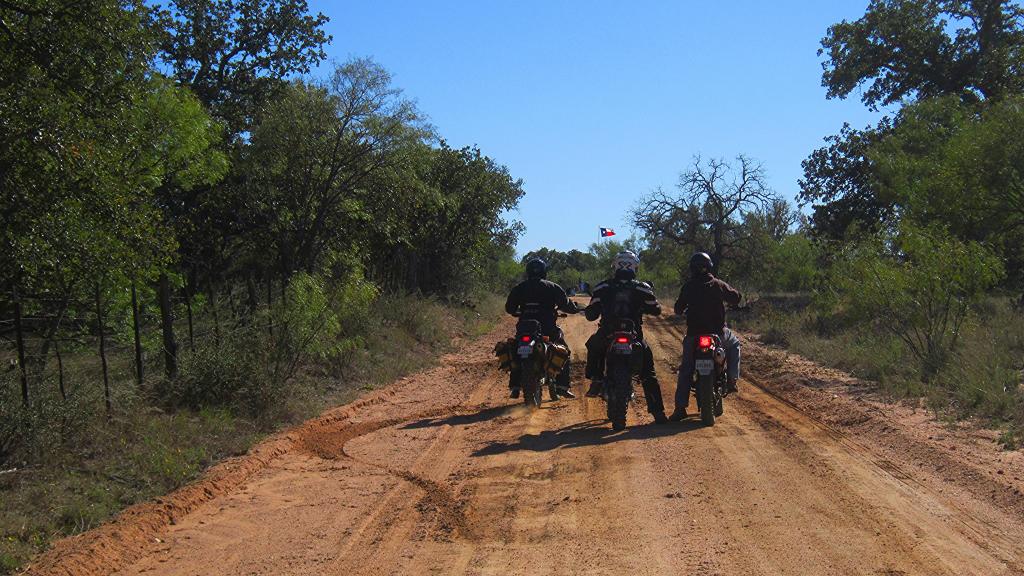 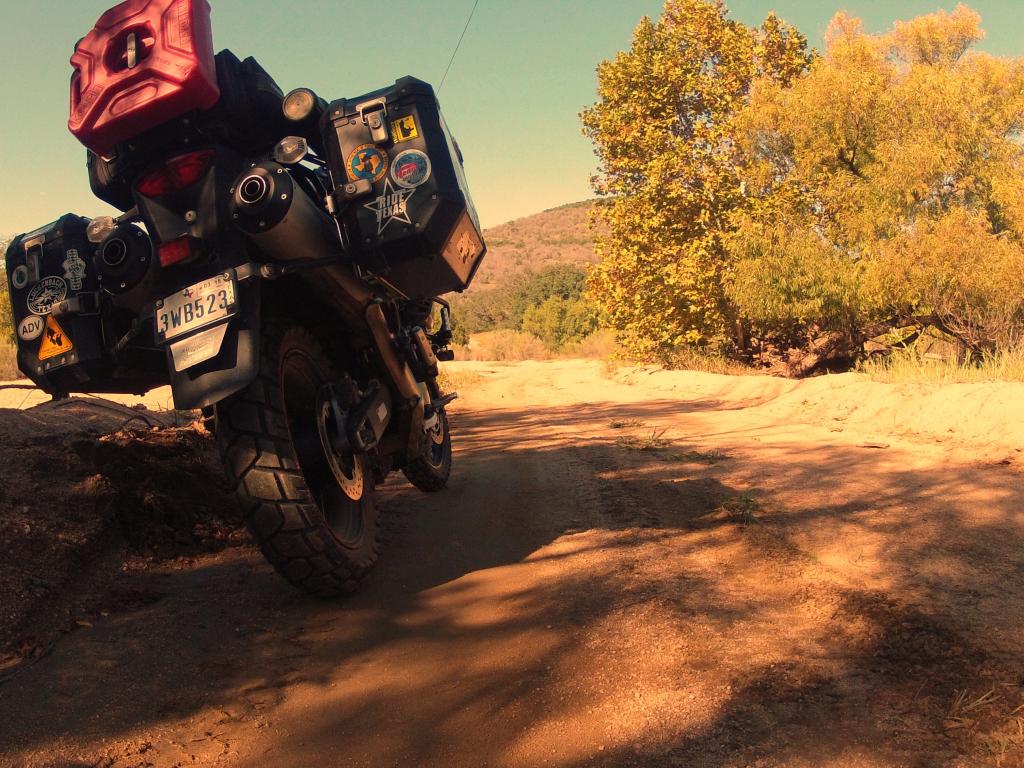 Take a break near Oxford. 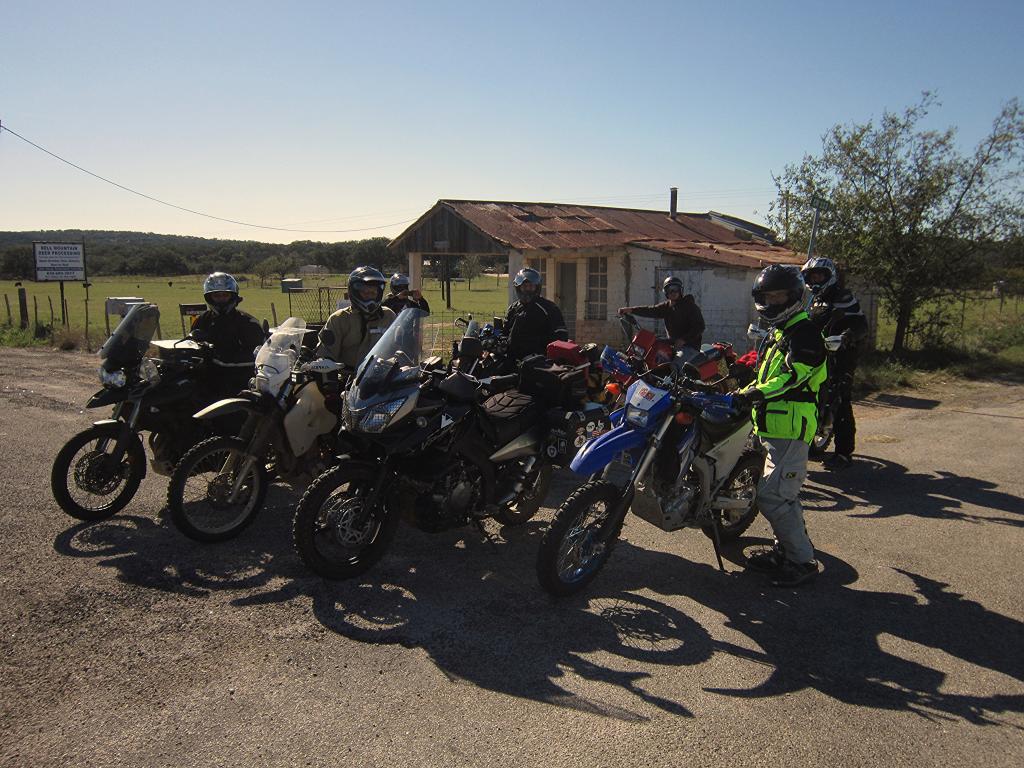 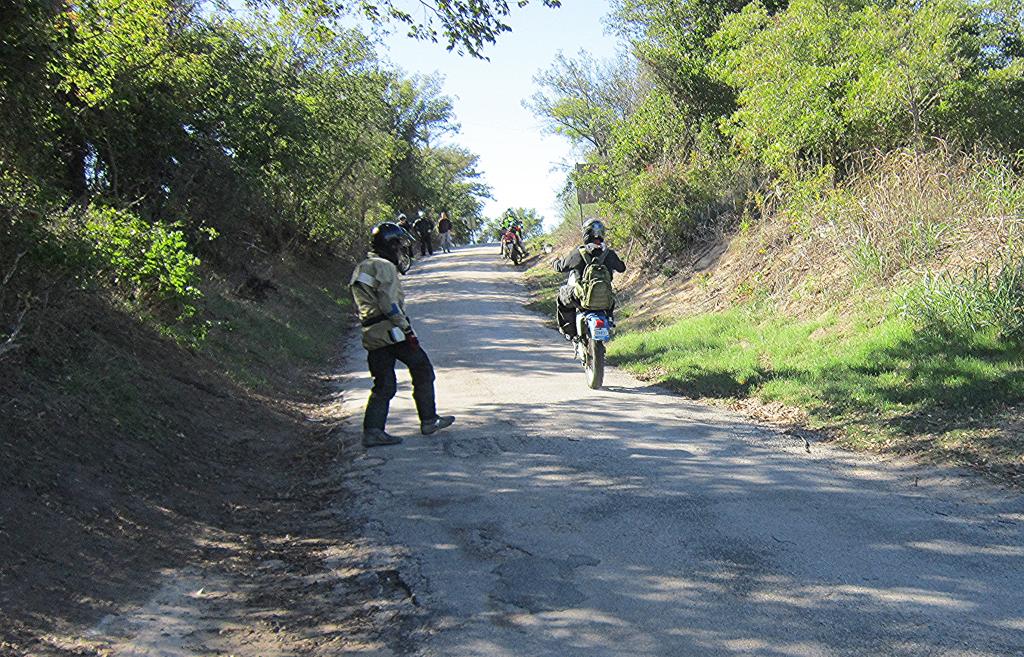 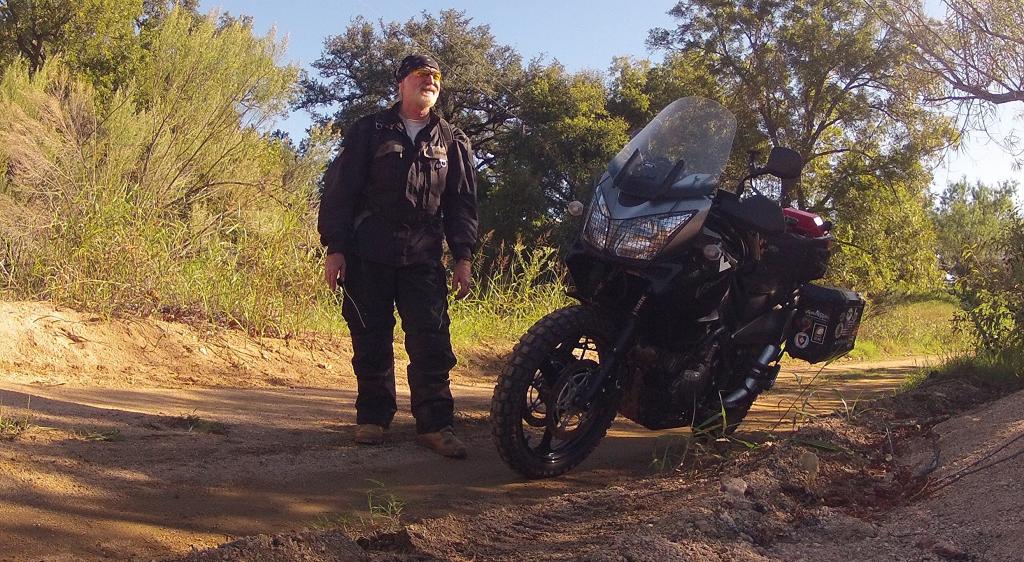 Thanks for the effort Trail boss! 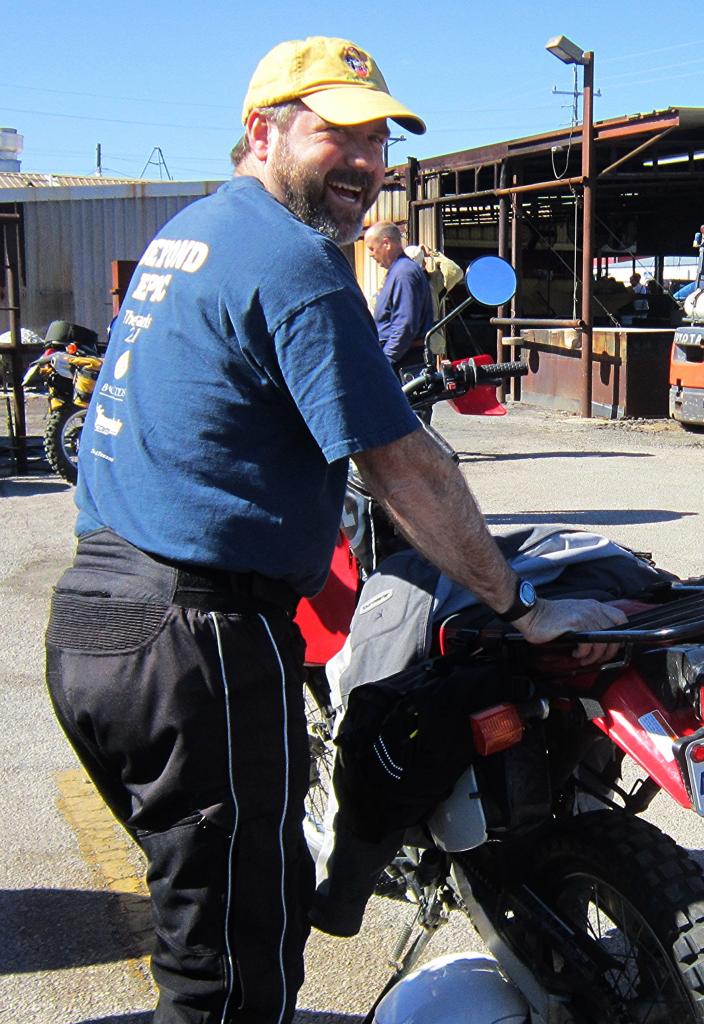 I was in the Hill Country this weekend, but not with a bike... I was DEFINITELY thinking about you guys though! The weather was superb! I still had a great time with the family, but dang... I was REALLY wishing I had a bike with me

I'm a bit jealous. I showed up for the pre-ride social and rider's meeting, but then headed off for other chores. Was really wishing I could have spent the day out with you all.

Once again, Richard's efforts have yielded us a most enjoyable day of riding through the Hill country. Thank you very much Richard.

I had the pleasure of riding 'sweeper' for the group of riders lead by Richard. Normally riding sweeper means resigning one's self to a rather sedate pace and eating lots of dust, and that suited me just fine on this ride because the new F800GS and I were still getting to know each other.

The back-marker in our group riding just ahead of me was a couple, riding two-up, on a big boxer-GS, towing a trailer. Perched on top of the trailer was their puppy (named Lacy I think). 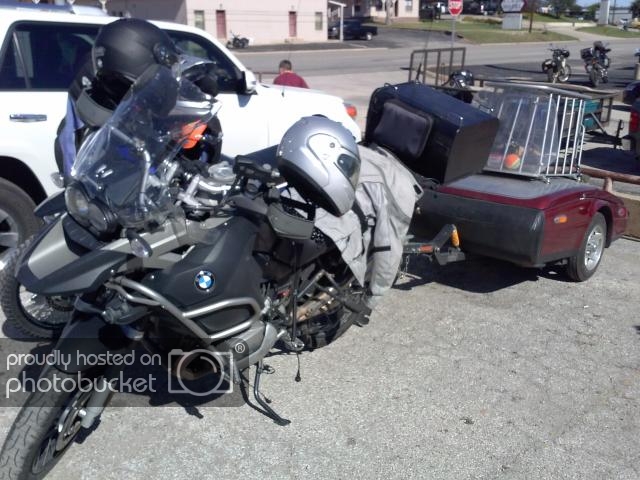 It seemed likely that this was going to be long day. I mean, how can this rig possibly keep up with a bunch crazed two-wheeled-Texans all hopped-up on Coopers BBQ?! Well... pretty darn well actually. I have nothing but respect for the pilot of that big trailer-towing GS.

The trailer presented some interesting challenges on the rutted unpaved roads in Llano county. We all know what it's like to feel our bike wiggle around a little as the front and rear tires tussle over which rut to follow. But add two more wheels on a trailer, which don't fit in the established ruts, and you have the trailer pulling the back of the Big GS from side to side as the wheels hunt and sway left and right on the edges of the main tire rut. Conversely if the big GS wiggled a little, the trailer amplified that lateral movement. It looked a little busy from where I was but the rider said it was no big deal. Again a very skillful rider at the helm of the big GS, not to mention a trusting passenger riding pillion.

The trailer did an excellent job of dampening bounce and roll giving the puppy a reasonably stable ride despite the twists and turns and bumps. 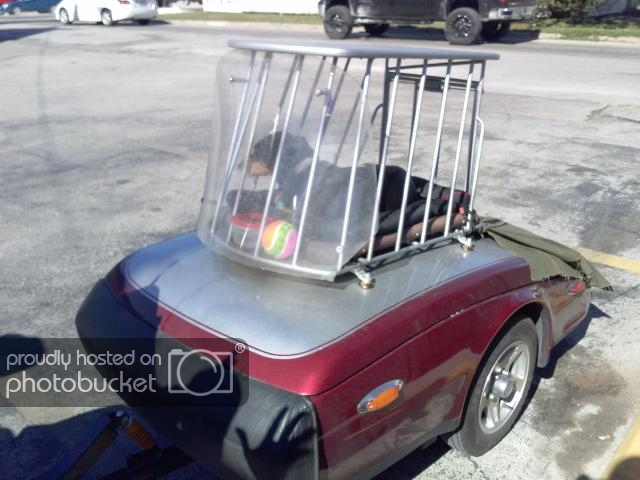 The puppy did her part too. She'd make a fine side-car monkey, they way she was leaning out of the sides of her enclosure. She had no trouble maintaining her balance using the ingeniously designed tubular enclosure. She'd fit her head through the bars, and braced her shoulders against the bars, while her feet braced against the bolsters in the padding in the bottom of the enclosure. It was really entertaining to watch Lacy so thoroughly enjoy the ride. All the sights and smells must have puppy-nirvana. 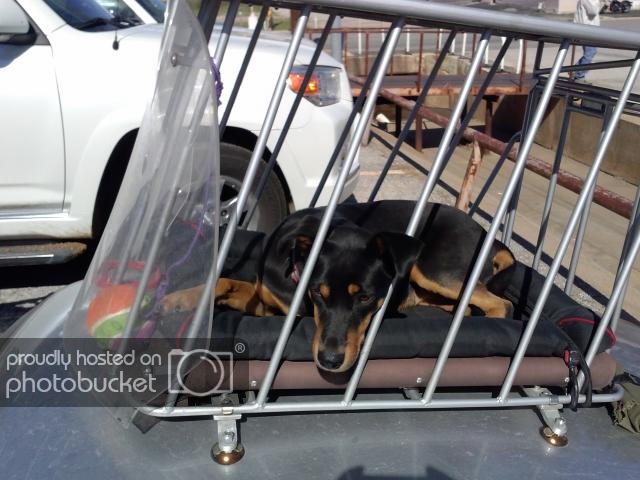