I thought I would post my certificate. The Silver is different from all other Mile Eater awards in that it has to be accomplished within one year. All others can be earned over a number of years.
I have one more Bun Burner Gold waiting certification. I also have another Saddlesore 1000 to submit. Unfortunately, it’s all I’ll have to show for my long awaited 50CC ride.
My doctors tell me my cancer has returned with a vengeance and that was the cause for the crippling pain that caused me to give up the 50CC. I’m pretty sure my Iron Butt days are done, but not all riding. After making it back from Gila Bend, Az. and being told I was not risking additional injuries, I took a nice sedate 1750 mile ride over 3 and half days. I’m planning on at least starting the 4 day Heart of Texas Rally next month. I hope to make it to the finish and the party. Those rally riders have hilarious stories. 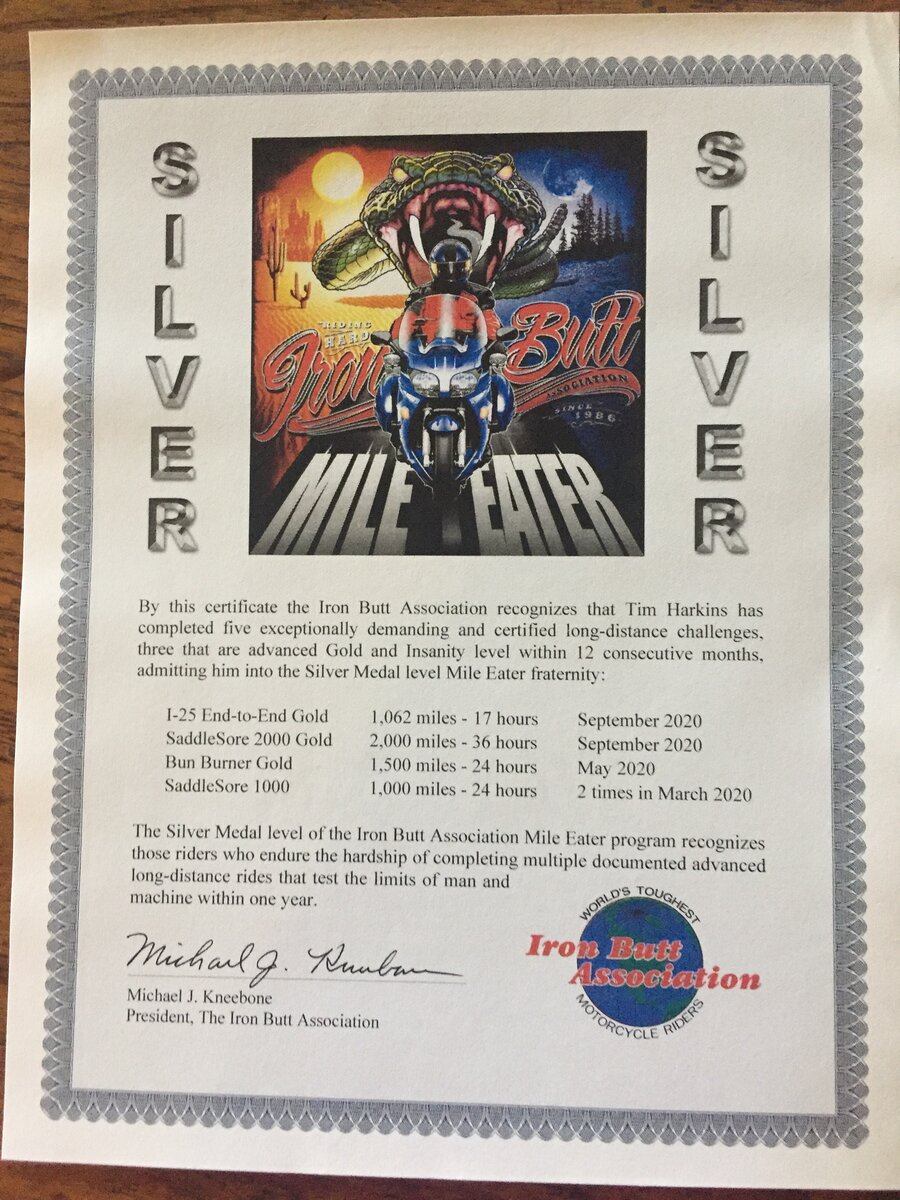 Giddy Up Boys and Girls!

OUTSTANDING!!
Congrats on an amazing accomplishment.

Really, really like all but one part of that, and I don't think I need to say which part.

Congratulations on the major award Splash. Including you in our prayers for a quick and successful healing.

Congratulations Tim on the award. You are in my prayers for healing so you can keep riding and be a blessing and encouragement to all that know you.

Congrats on the award, I don't know if I'll ever get there. Ignore my statement on the TOH thread as now I understand the reason for cutting the ride short. All my best to you for better future results.

What an awesome riding pedigree, I really admire you!

Thanks everybody. The fact is, I’ve already made it 14 months beyond my original expiration date they gave me. I told my doctors last week during my visit to MD Anderson, I am still volunteering to be the first person to beat this unbeatable cancer. Somebody will be the first, always has been. The first woman to beat breast cancer, the fist to conquer leukemia, the first to step on our moon. I’ve given this a lot of thought, there’s one person I’d love to meet. Imagine years ago, someone was walking down a rocky shoreline, spied what appeared to be an interesting rock. On closer inspection they realized this “rock” had a symmetrical crack, they pried it open, there the first raw oyster. They studied it closely and came to the conclusion it would be good to eat! That’s the pioneer I want to meet.

You're an inspiration on and off the bike.

Congratulations for your accomplishment and prayers for your future.

Congrats. I enjoy reading your ride reports, and has gotten me interested in some long distance riding.
Hoping to do my first SS1000 in the next few months.

blupupher said:
Hoping to do my first SS1000 in the next few months.
Click to expand...

I didn’t know where else to post this, thought I would add it this thread. I mentioned I up top I was going to try to get the Heart of Texas Rally done. I did. You might remember last October I rode my first rally. It was the 30 hour version of the Heart of Texas. I did SO well, that’s a lie, I decided to try the 4 day version.

There were 74 riders, including a slew of IBR successful riders. The weather was atrocious, rain, rain and more rain. Big thunderstorms. I believe there were 2 bikes totaled by a hail storm in DeHanis, west of San Antonio. Both riders were able to take shelter. I know I ran all day Thursday and Friday in some sort of rain.

Lots of bikes went down in low speed drops, muddy roads being the major contributing factor. I personally went down 3 times on Godzilla. One was a low speed intentional lay down to avoid a cager who disregarded a stop sign. That went well until the wing caught something and decided to switch from a low to high side. The second spill occurred a couple of hours later in Bastrop. Lots of road construction, lots of mud on the roads from said construction. Enough said. The third occurred the next day in Zephyr Tx. I needed to turn off 183 into a nice gravel and mud church parking lot. What could go wrong? A 1000 pound goldwing and more mud? I didn’t make it into the lot. It was pouring and the approach was probably 8 or 10 feet wide of runoff. Shouldn’t been an issue. What I couldn’t see was a baby Grand Canyon lurking in the muddy water. Turns out , when the front wheel drops into an abyss abruptly stopping forward momentum and causing the rear end to lift and turn 90 degrees it’s impossible for me to stay mounted. I did get the bonus.

I was running behind schedule now forcing me to ride in torrential rain to Tow, Tx. It was now 10:30PM Friday. I really needed to get back east of I35. The rain was so heavy I was probably only able to run 30-35 mph, struggling to see the edge of the roads. My phone rings, it’s my riding buddy Porcupine from San Antonio. He’s been watching my spotwalla. He suggested I take a look at my weather radar screen. I’m so fortunate he was watching. I came into Burnet from the west on 29 and ducked into the first motel I saw. I believe it was the La Vista. Turns out most of the rooms come with a carport, a very lucky thing. I pulled Godzilla in, got off, the big storm hit. The wind was so strong I had to lean against my bike to prevent it from getting blown over. I was able to get a ratchet strap and tie my bike to a post.

Saturday started early, still raining. It’s the final day. I have to pick up 3 additional bonii to complete a 13,000 point combo. I depart Burnet about 06:00 headed to New Sweden. From there I need the world’s smallest Catholic Church at Round Top. The rain finally ends about Giddings. That bonus collected, I’m off to Anderson,Tx. For my final bonus. Done. Now back to College Station and finish. I’m in with about 2.5 hours to spare.

So how did this 69 year old man do? Oh wait, I started the rally as a 68 year old and finished a year older, lol.

As stated before, 74 intrepid riders left the start line. I believe Paul said 3 withdrew and went home, 71 left. Two lost their bikes to a historic hail storm, 69 left. Which happened to be my Rally number. Of the remaining 69, 43 riders scored enough points to be considered finishers.

I came in 28th. I was told had I not missed 1 meal bonus I would have been 19th. The funny thing about that is I’ve never been accused of missing a meal.

As a side note, Godzilla came through it like the monster it is, no damage other than every crash bar wears their tattoos proudly. 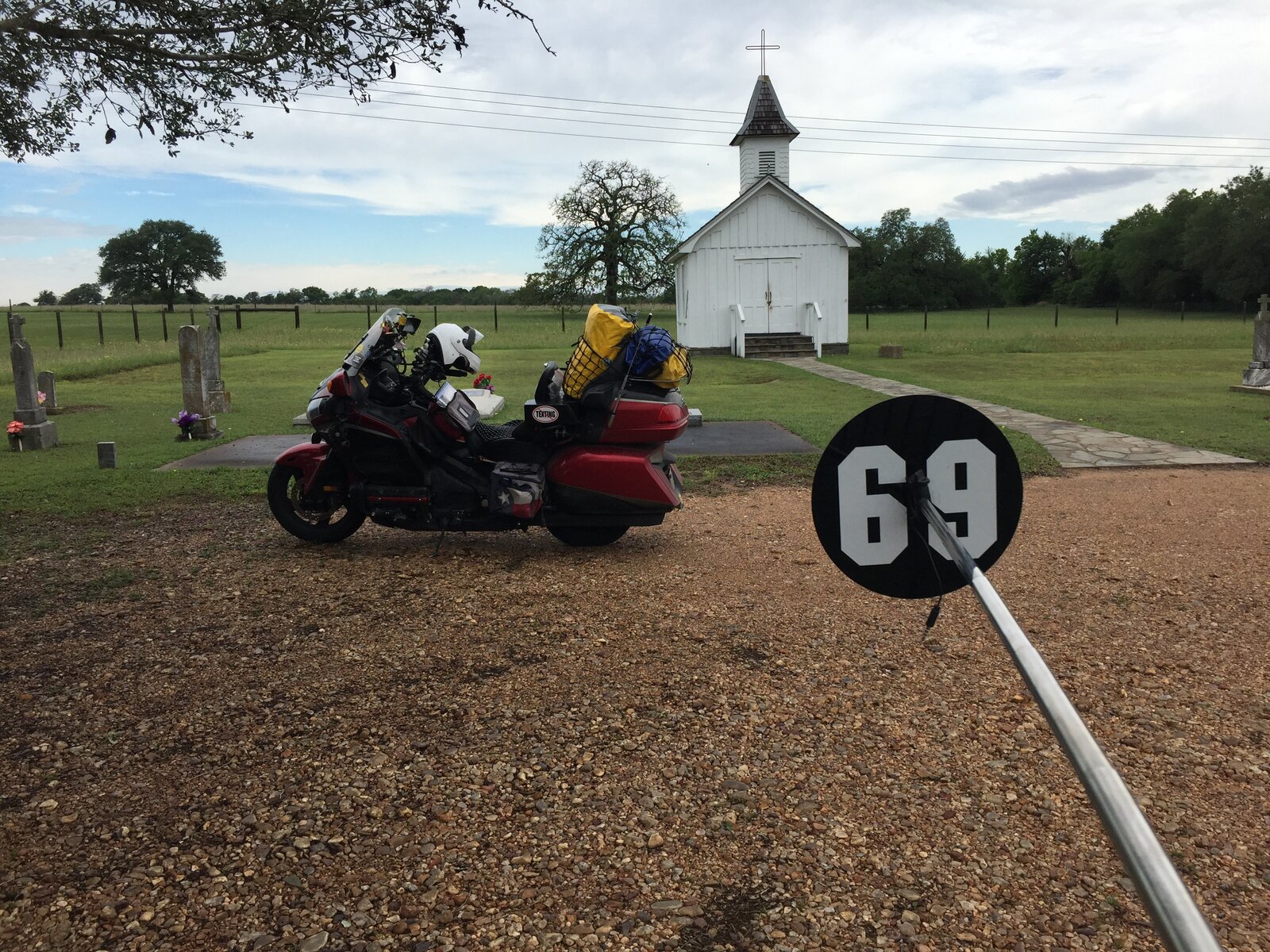 "The third occurred the next day in Zephyr Tx."

I'm guessing that was the Baptist Church.

I don’t remember. But it’s right on the north or east side of 183 in town. It’s parking lot was a mess.

Wow. What a mess.
But quite a story to tell.
Not sure if it's 'congrats' or 'commiserations'

blupupher said:
Congrats. I enjoy reading your ride reports, and has gotten me interested in some long distance riding.
Hoping to do my first SS1000 in the next few months.
Click to expand...

@blupupher
Where are you in terms of your ride planning / execution? Anything we can do to help?

Splash said:
There were 74 riders, including a slew of IBR successful riders. The weather was atrocious, rain, rain and more rain. Big thunderstorms. I believe there were 2 bikes totaled by a hail storm in DeHanis,
Click to expand...

You can thank Kenneth Andrews for that; he's not referred to as "Rainman" for nothing. He did something to tick off Mother Nature at some point because she really tosses a lot of stuff at him. He lost both mirrors and his bike's GPS to the hail storm but he's recovered enough to be able to ride in the IBR in two weeks. People around the country watch his location to make sure he's not in their area if they are planning a big ride.

Congrats for being a finisher and being pretty high up in the ranks too. I completely understand and sympathize with the 19th to 28th drop. I was 3 minutes late at the Park n Ride Rally in So Cal back around 2012 and dropped from 13th to 33rd. And it was only 3 minutes because I was lane splitting for about the last 20 miles of stop and go traffic.

Brian, I saw his bike Sunday, not only did he have the damage you stated, but seat was cut open in 2 places and his tail light was broke. We figure from a hail stone bouncing up.

The small church was a bonus in the Butt Lite 2 , I suggested it to Eddie when he mentioned a religious combo for the rally.
P

Congrats Tim on the IBA Silver cert and the really nice finish in the HoT! Impressive improvement over last year!