Kid Safe Area around Dalls/Ft. Worth

My kids are just getting into riding and are doing quite well so far. However, they are getting bored of riding the same sandy track at Trophy Club Motorcycle Park.

Are there any other kid friendly areas to ride nearby...preferably on the West side of town? We live in Grapevine. I've been told by another dad that River Valley was good, but I'm not sure since it is Motocross centric. I've seen Rocky Ridge and Bridgeport listed as riding areas, but research has been scarce. What I have seen tells me to stay away because of wild, aggressive quad riders.

Oh yea, very important fact I left out. I don't have a bike so I can't go out to the trails with them so they have to ride nearby where I can watch them.

How old are they? Any thoughts about getting each one a SPOT tracker and letting them go ride, or are they too young for that?

The Red River trails are supposed to be worth the trip.

Oldest one just turned 10 last week, youngest is 8. I'm not too comfortable letting them ride that far out of site. Not to mention they only have around 8 hours of riding experience.

Red River is definitely on the the "to-do" list when I get a bike. Camping will be involved on those trips.

Rocky Ridge used to have have a few open areas near the parking areas where kids can ride around. But I don't think that they have a dedicated area like Trophy Club.

Village Creek MX has a few miles of trail, plus a kids only MX track. That might also be an option until you get your bike.

I would advise against Red River until you have a bike. That is the type of place that can get really dangerous, really fast if you aren't careful. If you stay somewhat around the camping areas, then you run the risk of getting ran over by quad-billies. And if you get out far enough to escape that, the terrain can get pretty difficult without warning.

With your location, Trophy Club is your best option. I have two as well 11/8 and Rocky Ridge over challenged them unless we stuck to riding the main "road", but you would need a ride to go with them for that. They had fun in the "gravel pit" area and one other small play area. However TC offers more rider friendly and parent friendly location for the kids just starting. We spent 2 hours out at TC this past weekend and they couldn't get enough. My kids are social so everytime a need kid came in the ride area, it was someone new to ride the trails with, lol! Red River - Bulcher as others have said would be a bit much. We did go to Red River ATV Park - north of Bonham in Oklahoma, kids had fun there on the trails but we had to stay clear of the heavy sand areas as their quads would bog down but the trails were aplenty. Draw back was the travel time to get there, a tad far with TC just down the street so to speak. Enjoy!

Try Just for Kids west of Jacksboro - I think it's still open. Took the kids there a few years ago and totally safe and fun. an mx and enduro track.

Nice timely post. My son will get his bike from it's hiding spot in the garage sometime in the next week. We'll probably be off to Trophy Club as soon as possible to get him started. We'll be interested in other riding.

One other thing Bill didn't say is that Red River is BIG. If you don't know your way around or have someone with you who does, it's easy to get lost out there.

Just as an FYI, "Just for Kids" closed their doors around 4 years ago.

Trophy Club is the best spot to get kids riding for the first time. However, it's been closed most of the time this past year. I'm not sure where the lake level (Grapevine Lake) needs to be, but when it's up, the park is closed.

They also close it quite often because of rain.

As an alternative, I have taken them to River Valley MX. They have a killer kids only track. http://rivervalleymotocross.com/

Thanks leadwolf. Looks like River Valley needs to fix their server, 503 errors.

Just got back from vacation and we have birthday parties and I'm headed out of town, so maybe in a few weeks TC will be open again. Or we might get more rain. 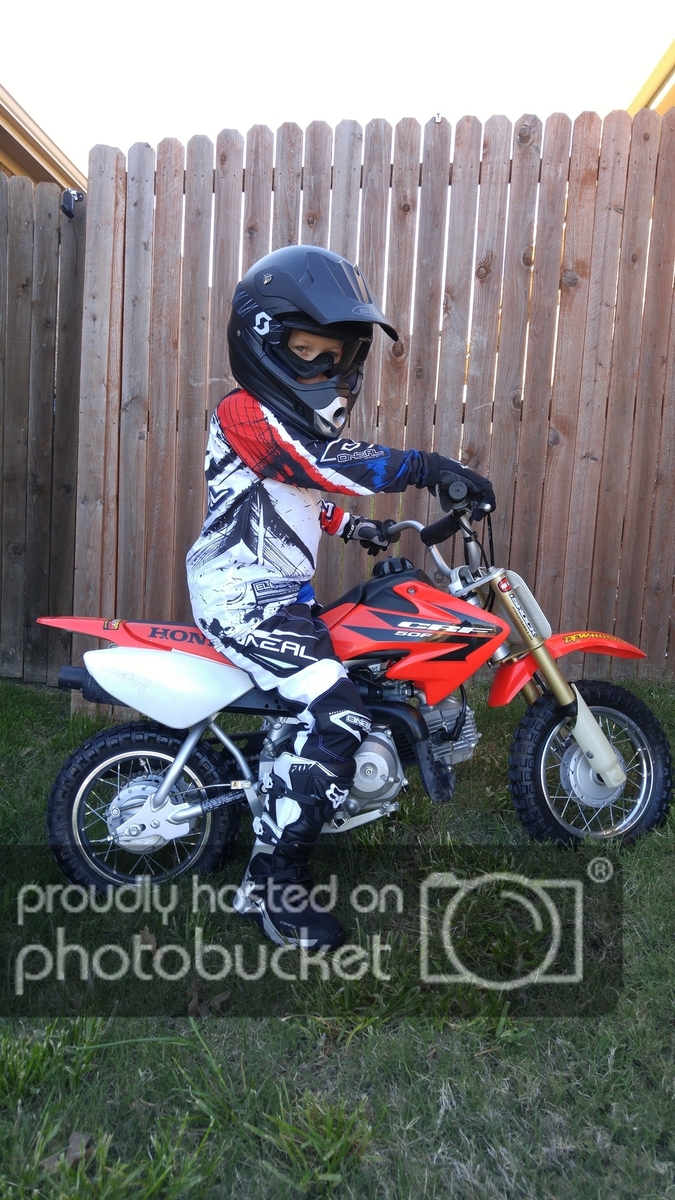 On a side note, call before you haul. As of last check of their website, the OHV area is still closed off. And one more thing to note, do NOT speed through Trophy Club, not even 5mph over. Don't ask me how I know this.

Good to know on all counts.

Really, I just need a field to let him putz around in that is mostly free of obstacles. Got lots of fields around here but ever since some idiots decided to tear up the new construction areas on their dirt bikes, the police are cracking down hard on that activity.

Kiddo is asking to go camping too. SHNF isn't all THAT far. I've never been, any input on if I could find what we are looking for down there? I won't be riding so just need a decent practice area I can work with him at. He's chomping at the bit to get out and ride his motorcycle.

I wanna be your kid

Honestly for the first little while, you might be just as well off by taking him to Village Creek during their practice days. They have some trails, but also just lots of open areas to ride around on. Not to mention the kid's track where I'd bet good money that he would be within one or two days of riding.

Next to that, possibly Rocky Ridge if Trophy Club doesn't open up. They are small'ish, and again have some generally open areas to put around in.

Red River is BIG and the open areas to ride around in are often times crawling with quad-billies that you have no idea how drunk or not they might be. I love going to that place to ride, but I get to the far reaches of the property as soon as I can when I am riding up there.

You are east of the metroplex by a bit, so that puts you closer to Barnwell than most of us. I've never been out there yet so I don't know what open areas they have for a beginner, but it might be worth investigating. I do know they have been known to have some very, very difficult trails so I would suggest getting any info ahead of time so he doesn't end up where he shouldn't be.

Lake Grapevine is still 8 feet above full level, and dropping but not fast enough, so looks like TC will be closed for a while longer.

The folks at Barnwell say that I should be able to find what I'm looking for out there. I dropped by "North Texas British" this week to pick up n OHV sticker for son's bike as it's near my work. Cool little place that services Land Rovers only. From what I hear of Land Rovers, and looking at his parking lot, he has a lot of business. I chit chatted with the nice chap who sold me the sticker and he asked me where we were going to ride this weekend and I told him Barnwell Mountain. He replied "See you there!" They will be out for scouting and cleanup for an event going on later in the month.

Sadly though, we will not be there. School called yesterday for me to pick kiddo up with a fever, so he's on the mend and disappointed this weekend. Maybe next weekend we can get out.

Due to weather on Saturday, I locked his throttle down so he had closed, open and somewhere in between, then just took him over to his grandfather's house who has a decent size back yard. He had a freak out moment in the beginning, but then he remembered my rule "Listen to dad." He started listening and respecting the bike. Took it slow and easy and eventually he was going round the cones I'd set up and going braap braap braap around the corners having fun. Rain started just as we finished up. He's been itching to ride, now he's itching to be turned loose, but due to schedules will have to wait about three weeks. Maybe lake Grapevine will be down enough by then.

Brushy Creek Motor Farm off I30 offers plenty of space for beginners and a very mild MX track to release their inner Dungey.

Not bad at all Jasen! He is going to be ripping around in no time.

Yea, and after this past weekend, I might already have a line on his next bike.

Eisenhower Park on Lake Texoma has a nice area that is larger than Trophy Club. Cheap admission too.

I rode TrophyClub Park this morning.
The kids area is open and IDEAL for the kiddos.

The MX track was open but seemed incomplete.
I say this because it was integrated into the North loop wooded single track.
This loop was only 1.7 miles long.
Everything south of the MX track is overgrown, muddy and unimproved since the flooding.
Price increase from $8/bike of 2 yrs ago to $15/bike!!!!!!!!
I grew bored on this short north loop after 5 laps.
I did break a sweat, I/bike got pretty muddy, requiring cleanup.
Considering all that, for me, it wasn't worth the drive from HEB area.
For parents looking for a relatively flat area to supervise beginner
riders it is perfect.

Village Creek is good if you spend the entire day. $25 per bike I believe. But lots of room to ride within parental view.

cmc#3 said:
I rode TrophyClub Park this morning.
The kids area is open and IDEAL for the kiddos.

The MX track was open but seemed incomplete.
I say this because it was integrated into the North loop wooded single track.
This loop was only 1.7 miles long.
Everything south of the MX track is overgrown, muddy and unimproved since the flooding.
Price increase from $8/bike of 2 yrs ago to $15/bike!!!!!!!!
I grew bored on this short north loop after 5 laps.
I did break a sweat, I/bike got pretty muddy, requiring cleanup.
Considering all that, for me, it wasn't worth the drive from HEB area.
For parents looking for a relatively flat area to supervise beginner
riders it is perfect.

Me and kiddo went out there yesterday for the family campout and had a blast. Got up this morning and put some time in on the beginner track. Today he tried the 70. After that he wanted nothing to do with the 50 anymore, says it's "Less wiggly." It should be, those bigger wheels in the sand out there are much more stable. Me on the 50 chasing him down is downright scary. 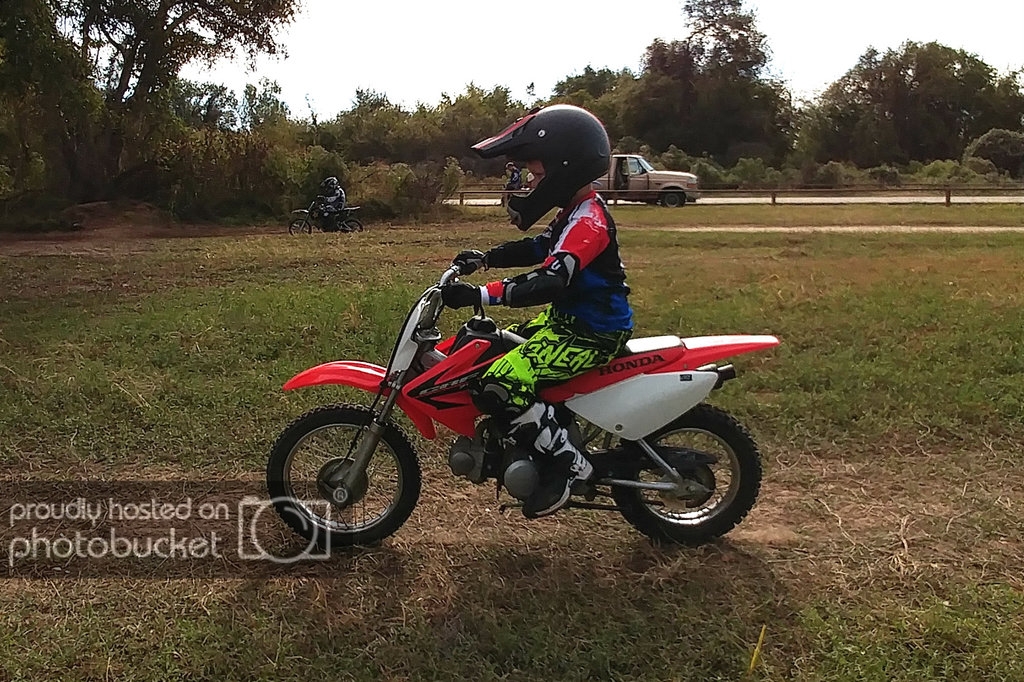