Wanting to get a quality dual sport. Currently riding a xr650L and working on a 650R and DRZ400E. Looking to move up to the KTM / Husky that's a few years old. What year to consider?? How many miles before you need to start needing top end rebuilt. Rode out at Big Bend in February and now I'm hooked. Appreciate any input
M

Check out the model specific thread on adv rider for some info from actual owners. I am selling a 2015 ktm 500exc at this time. I don’t want to come across as a salesman so I will refer you to the 2012 ktm500exc? Thread on advrider It covers 12-16 year models and the husky is very similar. There are many owners with 10,000 miles and have never done a top end. I personally think that’s a bit extreme but they are pretty much bullet proof in my opinion. I owned a 2013 and it never failed me and in the roughly 200hrs I rode it never needed anything. I checked the valves often, having been on kx450s from 06-09 I was fully prepared to have to do a top end at 50 hours cause that’s what we were used to doing. Waste of time and money. Before that I had a 2009 and a 2010 husaberg that was made by ktm before they bought out husqvarna and discontinued the husaberg. I loved the 70 deg. Engine. They were great bikes also, never had a failure but hard to work on. I always used the recommended motorex oil.
Last edited: Jul 7, 2019
M

The motor had some minor changes in '15 IIRC.
More oil capacity and better oiling overall.

EXC-W had a wider ratio transmission

Pds/no link rear suspension and open chamber forks up to 2016. I think 17 went to the explorer fork. Whatever you do read up on 4cs forks before you buy anything that has them. You will thank me later. I had a 6 days that came with the ‘improved 4cs’. These forks had issues that money could not fix in my experience. Like the rebound adjuster comes shooting out of the top of the fork while blazing through the forest and coating you and the bike with that wonderful smelling fork oil.

Oil capacity is the same .

I've got a '17 FE501, which is the 'new generation' bike. This is the year they went with the composite sub frame, which is pretty impossible to carry anything on. Consider that when you are thinking about schlepping stuff on any dual sport trip. Other than that, the bike rips. And maintenance isn't that bad. I have 110 hours on it. 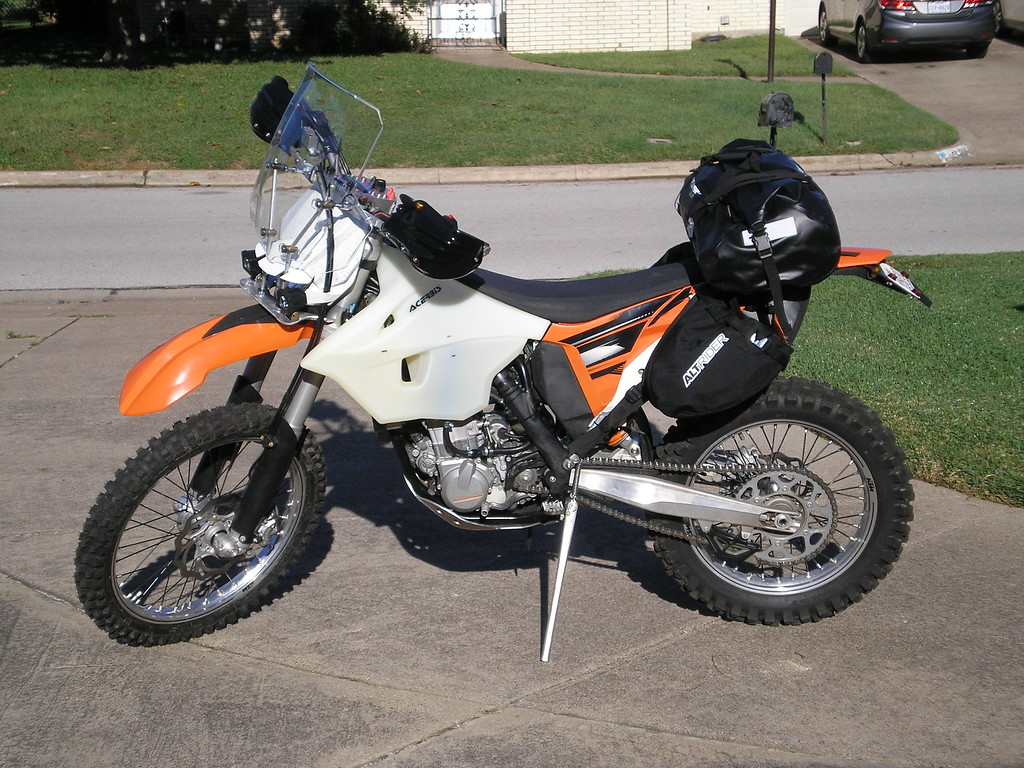 Out at Big Bend Ranch and State Park right after I bought it in 2011. 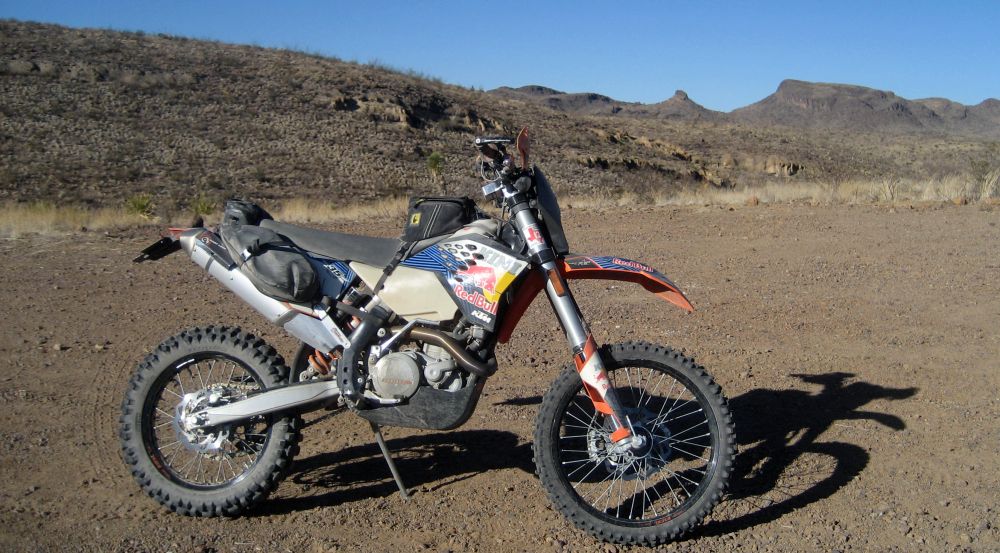 I later set it up for more long distance dual sport riding to go to Utah, Idaho, Montana, Wyoming, and Colorado. 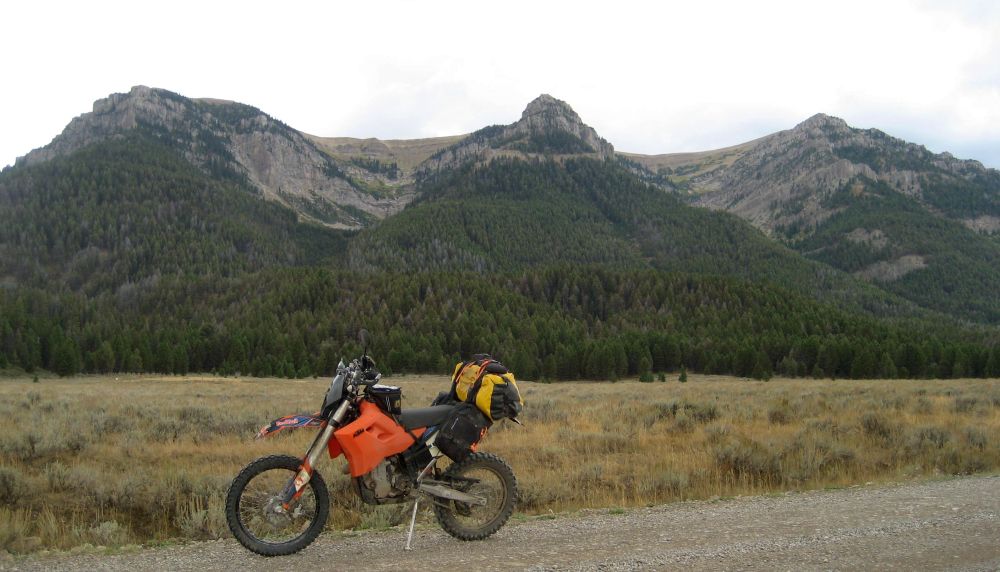 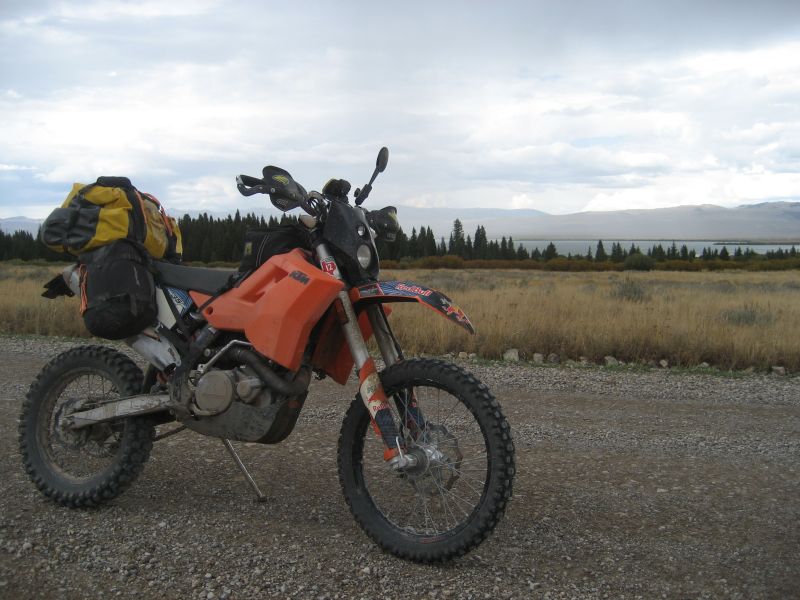 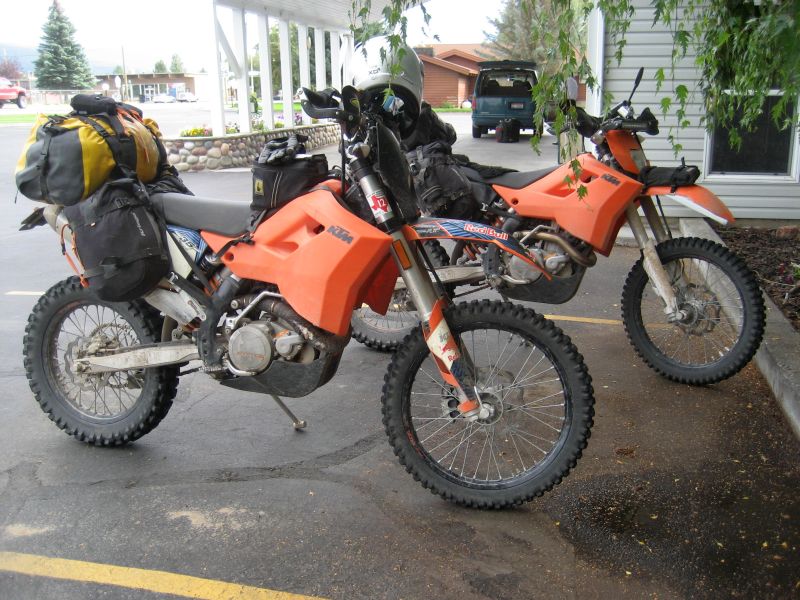 Here it has an Acerbis/KTM 6.6 gallon tank which gives me a reliable 300 miles. Side bags are the Kriega Overlander 30. They have tools, spare tubes, chair, food, stove, and other misc stuff. Top bag is Wolfman medium size dry bag that has tent and sleeping bag (light stuff). Tank bag is Wolfman Enduro bag. We camped off the bikes for seven days. 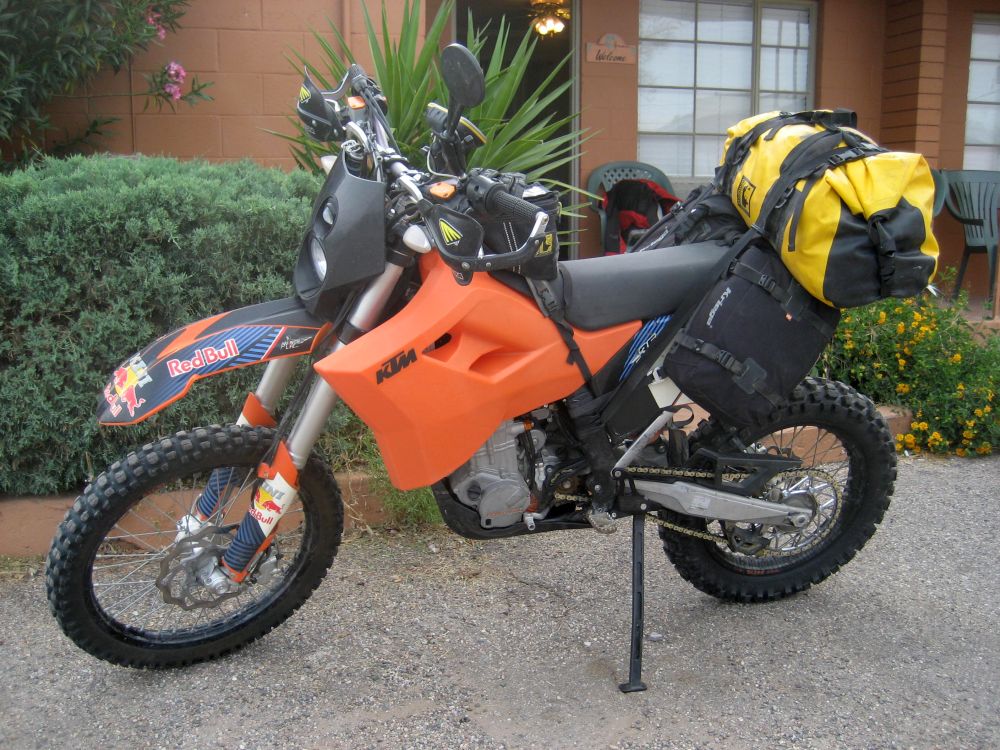 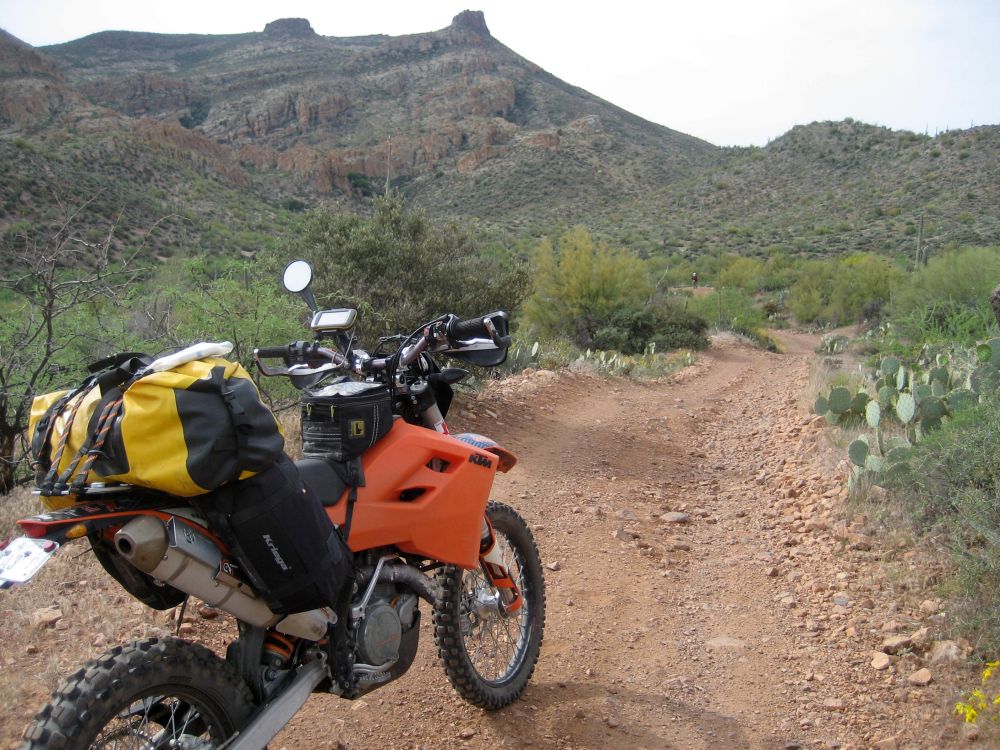 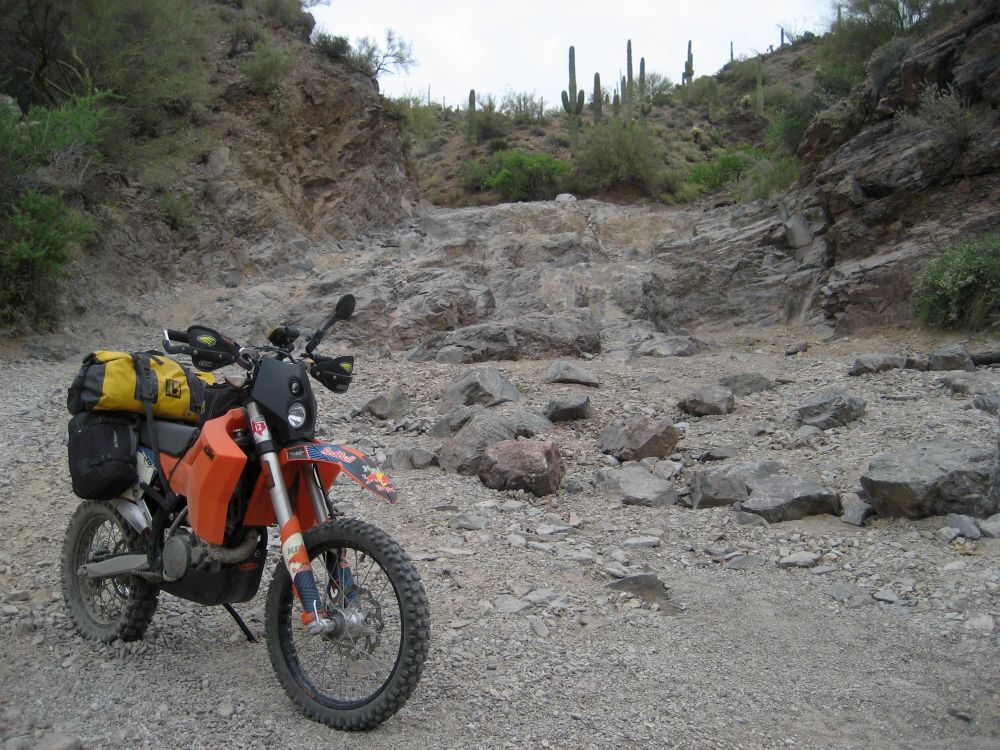 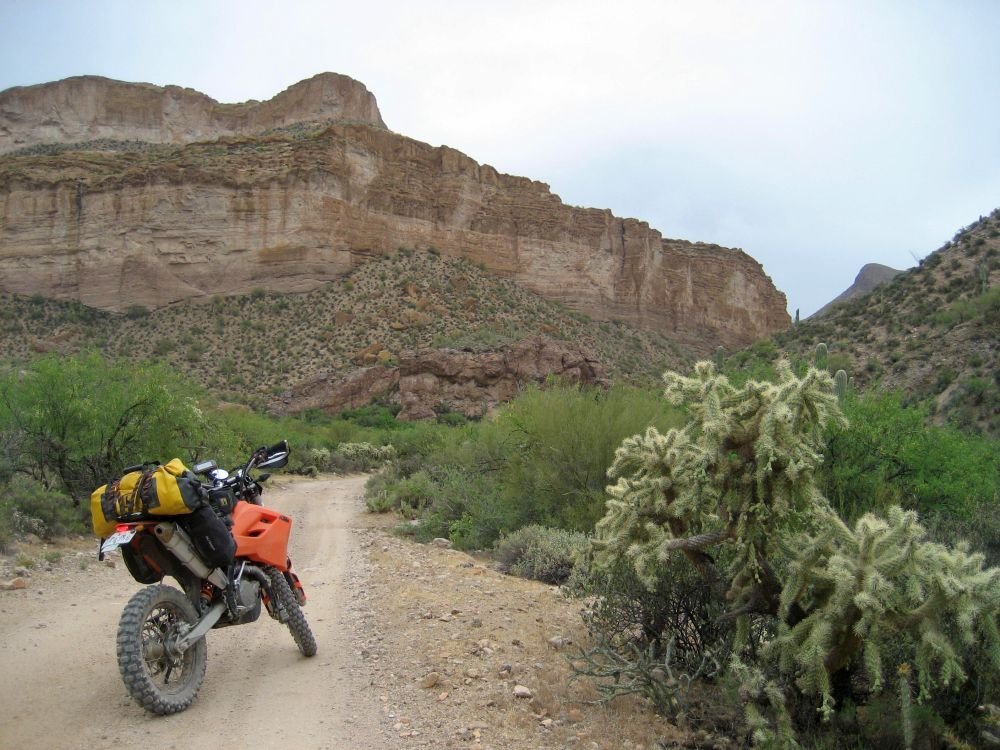 Maintenance wise, I really haven't had to do much other than change the oil. I checked the valves and they were fine. While doing the valves, I replaced the piston rings just because I thought it might help with using oil. On the long rides, it has always used a little bit of oil. It has never smoked or dripped. So it must be barely burning it. The new piston ring didn't change that. So I just check it each morning and add a little if needed. I also upgraded the oil pump gears and the water pump impeller. And I added a radiator fan.

I rebuilt the suspension a while back just because I had access to a person that could help me do it. I've also had to rebuild the Ohlins suspension on my R1150 GS and two of my R1200 GSs. Basically, if you are riding them hard, the stock suspension on ANY bike is going to need rebuilding sooner or later. It's kind of like wearing out tires, chains, and sprocket. So I don't see that as an unusual maintenance issue for this bike. Throw a bunch of heavy luggage on a bike and then ride in rough stuff and that pretty much guarantees a rebuild or replacement at some point. I had to do the same thing to my KLR 650.

I've had this bike for eight years now. I am just now at the point where I need to replace the steering head bearing because it has a "notchy" feeling right in the center of the range of motion. I replaced the steering head bearings on two VFR 800s and my 02 KLR as well. Again, it is just a wear item on any bike. I am going to replace the wheel bearings when I do the steering head bearings. They don't really need it, but I figure I will just do it while I am at it for cheap insurance. I ended up having to change the wheel bearings on my KLR because they were getting kind of crunchy sounding when I just spun a wheel in the garage. I also had to pull the KLRs swing arm and clean, inspect, and repack the swing arm bearing. We won't get into the final drive failures on two of my GSs...

The only real issue for me with this bike has been messing with the carb. This is not a failure of the bike as it would be an issue with any carbed bike that gets ridden at sea level and then 13000 ft mountain passes. You have to rejet for different altitudes. It is not hard. It just has to get done. Also, because this bike tends to sit for long periods between trips, if I forget to drain the carb, it gets nasty and has to be cleaned before a trip. I have gotten better about remembering to drain it.

Last summer I took it to Ouray for a week of riding mountain passes. It ran fantastic! That said, if I had the money, I would likely get a newer 500 just to get the FI. However, if you can't or don't want to spend the money for a 500, this is still a rock solid bike.
I

Mr Friday we need another Silverton/Ouray trip. After school starts when the crowds are gone. I couldn't make the last one. Please!

Irishcoffee said:
Mr Friday we need another Silverton/Ouray trip. After school starts when the crowds are gone. I couldn't make the last one. Please!
Click to expand...

I think I am probably done with big bike trips for this year. If I want to stay married, the next week off will have to be a family trip. Ironically, I was thinking a late fall trip to Lake City/Ouray might be nice. I just wouldn't be able to make a bike trip of it. The last time we went, I was able to take my GS and ride it with one of the kids a few days and then the other days we rented a jeep and did Engineer, Cinammon, and California passes. I was just thinking this morning about a trip like this and whether or not I'd be willing to drive a jeep over Black Bear so my wife and kids could experience it...

My jeeping experience is pretty limited.
I

Just take a tour, kids will still get the experience and you won't have to worry about your driving. Red River, NM is another great family choice and much closer. Great DS site also! Food for thought.

The 17,18,19 are great handling bikes and the gearing isn't the problem. The issue is that they are so stopped up with pollution garbage they can't run.
The muffler is stopped up, the air boot is clogged up and too small. If you change any of that you need to adjust the TPS. Once you do that you can gain almost 10 HP. The VORTEX ignition turns the bike into a fire breathing monster if you want. There are 10 tunes to chose from. Mild to wild. The only advantage I see between the Husky and KTM is the linkage. If you're a desert racer it would help. Tight single track leans toward the PDS. Like one gentleman said the composite subframe is a bummer because no one makes a rack for it. The KTM they do. If you carry any kind of weight you'll need to add heavier springs. 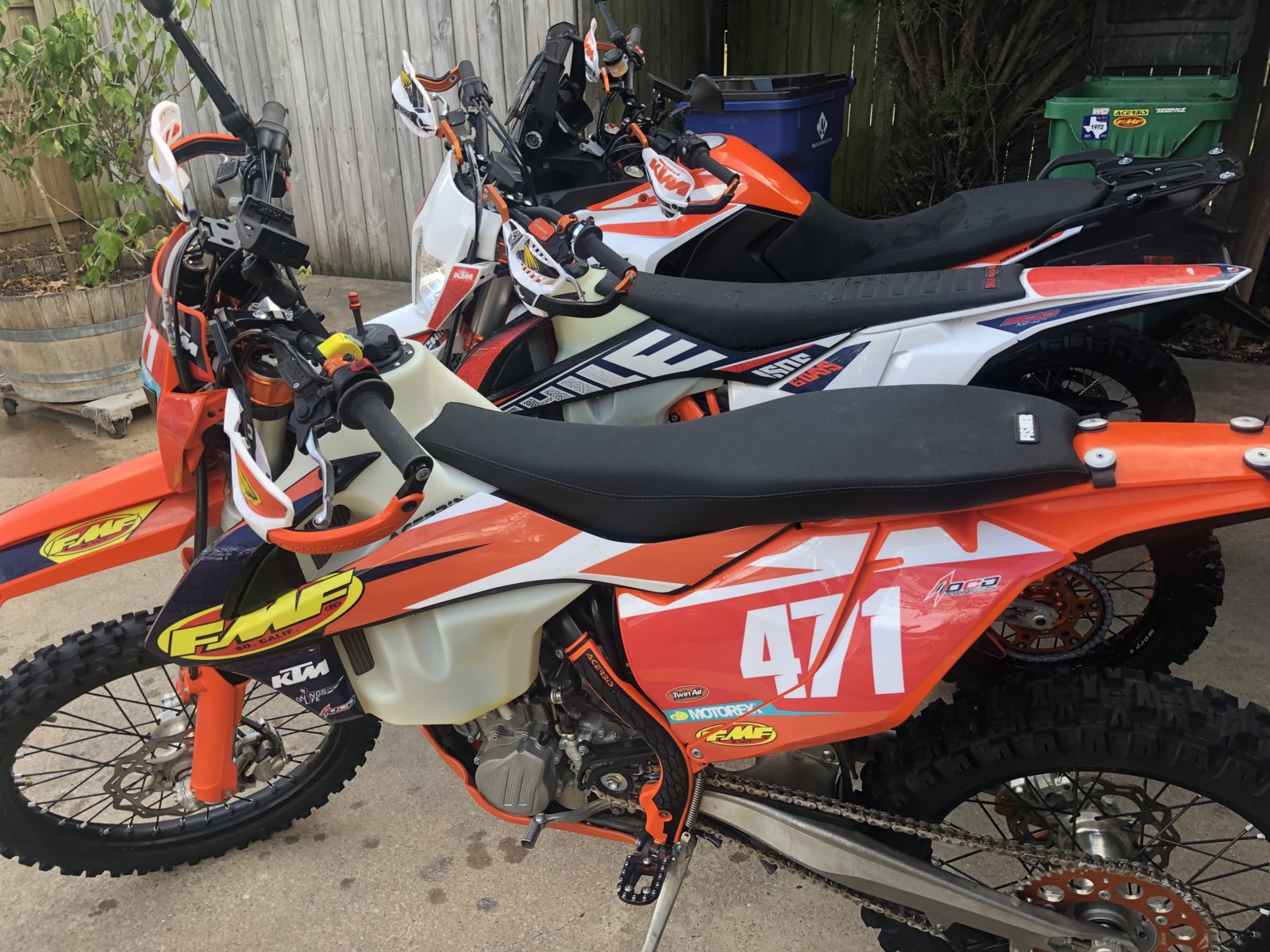