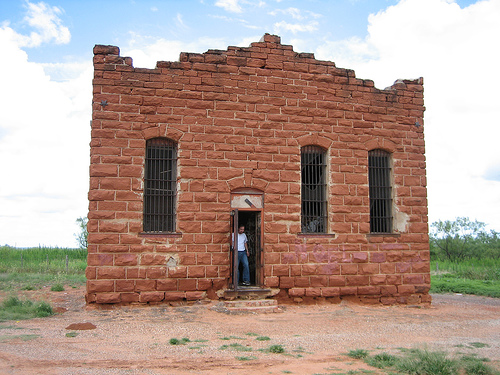 I wouldn't make a special trip for this, but if ever you find yourself in the panhandle heading down to Abilene, DFW or somewhere else south of I-20, consider turning east in Post on 380. The highway is a nice 2 laner that will offer nice scenery and drop you down in Abilene. It will also go through Clairemont where you can stop and see the old Kent County Jail. Makes a nice backdrop for a bike group picture.

History:
CLAIREMONT, TEXAS. Clairemont is at the intersection of U.S. Highway 380 and State Highway 208, fourteen miles southwest of Jayton and forty-three miles east of Post in central Kent County. The site was established as the county seat on land owned by R. L. Rhomberg when Kent County was organized in 1892. The town was named for Claire Becker, a relative of Rhomberg. A post office was established in December 1892 with Loulah Posey as postmistress. A courthouse and jail were constructed from local red sandstone and completed in 1895. By that time the town had several stores, a bank, a newspaper, and a hotel.

Although the Stamford and Northwestern Railway had bypassed Clairemont to the east by 1909, the town continued to prosper. Cotton and cattle ranching dominated the economy, and oil later became important. The population, a reported 150 during the 1930s and 1940s, grew to 300 in the 1950s, when the town's five businesses indicated a small-scale oil boom. Clairemont had several newspapers through the years, including the Kent County Sentinel, Kent County News, Clairemont Enterprise, and Western Courier. The lack of an adequate water source, declining cotton prices, and the removal of local oil camps, however, forecast an end to prosperity. After a two-year court battle Jayton became county seat in 1954. Loss of the county offices and consolidation with the Jayton schools in the 1950s caused a rapid decline. When the post office closed in 1970 Clairemont had two businesses and a population of thirty-five. The Clairemont courthouse burned shortly after the records were transferred to Jayton, and only the bottom story was preserved. Although several families lived in the area in the late 1980s, the sole resident of Clairemont was Margie (Ma) Hart. She operated the only remaining store—nicknamed the "Buzzer Den" for an earlier rash of rattlesnakes—which had become a popular local gathering place. In 1990 and 2000 the population of Clairemont was recorded as fifteen.

I used to pass by this jail in the mid 80s driving an 18 wheeler, Never did stop and look, Were the old iron cell's still in it? Nice pic. SZ.

There is so much history in places like this. In our world today sometimes the history of these small places seems like a fantasy but it was real with real people. I often try and put myself in some of these places in history and try to imagine what there life and times were like. Settling the frontier was no easy thing.

There are a couple more in his album. Cool!

I've got a shot of that one.... A buddy of mine is the Sheriff for Motley County, just to the North a bit of this one.