Great stuff Barron! I loved that area when there was some moisture out there.

This is riding in an established area that is being shut down/controlled by a combination of Federal and State forces. I need to get more active in land use issues, if it isn't too late already, but I digress.

I was running late so I put in about 20 miles of tarmac to the trailhead rather than bumming a ride from my buddy Roger. When I showed up the staging area was full of Roger's crew, "old" guys with high end bikes with race numbers on them. I've been here long enough to know what that means... these guys had forgotten more about motorbikes than I'll ever know and can still do everything one gear higher than I can

Anyway, not many pictures today because we were either hauling the mail or lost and looking at maps. Fortunately there'd been some moisture out there and the pumice dust was marginally tamped down. High temp was upper 50's, pretty crazy for this time of year. 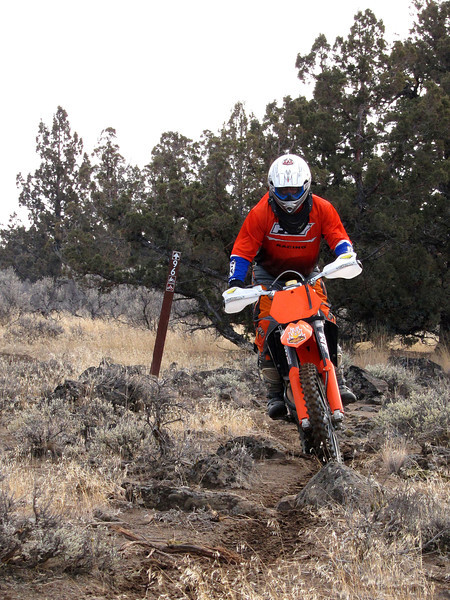 Here's Rog following the dirt trail through some rocks... 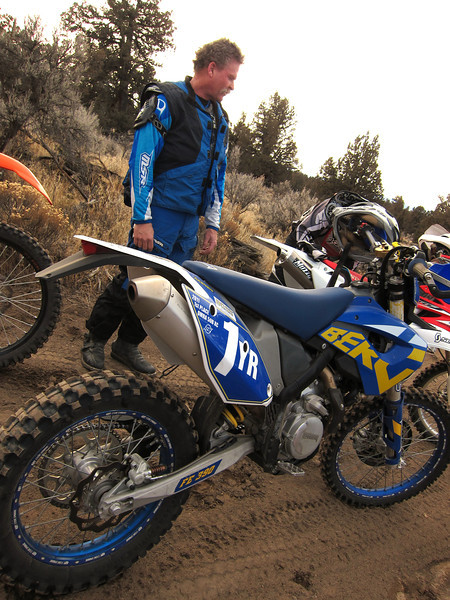 One of the aforementioned "older" guys who rode away from me at will, riding my KTM's evil blue cousin, an FE390 I believe. 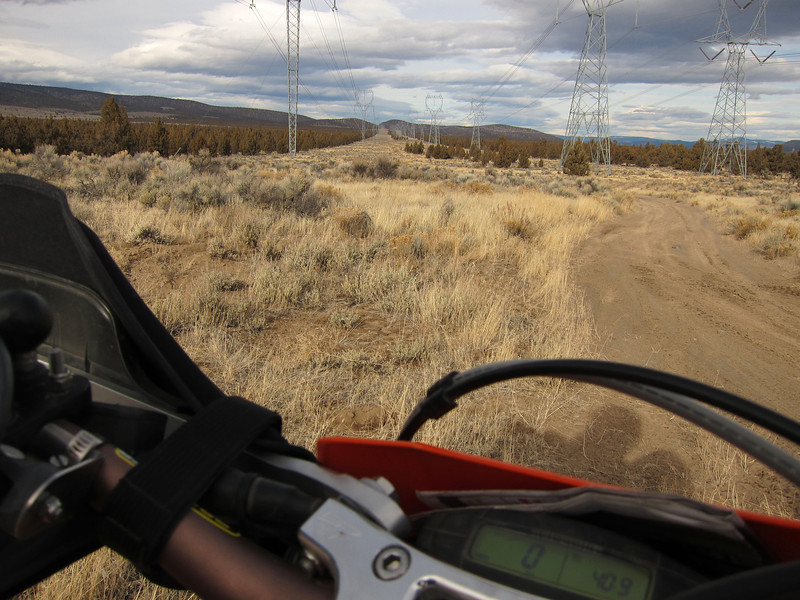 After 30 - 35 miles of singletrack I decided that I'd better head home, so I connected some powerline roads while hitting the more "established" trails on the way back. This is looking north towards Prineville I believe. 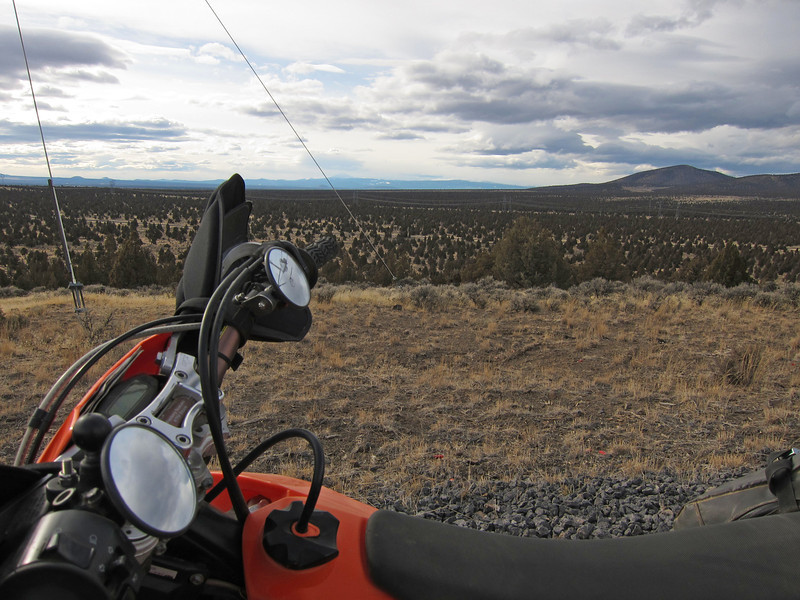 And looking towards Bend. 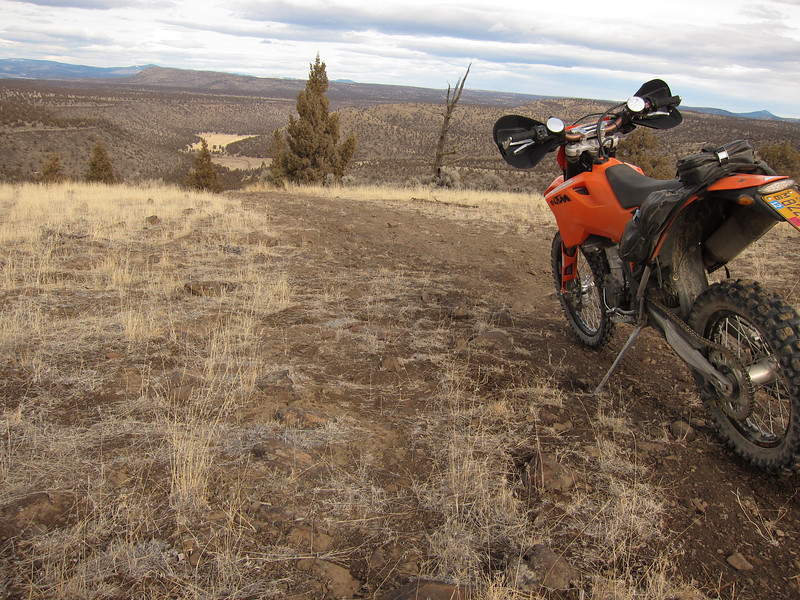 A nasty boulder filled drop is right over the edge all the way to the valley floor. Being alone and in an area that nobody would think to look for a body, I did the smart thing, turned tail, and ran like a little girl

Not bad for the last weekend in January in the PNW.

We travelled to Ecuador in December.

Rented a couple of dirt bikes for $10 an hour. Great ride. The only problem was that the volcano next to us kept dumping ash into our eyes. Goggles next time.

It was a wonderful vacation with the highlight for me being the bike rental. Beautiful trails.
I'm going to post a ride in Ecuador at the end of the year. My brother will join me. We hope to take 4-6 riders with us. We'll be your tour guides.

Hope you enjoy the pictures.

I did the pedaling thing this weekend... too much time sitting on my butt these days. 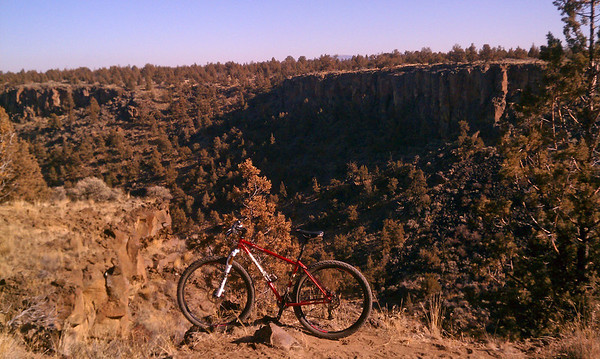 Deschutes River in the canyon... just south of Redmond towards Tumalo.

I did ride home from work on the DR tonight, that was interesting. Beautiful day today, but didn't realize that a dense freezing fog had rolled in. 25 degrees out and it was like riding through frozen talcum powder, weird.

Can't wait to be well enough to pedal again-won't be long now. Nice shots Vinny! Where did you ride those dirtbikes, trails?

Mudclod said:
Can't wait to be well enough to pedal again-won't be long now. Nice shots Vinny! Where did you ride those dirtbikes, trails?
Click to expand...

That was in the mountains of Ecuador and heading to the coast. The roses have ash from the nearby volcano. The cats are from a zoo we visited in Banos, Ecuador.

Well it's not Ecuador or Mexico, there isn't cactus everywhere, and I didn't ride any horses or have to weld any sub-frames. Then again, Izz wasn't along...

It had been a few weeks and I was itching for some miles. Besides, yesterday was a beautiful day and the KTM was getting lonely. 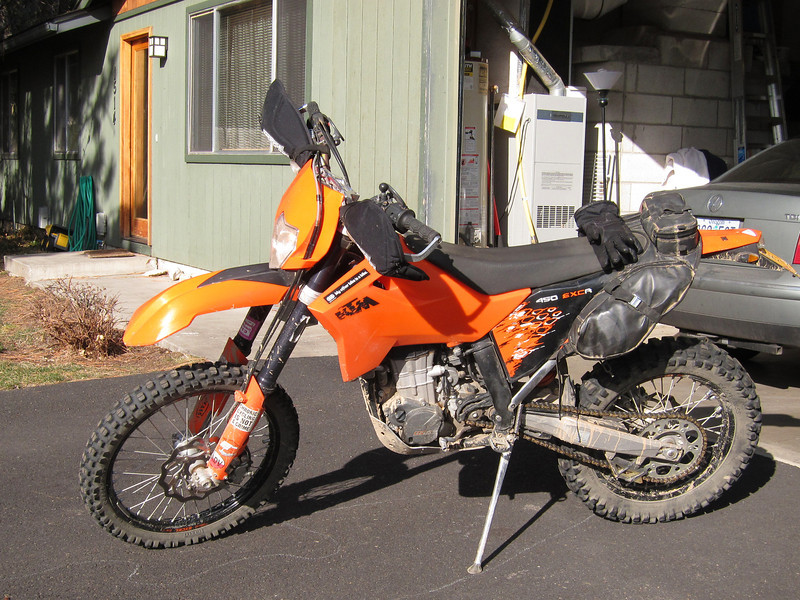 Wow! Opened the garage door and rolled the bike out and COLD! Lower 30s.

Maybe that's why all my homies bailed on me?

Anyway, my plan was to head south (yes, I'm an idiot) and see if some of our powerline trails were snow free. It's been warm and mostly dry here in Bend for weeks, how bad could it be, right? I sometimes forget that 5 miles outside of town it's still winter. After getting firmly entrenched in a line of SUVs and pickups pulling "sleds" (snowmobiles) heading for the mountain and then riding into a snowstorm, I tucked tail, turned around and headed north for Cline Buttes via the old Tumalo Reservoir. 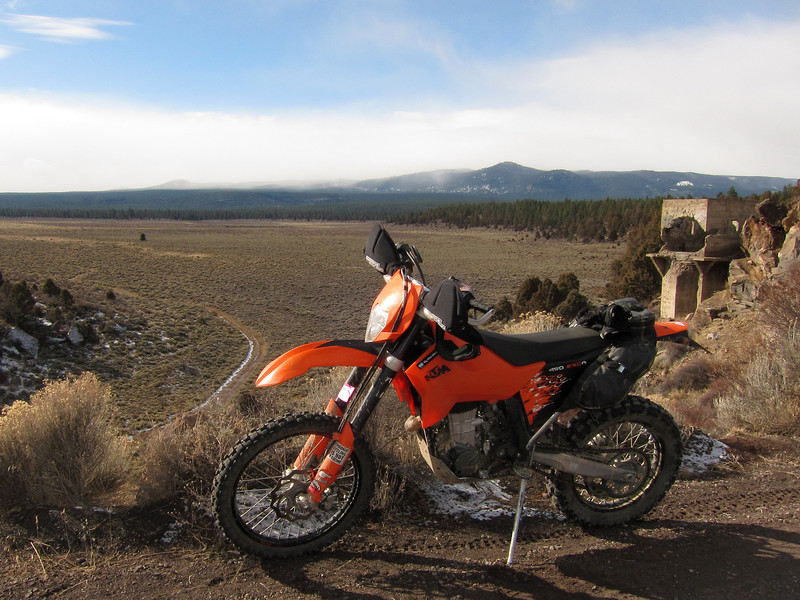 I made it to the Dam before stopping to thaw my frozen fingers on the motor. This valley was a huge boondoggle from about 1901 into the 1920s, with promises made for irrigating 27,000 acres of land with tiny Tumalo Creek. Unfortunately the area is massively volcanic (who knew??) and the reservoir never held water. Apparently giant lava tubes are hard to plug. 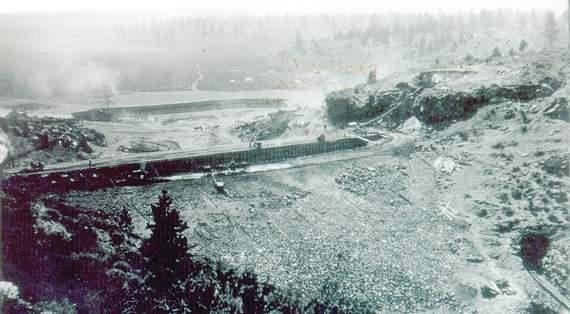 This is what it looked like during construction in 1915. 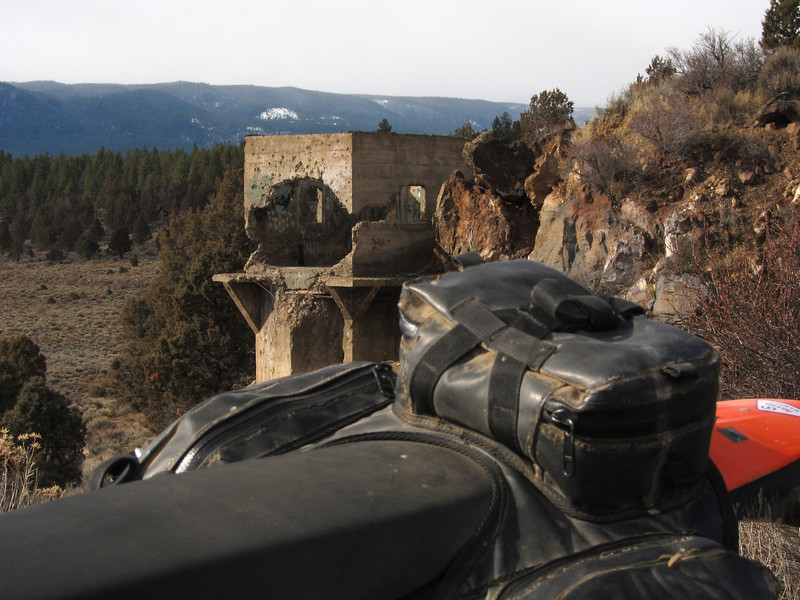 Possibly the old spillway housing? Looks like it's taken a lot of small arms fire over the years. Fingers warmed I re-mounted my steed to chase down the roadie that I'd been playing hopscotch with. Roadie, meaning a dude in spandex moving out on a roadbike. On gravel roads, with snow. Yeah... it's Bend. 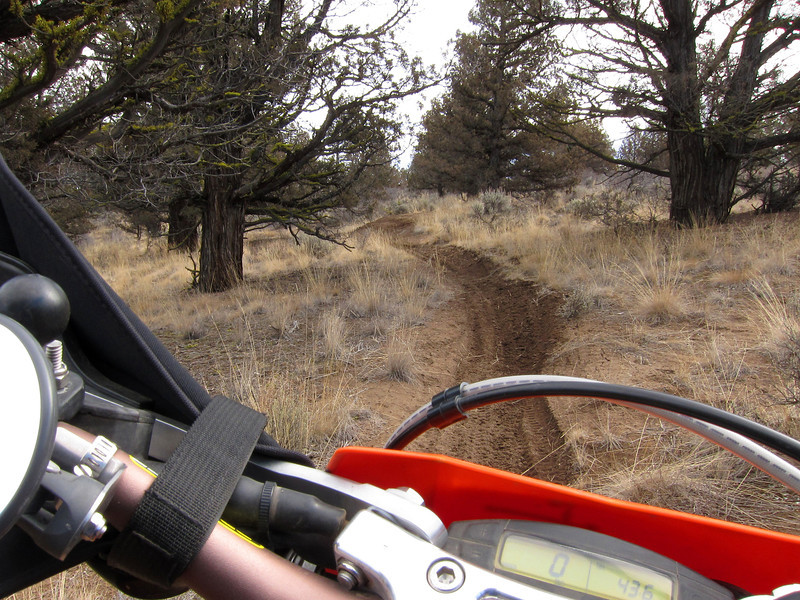 In the summer time this is talcum powder, Central Oregon volcanic fesh-fesh. In the winter looks like this if you hit it just right. 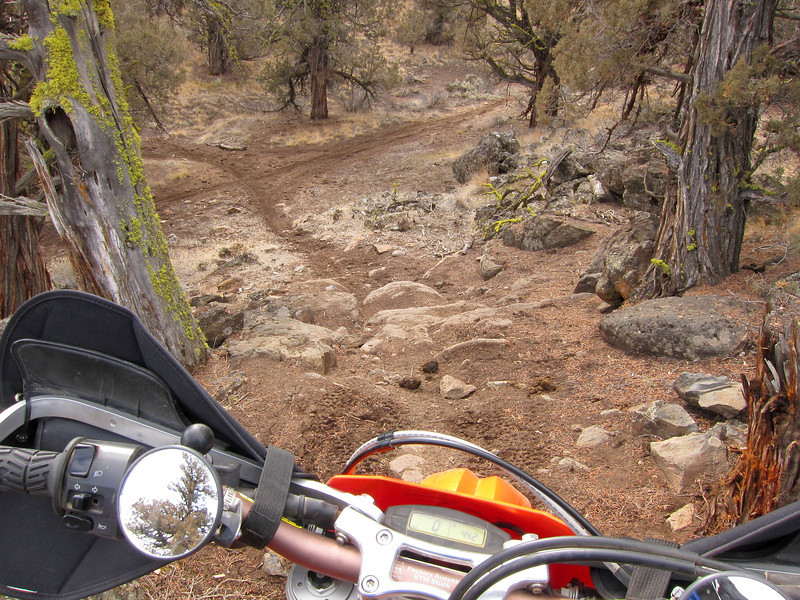 So it's steeper than it looks, yadda yadda

Especially when you're rolling solo. I was sitting here with both feet high on rocks on either side. Ya do tend to pay a little more attention riding alone out here... 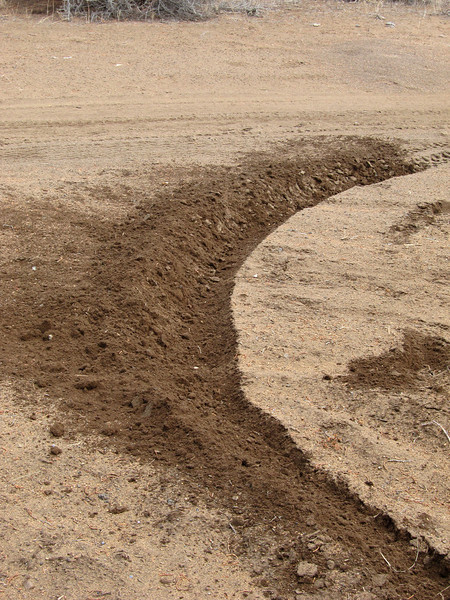 Get's a little deep at times, definitely weight that outside peg or you'll be sliding through the sagebrush or wrapped around an old juniper tree. 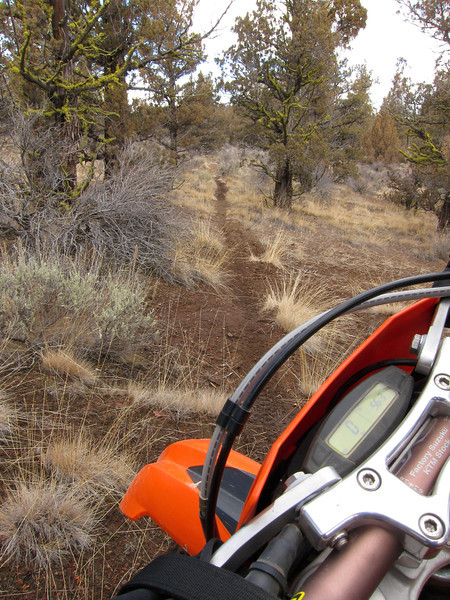 More perfect trail. Do I really have to? Really?

On the down side, it's an absolute mish-mash of signage in this area, with no consistency, no apparent plan, and no maps. Every time I hit a "Closed" sign I turned around but come on, let's get a real approach. 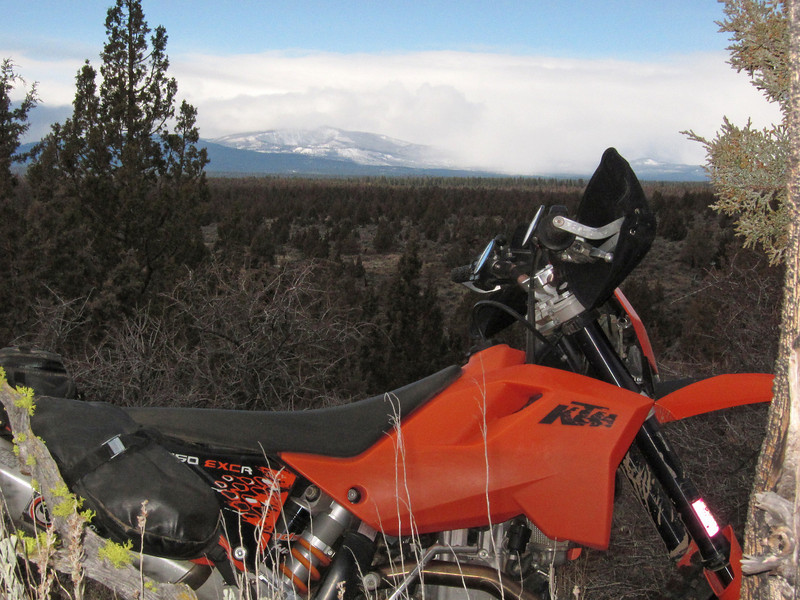 Well this was an absolutely magnificent spot but I just couldn't do it justice. Either the sky was blown completely out or the foreground was dark... little camera just can't pull off this dynamic range. But it was so cool I'm putting it in anyway

When all else fails, get video instead. 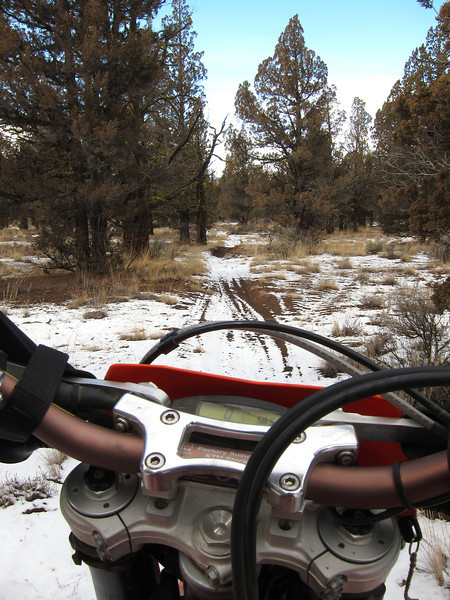 She got a little snowy at times, fortunately the dirt was deep enough and dry enough underneath that the knobbilies were still working. Definitely added to the feeling that I was the only one out there though (I wasn't... but close.) 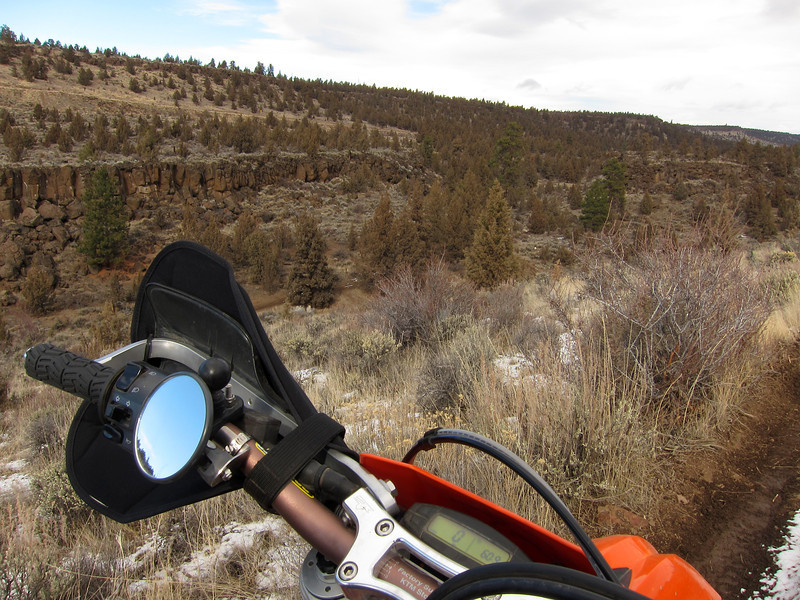 I popped out of the trees and did a hairy, singletrack descent on snow down to this ridge and then followed the narrow trail above the valley. Very nice country.

Video is in the same spot as the photo. 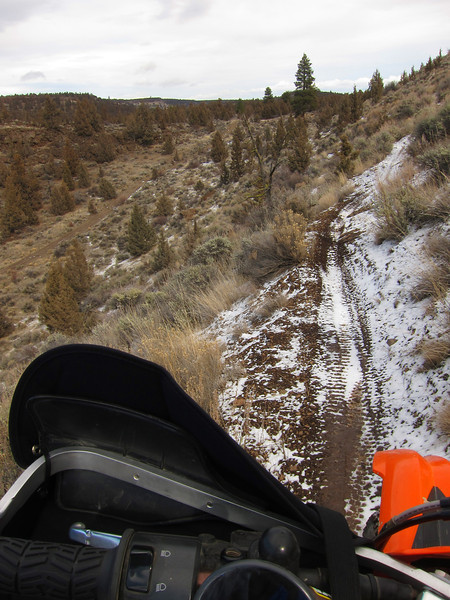 Cruising along the ridge trying to find my way back to the OHV park proper. A little sketchy at times, pretty keenly aware that I'm riding solo but I can't wait to ride this again. Did I mention I forgot my GPS? Fortunately Google maps on my phone gave me a general idea.

I rode a brand new quad track through the rocks back into the main area of the park where I stopped and talked to a Deschutes County LEO who was just finishing vehicle checks on a guy and his kids. The LEO was a really nice guy and I wanted to press the flesh and generate some good will, easy to do when you're completely legal. He told me to stay warm and have a good trip home. 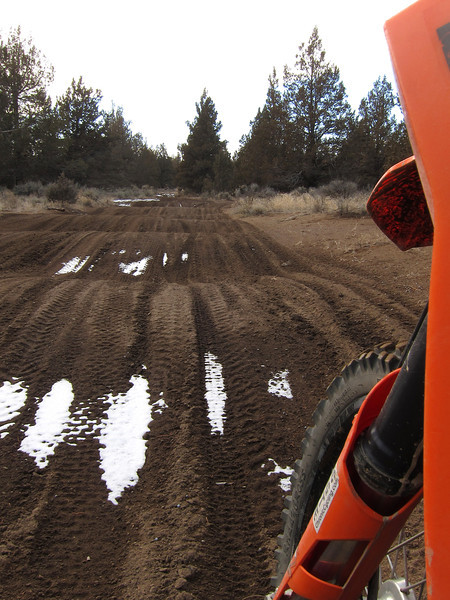 Whoops anyone? This is the main drag heading out of the park and I was ready to boogie. About the time you get comfortable hitting these little guys in 3rd gear you'll roar up to a bunch of monsters and scare the crap out of yourself. I always wonder how close some of this stuff is to Baja...

Leaving the park I stopped and talked to another family with a mess of kids on bikes. Mom said that dad had to run into town and get a couple more OHV passes... apparently the Deschutes County guy had already gotten to them

Lots of families out having fun together, I like it. Let's keep this stuff open folks! 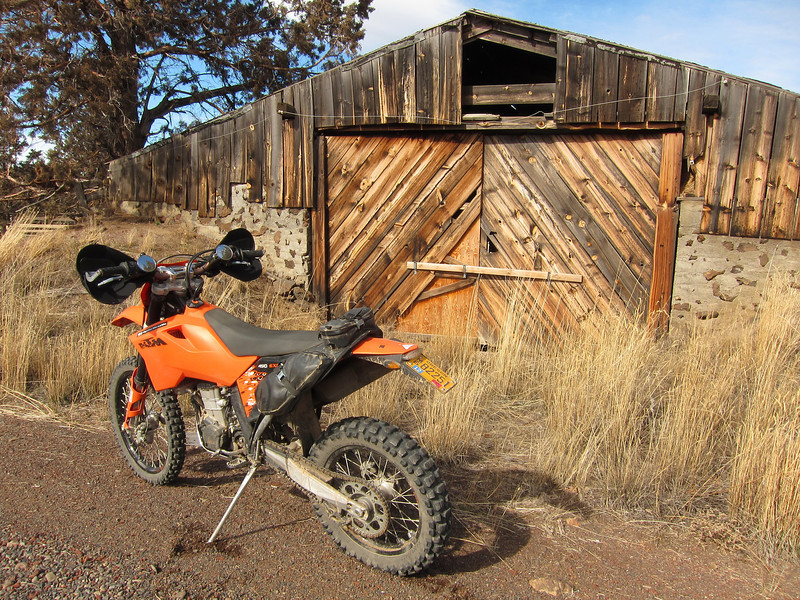 I stopped to layer up and get a shot of this old barn I've always liked at the intersection of Gerking and Innes Market roads. What do you figure, old potato barn? It's really sunk into the dirt. If I ever gain some confidence in the stability of my job, I'd love to get a few acres out here. 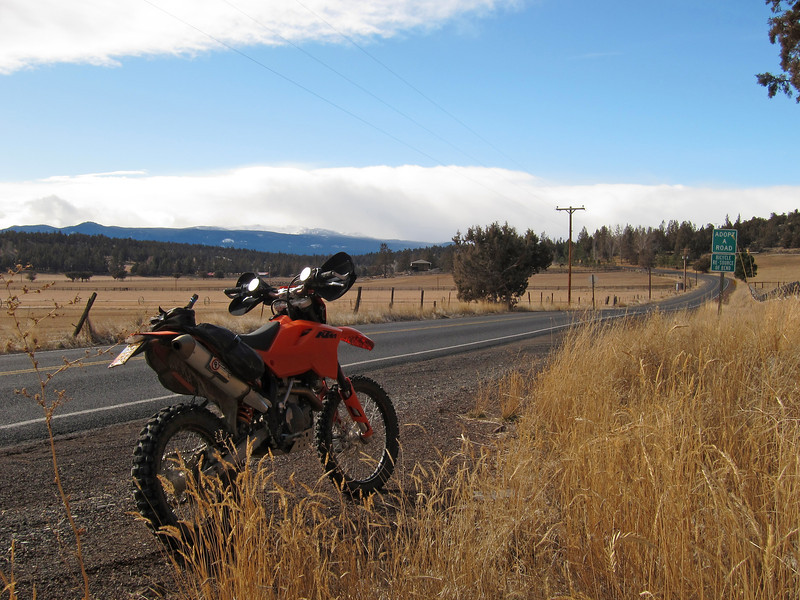 . Too bad the Sisters are all socked in or this photo woulda rocked

. All in all a darned good solo ride. Properly layered once again, I headed back home on my knobbily Orange Colored bike.
Last edited: Feb 19, 2012

So do those giant wind deflectors on the hand guards really help?

Tourmeister said:
So do those giant wind deflectors on the hand guards really help?
Click to expand...

(Maybe not at Texas temps though...)

Location
Back home in ATX

Great ride yesterday. Lots of gravel, water, twisties, and great views.
When you ride with Mark, you wear off your chicken strips, get dusty, get wet, get muddy, and get bovine excrement on you bike.
The "http://en.wikipedia.org/wiki/Gordie_Howe_hat_trick of motorcycling.

Mark, I LOVE that first show of the KLR on the left - water in front.

That is a great route in April when the wild flowers are really blooming. I especially like Althus-Davis Rd. 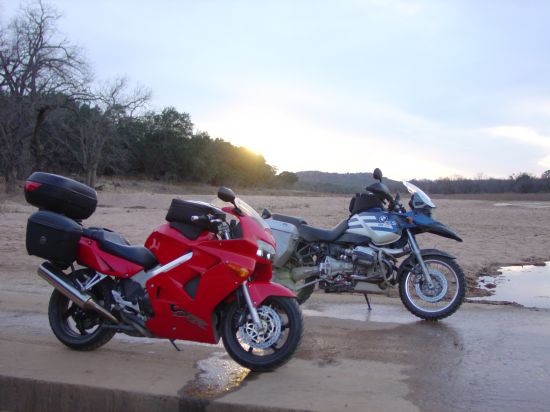 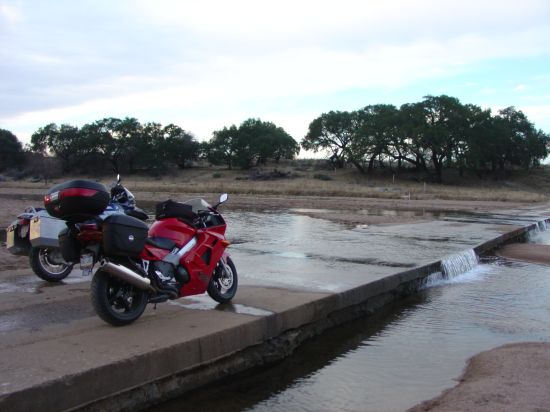 It was INSANELY slick!! Once on the far side of the crossing, after I pulled the seat cover out of my backside..., we switched bikes. That sealed the deal for me and a few months later I had an 02 R1150 GS

Dang Mark nice ride! You hit just about all the good stuff out there!

Coolhand said:
Dang Mark nice ride! You hit just about all the good stuff out there!
Click to expand...

It was worth it to see John's GS get cattle poop on it!

Haha! Clod everything works in that video, subject, sound, composition. Nicely done. Although I did keep waiting for the 50mph roll on wheelie...

Thanks Justin, yeah, he's a little shy with that happy knob on the right!

Did you get a new/old Suzi? I thought you just had the KLR.

The Bruce said:
Did you get a new/old Suzi? I thought you just had the KLR.
Click to expand...

Morning Bruce,
This used DR200 was bought for my wife.....but someone's got to warm it up once in a while.

I keep trying to get M38A1 on it to show him the gravel-dirt lovelies that exist in Milam county!! If a little underpowered; it's a fine little lightweight bike!

Great size for putting around, and the purple and white with a splash of yellow was a good color.