Road Rage in Colorado on I25

Jcstratt said:
No difference? I respectfully disagree. The brother said in the interview they watched the truck approach them on two occasions. They made a choice to continue interacting on the road the second time. I have been in that situation on several occasions, I never made it my choice to have a second encounter. As previously mentioned, 4 wheel vehicle versus motorcycle is never a winning deal of the motorcycle. Attempted murder sounds harsh, but is probably an appropriate summation. Don't get me wrong, I'm not advocating pulling a weapon while riding down the highway. However, it certainly gives one a very different mindset in how to deal with things. They chose poorly.
Click to expand...

Realistically, what are you going to do? Pull it out while riding and try and shoot?

Sounds like a really good way to escalate and guarantee they try and use their vehicle to defend themselves to me. I just can't see that ever working out well for the motorcycle rider.

Personally, the only way I see it working is if you pull over and stop. If they stop with you, then you get off you bike, pull your weapon and defend yourself.

But..maybe you're just way more proficient at drawing, aiming and hitting a target with one hand while riding a motorcycle than I am.

A firearm will do bupkis while you're on the bike except lead you to crash.

I carry pieces of ceramic tile chips in my riding vest pockets. Instant window shatterers. On the IBA Big As Texas rally ride in San Antonio a friend got chased down by a white construction van and I had no way of fighting back, so those have gone in my vest ever since. 8-10 small tile chunks on each side, ready to be flung at their windshield like a handful of sand in the eyes of an attacker.

Haven't ever had to use them yet, but then I tend to follow the "leave them in your dust" strategy and haven't had one able to keep up yet.
J

cheez said:
I tend to follow the "leave them in your dust" strategy and haven't had one able to keep up yet.
Click to expand...

"What's that you say? You want to see if my bike can go 120+ mph down this road? Sure thing, no problem"

I guess if a Ferrari ever gets mad at me, I'm in trouble. Thankfully, I only seem to anger the slower vehicles

I keep an extendable ratchet handle in my tank bag. Realistically, no help at speed; I suppose I could knock a windshield out with it, if I didn't lose control and kill myself when swinging it. It's protection for while on the side of the road, not while on the road.


Jarrett said:
I guess if a Ferrari ever gets mad at me, I'm in trouble.
Click to expand...

I actually have a couple of Ferrari friends. Based on my observations, exoticar drivers are either (1) afraid to drive them, so they keep them parked and garaged, or (2) uber careful when they drive them because a simple scratch is a multi-thousand dollar incident.
J

did they catch the nut job in the truck?
J

We all have had or will have encounters with really stupid or emotionally distraught people in vehicles. Do you best to concede and not provoke folks out there. In TX every idiot is now armed so you will lose any encounter if you are a nice, armed citizen. Not a particularly good thing for a guy like me who can be quick to flip off some moron perhaps encouraging a bad situation. And yes I'm armed too, but do not ever want it to come to that. Heaven forbid I shoot a punk black guy vs. a punk white guy, cause right now, the black lives are worth 2x what a lost lawsuit on a having shot a white guy. Really? Heck, just don't shoot anybody unless you have too, as blessed are the peacemakers per our Lord!!

Guys, don't escalate stuff on the road. And do not damage other people's property regardless if you're on your bike or vehicle.

Monica said:
Guys, don't escalate stuff on the road. And do not damage other people's property regardless if you're on your bike or vehicle.
Click to expand...

Yup. The best response is all too often the hardest -- to just let it go. Road rage deaths or injuries nearly always happen after a series of escalations between the two involved parties. Show him your pistol and he might just show you his cannon. I've learned the hard way to just look straight ahead & pretend I'm too obtuse to notice the other guy.

I've been using a bit of a mantra when things happen on the road. I just say to myself " that person just found out their child has terminal cancer" Makes me give them plenty of room and I feel sorry for them.

This is a pretty interesting thread - you get a sense of perspective on a lot of issues beyond this particular news story that are taking place in the US and worldwide. I'm happy that even with very strongly held differences of opinion, at least in this thread people are treating each other with respect and courtesy. Gives me a bit of hope.
J

I just got back in to road riding again (Picked up a R1200 GSA on Friday. Rode to The Woodlands on Saturday with my stepdad. On the way back a car was driving pretty crazy and **** near hit my stepdad. Dude got held up by some cars and we passed him, so he started raging hard. Driving next to me, waving hands and hollaring. I just pointed down at my G19 that was clearly visible and the dude backed off real quick.
T

cheez said:
A firearm will do bupkis while you're on the bike except lead you to crash.

I carry pieces of ceramic tile chips in my riding vest pockets. Instant window shatterers. On the IBA Big As Texas rally ride in San Antonio a friend got chased down by a white construction van and I had no way of fighting back, so those have gone in my vest ever since. 8-10 small tile chunks on each side, ready to be flung at their windshield like a handful of sand in the eyes of an attacker.

Haven't ever had to use them yet, but then I tend to follow the "leave them in your dust" strategy and haven't had one able to keep up yet.
Click to expand...

Pffffft!...bupkis? Where are you from?...New York city? In Texas we've been shooting from our steeds forever and with deadly accuracy. Don't you watch the westerns?...or are you just watching Oprah?

TNC said:
Pffffft!...bupkis? Where are you from?...New York city? In Texas we've been shooting from our steeds forever and with deadly accuracy. Don't you watch the westerns?...or are you just watching Oprah?

Guess I better learn to shoot with my left hand.

Either that, or only get into road rage fights on bikes with cruise control.

Seriously though...shooting from a horse and shooting from a bike are pretty different. Hopefully this is known and the post was intended as a bit of humor.

Guess I better learn to shoot with my right hand.....

In reality, we all know what's likely happen if you try to actually aim a pistol from a bike, and it isn't pretty. You could try aiming blindly with your left hand; let me know how that works out.

But the greater problem with taking any action - point your pistol, brandishing your pistol, pointing to your pistol, is that when the other party is already worked up, you're as likely as anything to invoke the Crocodile Dundee effect. 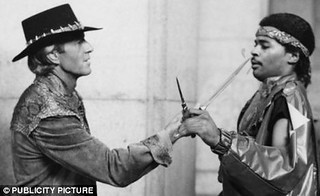 So hmm, what's your next move? And on top of that, he's still inside a 2-ton vehicle and you're still exposed on a bike.

The smart money is on not doing anything that will escalate the situation. This morning, I found this follow-up story. 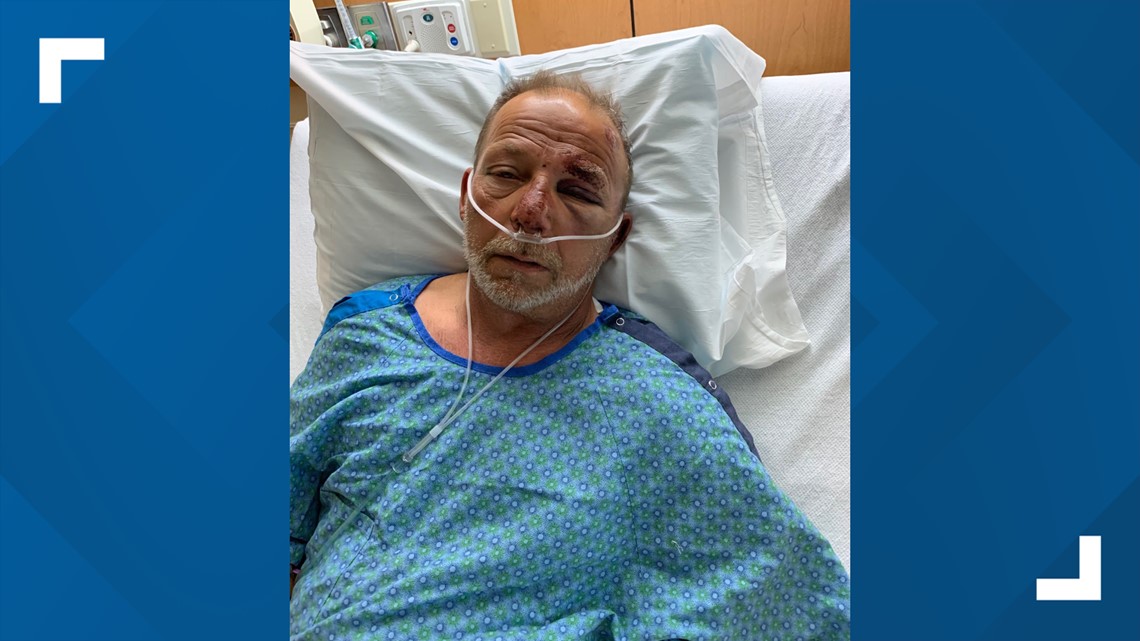 The Aug. 16 collision on the highway near Castle Pines was captured by the dash camera of another driver.

It indicates that, unlike the motorcyclists' original claim of "we didn't do anything," they probably did quite a bit and their actions escalated the situation. And of course, they then rode off into traffic thinking it was all over; they didn't account for the fact that, to the pickup driver, it wasn't over. So the reality is that, no matter how legally wrong the driver was, their actions had consequences. It sounds as if the pickup truck driver now has a long list of charges he'll face, and he can probably count on some significant prison time as a result. The riders can take some consolation from that. But with their friend and brother having spent 9 days in the hospital, they should be examining their own part in this and asking what they'd do differently if they could get a do-over.

That's why if I accidentally cut someone off, I wave & give what I hope is a sheepish shrug. If somebody gets mad & there's nothing on my part, I stare straight ahead and try to look clueless. 99 times out of 100, the driver will just move on if you don't want to play. You may feel like you lost a little face, but who cares - you'll live to ride another day.

jkelley82 said:
Guess I better learn to shoot with my right hand.....

Thats cool. Your bike has the throttle on the left side???
Click to expand...

Invert left and right in my post and it will make more sense.

However...I think I will edit it.

Where did you get that video of me? My department has strict rules about releasing videos.

Obviously I was kidding about shooting from your motorcycle and western cowboy movies/shows. I'd hoped that was obvious...except for New Yorkers.

I didn't notice where that police video was from, but I've seen a few from Brazil with cops shooting from their motors...and doing it with some...I say "some"...efficiency. When in the combat zone, you do combat zone stuff.

I could see some wild and weird scenario where I'd shoot off of my motor, and I have trained to shoot weak hand. But it would have to be some crazy stuff before I'd resort to that. But in Brazil...

I tried to find the one of the guy shooting his ar-15 while standing. Not sure how efficient it is but looks cool.
I think it's smart for anyone to learn to shoot with both hands.
Last edited: Sep 8, 2020

Jcstratt said:
I suppose you could carry these in a tank bag...kinda scary they are sold out.
Click to expand...

In Texas those are actually illegal, not sure about other states.

As I've gotten older I have learned to very judiciously use my horn, middle finger, etc. I reality the best move is pull away, pull off if possible to just remove yourself from the situation. Like others I always carry o matter what I am doing, especially in today's world. That however is always a last resort and one that I would not even attempt while riding but left in reserve should someone follow up after I have stopped my bike while turning in somewhere to avoid the situation.