I've only ridden from moab north. What are you seeing down south?

What do you ride

Riding Texas said:
I want to do white rimm trail burr trail Moki Dugway then some north on bdr
Click to expand...

Burr Trail is one of the coolest roads I've ever ridden. Do a loop through Valley of the Gods.

What do you consider big bikes?

Riding Texas said:
What do you ride
Click to expand...

X1Glider said:
What do you consider big bikes?
Click to expand...

First time I rode the Utah bdr was on a loaded 1200 gs. It can be done but the stretch from moab north to the wasatch range was a struggle. And it's bloody hot on the floor of that desert. One entire day of bottomless loose sand. We kinda got used to it after a while but seems like I was always just one wrong twitch away from picking up a heavy motorcycle...again. A guy on an 1190 buried the rear and took right at an hour getting it out. That sounds crazy but when the sand is that loose things don't work like they normally do. It was more like liquid than sand...guess you had to be there.

Too bad there aren't more STREET riders here!!! A lot of beautiful country to see without having to pick up your bikes!!

I've ridden the Burr Tr until it turned to dirt. Very beautiful.

As I have written before, if you guys decide and post dates I can ride up and meet for lunch/other.

Location
City by the Bay

Not sure I want to ride the 890 all the way out there but I am up for some dirt riding out there, BDR style.

I am not able to go, but would you be open to someone meeting you there at a start location? That might allow some folks to do the bulk of the fun riding with you and skip the whole West Texas thing, which kind of sucks on any bike

Some years back, I did a great ride through Southern Utah and Western Colorado. I was two up with lots of luggage on my 1200 GS. It was all dirt, but not too hard. VERY remote and scenic! Parts of it could be a bit nasty if the weather turned wet... We got mostly lucky and it was dry. We went mid September and temps up high were sometimes in the 40s. A few days it was in the upper 20s in the mornings but warmed up by noon. We dodged some rain and hail one day, but most of the time it was pretty. The trees were also changing colors. A lot of the route was dirt, but there were a few stretches of fun highway.

We originally planned to run 276 over to the Ferry at Lake Powell and then run up to Burr Trail to cut over to Bryce Canyon. However, the ferry was down for repairs and waiting on parts in definitely at the time. So we did the run up 95 to 12 and 24, which is an EXCELLENT ride even though paved.

The section up near Provo was altered on the fly due to NASTY weather. The original plan was to continue up over the next set of mountains to US 40 and then head into Heber City. The following day we were going to run across the North face of the mountains running East just below the Wyoming border. I had been told by several folks on AdvRider that the route between Wy 150 and Flaming Gorge was doable on a big adventure bike unless it was wet. It rained the entire night before in that area so we detoured South of the mountains as shown in the GPX file. The little backtrack at the start of the day was due to super slick mud, so we opted for the safer route since I was two up with my 11 year old daughter. The run down to Duchesne was nice, but after that it was pretty much boring highway over to Rangely where we stopped for the night.

Prior to this trip, I ran a route West from Blanding, Ut. The roads were Brushy Creek Rd., Elk Mtn Rd., Woodenshoe Rd., and Fortknocker Rd., over to US 95 near the Hite Marina at Lake Powell. There is gas and snacks here if the Marina is open. Otherwise, the next gas is up near Hwy 12 at Hanksville. That is a nice large station with food. This route was done with all the riders on big bikes: 1200 GS, 1200 GSA, and a few others. It was never difficult, but there were some stretches that could be nasty if wet just because they'd be real messy. It was a very cool route though!

I know there are guys that ride this kind of stuff alone, but some of the areas are very very remote and there is zero cell coverage. IF you do end up riding alone, I would highly recommend some kind of PLB/SPOT, etc,...

The forum GPX viewer won't display multiple tracks, it just shows some way points and stuff. However, if you download and open the file in a GPX viewer, it should show all the tracks for each day.

I'll bet your daughter will remember that forever!! Great riding where you went!
M

Riding Texas said:
Anyone interested in riding some famous trails in southern Utah in maybe early fall of 2022
Lots of great and famous trails out there and it looks beautiful
Steve
Click to expand...

Blue is Best said:
Too bad there aren't more STREET riders here!!! A lot of beautiful country to see without having to pick up your bikes!!

I've ridden the Burr Tr until it turned to dirt. Very beautiful.

As I have written before, if you guys decide and post dates I can ride up and meet for lunch/other.
Click to expand...

The Burr Trail can be ridden on just about any street bike at least until the junction with Notum. Turn around when you get to the Notum/Bullfrog dirt road and enjoy it all the way back. I've done it on an FZ1 with no problems. It's about 5 miles of this and stunning. Here's the road 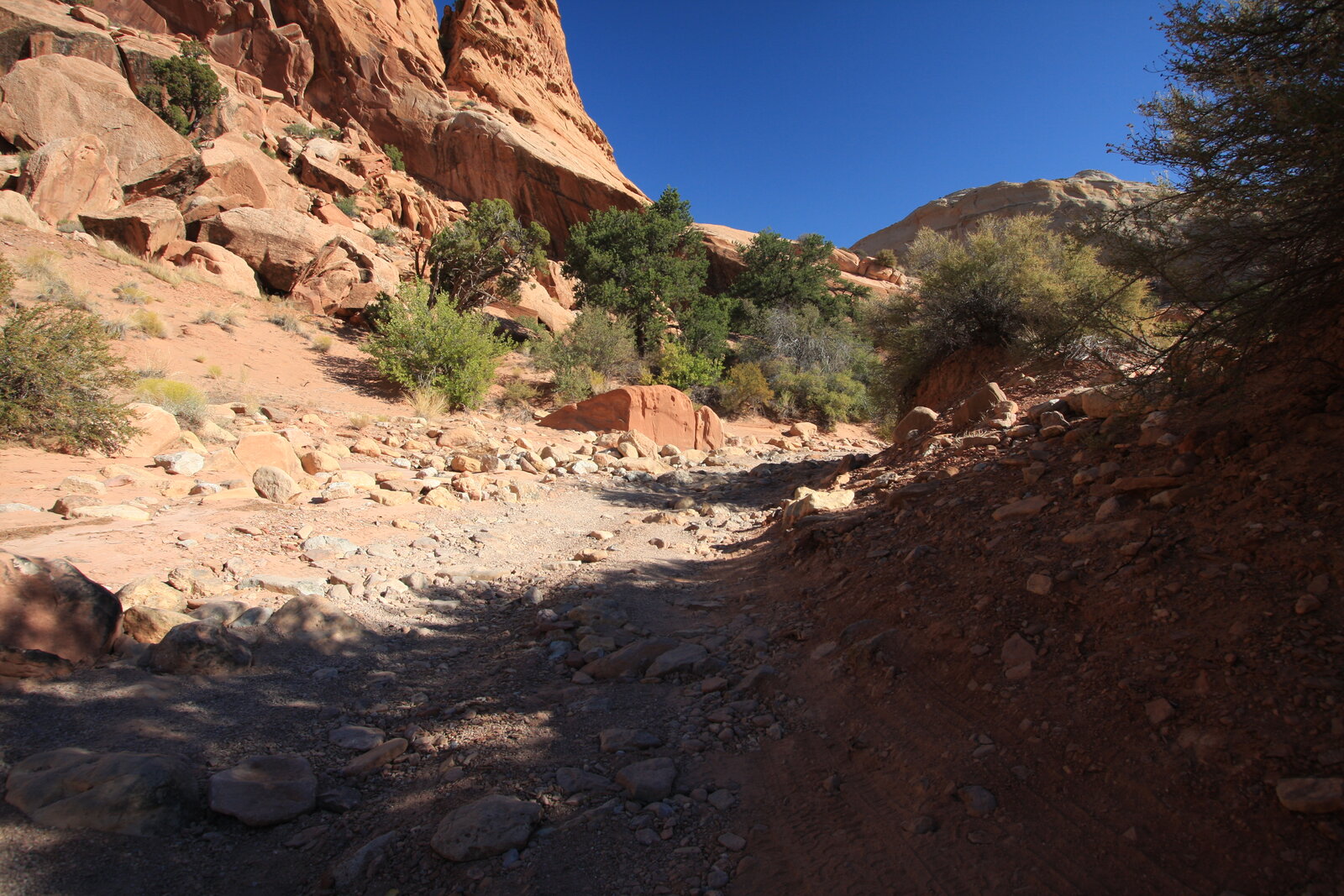 Just kidding. That's a little side road that goes to a beautiful overlook.
The turn around point at the Y in the middle of the picture. The road is graded the entire way and is hard packed. 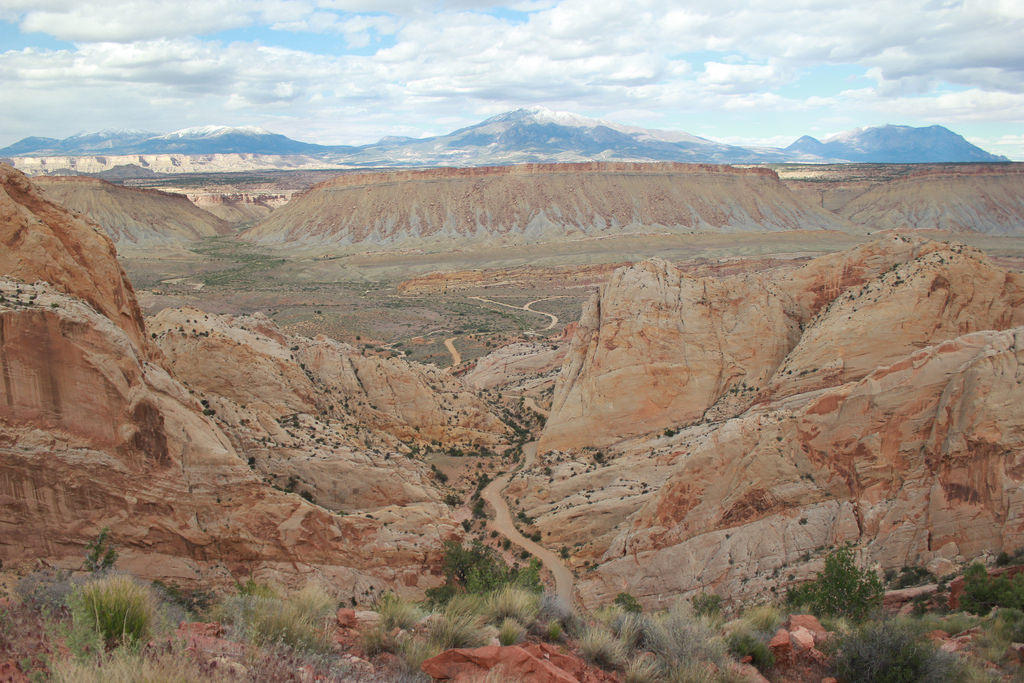 humanrace said:
The Burr Trail can be ridden on just about any street bike at least until the junction with Norum. Turn around when you get to the Notum/Bullfrog dirt road and enjoy it all the way back. I've done it on an FZ1 with no problems. It's about 5 miles of this and stunning. Here's the road
View attachment 311762

Just kidding. That's a little side road that goes to a beautiful overlook.
The turn around point at the Y in the middle of the picture. The road is graded the entire way and is hard packed.
View attachment 311763
Click to expand...

I did it a few years back on my Versys. Great ride and beautiful country. This was my campsite off that road that night. 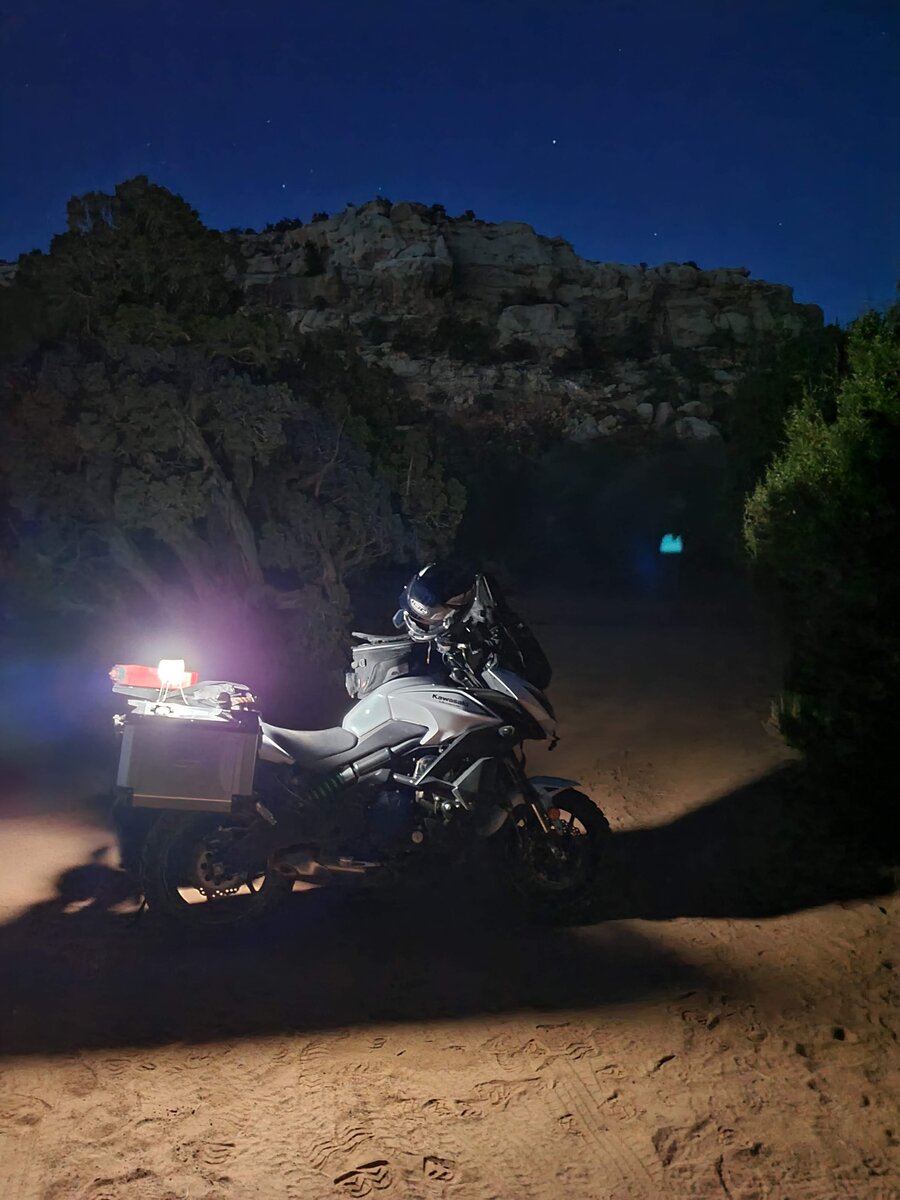 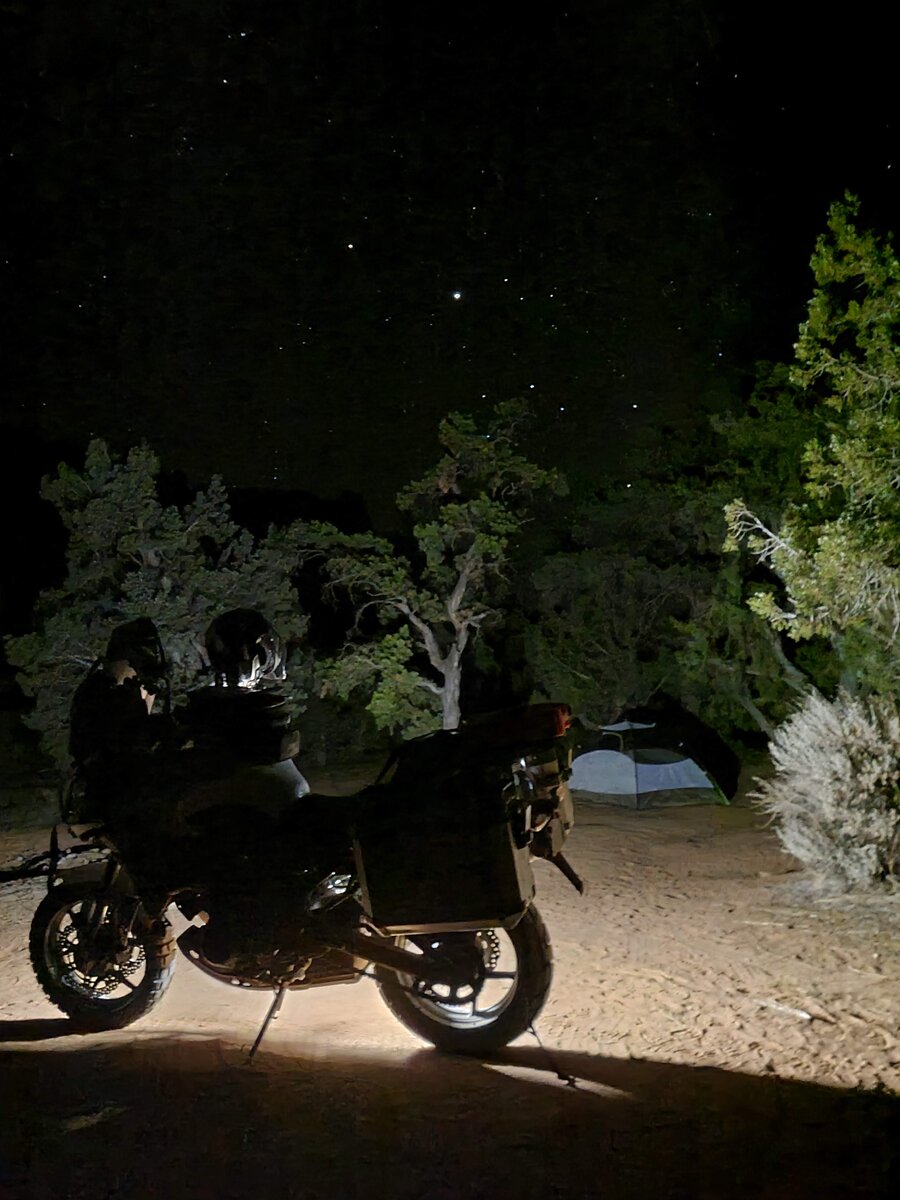 Riding Texas said:
I want to do white rimm trail burr trail Moki Dugway then some north on bdr
Click to expand...

I don't think I could do the White Rim trail on a big bike. It's a class 4 ride. The Shafer Trail portion is easily done on a big bike and is the most scenic portion. Shafer does not require a permit, but I'm fairly certain the WR Trail does.
Shafer Trail 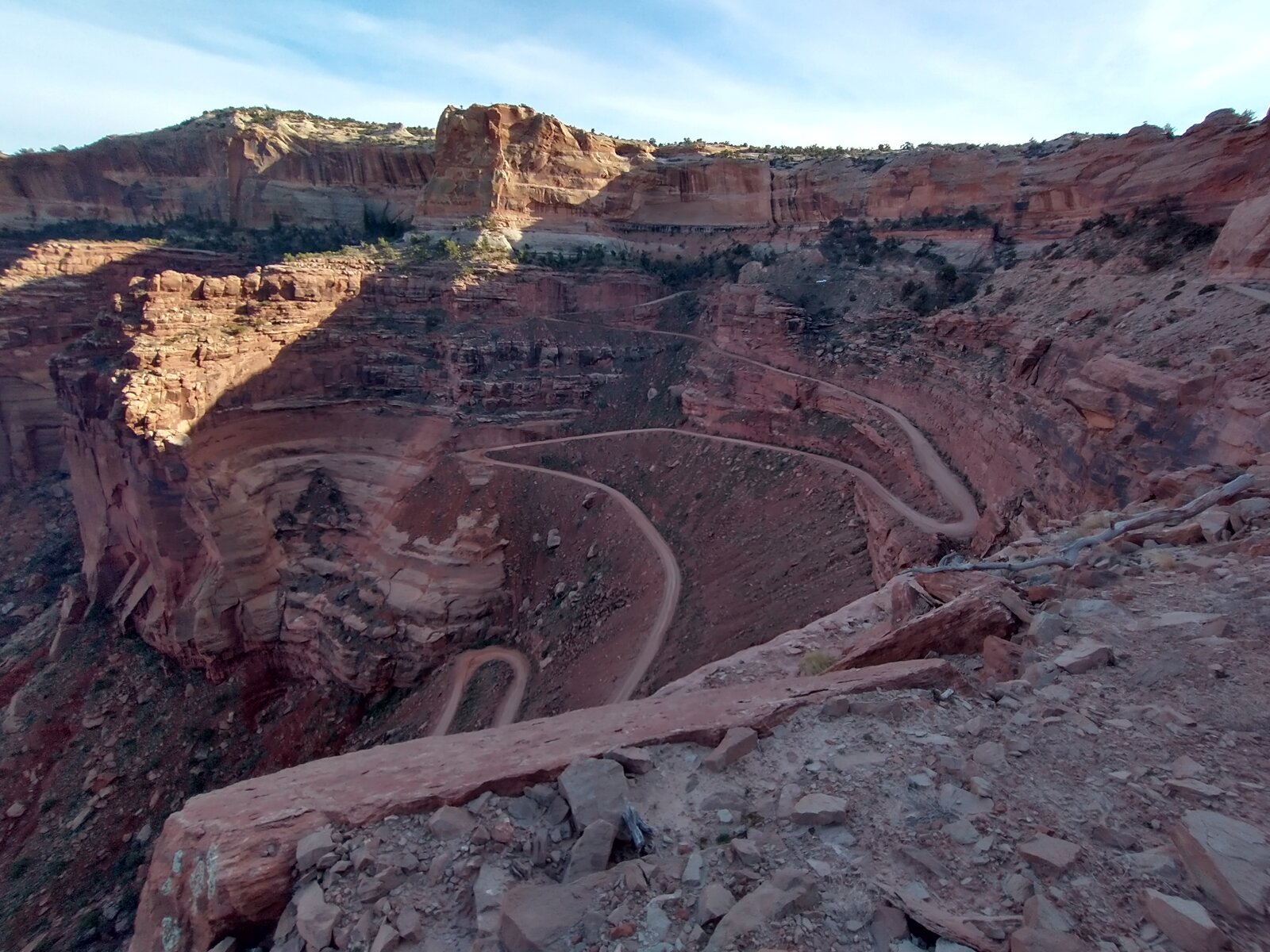 For someone planning a trip, I highly recommend "4WD Adventures Utah," by Peter Massey and Jeanne Wilson. There is one on E-bay for $40 shipped. It covers most of Utah. If anyone wants a smaller book that covers the Moab region from I-70 south to the Arizona border and from the Colorado/Utah border west to the Green River, I have one that's free for picking up half way between your house and mine in Bryan, Tx. I'll ride up to 100 miles. It's actually the same trails that are in the larger book and just excerpts from their larger book. A few pages are loose, but it's all there. Their books have scenic ratings, difficulty ratings, remoteness ratings, mileage, driving time as well as a description of the trail that includes sights to be sure to see. Ride Texas has first choice.
Last edited: Saturday at 11:56 PM 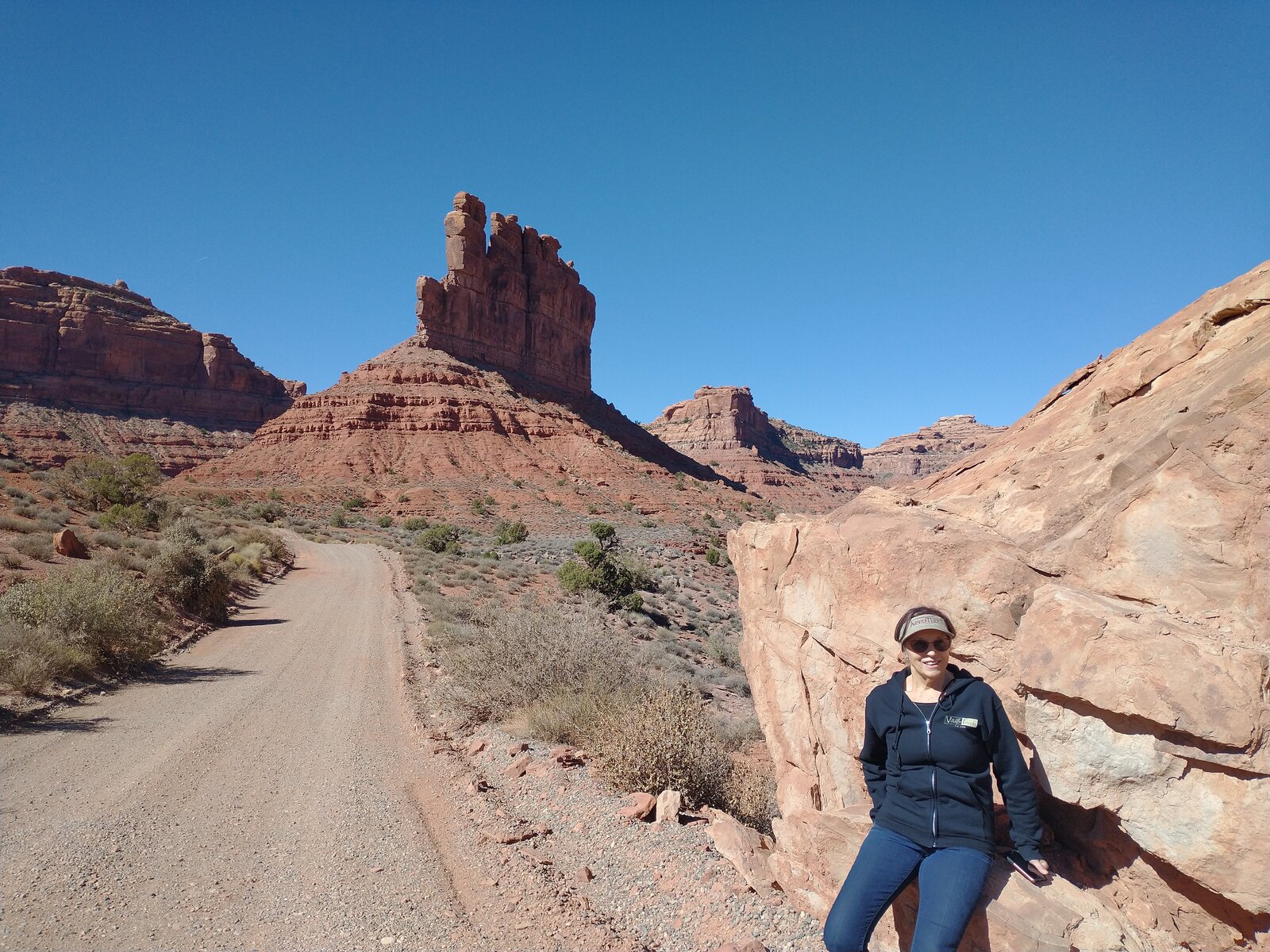 Gooseneck State Park ($2 entry fee for motorcycles). Muley Point gives a view of the Goosenecks from much higher up on the canyon rim. 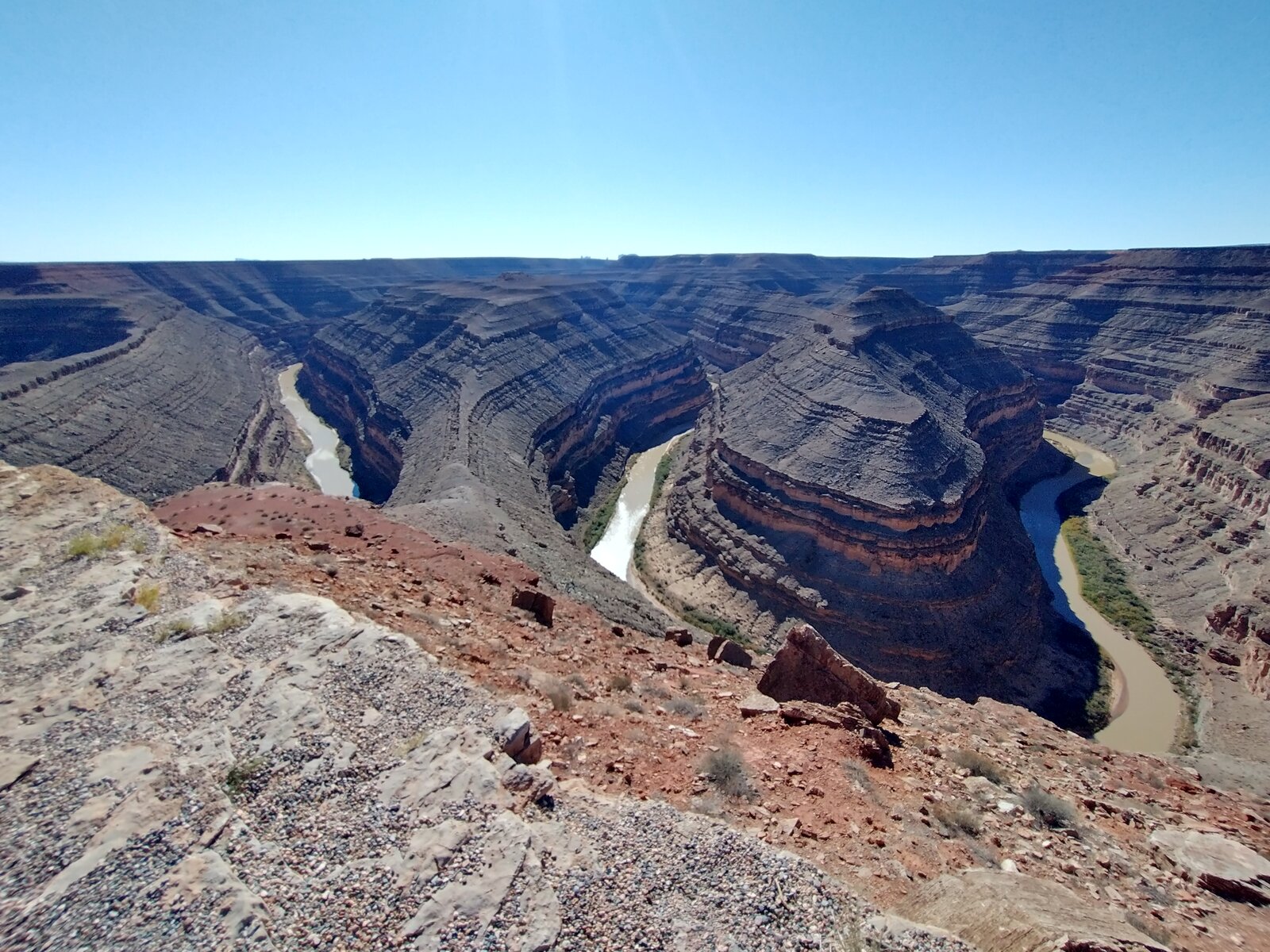 Wife and I did the White Rim Trail in a day back in 2015. She was on a CRF250L and me on a XR650R. Some of you on here could easily tackle it on an 800cc or 900cc adventure bike. The deep sand portions are the toughest IMO. Beautiful area! 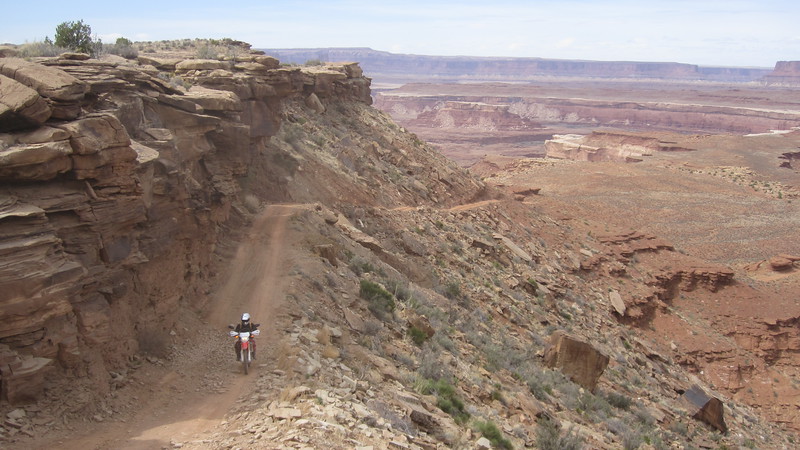