You all have a great time. Keep the rubber side down. Looking forward to following this ride. It needs to happen a week later next year.

texaspatrick said:
I was in from page 1, but I managed to get audited this year and I won't be getting my tax return for another six weeks. I found out it was happening in February, but I couldn't expedite the process at all. Don't count your chickens before they hatch, I guess...
More than bummed. Got the bike prepped, passport worked out, dog sitter and got the time off work.
I'll be following along. Can't wait to see the photos!
Click to expand...

it's not that expensive bud, just anticipate $100 a day at most worst case scenario, but u will probably spend $40-50. Just ask someone for a quick loan, u will not regret this ride, it's a lifetime of memories, when u get back, u will be reenergized so much u will want to work overtime etc so ur loan will be paid fast. It's worth it.
8

Yes! Another Tenere rider. Hope to see more Teneres at the border especially since the 2 guys i was supposed to ride with will not be able to attend. Get well soon C4nuck.

The rally t-shirts have arrived.

Stop by my room Friday evening and get your rally t-shirt. (I'm staying at the rally hotel - the Clarion Inn, formerly the Studio 6.)

I also ordered special rally stickers for anyone who wants one. $1 each.

Rich gave away half of them already to the ladies working at the Pink Pony in Houston this past weekend
Click to expand...

Then I hope they were iddy-biddy stickers.

Here is the sticker. It is 2 x 4 inches, printed on vinyl material. The printer says the sticker is waterproof/fadeproof for 2 years. 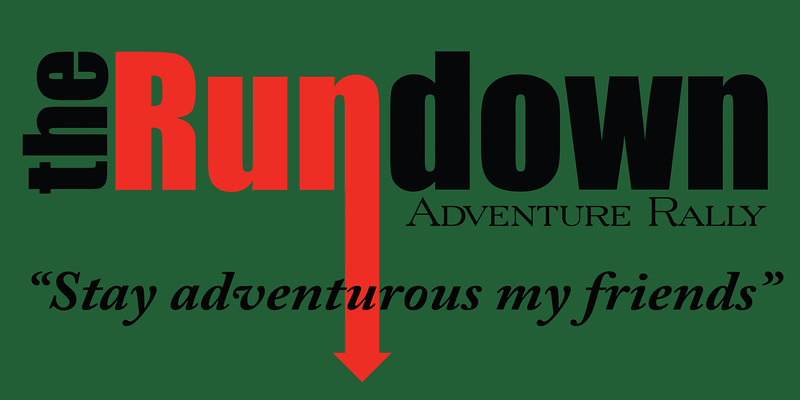 Last Shoutout for Monday ride down

I will be attending the MotoGP and then crossing the border on Monday morning. I am on a XR650L and will be taking the route to TULA, stay the night and then to Jalpan.
8

The rally t-shirts have arrived.

Stop by my room Friday evening and get your rally t-shirt. (I'm staying at the rally hotel - the Clarion Inn, formerly the Studio 6.)

I also ordered special rally stickers for anyone who wants one. $1 each.
Click to expand...

Which one is your room?

88millimeter said:
Which one is your room?
Click to expand...

The one with a sticker on the door

tricepilot said:
The one with a sticker on the door
Click to expand...

Wrapped up my bike prep for the rundown 4 days early, a new record for me. First long trip on a sportbike since my first Big Bend Uncles, maybe 2010. Hopefully I haven't gotten too old in 6 years to be comfortable.

We will be the odd men out on this trip, CBR1000RR and Yamaha R6 on street tires. For anyone wanting to run down with us on pavement only, we will be brisk, but safe and sane, with lots of stopping to take in the glory of old mexico. Only real goal for the trip down is to watch MotoGP in a mexican bar, maybe in Xilitla, on Sunday at 2PM.

We'll break off later in the week to head over to Guanajuato with Fang for 3-4 days, then come back by way of Zacatecas and Monterrey (nearby rock climbing town of Hidalgo, actually, a suggestion of Zeke's aka Kawakayakid). Back on Tuesday we hope.

Who else is leaving the knobbies in Estados Unitos?

Maybe I am overlooking a post, but is there a specific radio frequency most of ya'll will be using?

I also found a conversion chart from FRS/GMRS (the handheld motorola radios) and the actual frequency you'd type into a Baofeng to be able to talk with a guy on a handheld on, say channel 7 = UHF 462.7125 The Baofeng range is 400-520 MHz(Rx/Tx) UHF so it overlaps.

The Family Radio Service (FRS) is an improved walkie-talkie radio system authorized in the United States since 1996. This personal radio service uses channelized frequencies around 462 and 467 MHz in the ultra high frequency (UHF) band. It does not suffer the interference effects found on citizens' band (CB) at 27 MHz, or the 49 MHz band also used by cordless telephones, toys, and baby monitors. FRS uses frequency modulation (FM) instead of amplitude modulation (AM). Since the UHF band has different radio propagation characteristics, short-range use of FRS may be more predictable than the more powerful license-free radios operating in the HF CB band.

Which Baofeng did you buy? I have a bunch of 888s radios that work great for gmrs/frs, even though they are not really legal, especially at 4w.

Shadman said:
Maybe I am overlooking a post, but is there a specific radio frequency most of ya'll will be using?
Click to expand...


JT is in charge of communications stuff. He does have a radio frequency designated for us to use but I don't know what it is.

If he doesn't post the answer please help me remember to discuss it during the riders meeting on Saturday morning.

Hey Pete - I'm on my GS but plan on riding pavement on the way there. Happy to tag along.

Our "traditional" GMRS frequency to date has been GMRS CH 7 or 462.7125 if you punch it in yourself

BUT there is nothing that says individual groups electing to use their own GMRS channel selection. This is why I have a copy of that chart with me. Casual readers should print it and bring it if they're going to be using radios.

I would love to find a place to watch motogp on sunday too.

Just a note that might help someone....I have AT&T cell service and they have a Mexico plan that is no cost that they can add to your account. It is unlimited calling and texting to the U. S. and withing Mexico as well. They will bill you if you go over 1G of data however.

I called back twice to talk to different people just to make sure as it sounded too good to be true.

Vinny said:
I would love to find a place to watch motogp on sunday too.
Click to expand...