I can't say I've ever shot in one of those tunnels which go under a road until yesterday although I've seen many shots done in them. They are gritty and provide an interesting perspective of walls/ceiling and floor with some lighting challenges unique to front light, subject light and back light.

My buddy Eric asked if I'd help him with getting a shoot done for his friend Joey. Not wanting to turn down an opportunity to try something new, I said "Sure"! Upon arrival at this one, Eric migrated to about the middle, stopped and asked "can we light this with the speedlights"? Hmmm.... So I asked Joey to stand there under one of the interior lights, dialed in ISO400, about 1/200th and f/2.8 and got an almost perfect natural light shot in there. So yeah - speedlights should be no problem to light this the way he wants.

Joey has been at this lifting business for about 15 years. He's what's called a "Silent Lifter" which means he doesn't compete. He just does it for himself which I found to be pretty cool. There's a whole sub-culture of "silent lifters" out there.

Anywho.... Eric got him placed in the center and asked about lighting. He only brought a single 2x3 gridded softbox with a speedlight, so I decided we'd set it up for some 45 degree side lighting which would provide good light on one side and wrap around a bit and provide some shadows on the short side. First shots were tests to get the ambient light right of the light at the end of the tunnel (i really wanted to say that pun at some point), and then we brought in the flash to pop Joey as needed. Here's a couple of the first series. 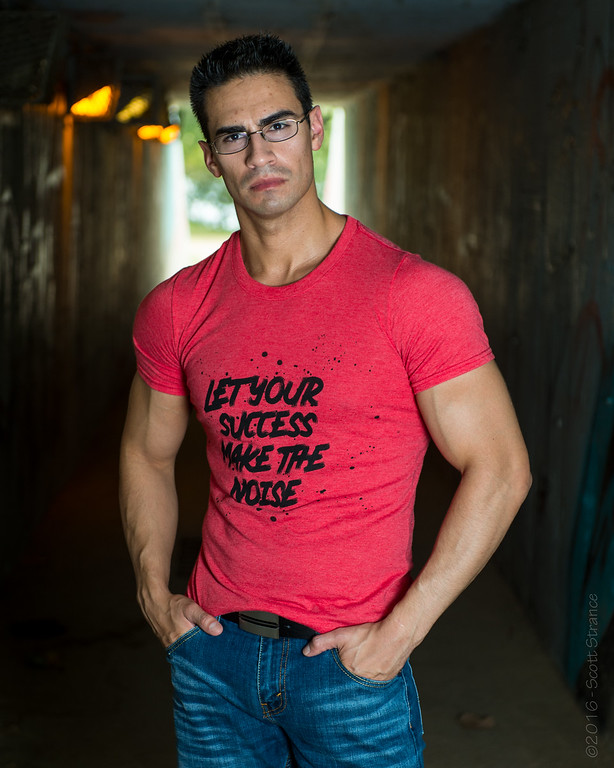 The glasses were a trick to work around for softbox reflection, but we just played with the softbox lighting direction and camera height. We also concluded Joey looks better with a smile for most of the shots but when the 'guns are up', serious was also good. 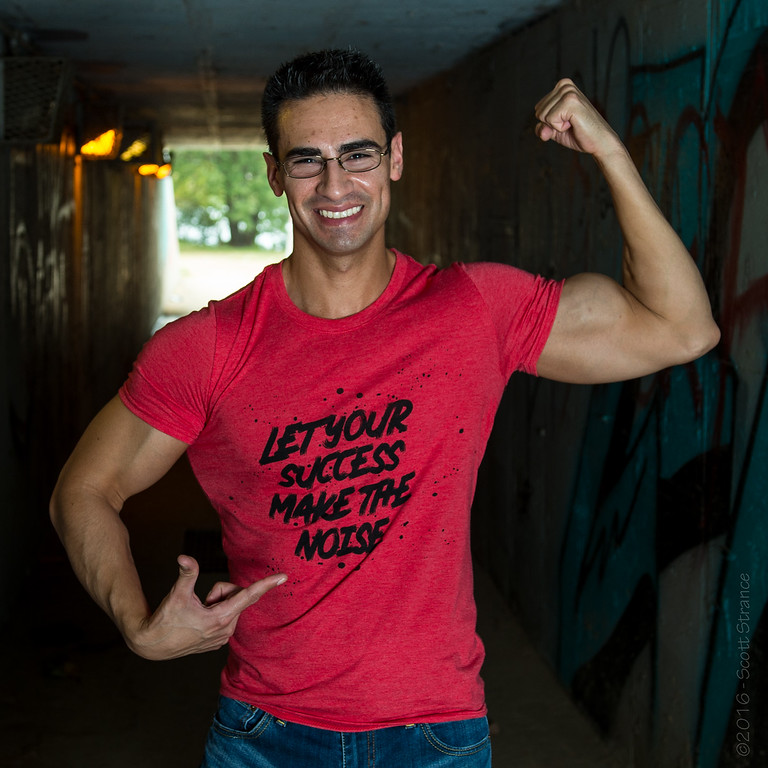 Eric was also shooting some product shots for a friend who makes shirts. So we went through some wardrobe changes while at it. We played around with angles to highlight Joey and also emphasize the tunnel environment. 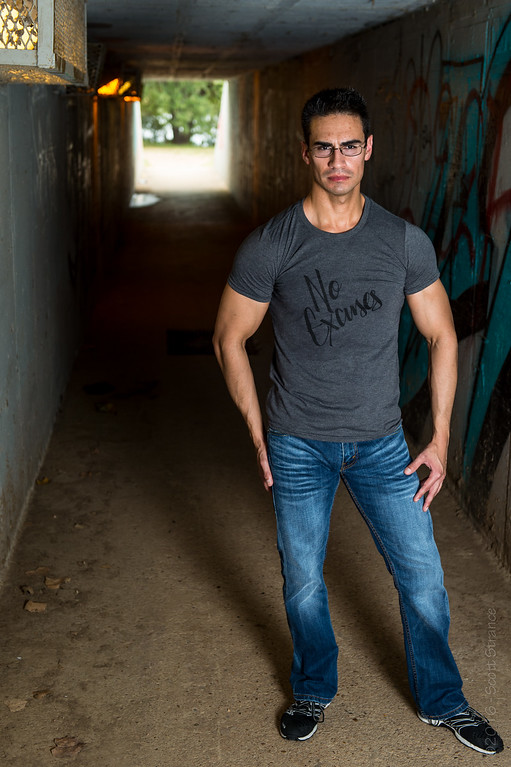 During one of the changes, I asked Joey to walk to the open end and did a natural light shot exposing for the ambient and no flash on him for this one. 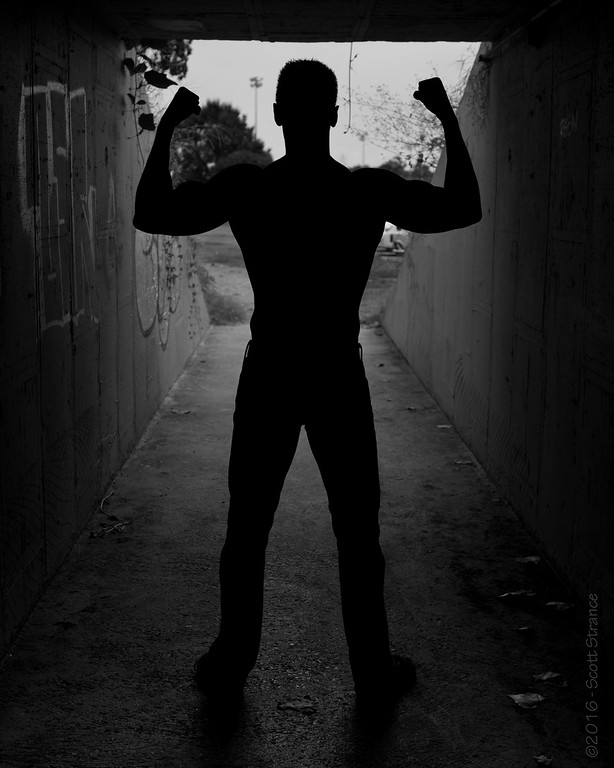 Then it was time for a different look.... 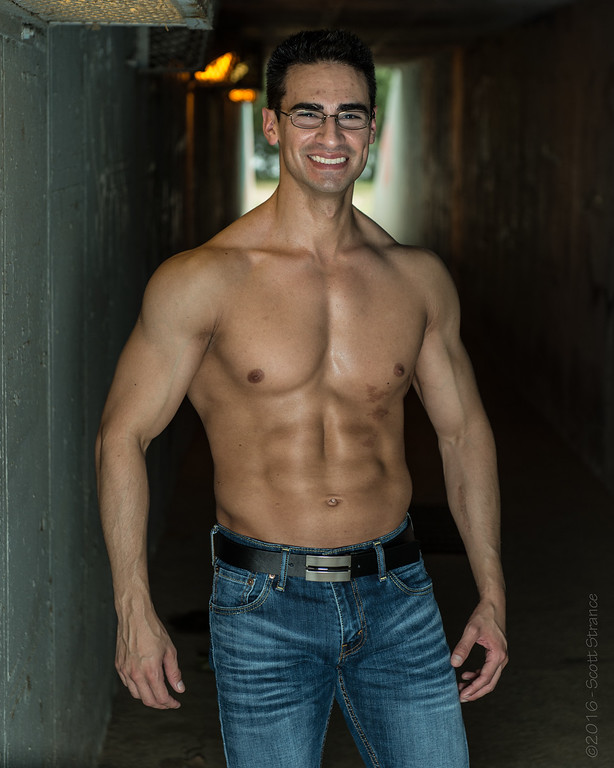 This gives you an idea of what we were working with... 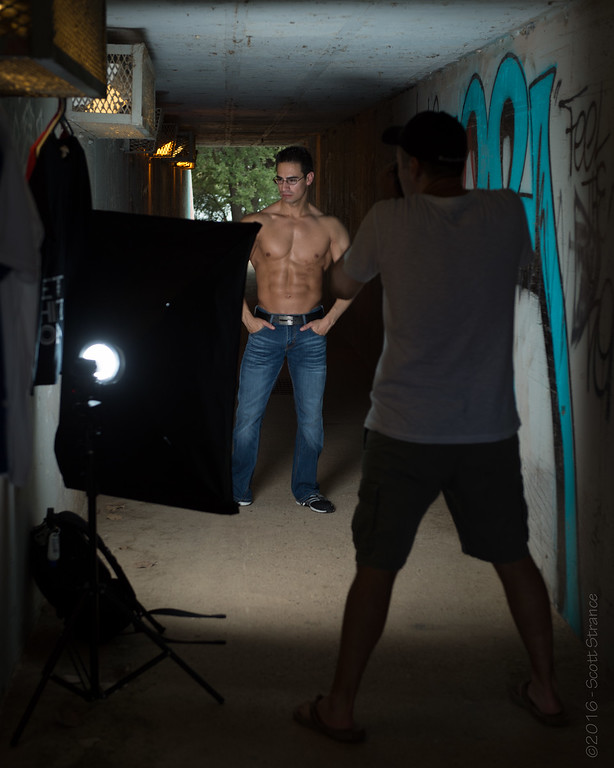 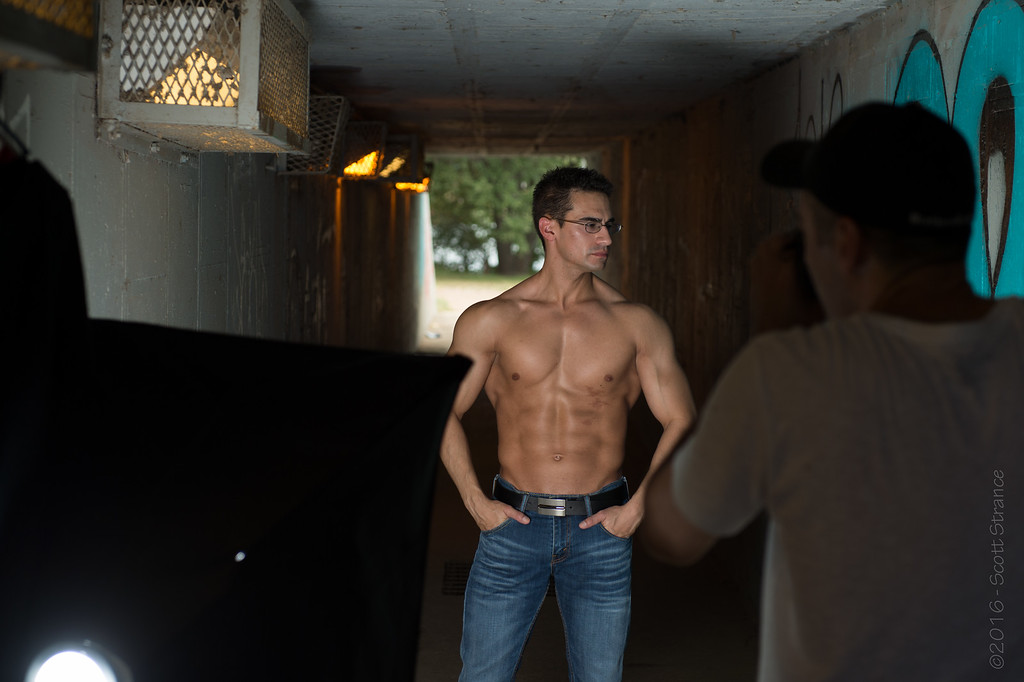 I asked Eric if we could destroy one shirt and he asked "but why"? Well, for this look. Also, note how the end of the tunnel got really dark? The skies were about to open up on us but we were safe inside the tunnel and dry. 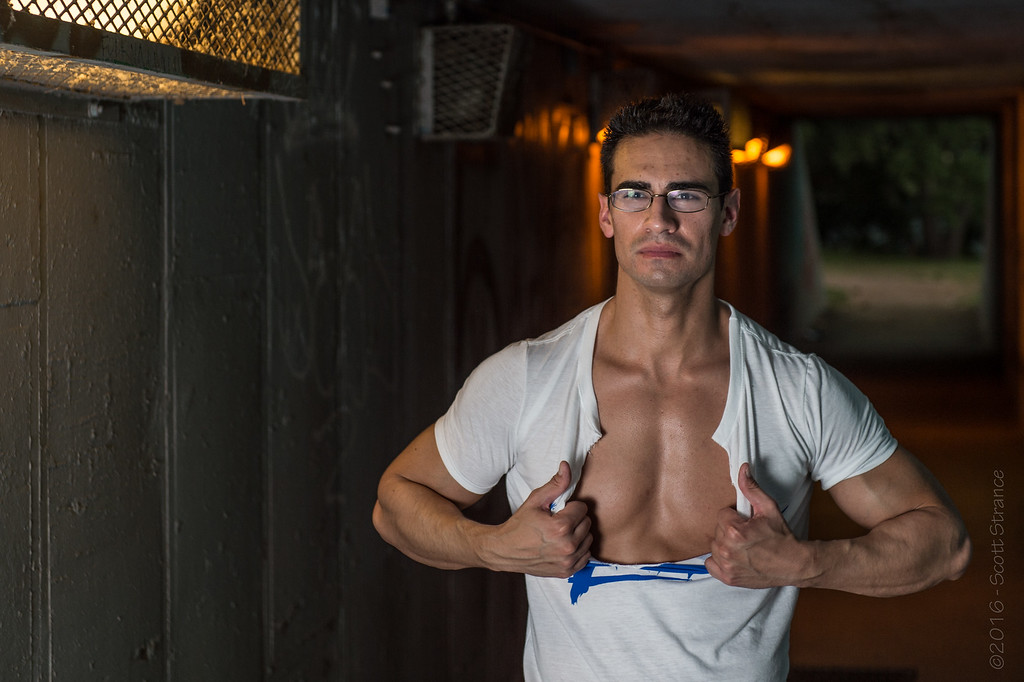 Next up was a splash of water. I didn't bring any glycerin to spray him with (glycerin and water in a spray bottle gives super awesome water droplets that don't run and they stay in place) Also, more angled shooting to give a gritty feel with the open end in the background 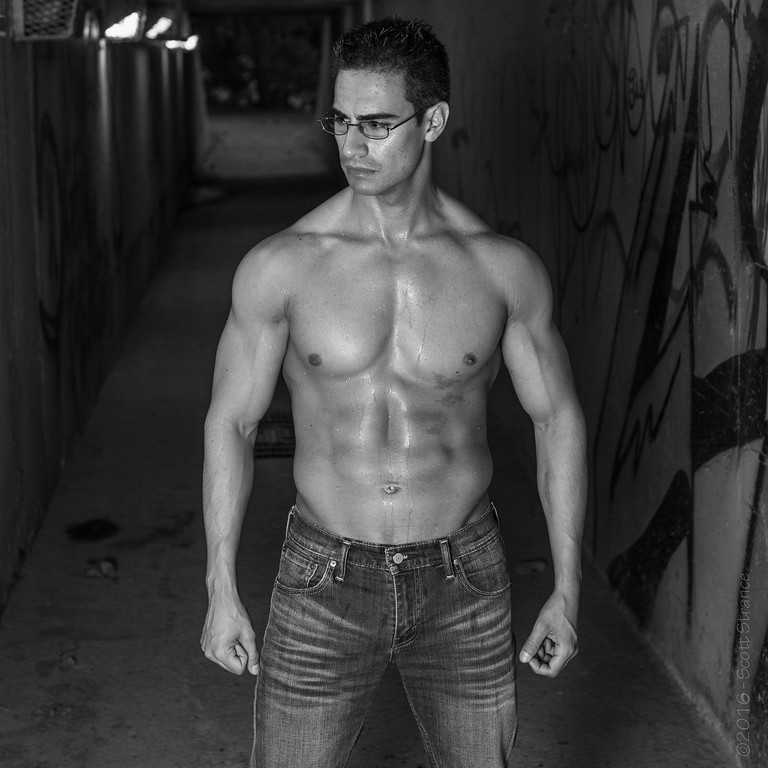 The last series was done just as the storm was rolling past us which provided for some dramatic lighting in the background. Here's a single softbox shot 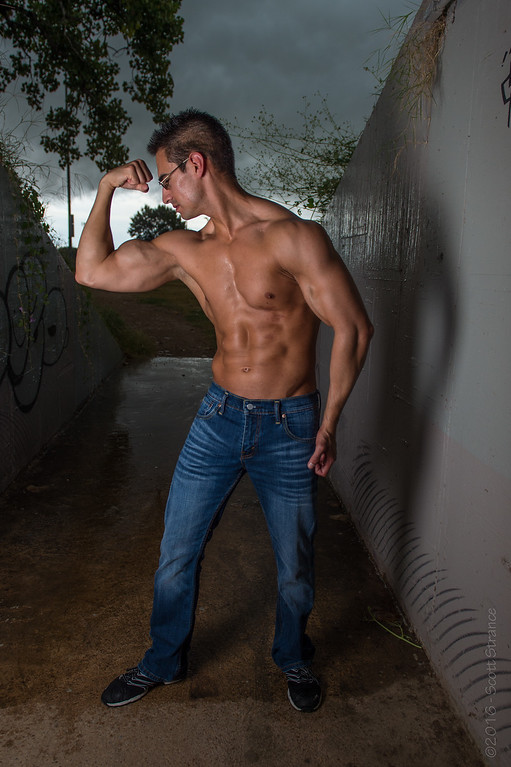 Overall Eric and Joey had a good time and I enjoyed the 'setting up' of how this would come together with what gear Eric provided. The learning exercise reinforced the adage "expose for ambient and flash your subject" and worked in this environment. Joey liked the end product, the shirt manufacturer liked the end product, Eric learned new stuff, and I found a new place/environment to shoot so this was a good day indeed.

After we were done shooting, Eric and I wandered over to Flat Track Coffee on the East side of Austin to de-brief on the shoot. While there I couldn't resist trying another gravity shot. 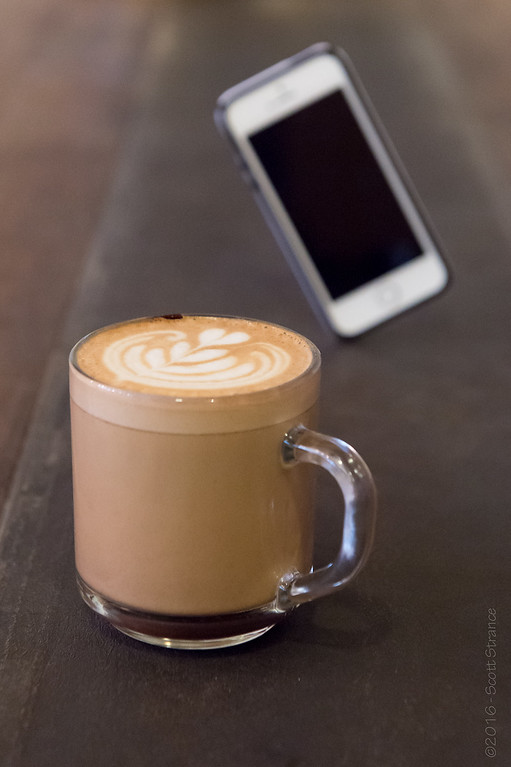 Nice lighting on these! Enjoyed the write-up and series... well, I guess as much as I could have enjoyed looking at a many with his shirt off.

Thanks, Kory.... A fun shoot indeed as I'm always learning new stuff which is cool.

I think I want to get a stunt biker in there next and have him bounce off a side wall for a shot.

I think I want to get a stunt biker in there next and have him bounce off a side wall for a shot.
Click to expand...

That would be awesome!