Wanna ride for a hot dog?

Wanna ride a long way to eat a hot dog?

My friend Alex will be coming from Tennesee, so don't whine about how far it is from Texas.

Just let Dean know you're coming. See his contact info at the bottom.

The 2021 Long Distance motorcycle riding season is coming to a chilly close. And goodness, some of us West Coast riders are even crankin’ up our heated gear in these low 60 degree F evenings with a wind chill of 30 (at least that’s what it feels like to us SoCal rider's).

It’s been a very tough 2 years since COVID-19 reared its ugly head! Most regional LD and multi-day rallies were cancelled. Individual rides such as Saddle Sores, Bun Burners, BBGs, 50CCs, 100CCCs, UCC, B2Bs, 48++ and any combination of Extreme rides continued and this year we saw the Iron Butt Rally contested! It’s time to have a little non-competitive fun!!


Bite the Wieenie is not a membership based event. It is open to riders of all idiosyncrasies. (you don't need to be an IBA member to join us... just bring your appetite)

Make this a major motorcycle weekend by attending the IMS Outdoor Show followed by Bite the Wieenie. I encourage all riders on the West Coast and beyond to attend the Progressive International Motorcycle Show Outdoors, Southern California event Saturday then after it closes, ride ~20 miles to Pink's Hot Dogs to BITE THE WIEENIE!


Pinks Hot Dog
Pink's is an honest-to-goodness Hollywood icon, sub-cultural gathering spot and past IBR bonus location. The establishment now knows we are coming! Whether you're a twerking Mike Kneebone, a demu Lisa Landry, Kim, Khloe, Kourtney or Elvis, everyone waits in line. And the 1-hour+ wait at midnight for a $3.45* chili dog is a unique Hollywood experience.

Jacked up pickups, bouncing lowriders, Porsches, pimpmobiles, junkers and LD motorcycle rigs all share a miniscule parking lot while stretch limos and Hummers circle the block while their contents wait in the 1-hour+ line.

Besides us LDRiders with ATGATT, it would not be unusual to see unique body piercing, facial tattoos, the best body modifications that money can buy, spikes and dreadlocks, prom dresses, grunge street wear and barefoot surfers standing in line.

WHY MIDNIGHT???
1. Because that's when the beautiful people appear and ohhhh are we sooooo beautiful!!!
2. Even on a Saturday between 4 and 8 PM LA freeways are parking lots!! Riding into Pink’s between 9-10 PM just might avoid Car-ma-geddon!
3. And it's a perfect Saddlesore Ride (1,000 miles in 24-hours) for WA, ID, MT, WY, SD, CO, OK, NM, TX. Leave before midnight Friday evening, arrive at Pink's within 24-hours later to get your witness signatures. There will be dozens of witnesses on hand.

Send me a text if you're coming. It’s helpful if I can give Pinks a reasonable guesstimation.
Dean Tanji
Chief Hooligan and "Bite The Wieeenie" Grand Poo Baah
dtanji at gmail.com

My first experience in 2010 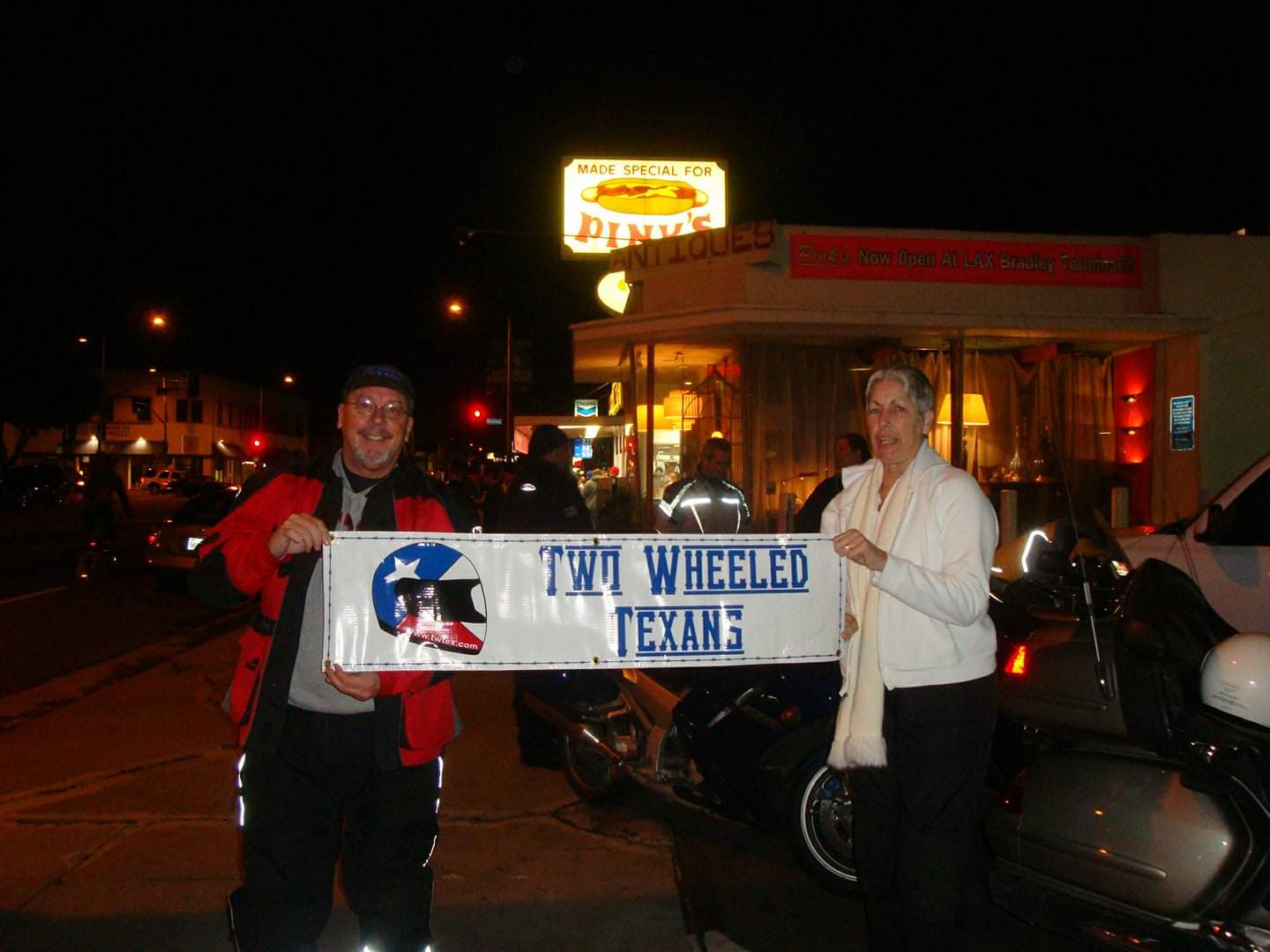 Random parking lot shots from over the years. See the building across the street with the Prime Retail sign? That is the former Frederick's Of Hollywood store. If you don't know what that is, you're certainly not in my age group. I can see at least one Texas flag on a windshield in this photo. 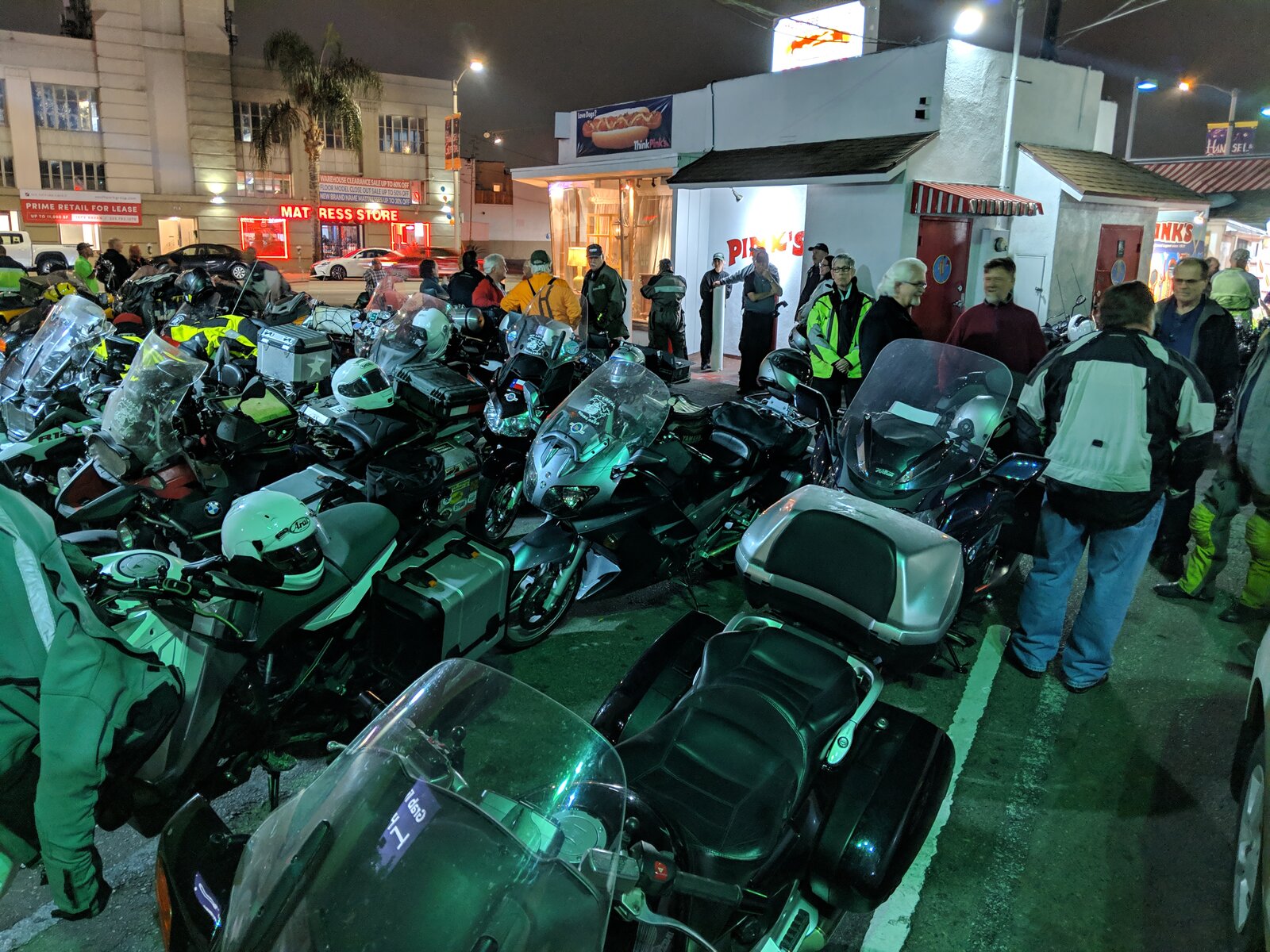 There's at least three Texas-related bikes in this photo. 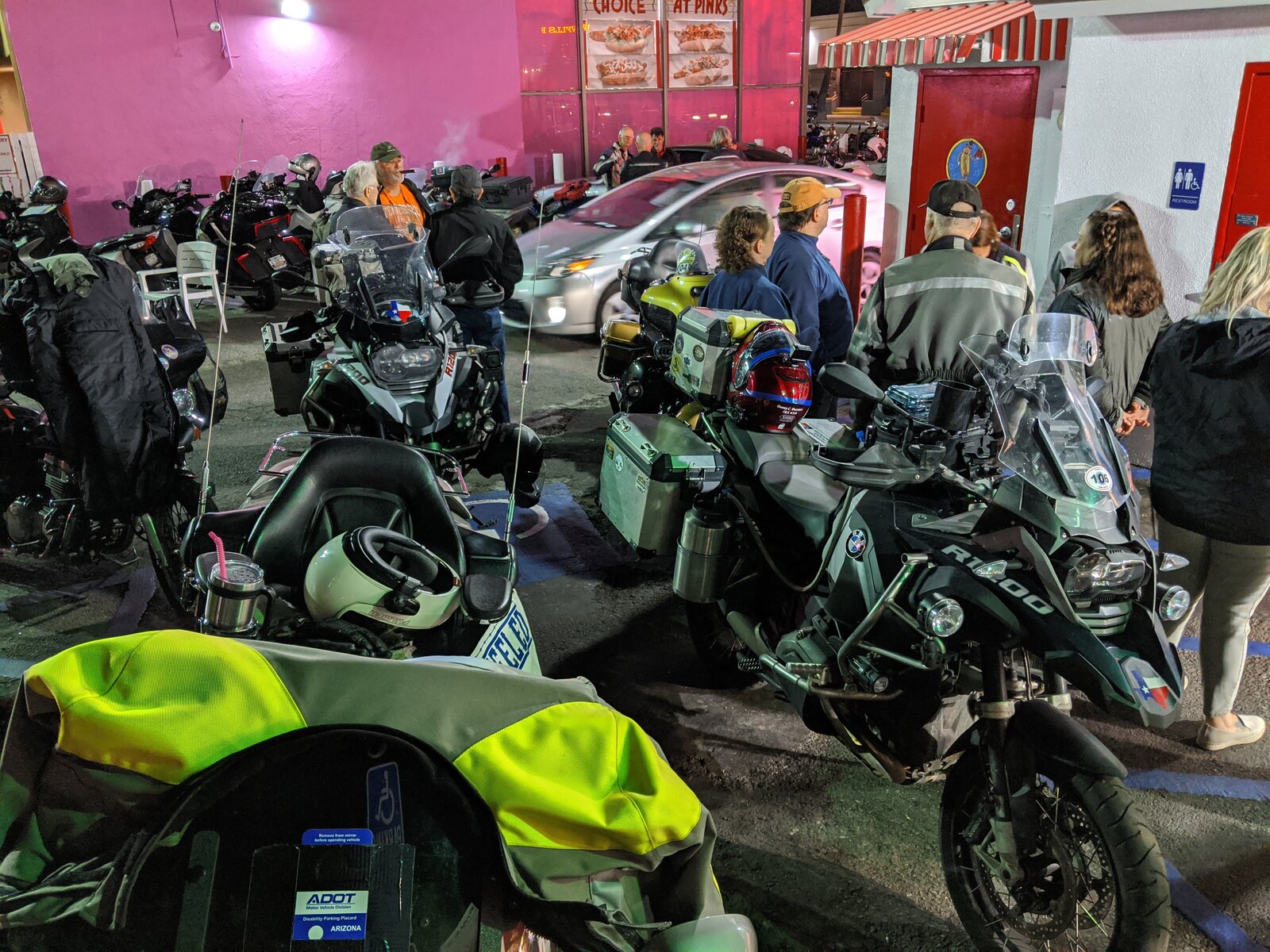 Left to right... the HD belongs to Jason Jenkins out of Las Vegas (he and I will probably be riding the Kactus Kilo out of Kingman in April), the Concours belongs to Alex Schmidt who did the first "International SaddleSore" from Mexico (others have attended from Canada in the past) to attend, and he's the one that will be coming from TN this year. My Wing next to that, and to the right of me is Danny Dossman and Tim Masterson, both out of Texas. They were also flagged in the Senior Butt / Junior Butt Rally photos I posted last week. Tim had just come in from the east coast, riding I-40 from start to finish, and then coming down to Hollywood when he was done. Both Tim and Danny are IBR Finishers.

Some of the low calorie, low carb foods available to you. 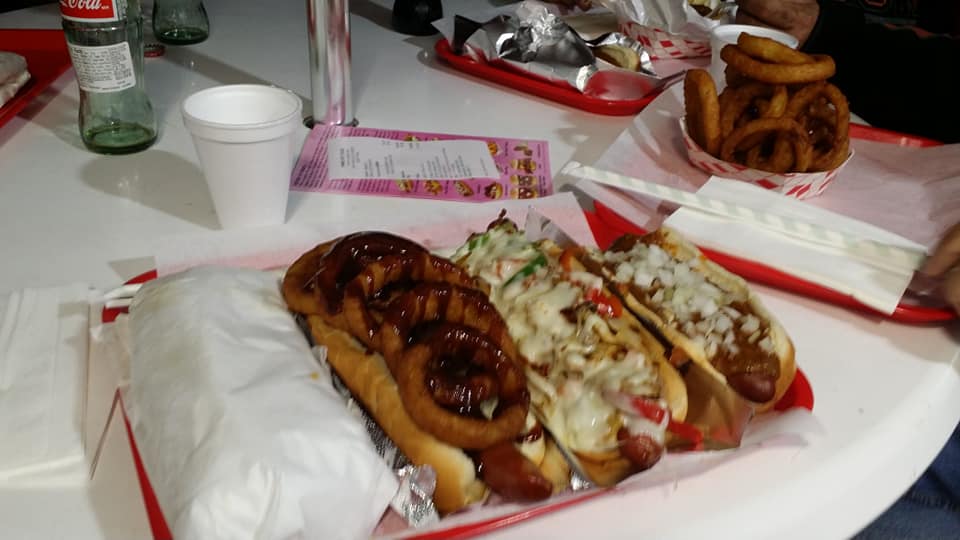 My friend Mark out of Calif (easy ride for him), and Alex who came out of Mexico and was hungry. 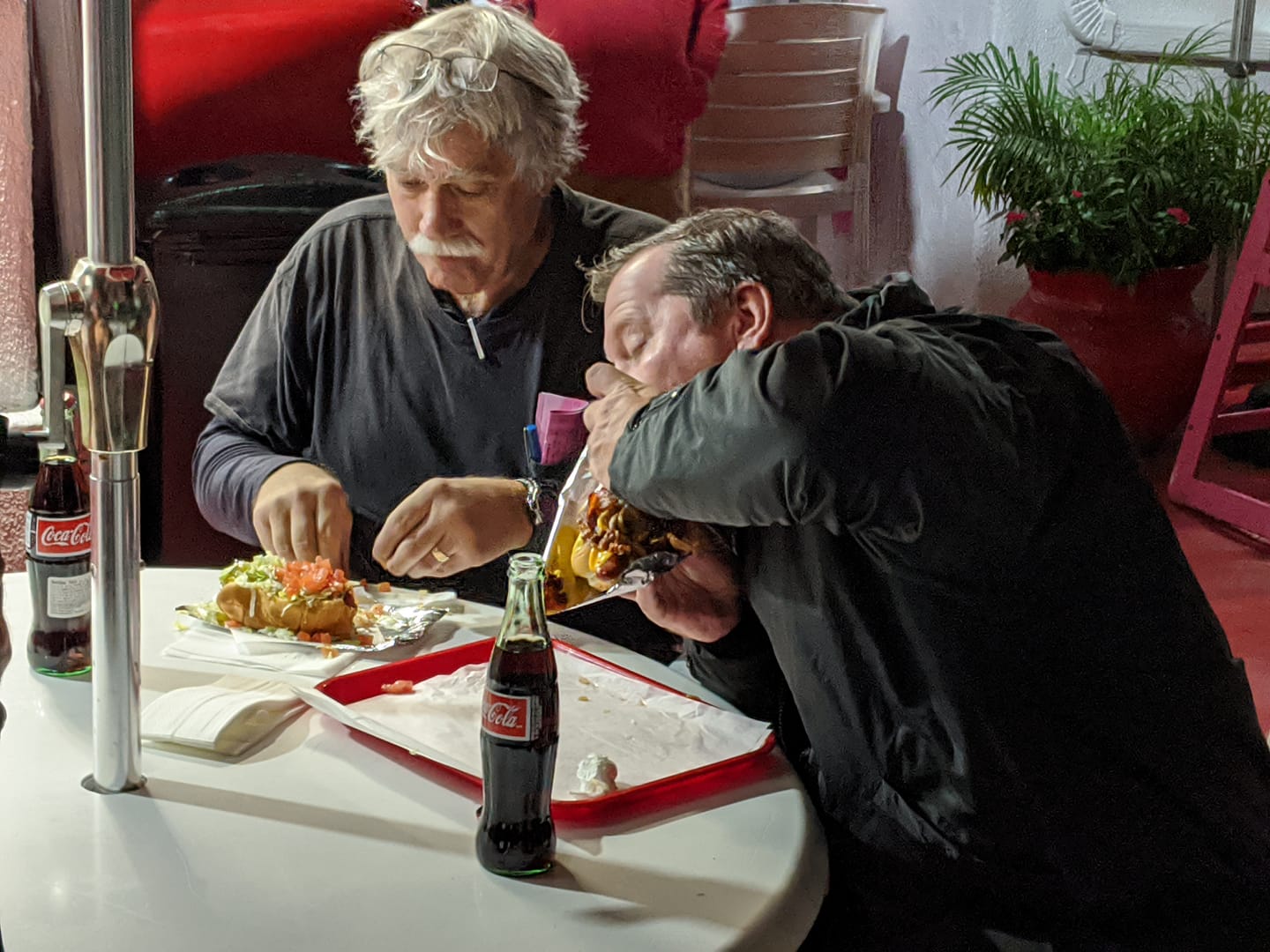 Don't fret. If you don't like sitting outside they have an indoor eating area that will hold about twenty people. The interior also has all the signed celebrity photos from over the years, and like Dean said, no matter who you are you stand in line like everyone else. It can be chilly, so be prepared. It has also rained about 1/3 of times I've been there. L.A. traffic on a Saturday night at 7-8 pm in the rain is NOT fun. Be prepared. The 101 north from I-10 is old and narrow. You can lane split, but when you're two-up on a Wing, it's dicey. I try to wait until another rider passes me and then I follow in his wake. 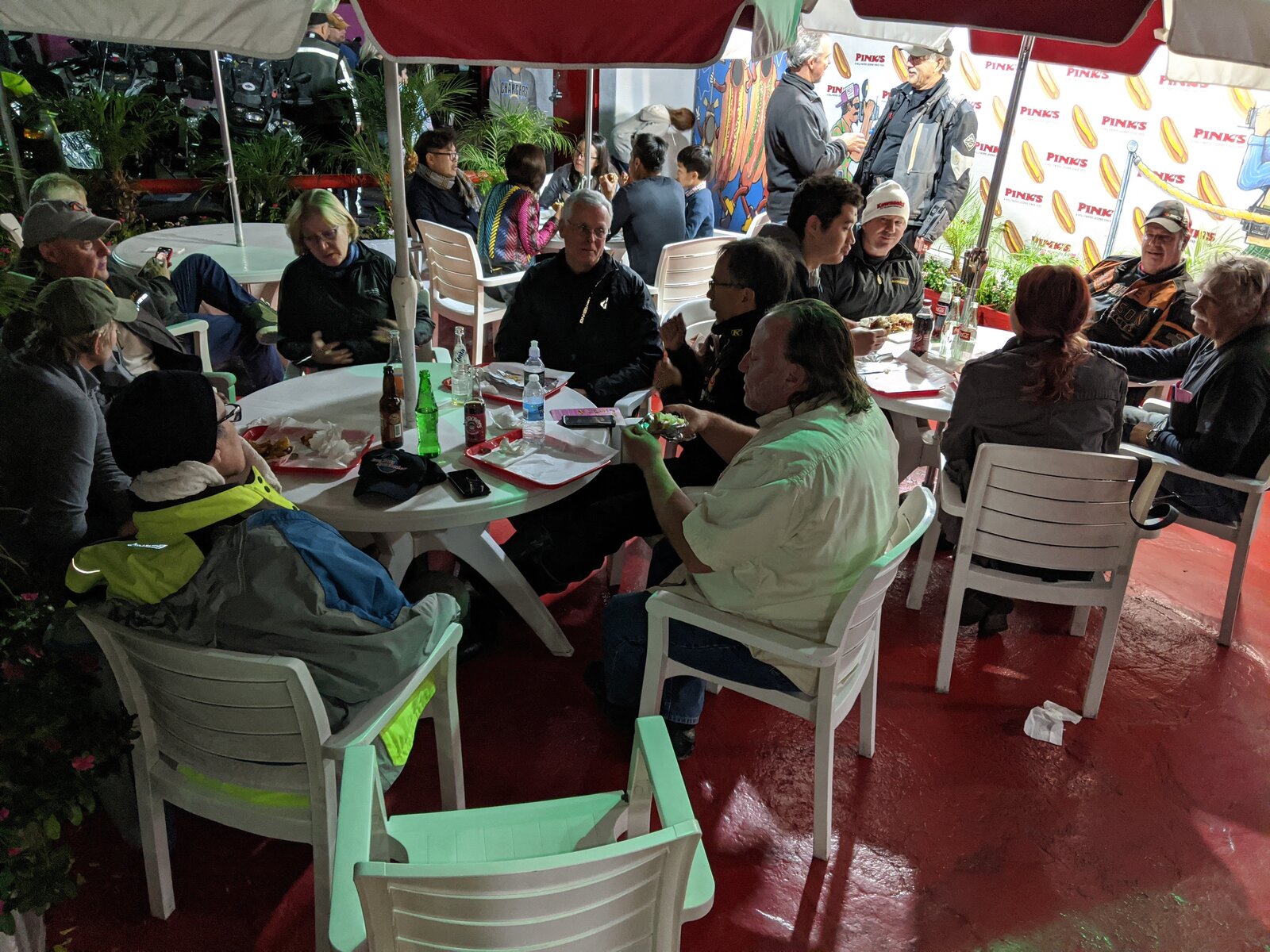 With Gloria Pink, the daughter of the founder. The hot dog that she's holding is her cell phone case. 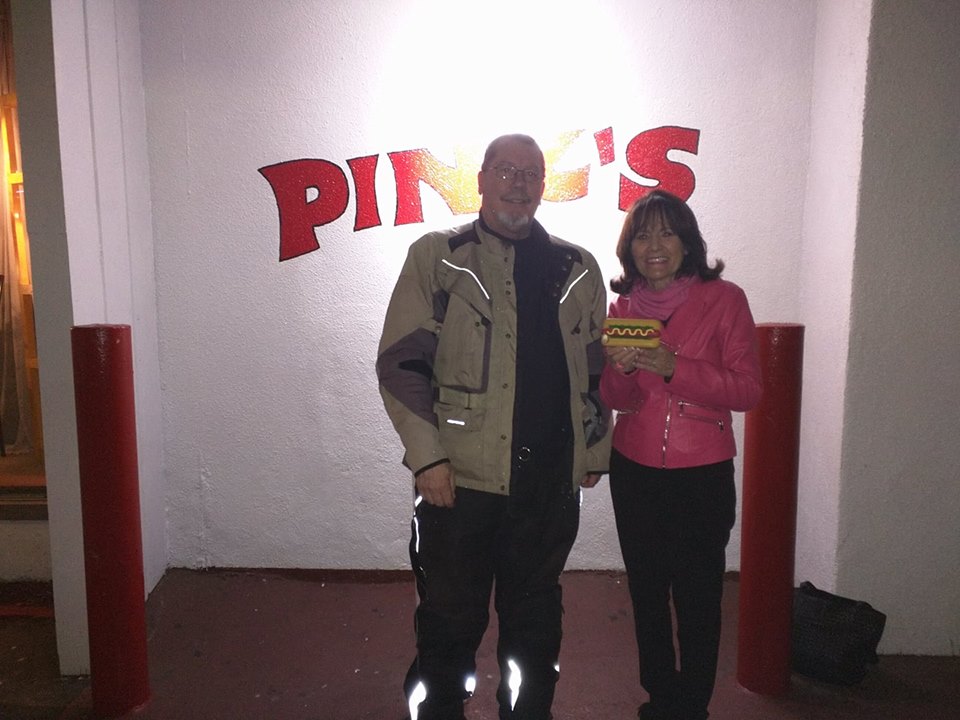 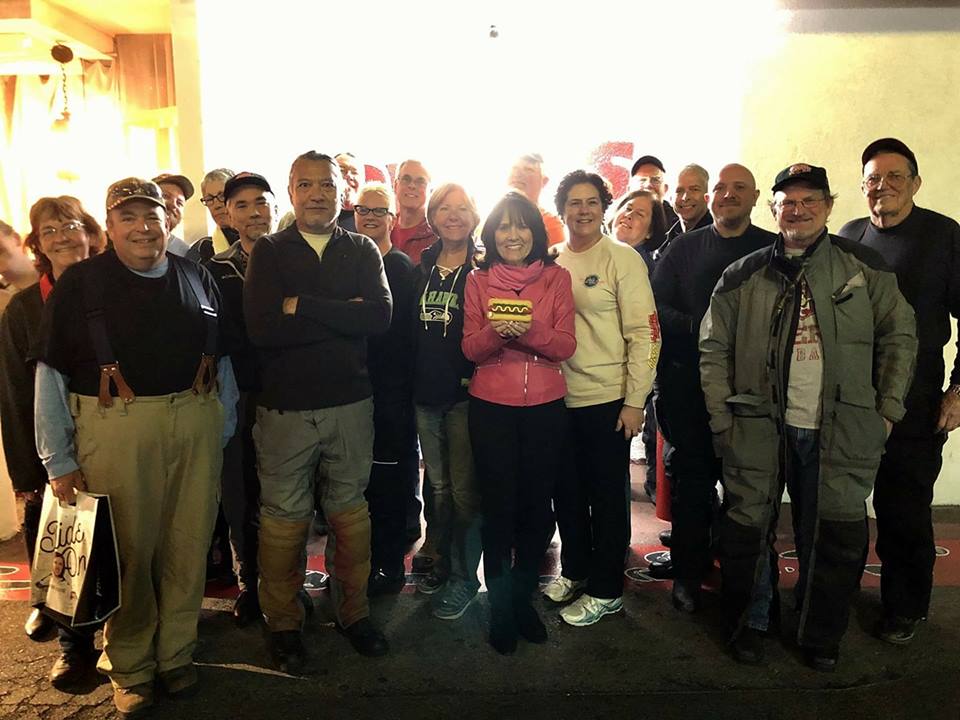 And none other than the Grand Poo Baah himself, Dean Tanji holding a plate of dogs that Gloria sent out to us after she had left. 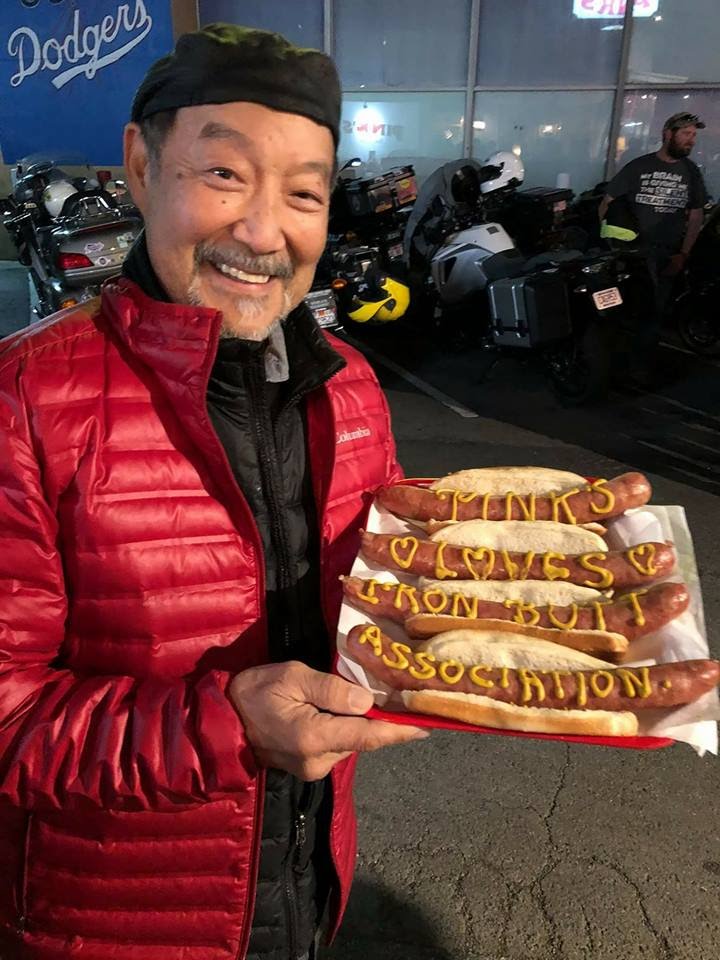 So come and join us. You'll eat at a real historic place and have the opportunity to swap lies with some of the most hard core LD riders in the nation. It's not uncommon to run into some Iron Butt Rally winners there; and numerous finishers.

Reminder. It's this Saturday night.

I'll leave home about 2 pm to head over, and then leave 12 - 1 am and head back home. No SaddleSore planned but I'll keep track of my receipts in case I get a wild hair and decide to tack on another 200 miles when I get home.

I have two friends coming from the east coast; they will be doing an I-40 End to End ride and then coming down to Pink's when they get to the western end of I-40. That will add another 125 miles to the I-40 ride, plus the 650 miles from Murfreesboro TN to get to the eastern end of I-40 for the start of the E2E ride.

The two friends are eating hot dogs in one of the previous photos. One will be on a Kawasaki Concours and the other is on the Exxon Valdez... an old Blackbird with 11 gallons onboard.

My friend Alex is approaching the end of an Eggsanity Gold (SaddleSore with 4 Waffle House type locations) and then he'll be leaving in the morning to head to Pink's via the I-40 End to End ride.

My friends Mark and Alex completed their Eggsanity Gold last night and left this morning on their I-40 End 2 End ride. Knowing them, they are probably attempting the Gold version (under 40 hours), which gives them time for some sleep at Mark's house at the end before they ride down to Pink's. 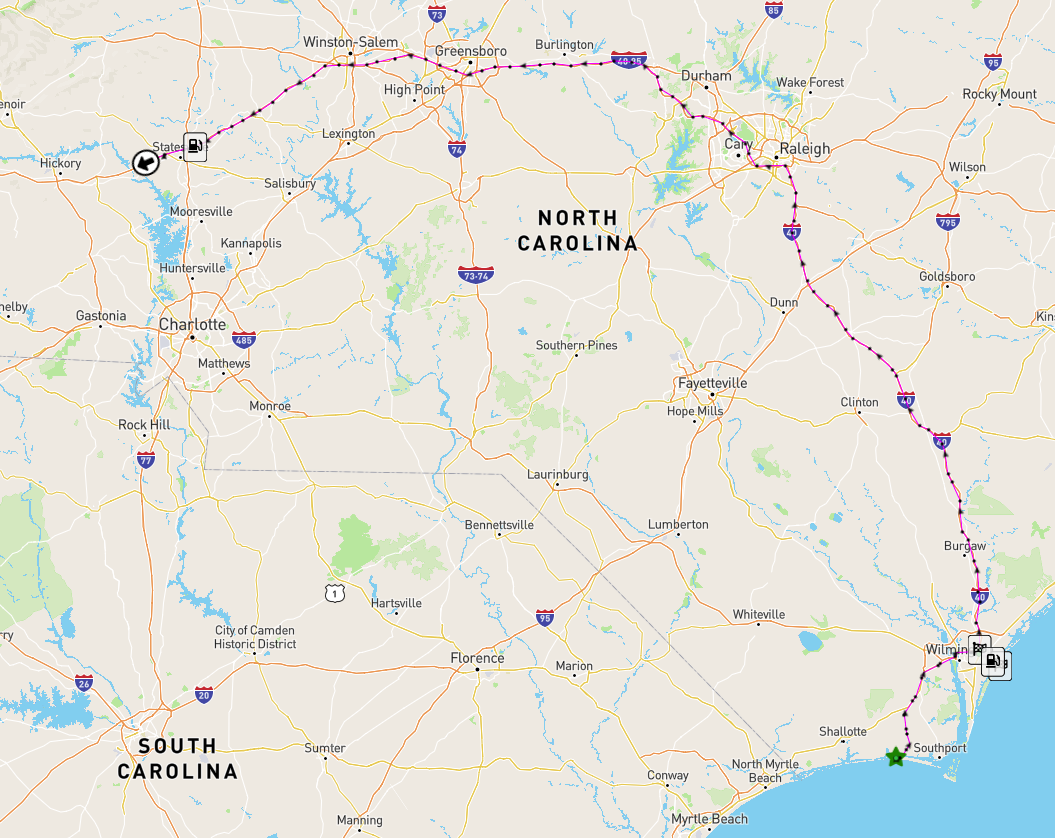 I just saw this. I grew up in Southern California and my life long best friends are still there. I visit a couple of times a year. Too bad I just saw this. I had thought of trying to ride two hundred or so miles and meet up with you then go over to California and get my 1,000 mile day paperwork. After a dog I could go stay at my best friend's house in Whittier. I love the Show Low area but it may be getting real cold by now.

I'm leaving Saturday between 1 - 2 pm from the Chandler area. I live 3 miles off of I-10 so I'll take that north six miles, catch the westbound/northbound portion of the Loop 202, merge back onto I-10 west and ride it until I hit the 101 north in L.A.

If you're coming from ABQ you'd be better off to stick with I-40 all the way in as long as you've got heated gear.

My friends Alex and Mark are on the eastern side of Amarillo. Amarillo to Barstow is 960 miles. They have 15.5 hours left to reach the end of I-40 to achieve Gold status.

Coast to Coast and I40 Insanity

Dean, they will be passing your hood is just a little bit. Blackbird and a Concours. CA and TN plates. Both with aux fuel tanks. 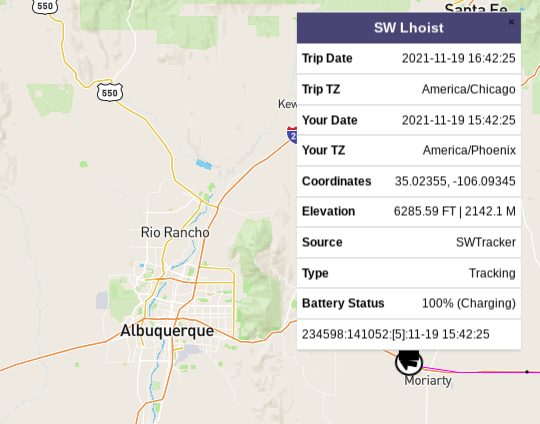 I just saw this. Too bad they don't have time for dinner. 960 miles in 15.5 hours is 62 mph average. No problem but that is stopping only for gas and tending to business for all that time!

I can't make this dog run. I saw your post the other day and I don't have time this go round.

I'm leaving in a couple of hours. Tracker: https://new.spotwalla.com/trip/8553...shusSquZAcubkkcbA3Md5yHEW98trOpjOoJRAVNAhUiZE

I know that Tim Masterson out of Texas is already on his way.