What did you do in the garage today?

JMZ said:
I saved the fun part until the end. $400 plus shipping two ways to have the harness fixed to where it's just plug and play . I think ill give it a try for that. View attachment 280816

That's one of those, if it fixes it ,it will be worth it all day long. GL

That light is the only thing bright in that shop!

StromXTc said:
That's one of those, if it fixes it ,it will be worth it all day long. GL

I agree, well worth the money to avoid that nightmare.

I think you wired the wipers wrong

JMZ said:
I saved the fun part until the end. $400 plus shipping two ways to have the harness fixed to where it's just plug and play . I think ill give it a try for that. View attachment 280816

Is that a temporary test install? That is a load of wires

Just trying to get the wires I need sorted out. I only need map, eot and a tac signal to make the trans shift. Then stuff like coolant, temp , ac , etc. . At least that's what I have read.

JMZ would rather play than pay. 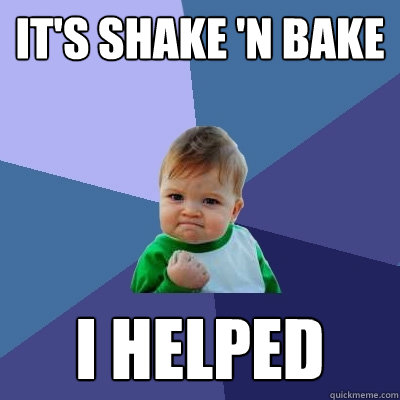 And here is bwdmax in his younger days. 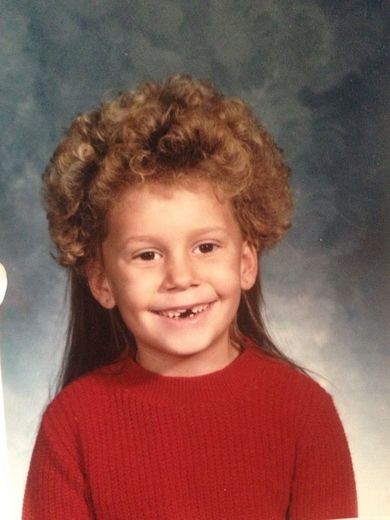 Sent from my SM-G892U using Tapatalk

shovel said:
I think you wired the wipers wrong

Said as she changed the radio station.

JMZ said:
And here is bwdmax in his younger days. View attachment 280829

Ok LOL. Yeah I gotta meet you guys at some point.

Small stuff today. Been finishing up the current DRZ project, waiting on one wire to show up tomorrow and I can wrap that up for now. Today it was time to give the Land Cruiser some attention. 10mm_nut was completely transparent about the non functioning motorized passenger seat when I bought the truck for him. He explained, and I've found, that these things strip their gears out routinely and is a common issue. Common enough that a company called Gamiviti makes replacement gears for them.

First pulled the seat and started taking things apart following the directions in the Gamiviti youtube video. Lots of screwy things to remove but pretty easy, just follow along and stay organized. 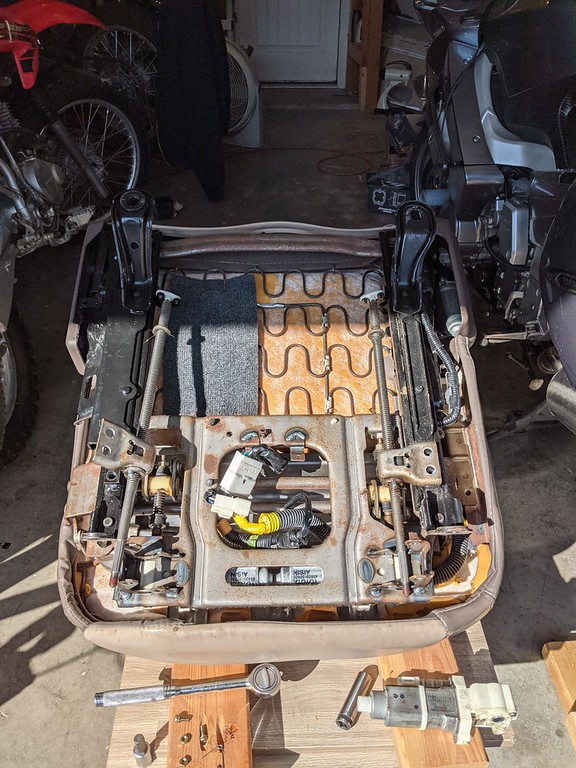 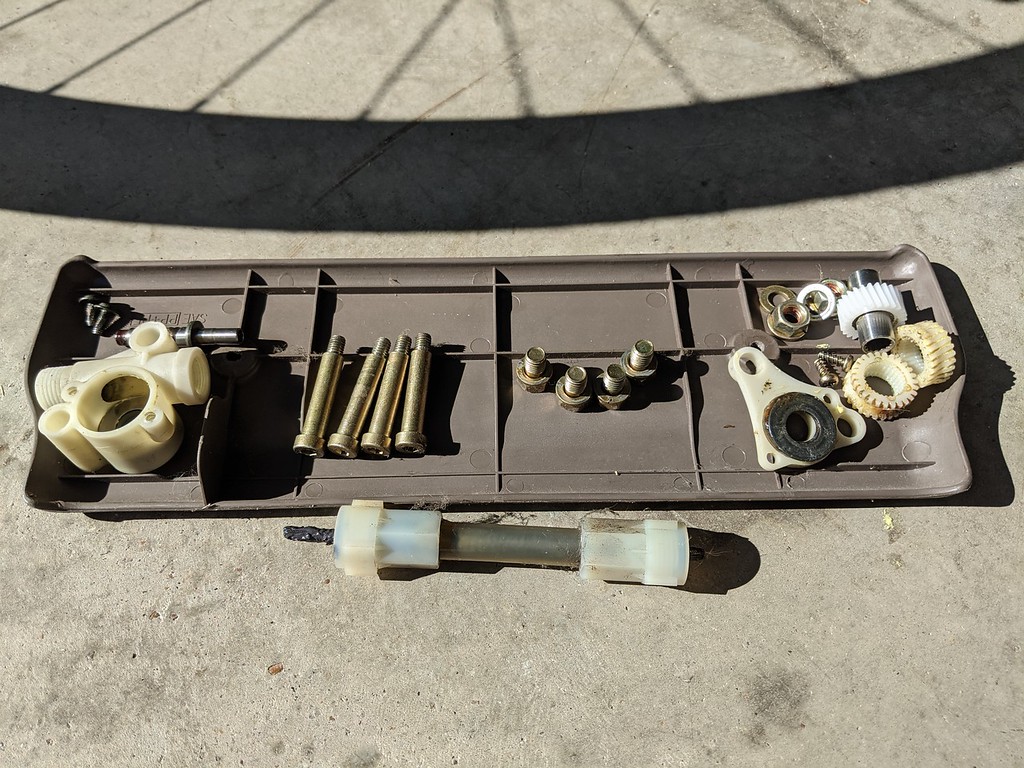 Usually it's just one gear, but both of mine on the passenger side were stripped. Thankfully I ordered enough gears to do both gears on both seats. Here's a new gear next to two worn gears. 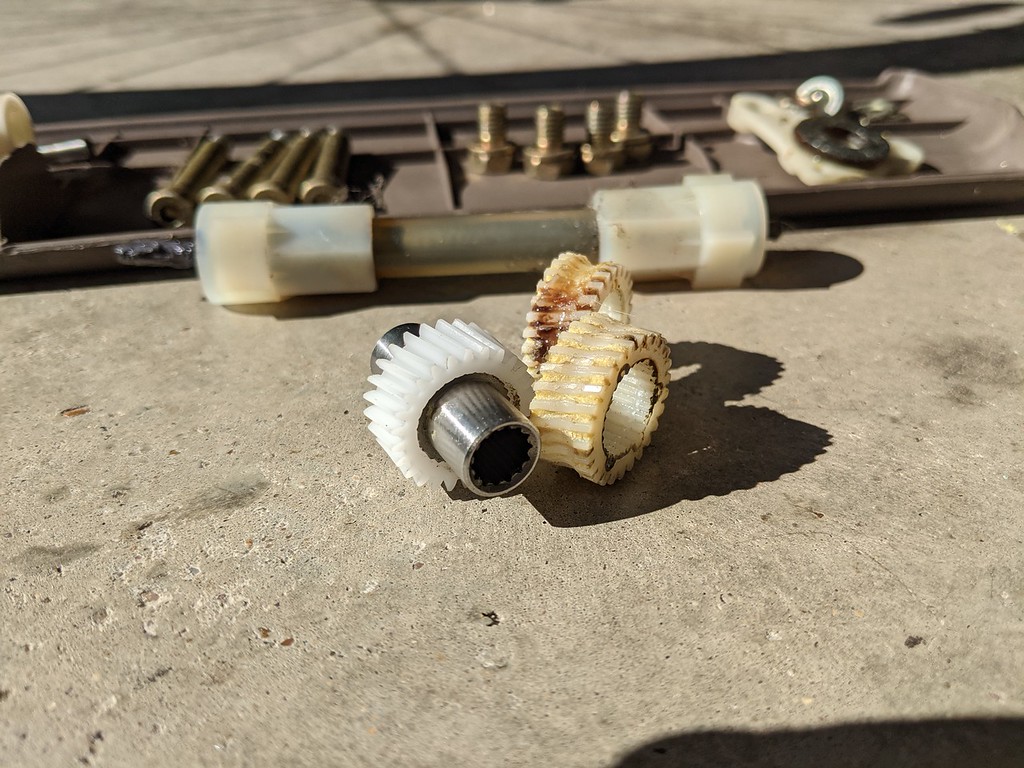 I also took Gamiviti's suggestion to install a set screw to keep the end cap (also provided by Gamiviti in their kit) to keep it from coming out again. It's pretty loose so seemed like a good idea to do it. 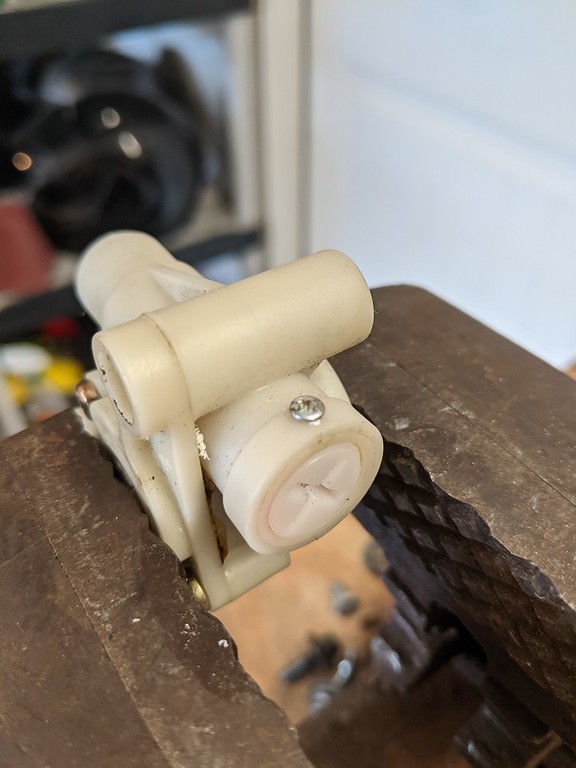 Works like it's supposed to now. Now my son will be happy to have a little more legroom when he rides again.

I'm pretty much an expert on this process now so the drivers seat will be easy next weekend. See, I was putting in the last screw in the front trim piece when the screw slipped out and went down into the seat. As I was fishing it out, there was a washer in there next to it. I started looking over my work and it looks like one of the washer's I installed on the drive shaft came off while I was fiddling getting the motor on. Had to take it all apart again to get that washer back in there. I was kind of glad that I dropped that screw actually.

Then I rearranged things in the garage so I could get the GSX-S out and go for a rip. Beautiful day for a ride.

Nice work Jasen! I got a short rip in on the SMR and Diana's SD. 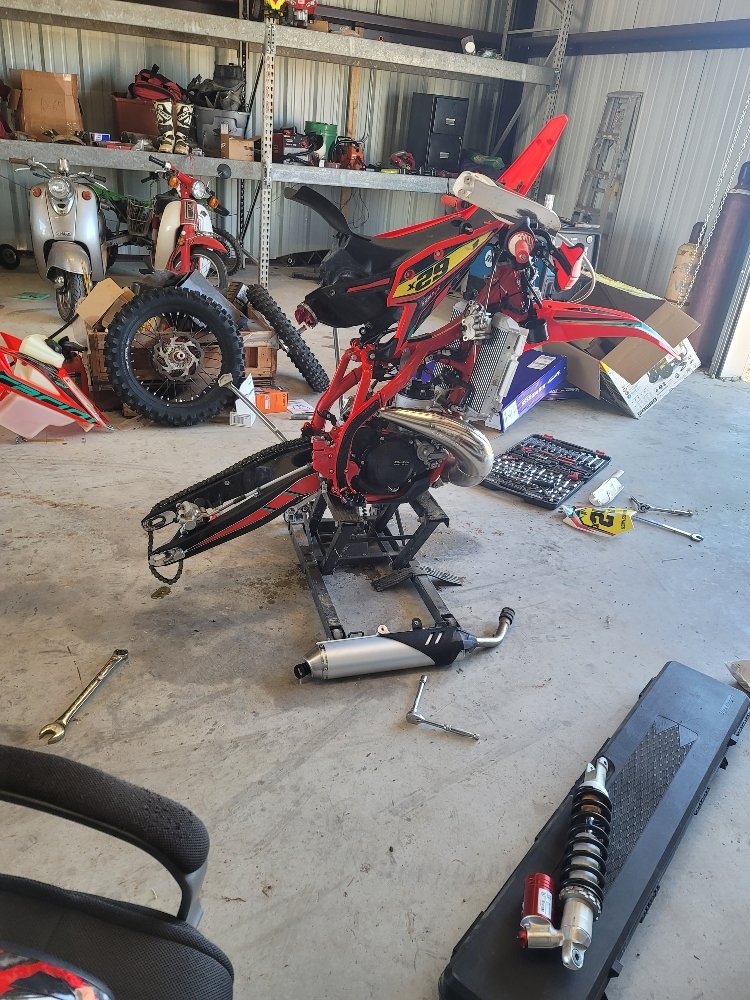 Suspension head out on trip to spa for a makeover?

Since the previous owners hacked up the stock radio spot I decided to just shove one of my commercial Motorolas in there. Need to get a trim ring made up for it. 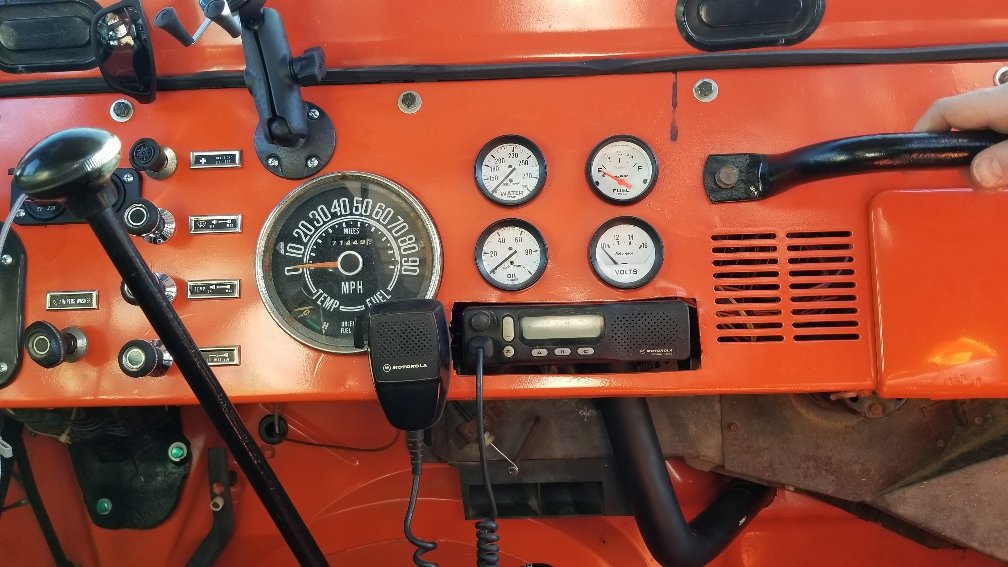 Sent from my SM-G892A using Tapatalk

Got the valve cover down on the KZ. I love ebay. Got this long tap cheap. Cut the stripped 6mm threads to 1/4-28 and didn't even have to take off the valve cover 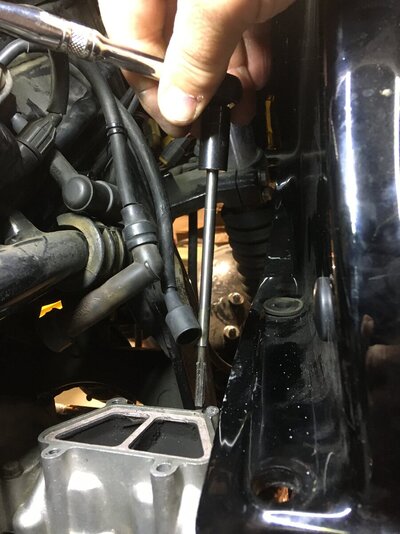 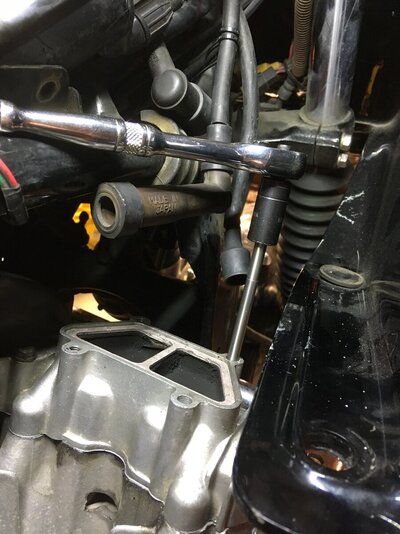 Got the carbs back together too. Found the cold start problem - nearly all bowls had passage clogged. some very hard orings on what looked like a fairly freshly kitted carb. The hard rings were not part of carb kit, but I had bought them separately. Also installed 6 Sigma jet kit. 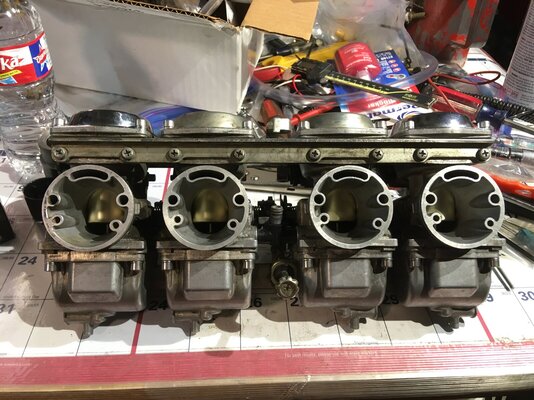 Not my garage, but it is my stuff. 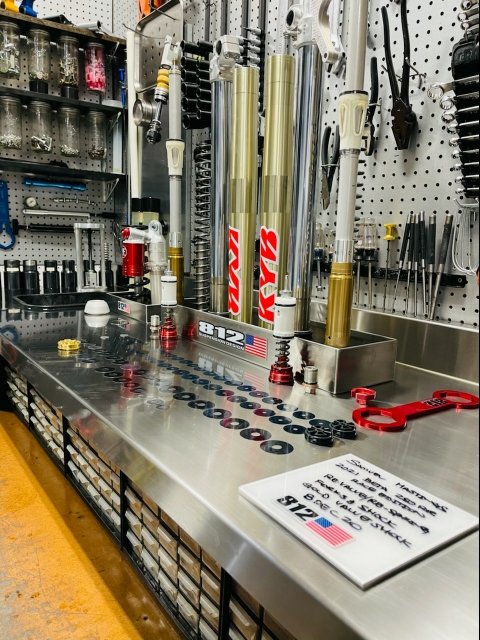 I somehow missed that the race edition Beta had KYB suspension.

bwdmax said:
I somehow missed that the race edition Beta had KYB suspension.
Click to expand...

Yep! A big part of the price tag. Shock is still sachs. Mine is getting a gold valve

I got gold valves.

Sent from my SM-G892U using Tapatalk 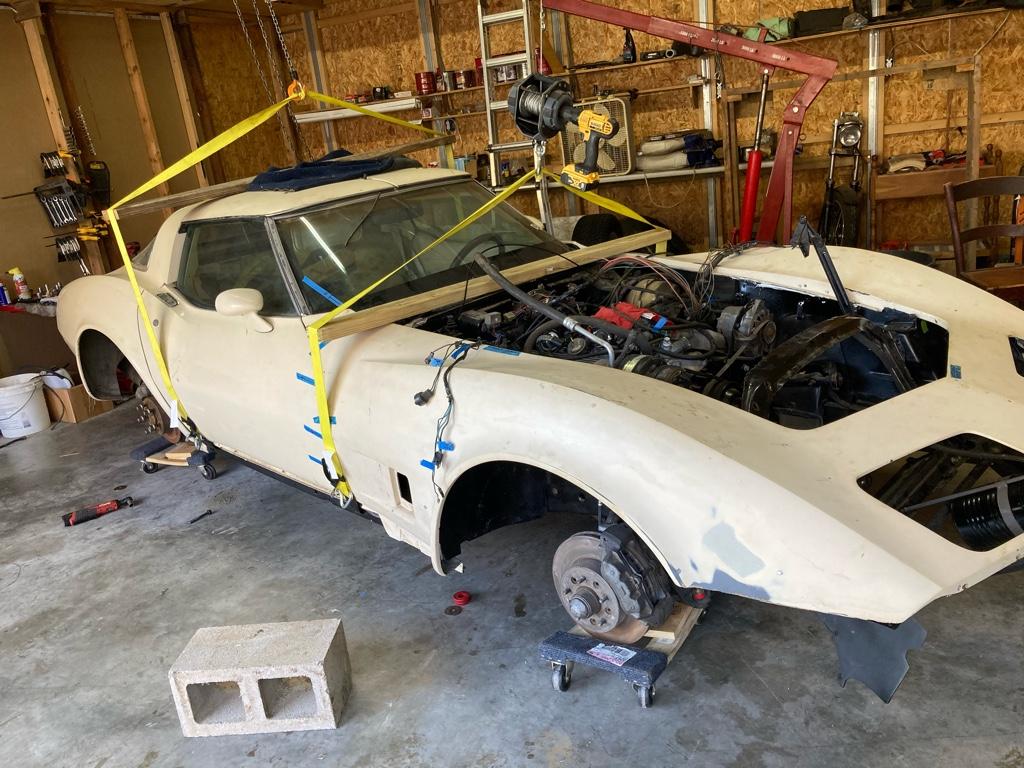 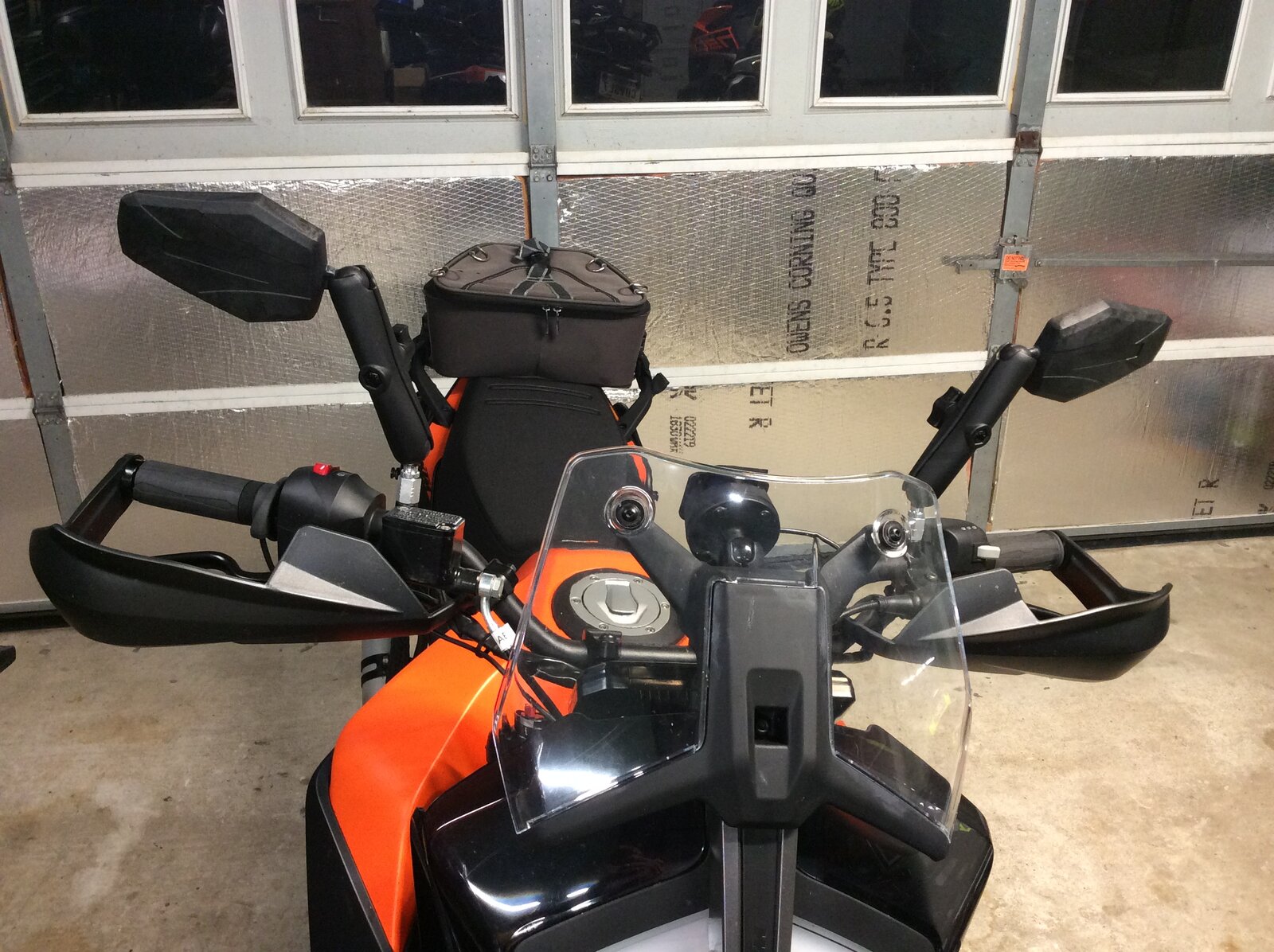 Myself and a few guys went in and bought a no-mar tire changing machine.


Eh, it’s ok. Still had to use my Baja no pinch tool 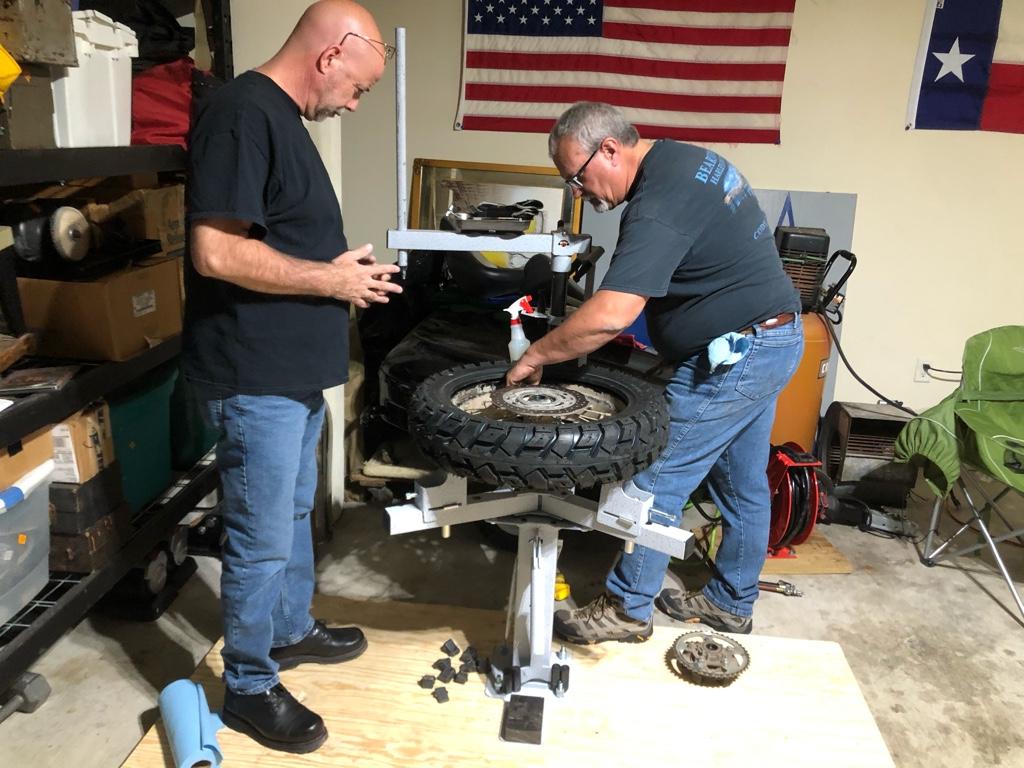 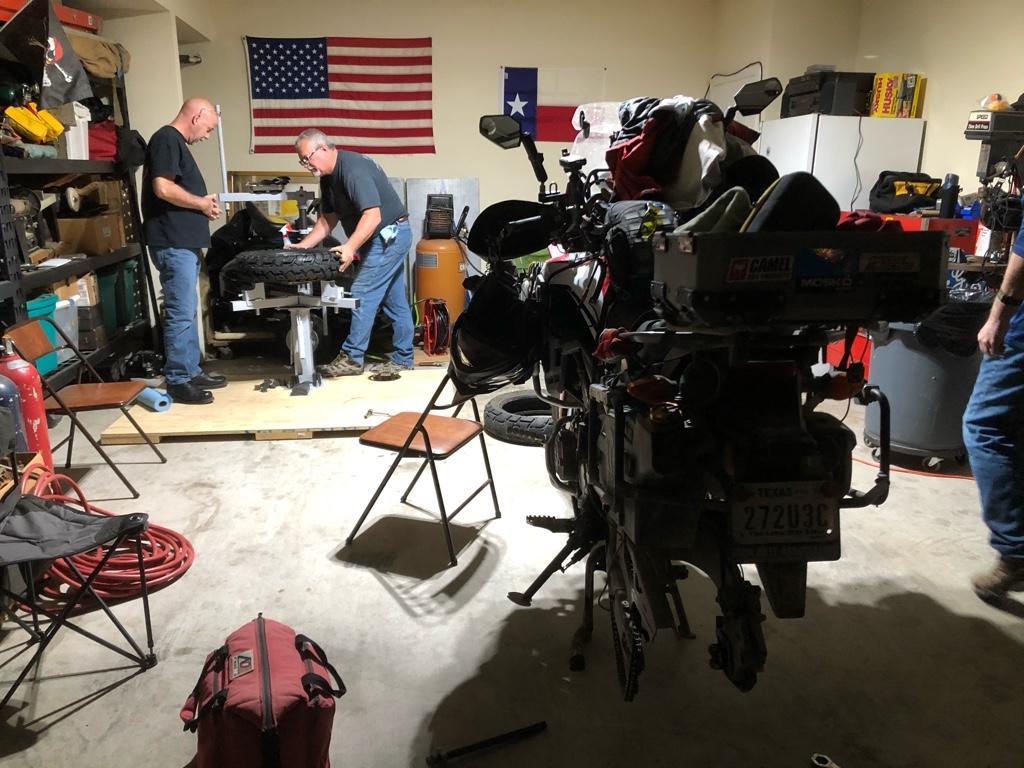 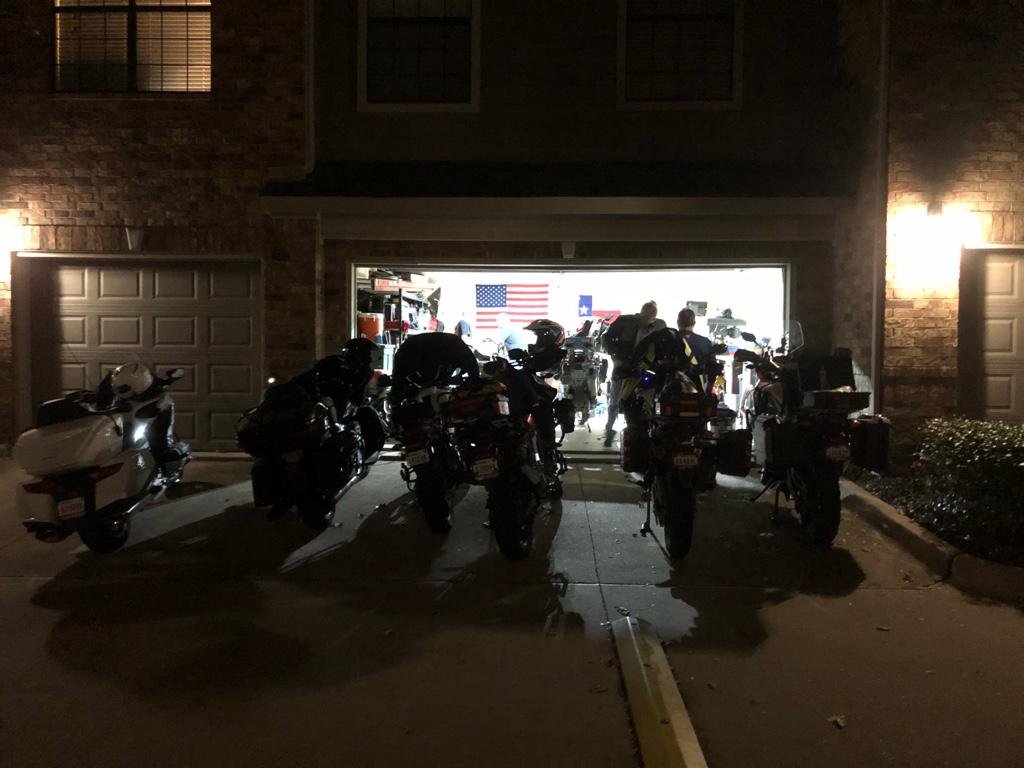